The duration of a Tour of Duty is 2 weeks. When the Tour ends, the next one begins immediately with new rewards. To receive the new rewards, players need to earn Points again because all progress accumulated during the previous Tour is reset.

Progression: a clan’s progress in a Tour of Duty. Progression depends on the Tour Points that are earned by all clan members. Players can receive Bounties for Tour Progression.

Tasks: personal missions for a clan member. For completing Tasks, a player receives Contribution Points and Tour Points. Tasks can be completed multiple times. To receive new Tasks, a player needs to complete all available Tasks as many times as possible. Players can get new Tasks once a day.

Tour Objectives: common missions for all clan members. A clan earns Tour Points for completing Tour Objectives. Objectives can be completed multiple times. They reset daily, regardless whether they were completed or not.

Rewards: in-game content that a player receives for a certain number of Contribution Points.

Bounties: in-game content that clan members receive for Tour Progression. Bounties are more valuable than Rewards for Personal Contribution. They are awarded only to players whose clan earned enough Tour Points and whose Personal Contribution matches the required value to receive them.

There are two progress bars in Tours of Duty:

To view the Personal Contribution and Progression:

The number of Contribution Points you've earned since the beginning of the Tour of Duty.

The number of Tour Points your clan has earned since the beginning of the Tour of Duty.

Your Personal Contribution towards your clan's Tour Points.

Your clan's Tour Points that exceed your Personal Contribution.

Your clan’s Progression depends on the number of

For the achievements of a clan in Progression, clan members receive Bounties, which are more valuable in comparison with Rewards for Personal Contribution.

There are two types of missions in Tours of Duty:

Current missions are displayed in the Tour of Duty block in the CLAN tab. 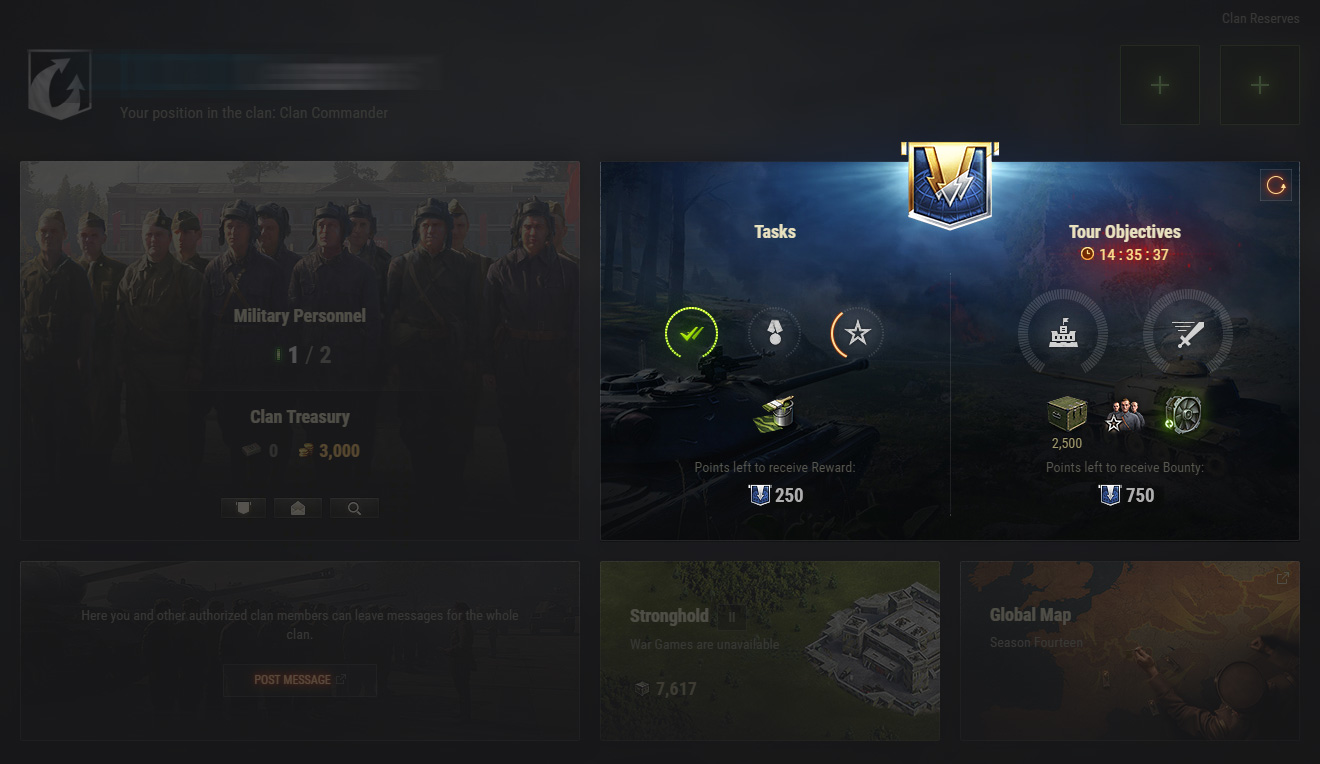 To get detailed information about Tasks and Tour Objectives:

Tasks and Tour Objectives become unavailable after you earn the maximum number of Contribution and Tour Points. New Tasks and Objectives will appear at the start of the next Tour of Duty.

You receive three Tasks when a Tour of Duty starts. Each Task can be completed a certain number of times. You earn Points every time you complete a Task. For completing tasks, you get both Contribution Points and Tour Points.

To receive new Tasks, you need to reach the Repetition Cap of the three available Tasks. Tasks can be received once a day. When a Tour of Duty starts, uncompleted Tasks are also replaced with new Tasks.

If you completed all the current Tasks before the day is over, new Tasks will appear when the next day starts.

If you completed all the current Tasks the day after they were received, then the new Tasks will become available immediately afterward.

If you completed Tasks a few days after they were received, the Tasks of the current day will become available immediately afterward.

If you change clans during a Tour of Duty, your progress towards completing Tasks is saved.

The conditions of Tasks received for different days can be different. However, all players receive the same Tasks for the same day.

Types of Tasks in Tours of Duty

A clan receives two Objectives every day during a Tour of Duty. Each Objective can be completed a certain number of times. As with Tasks, the clan earns Tour Points every time an Objective is completed.

Objectives are common for all clan members. The results of each clan member count towards an Objective’s completion.

Tour Objectives are the same for all clans. They reset daily: new Objectives replace the previous ones regardless of whether they were completed or not. If you complete all Objectives before the end of the day, then you need to wait for the beginning of the next day to receive new Objectives.

For reaching certain values on the progress bars, you earn Rewards for Personal Contribution and Bounties for Progression.

Progress in Tour of Duty allows you to replenish clan Storage with Industrial Resource, which is used to develop Strongholds and prepare clan Reserves. 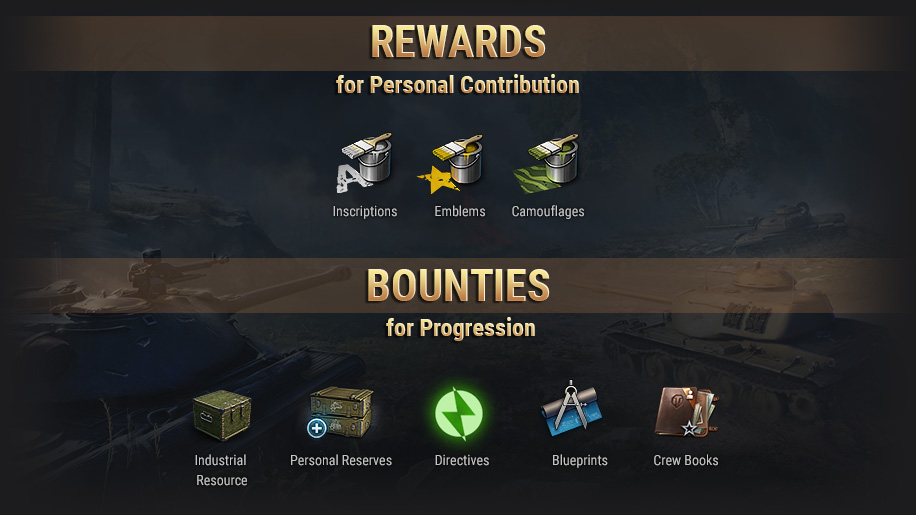 See other sections to learn more about clans.

If you are new to the world of clans, drop into the FAQ section on the Clan Portal where you will learn how to join a clan, create your own, or recruit suitable players.

If you want to receive additional bonuses in battles and participate in War Games, then develop your Stronghold and prepare Clan Reserves.

If you are ready to build solid alliances with other clans, capture new territories, and defend your possessions, try your luck in battles on the Global Map.

May the odds be ever in your favor on the battlefield!