All World of Tanks players can recall a time when a trivial disagreement escalated and spoiled a good time on the battlefield in a matter of seconds, when a battle was forgotten about while players insulted each other or provoked the enemy team into an argument. We call such behavior toxic, and the effect it creates is called toxicity.

Put simply, toxicity is any negative behavior of a player towards other players.

Where Does Toxicity Come From?

World of Tanks is a team-based game. Teams are formed at random, meaning a team can unite people with different social backgrounds, ages, professions, ethnicities, religions—you name it. These differences alone can lead to conflict.

Success in a battle is a team effort. And while there are cases when a surviving player does their best to improve the situation on the battlefield, there can also be cases when another allied player, whose vehicle has already been destroyed, will perceive any mistakes of the surviving player as a personal insult.

Social and psychological differences among players aren’t the only causes of toxicity, though. And along with violations of chat rules, toxicity levels can also increase due to unsportsmanlike conduct (like teamkill, team damage, AFK, etc.), the use of offensive nicknames or clan names, or even the reputations of clans themselves.

Things not related to the game can lead to toxicity, as well. Consider the anonymity of the internet—people realize that nobody online knows their name or background, so they can feel free to do things without taking responsibility for them. Other times, players might not realize that their words or actions can be offensive.

Unfortunately, toxic behavior is the norm for some players. Luckily, there aren’t many of them, and they are fully punished by the rules.

To sum up, the basic causes of toxicity are:

A good atmosphere is vital for a comfortable playing experience. And we do our best to protect our community from toxic players so that anyone, no matter their age or background, can enjoy the game. To achieve this, we combat all forms of toxicity and their causes.

Violating chat rules is the most common breach of game rules.

Messages with excessive profanity and inappropriate language are blocked in the game client by the censor filter. You can switch this filter on in the game settings.

Unfortunately, some players manage to bypass the filter. In this case, the best thing to do is to report such players using the complaint system.

What’s more, you can disable the chat in the game settings. However, in this case, you'll lose the possibility to interact with other players, except for pointing to squares on the minimap.

Unsportsmanlike conduct—like teamkill, team damage, AFK bots, or “pacifism” (lack of action)—is another factor that increases toxicity levels. All such violations are penalized, as well.

Players are penalized for team damage and teamkill automatically, without interference from Player Support. Repeated violations lead to increased penalties—the more often you break the rules, the longer your ban period will be. So before you rush to “teach another player a lesson”, think twice about whether it's really worth it! You risk being deprived of World of Tanks for months, with nobody to blame but yourself.

Starting from Update 1.6, causing damage to allied vehicles in Random Battles is disabled.

We also take action against is botting. Bots are scripts that enable players to save up in-game assets by dishonest means—that is, without playing themselves.

By botting, we also mean players who enter into a battle but don't take any actions in it or immediately quit a recently started battle to enter into another one. The penalty for botting is quite severe—up to a permanent ban.

Thanks to the implementation of a bot detection system, bots have decreased by 80%.

Release 9.3 introduced a system that tracks leaving a battle early (with a vehicle that is still operational) and in-game inactivity. The system displays a message to the player, warning them that they are violating the rules. If the violation is recurring, the player is penalized in credits and XP earned in the battle.

If you come across a “pacifist”, we advise you to restrain from aggressive behavior and angry messages in the chat, and don’t try punishing an unmoving vehicle—you will yourself violate the rules and end up being penalized. There are situations when a player is away from their keyboard due to reasons that are beyond their control, such as a power outage or loss of internet connection. If you want to report the violator, use the complaint system, and we will check out each specific case. 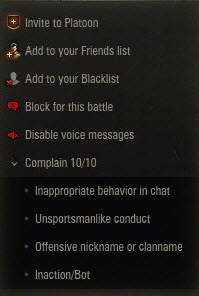 Use of Forbidden Nicknames or Clan Name

Another widespread violation is the use of forbidden words when registering players and clans. Offensive and obscene nicknames are changed by the system automatically and receive a Renamed User mask. A provocative clan name will also be changed, and creators of the clan may be strictly punished with the possibility of a permanent ban. If you come across an inappropriate name or nickname, you can help us detect a violator by reporting them via the "Offensive nickname or clan name" option in the complaint system.

Toxicity levels rise with the excitement around game events and activities, but they can also happen for non-game-related reasons, such as unforeseen personal circumstances or stress.

All violations are regulated by clauses in the End-User License Agreement and the Game Rules—documents that every player is committed to observing.

By violating the rules, you spoil the fun for yourself and for other players. If you come across toxic behavior during a battle, don't be toxic back. Instead, use the complaint system. For more info, see the Complaint System article.

How You Can Help

We want World of Tanks to inspire achievements and success, not discouragement. We do our best to make the game environment enjoyable for everyone, but we can’t achieve this without help from our community.

Every player can help us make World of Tanks even better, and the first step you can take is to be nice and friendly. The more supportive and easy-going the environment, the less tension there is among players, and the more comfortable your battles will be.

Before you start criticizing a novice player, think back to several thousand battles ago when you didn't know those positions, penetration zones, and winning tactics. How about inviting this novice player to a division and helping them learn?

Don't forget that behind game nicknames are real people. We are all different—we have different character traits and tempers, we belong to different social circles, we’re from different parts of the globe—but World of Tanks has brought us all together. Let's treat each other as companions-in-arms, not just pixels on the screen, and you'll see how much more enjoyable a battle can be.