The reporting system allows players to report others without using the longer procedure of contacting Support staff via the portal.

To exclude the possibility of sending multiple unreasonable reports, the system allows only a limited number of complaints per player (five [5] per day).

Unused complaints are not transferred to the next day and cannot be accumulated.

A fully functional complaint system is available on battle screen during ranked battles (everything but training rooms); it is partially available on garage screen. Complaints are submitted by pressing «Ctrl» and right-clicking on a corresponding player in battle screen. Informants may choose from several complaint options in a pop-up context menu. Input fields are not available 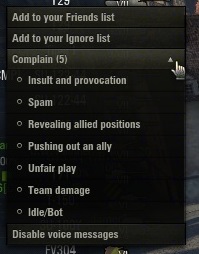 Complaint options, sorted by frequency of use:

A complaint referring to intentional blockings of team vehicles and physics abuse (We still require replays of said violations). Informing enemies of team location and damage conditions is considered to be a violation.

Intentional infliction of damage is tracked automatically. A report would be considered as credible if it points at an obvious team-killer or team-damager in terms of the automated system (if there is no way to check a specific battle).

A player who performs passive play such as loading into a battle and remaining at his spawn point or any player suspected of running automated scripts to play for him.

Multiple complaints against a user for a day are considered as one. Support does not receive entries of the following in the system: "Player John Doe accused Jane Doe of bullying his favourite Tiger.” The review process is statistical and based on the number of complaints on the players account. Complaints are the basis for viewing a user’s logs and handing out sanctions as needed.

Simply put, the complaint review is based on daily, consolidated statistics. Support opens a daily complaint list and by sorting this list will sanction the highest offending players first and continue down the list. Support checks the validity of complaints against a user based on their chat logs. As a result of this operation only users that have been found to be in violation are appropriatly sanctioned and false reports recieve no action.

Note: Foul language complaints in a voice chat are not reviewed.