War Games are a competition among clans in the Stronghold mode. The competition is held during certain periods of time and includes four disciplines. Clans earn points, and the most successful competitors take prize-winning positions and receive clan and personal rewards.

Click WAR GAMES in the upper-left corner of your Stronghold to open the War Games screen. 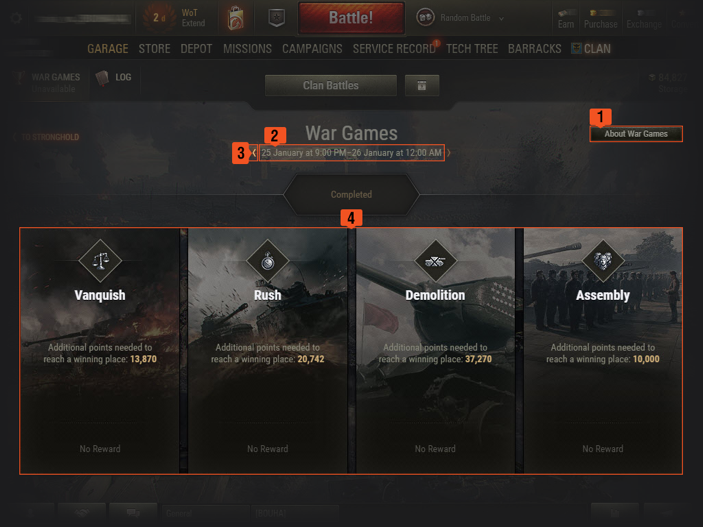 The schedule of upcoming War Games is available right in your game client. Click

(Battle schedule) to the right of the Clan Battles button in your Stronghold, or in the Stronghold: Battles window.

Clans receive points for the difference between the teams’ scores. If the score is not in a clan’s favor, this clan does not receive points.

Both winning and losing battles are counted.

Clans receive points for each second left before the battle time limit is reached.

Only winning battles are counted.

Example. A Skirmish in Division VIII lasted 9 minutes and ended with your victory. Seconds left before the battle time limit is reached: 60 (1 minute).
Points received in Rush: 60 × 2 = 120.
Demolition

Both winning and losing battles are counted.

Clans receive points for each legionnaire in their detachment.

Only winning battles are counted.

Example. During a winning Skirmish in Division VIII, your clan had 3 legionnaires in the detachment.
Points received in Assembly: 3 × 200 = 600.

Clans that earn enough points take prize-winning positions in a discipline. Clans that earn the most points get to the top of the ranking. If several clans receive an equal number of points in Vanquish, Demolition, or Assembly, the clans that have spent less time in battles get the higher positions.

To view a discipline ranking, click the corresponding discipline card on the War Games screen. 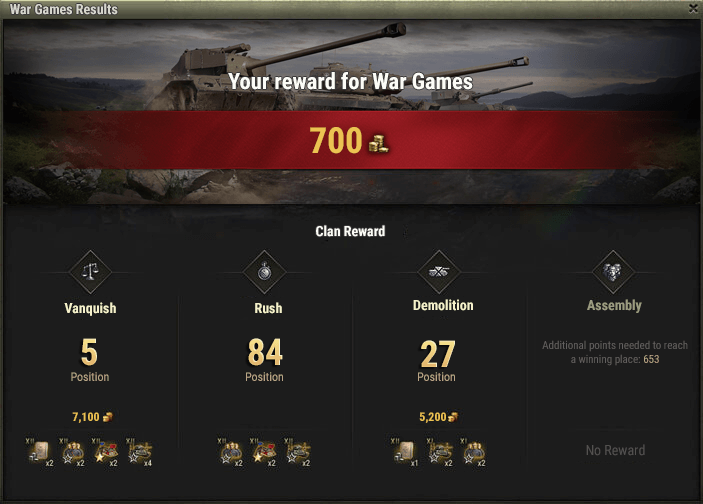 You can earn two types of reward in War Games:

Players receive the personal reward under the following conditions:

Calculation of the Personal Reward

Personal rewards are distributed among players according to their contribution to the competition results. The more points you earn for the clan, the more gold you get.

If players participated in battles for different clans within one discipline, the calculation of gold is done separately for his participation in each clan.

The amount of in-game gold earned by players in battles for one clan within one discipline is calculated using the following formula:

G—the amount of gold a player will receive

TP / TC—the player`s contribution to the competition results, where:

The table shows the number of points earned by the players and their contribution to the battle results.

Calculation of the personal reward of player A.

Player A participated in three battles and earned a total of 1,040 points. The total number of points earned by all players in all battles was 3,120.

Step 1. The contribution of player A to the battle results

Step 2. The preliminary amount of gold received by player A

Only the integral part of the number is taken for further calculations.

The preliminary amount of gold for all other players is calculated according to the same principle.

Step 3. The remaining amount of gold

Step 4. Distribution of the remaining amount of gold between players

It's distributed starting with the player whose contribution is the highest. According to the rating, each member of the detachment receives 1 gold until the remaining amount equals zero.

The personal reward of player A within one discipline:

The amount of gold received for all other members of the detachment is calculated according to the same principle.