With your help, we tested Crew 2.0 on the Sandbox server several months ago. At the time, we received a huge number of questions and comments. After testing ended, we carefully analyzed all your feedback and the statistics we obtained, with particular attention paid to the most controversial aspects that sparked the hottest discussions.

We now invite you to take part in a new Sandbox test and assess the revised Crew 2.0 concept! The test begins on July 20, and each of you will have an opportunity to try out the new ideas and solutions that emerged from your feedback on the first iteration. Join the test, play, and share your impressions—together, we’ll determine the future of the new crew in World of Tanks!

Let's take a look at the main changes to Crew 2.0 compared to the first test and see how we dealt with the biggest issues of the previous iteration.

Thus, after conversion, players will receive a crew that is in no way worse (and often even better) than its old counterpart in terms of combat performance.

A quick reminder: After conversion in the previous system, a player had to distribute Skill Points on their own, investing them in various skills of the Training Plan. Now, the system will do this work for you so that you can jump into battle faster. After conversion, you’ll receive a crew that corresponds to the previous one in terms of the total effects. If you have a few free Points after skill distribution in the new system, you can invest them at your discretion and thereby further strengthen your new crew.

Upon conversion, all effects and bonuses of the old crew will be automatically transferred to the new one, and you’ll be able to enter battle. However, if you want to take full advantage of the new system, you’ll be able to edit the Training Plan of each crew or completely reset all Skill Points for free for the first time after conversion. After the reset, you can redistribute the Skill Points again at your discretion. This will allow you to more efficiently distribute Skill Points of crews in the new system and unlock talents.

The structure of the Training Plan itself has not changed, but we have revised the content of some skills to make it as similar as possible to the current system. For example, the new Safety Measures skill now combines the effects of several old skills at once. Thus, a crew with new skills will not lose its combat performance relative to the old one—it will often be more effective.

As before, it will add 1% to the major qualification of all crew members (except the Commander) for every 10% of the vehicle handling and is rounded up.

The Sixth Sense perk will continue to work for all crews, and you don’t need to train the Triangulation (Sound Detection) skill, which warns you about incoming fire of enemy SPGs. Triangulation will trigger when an enemy SPG fires and will help determine the direction of incoming shots.

This was one of the most discussed topics of the previous Sandbox iteration, so we took your feedback into account and came up with the following solution: When converting an old crew to a new one, there will be no difference between the trained and zero skills when calculating XP. As a result, you’ll receive an Instructor and crew that are equal in combat performance to their current counterparts.

As a result, you’ll be able to train eight skills, which will increase the combat performance of the crew. The amount of experience required to achieve the maximum level has not changed and corresponds to five skills in the current system. Crew progression bonuses (discounts on training, Instructor slot, etc.) are now bound to other levels.

This step puts all players on equal footing—those who previously could speed up training in the Elite Progression (Professional Expertise) using Crew Books with those who didn’t have the opportunity. However, you’ll still be able to use Crew Books to train crews within the Main Progression.

Moreover, after a crew reaches the maximum level in the Main Progression, players will be able to further train the crew using Free XP. This is a valuable game resource that requires a lot of work to be earned in battles, and we want you to be able to use it as you see fit.

We made this decision to balance the increase in crew performance throughout its entire training progression.

First, note that Instructors have been renamed since the first test:

After completing the first iteration of testing, players noted that Instructors received a random set of certifications that were not always needed for a particular crew and did not allow you to significantly enhance a single skill. Now, after converting and assigning a Standard or Valuable Instructor to a crew, you’ll be able to select a certification and nation (if it isn’t predetermined), as well as skills of the selected Training Course. You can change your selection as many times as you like until you click Apply.

You’ll be able to select the skill to which the Instructors will give a bonus within one selected branch of crew training. For example, if you choose the Technical Training certification for an Instructor, the bonus skills can be selected only from this Training Course: Concealment, Quick Repair, etc.

Also, Unique Instructors (which were not available in the game during the first test) will be added. Crews created within partnership programs (e.g., Sabaton, The Offspring, characters from The Boys, etc.) will belong to this category. For them, certifications and skills will still be selected automatically with the bonuses that are most demanded for their vehicle.

The system of receiving bonus Skill Points (provided by Instructors within the selected certification) has also changed. Now, Instructors either give additional Points to a certain skill (if it’s not trained to 10 Points) or increase its maximum level (if it’s trained to Level 10 or higher).

In the new system, a Standard Instructor will occupy one slot, and, in addition to the bonus Skill Points provided, they will increase XP earned by the crew by 10%.

A Valuable Instructor will require two slots. They will increase the XP earned by the crew by 40%.

Finally, crews created within partnership programs will be considered as a single entity: the Unique Instructor. It will occupy 4 slots and increase the XP earned by the crew by 100%.

As with Instructors, directives will also provide additional Skill Points depending on Skill Level. If your current Skill Level is lower than 10, the directive will add +5 Points; if it is equal to or higher than 10, you will increase the maximum skill value by +1.

List of Crew Skills for which directives will be available:

The maximum Skill Level that can be reached with the Instructor and directive bonuses will be 15 Points. All additional Points that your crew receives provide the same skill increase.

Example: a Level 60 crew is retrained to another vehicle for credits without changing the vehicle type. According to the revised Main Progression, the amount of XP required to train a crew from Level 60 to 61 is 112,032. Therefore, the crew will lose 168,048 XP for such an operation.

Join the test and share your feedback on the suggested improvements! Now let's take a quick look at the other mechanics of Crew 2.0 that haven't changed. We’ll also talk about the new features that await you in the second test. Let's start with the feature that players are most interested in: the conversion of old crews into new ones. 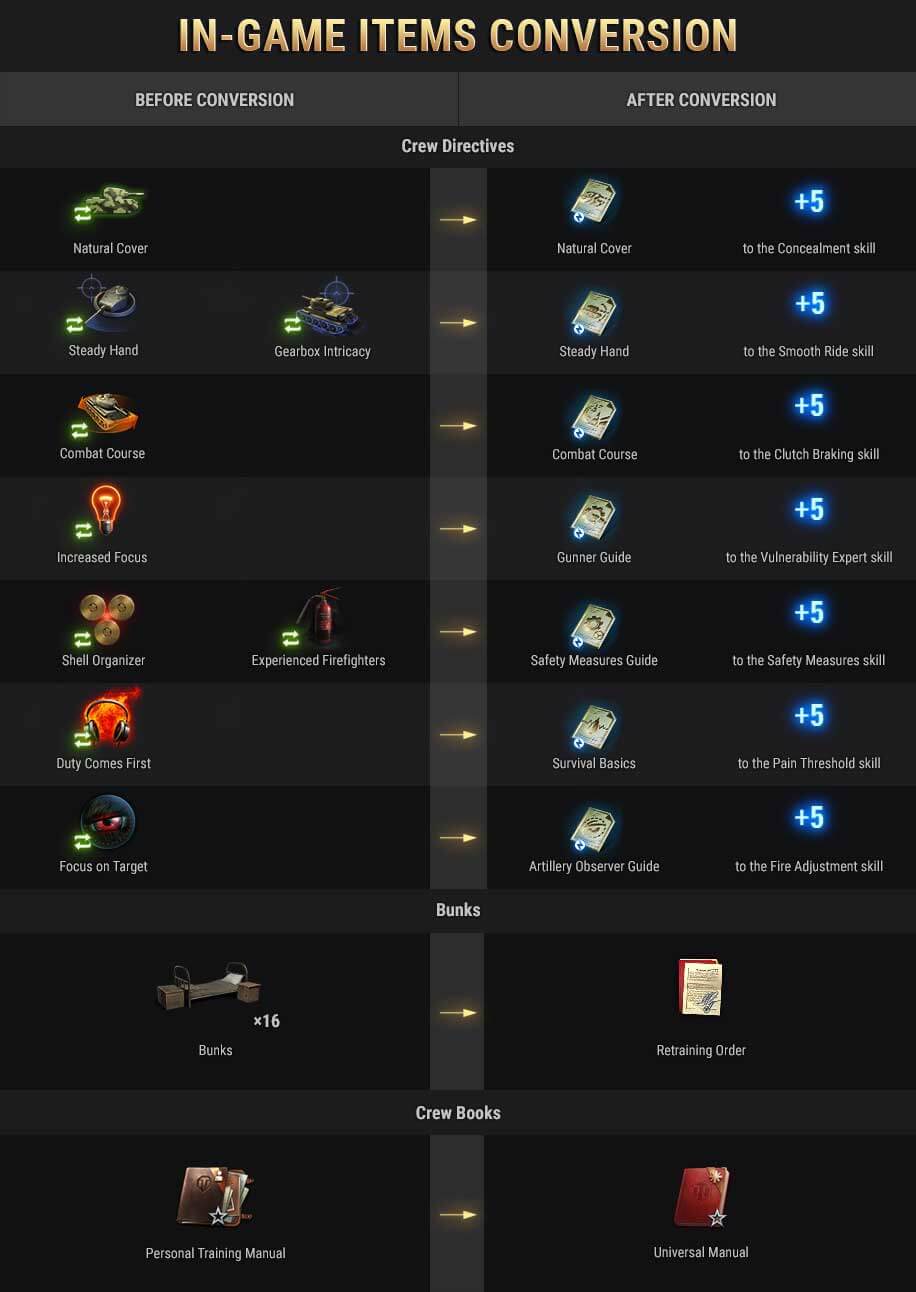 Commander: Face of the Crew

Each crew will have their own Training Plan that contains five Training Courses:

Each course will comprise five skills and two talents. As you earn experience in battles, the crew will increase their Skill Level and receive one Skill Point for this each time. Players will be able to invest it in any of the skills within the Training Plan for free. A maximum of 10 Skill Points can be invested in each skill. Any skill begins to work once you have trained it (i.e., invested at least one Point into the skill).

The maximum Main Progression level that a crew can reach is 80. As the Skill Level and the number of invested Points increase, the battle performance of the crew's vehicle will improve. However, a crew can earn a maximum of 80 Skill Points.

Instructors and directives can add bonus Points to the skill being trained depending on its Skill Level.

To find out the Skill Level of the crew after its conversion, enter the current number of skills or perks and the major qualification level for each crew member, and then click CONVERT CREW.

Interactive image. To find out the level of the crew after its conversion, enter the current number of skills/perks and the major qualification level for each crew member, and then click CONVERT CREW.

Upon reaching Level 80, Skill Points are no longer received, and the Elite Progression (Professional Expertise) will be unlocked for the Commander. With each new level of Professional Expertise, the crew will receive a small increase to vehicle handling. Its maximum value is 15%.

Upon investing 30 Points in a specific Training Course, you will be able to choose one of the two talents available within that course. These are special skills that trigger when a certain situation occurs in battle. Unlike skills, talents become available immediately after being unlocked, and no further investment of Skill Points is required. Skill Points from instructors and directives do not count towards unlocking talents!

If necessary, you can reset all Skill Points or redistribute a part of them again without losing XP that has already been earned by this crew. To do this, players will need to use a Retraining Order or pay a certain number of credits. This will allow you to experiment more freely with various combinations of skills and talents, adjusting the crew to suit your playstyle and selected vehicle.

Note: All numerical values of skill bonuses in the Training Plan are not final and are being tested and adjusted. We continue to evaluate their optimal values, considering the relationship with other game mechanics. We pay close attention to the balancing process, which is still ongoing, and will adjust individual values, if necessary, in the future.

Interactive image. Distribute Skill Points in the table to see the resulting bonuses to technical characteristics. You can also choose up to three Instructors to increase the level of certain skills.

All special crew members (e.g., Snow Maidens or Battle Pass heroes, etc.) will become new characters: Instructors. They will provide additional Skill Points (on top of the 10-point limit) to the crew and increase the XP earned after each battle. Instructors will be displayed in the Garage with a special icon next to the crew image.

Instructors are divided into three classes, depending on their value:

Rewards for Participation in the Test

During the test period, you will have access to special missions on the Sandbox server. For their completion, you’ll receive useful rewards in the main game client. 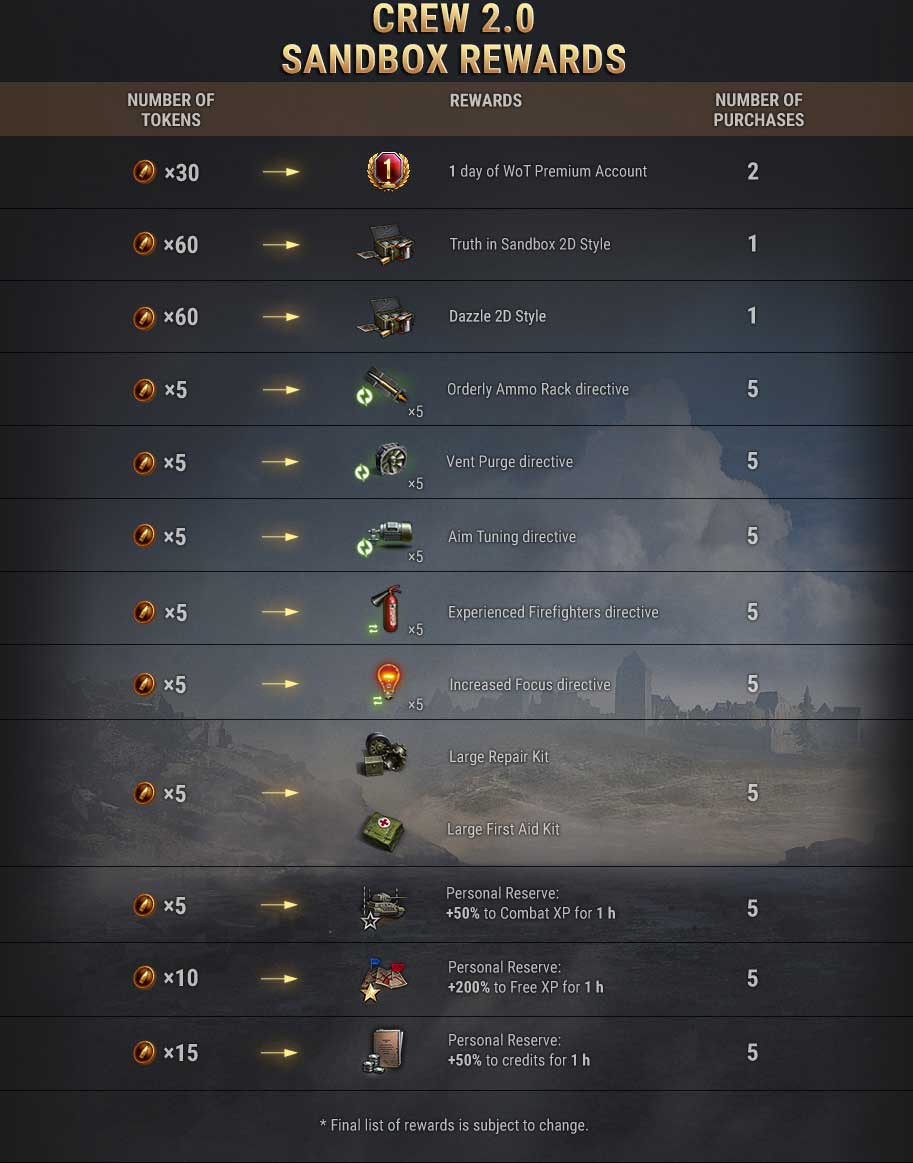 Complete 4 Missions out of 5

Complete 4 Missions out of 5

The cut-off (for game progress, achievements, etc.) was July 4, 2021, except for the in-game currency values—they're the test ones.

Elements of the new crew system in the test, including any numerical values, are not final and may be changed following the results of the test.

All of the improvements mentioned above are a new working concept that needs to be checked and thoroughly tested by players. We really need to collect as much feedback, opinions, and impressions as possible, and we hope you take an active part in the test and make your contribution to the new crew system and how it will be implemented in the game.

Join the test and share your feedback, Commanders! Together we can make World of Tanks even better!