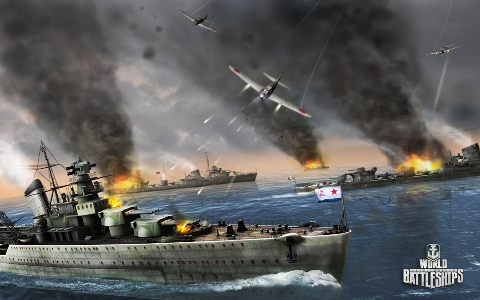 Wargaming.net announces World of Battleships, a free-to-play naval action MMO based on epic sea battles of the 20th century that will complete the “World of” war trilogy.

Keeping with the best traditions of the series, World of Battleships will offer a straightforward interface, easy-to-use controls, and a common economic system that will allow players to distribute resources between the three games for the ultimate progress in each of them.

The large assortment of available warships will give various tactical opportunities, as all the machines have a unique combination of firepower, speed, armor, and endurance. Various naval maps with changing weather conditions will enrich the gameplay, and the realistic graphics will transport players into the epic battles that changed the course of human history.

Wargaming.net CEO Victor Kislyi states: “Humans always needed to conquer the elements — earth, water and air. With World of Tanks, World of Warplanes and World of Battleships we will offer players to conquer all.”

UPD. We are glad to introduce the World of Battleships Exclusive Gamescom Trailer by Wargaming.net! Let's declare naval warfare!