After hours of waiting to check bags, clear security, layovers, missed connections, epic taxi rides, and a great deal of subpar food along the way,  our NA teams arrived in Moscow for Ural Steel 2012! 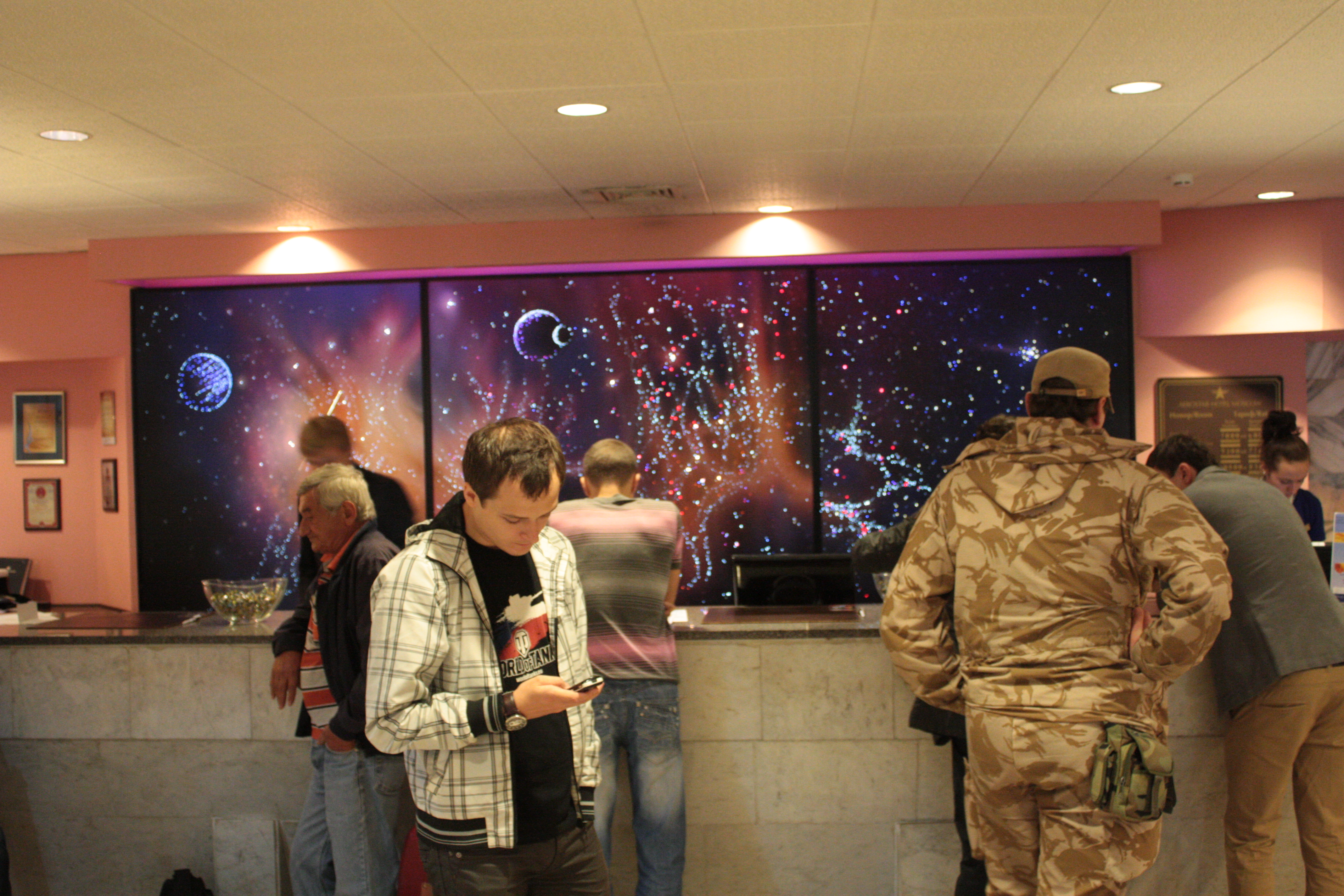 We staggered into the lobby of the Aerostar hotel on Friday evening having left from San Francisco at 2pm on Thursday.  As tired as we were of sitting in cramped seating, standing wasn't a relief.  Sleep, beautiful, sorely missed sleep; in a bed that would hopefully be waiting for me under my name is all I craved.  Lord_farquad had no trouble checking in, and after a half-hour of finagling I was finally granted a room key for the 9th floor.  We scored some high fives and shook a lot of hands of people milling about the lobby, all either Wargaming employees or Ural Steel competitors, before we retired.  I slept like a man whose concerns for the waking world were renounced, forgotten, and fled from, but that's what wake up calls are for.

Hotel breakfast in Moscow: tasty.  Traffic in Moscow: crazy.  What could have been an hour drive out of the urban and into the rural became a multi houred saga.  Our bus driver was a champion.  He swerved around trucks and cars that were foolishly waiting patiently in their deadlocked lanes.  He used the shoulder, split traffic, and sounded his horn with abandon.  We waved at motorists happily disassembling their engines on the side of the road as we made slow but steady progress. 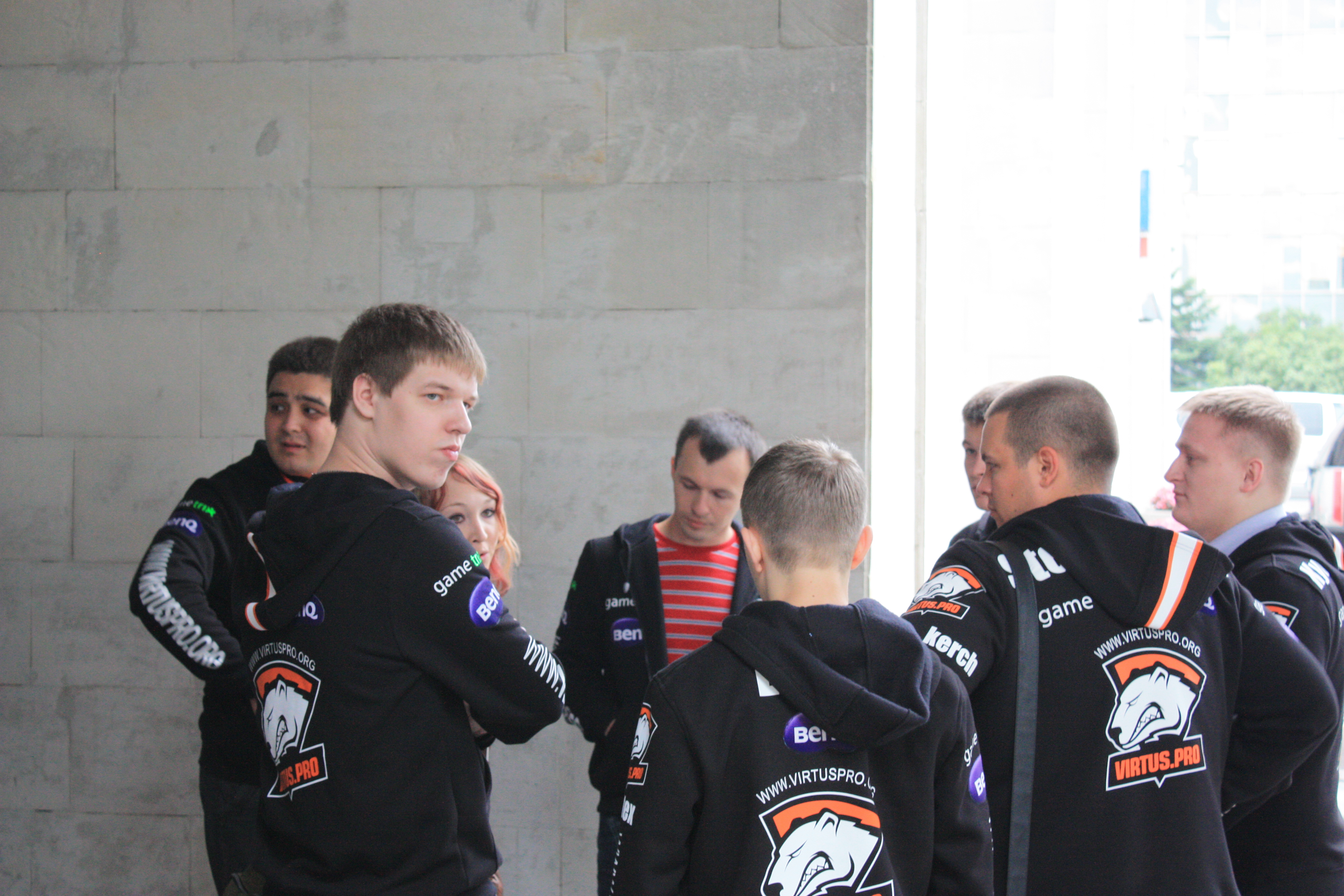 One of the teams from the RU cluster mad-dogging us as we got on the bus for Kubinka.  I kid, I kid, everyone was amazingly friendly.

Lord_farquad got away from us, but I stuck it out with the NA teams for the ride over.  I sat in between -G-Banned Angels and War & Peace.  The conversation varied wildly.  There were references to Farva's mother, to retaliatory garden lighting, how many hours Yankee had been awake, what the going price of melons were, and an endless stream of amusing tank puns.  Spirits were high. 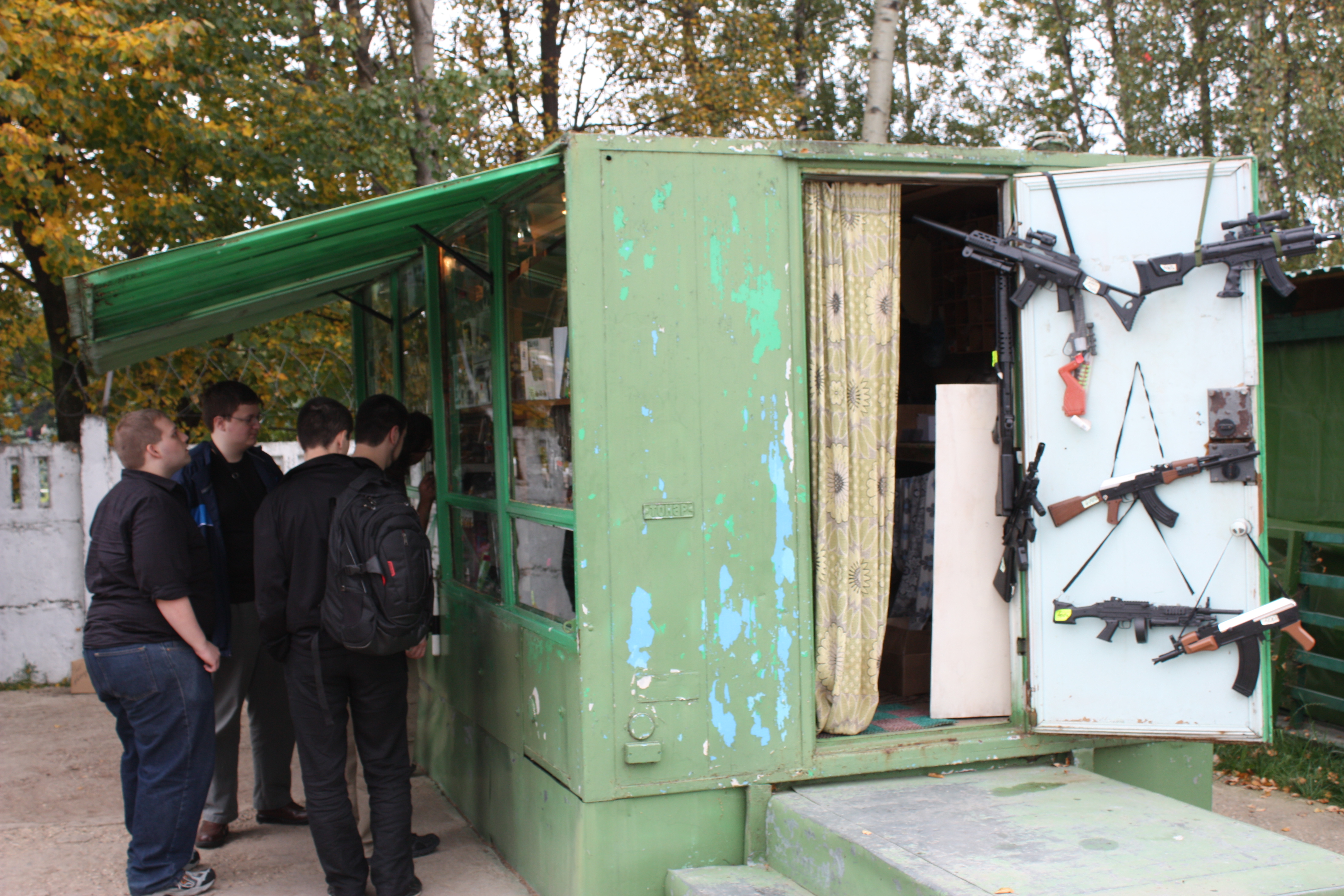 Arrival at Kubinka was heartwarming.  All these middle-aged and young men piled out of the bus grinning like idiot children, myself included.

There was merch to be had, and we had it.  Airsoft guns, tank mugs, hats, shirts, some of which even had World of Tanks logos emblazoned on them.  Tank museum, tank game, tank enthusiasts, World of Tanks goods...it made sense.

We were lucky.  We had a tour guide lined up, but that didn't stop us from prancing around the entrance area gawking at all the tanks set up outside.

We were told the tour would take roughly two to three hours depending on how many questions we asked, so we were advised to make use of the facilities before we got started.  I believe the only person that dared brave the porta-potties was our integration manager.  Most of us just folded our arms and shook our heads.

Even with the overcast skies and the threat of rain, nothing was going to stop us from enjoying ourselves.  Once the tour guide showed up, a very knowledeable dude named Anton, we made our way to the Russian heavy armor pavillion.

The grounds of Kabinka consist of two rows of very long hangars full of tank candy, a long unmaintained fountain, some very nicely trimmed grassy areas, and a sound system that chortles out some very patriotic sounding music.  There's an on-site cafe and a small picnic area where we eventually took our lunch.

Anton knew seemingly everything there was to know about every tank at the museum.  He spoke some english, but we put the NA integration manager to work as a translator so Anton could go into great detail. 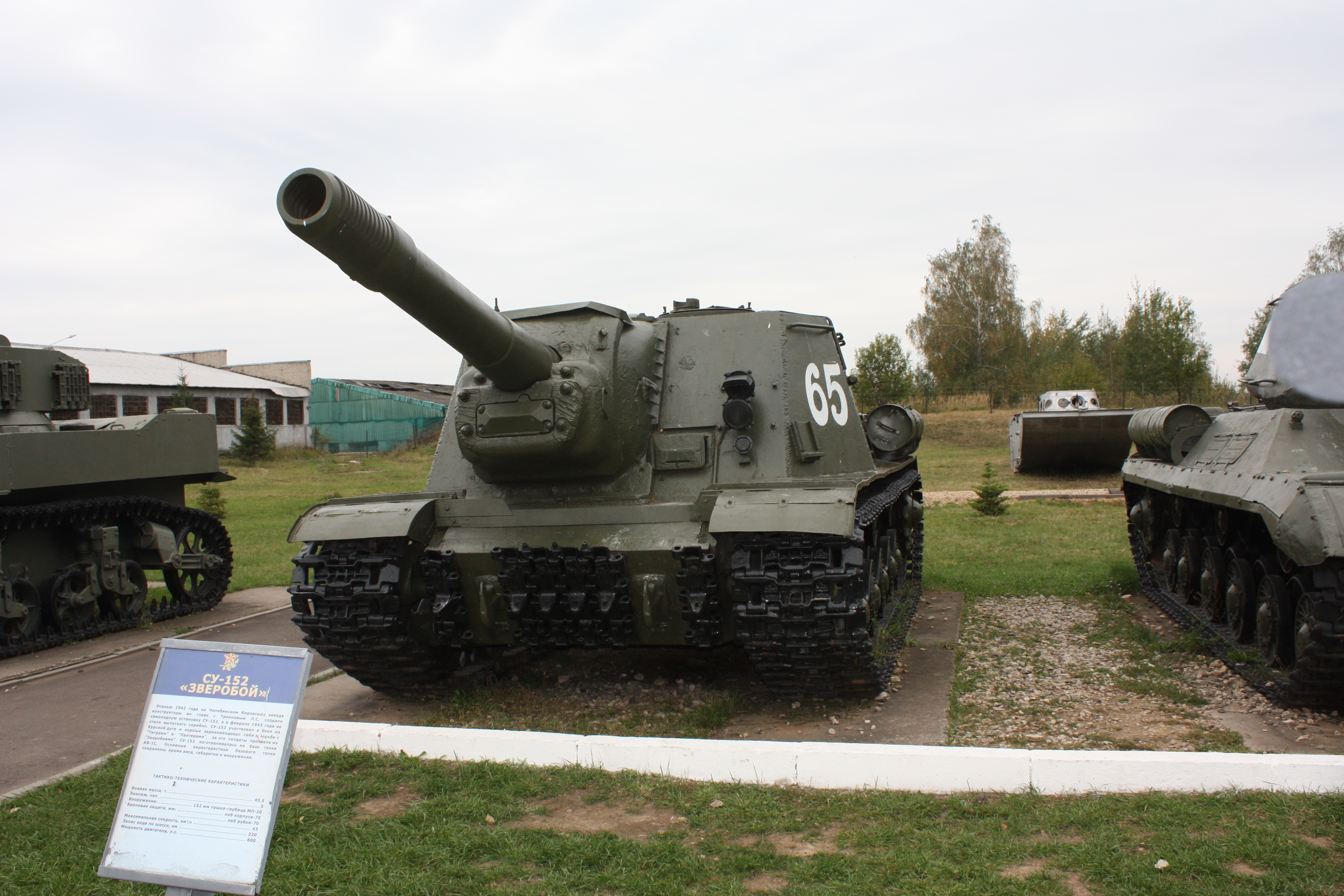 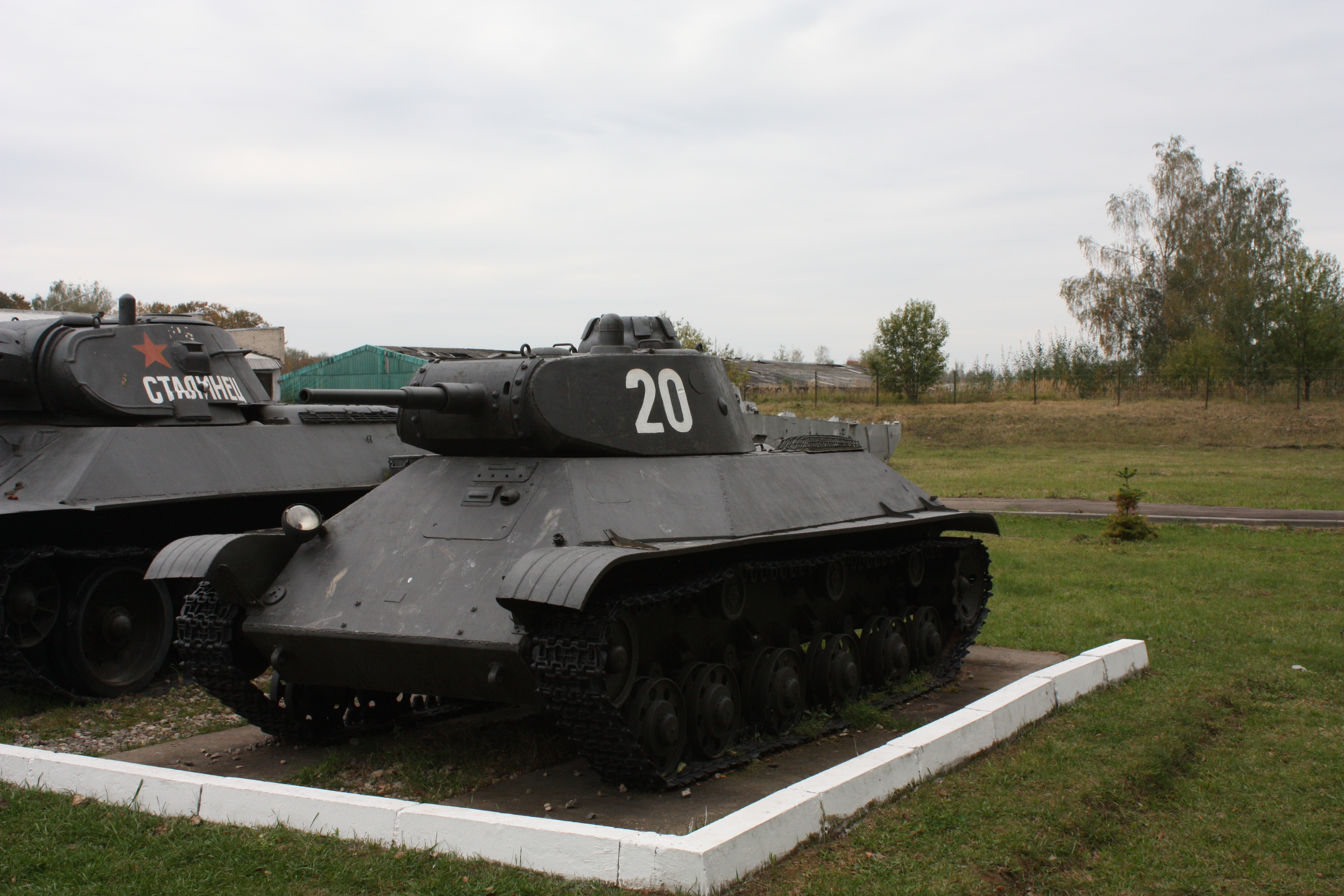 We pestered him with questions, to which he seemingly always had an answer.  When the guys weren’t asking about the real tanks they were probing for information about the game, and any upcoming changes.  I can’t speak for the other Wargaming employees in our group, but I divulged nothing even after insultingly low bribes were made.

We scouted the heavy and medium tanks, light tanks, spgs, and tank destroyers from Russia, Germany, France, Great Britain, and America.  Who knew that Tigers and Shermans were that freakin’ big?  Not me.  Oh, and the devs should probably look at resizing the Hetzer, that thing feels so small in game, but it wasn’t the case when standing in front of it.  The Maus though?  I don’t know that any game can really do it justice.  It’s big.

I whined and griped until all of our teams took a few minutes to pose for a group shot at a tank of their choice. 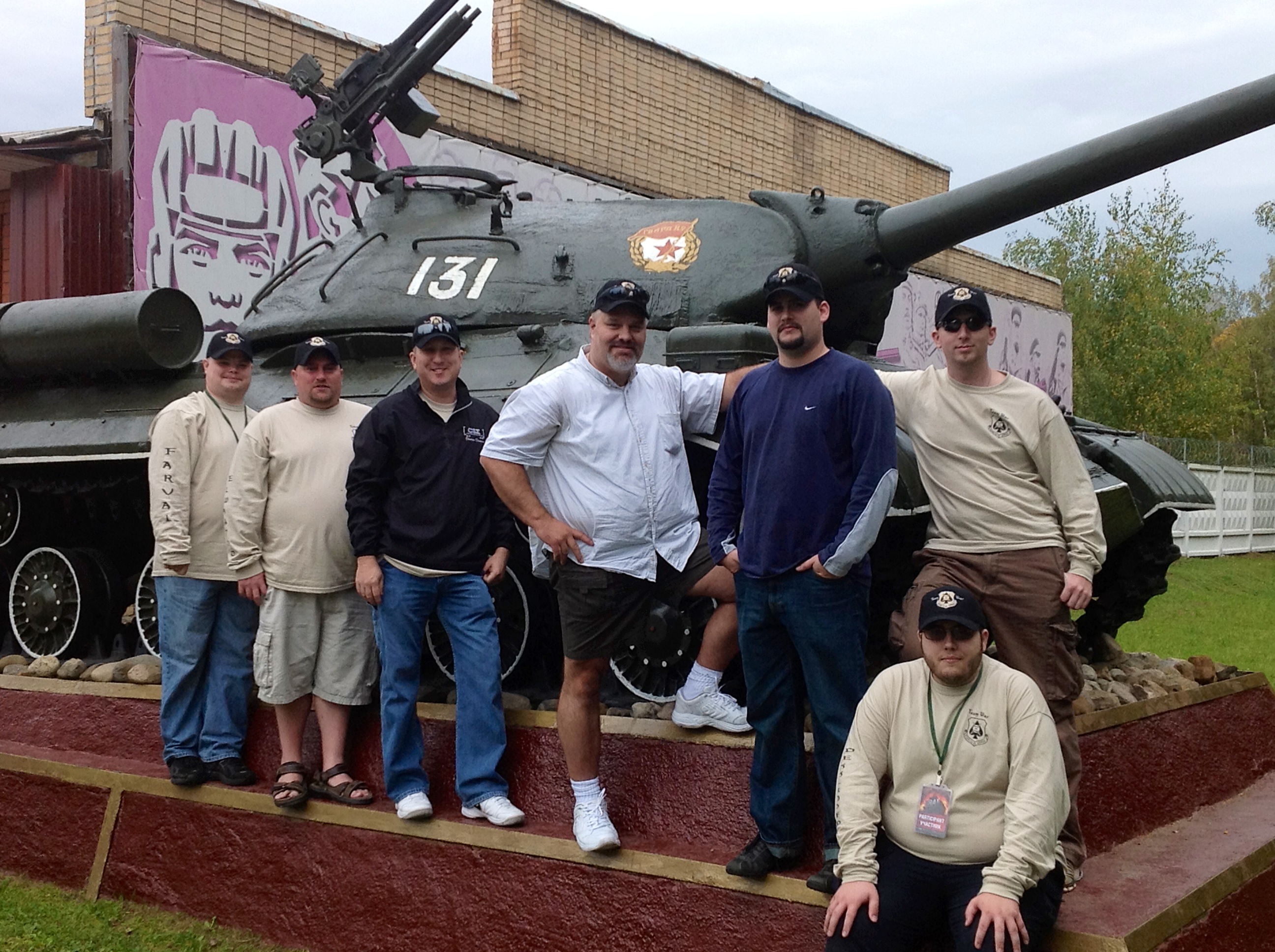 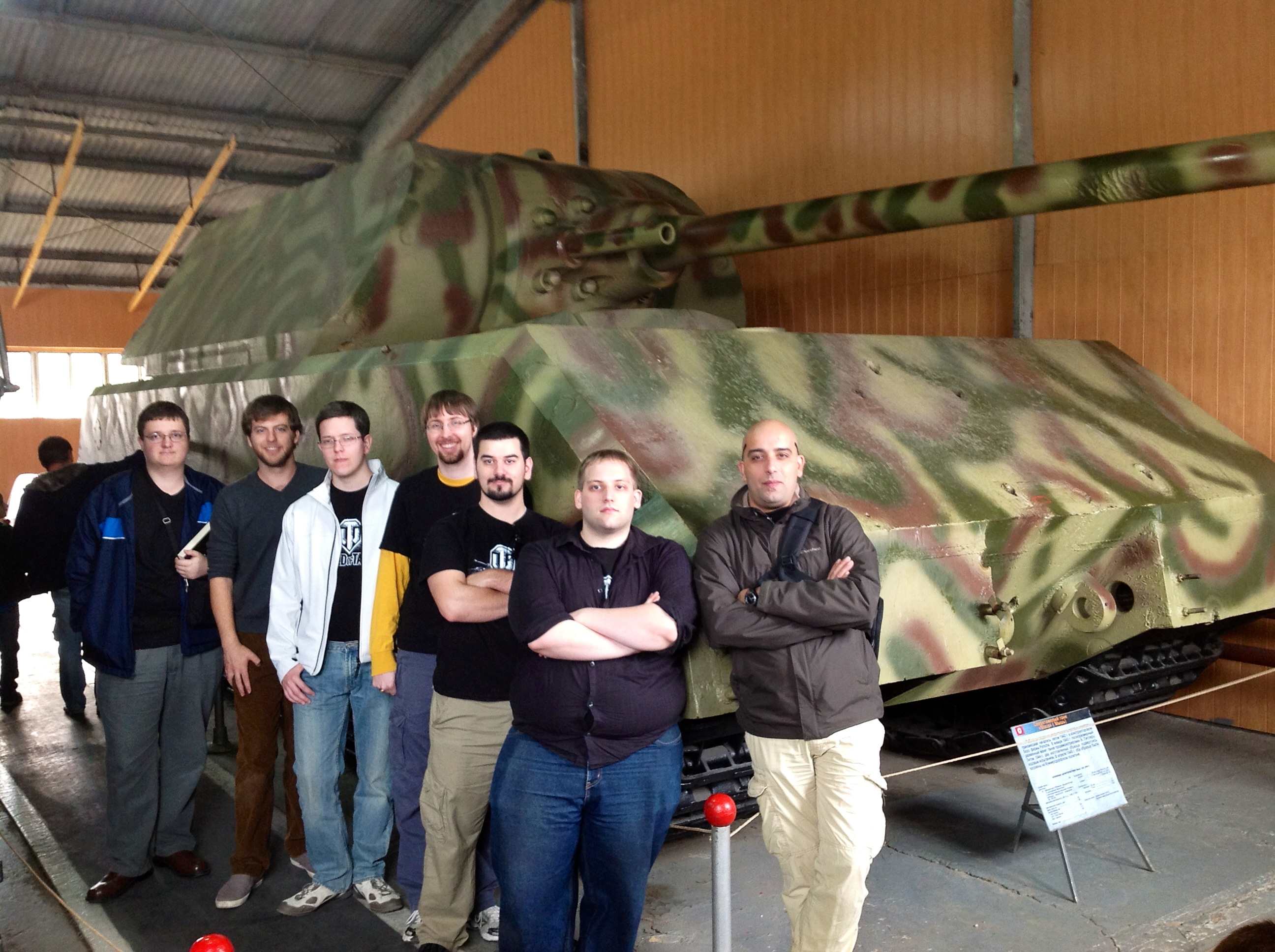 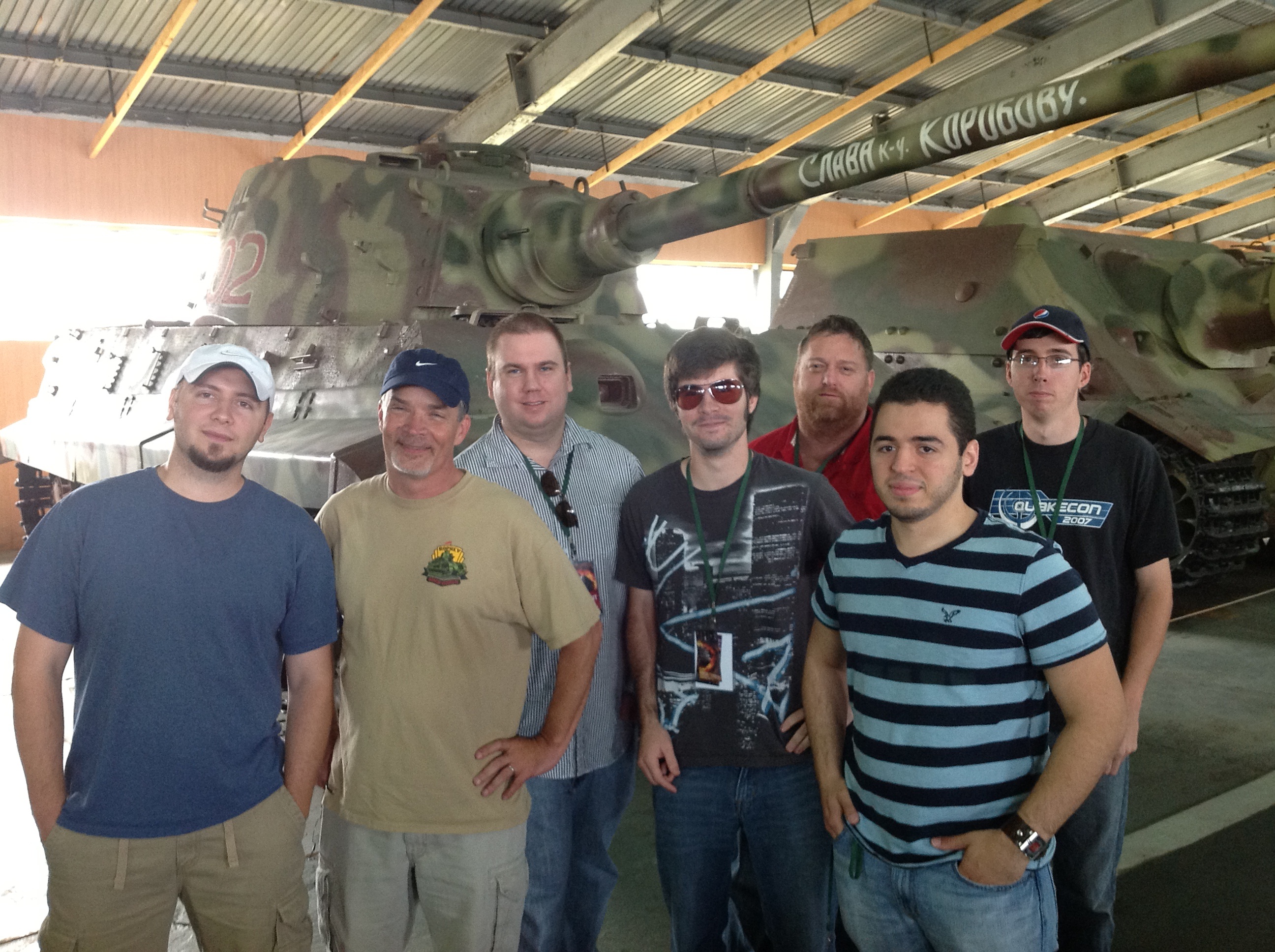 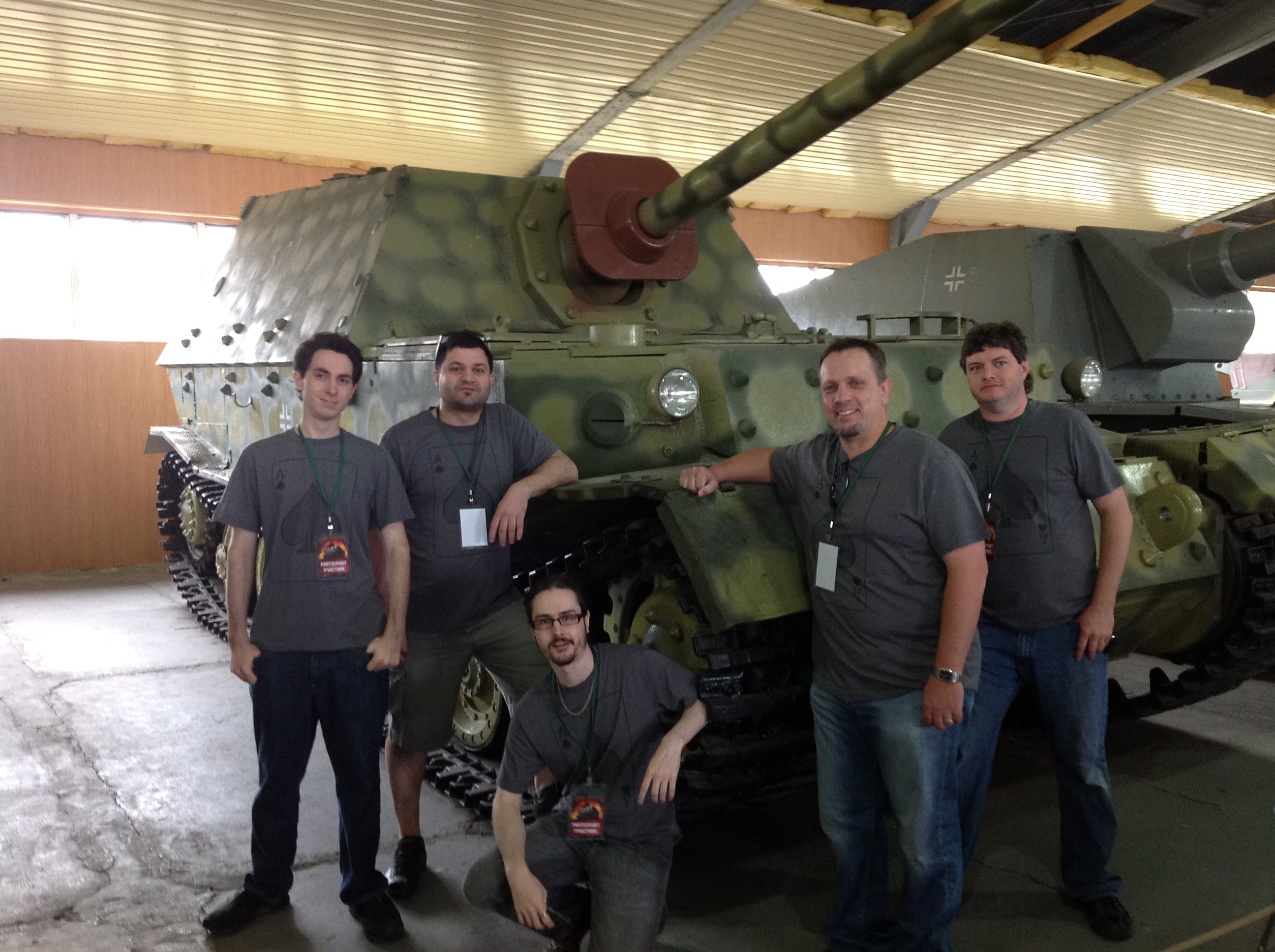 We took our lunch at the small picnic area at the museum grounds.  The food was spare but filling.  Kasha and pickles, it was awesome.  For those of you interested in Kasha, here’s a recipe.  We jokingly said it was what the chow must have been for Russian soldiers during WWII.

We loaded back up on the bus; the chatter was significantly reduced for the return trip.  Instead, fifteen minutes in, the cherub faces of spent man-babies snored peacefully with their heads against the glass.  I followed suit.

I awoke when our bus dropped us at the convention center where a dinner was waiting for us.  More kasha, but this time delicious Russian potatoes, salad, beef, chicken, and fish to go along with it.  Weird fruit drink, and juice boxes to drink, and we were all happy campers.

Immediately after the meal concluded it was time to settle some tournament business.  The team leaders all gathered in an unlit ante-chamber at the convention center while everyone else went back to the hotel.  Four immense glass chalices stood on a low table.  Each contained four large silver balls.  One at a time, the team leaders drew out a ball and opened it to reveal which group they were in for the first round. 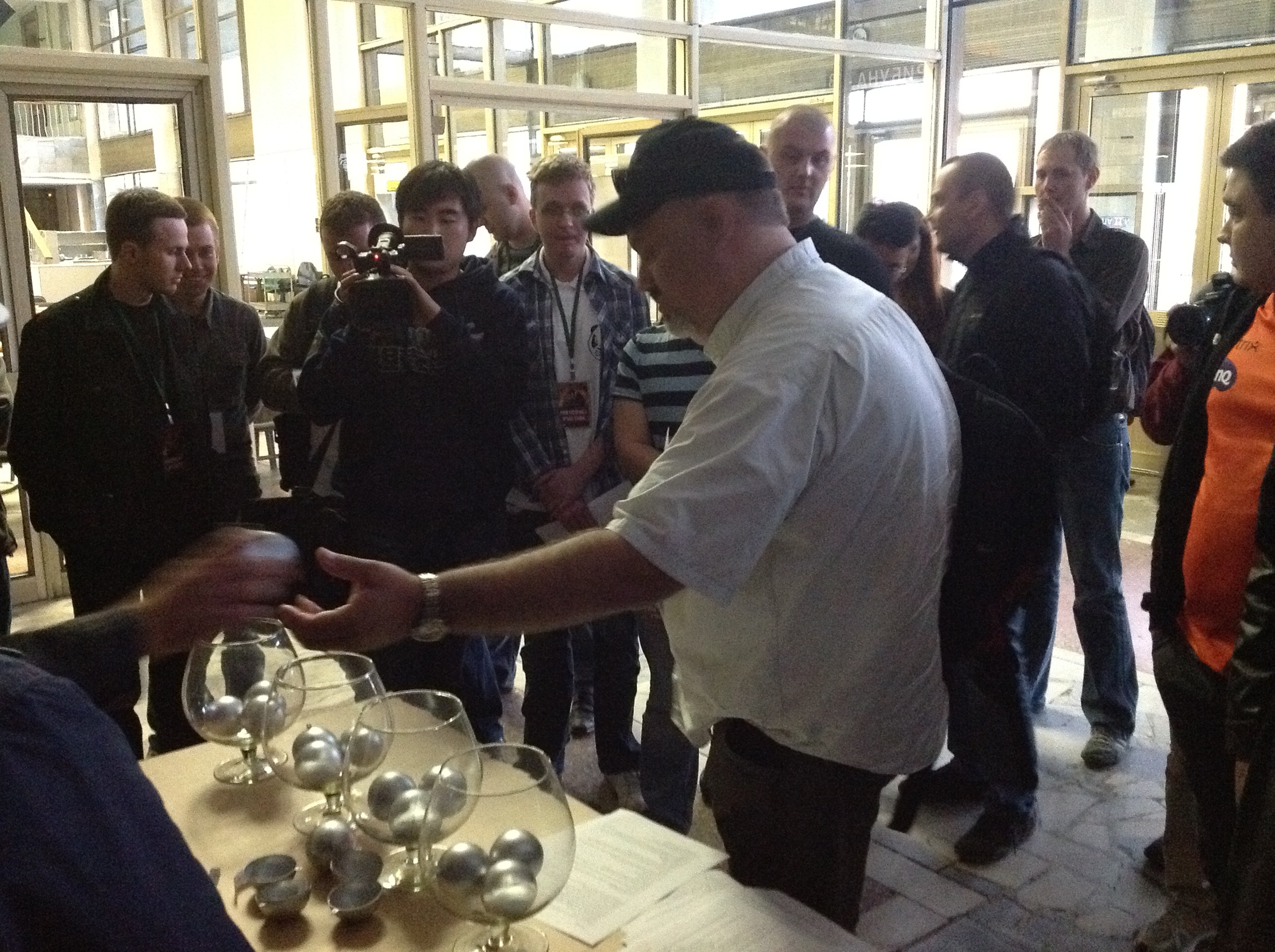 Patreal2000 draws for his battle group.

With the schedule made the captains eyed one another, but didn’t say much.  They shook hands, nodded, and went their separate ways.

Tomorrow we’ll see what shakes out.