Ah, that crisp, fresh smell of a new World of Tanks update. We have a lot of fun new additons to the game this go-around, including a no-nonsense suite of new content such as vehicles and maps, and some fun new additions to gameplay. Let's look at the highlights in Update 9.5!

A Trio of New Maps!

Say hello to Mittengard, Ghost Town, and Winterberg (a snowy version of Ruinberg). These maps add to an already varied rotation, and should provide a few opportunities to refresh your strategic thinking.

The U.K. vehicle catalog is getting a new branch of tanks and tank destroyers. If you're a fan of the Brits, put these beasts on your progression plan! 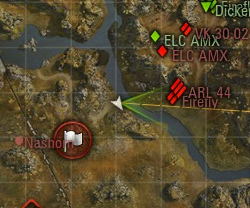 The in-battle minimap is getting some new, super helpful built-in features that will no doubt give you a leg up in strategy and general awareness of battle flow.

These new map settings are available in all game modes, and can be toggled in the Settings menu under the General tab, so check there first to customize the minimap to your liking!

After holding the Public Test, the development team is taking an extra bit of time to work on some features previously seen there. Look for the following in upcoming iterations of this update:

Personal Missions: A new type of challenge players can access via the Missions and Specials button in the Garage. Personal Missions are a form of missions that aren't time-limited and are "chained" together. Players will receive special rewards like high-tier vehicles or special crew members.

The nitty-gritty details of this update are available below! Just click "Expand:"

Other Bugfixes and Changes