The Japanese Tiger: Victim of Circumstance

As an island nation, Japan’s highest priorities for research in World War II were its navy and aviation industries. The army was large, but its military equipment could not match rival European counterparts who had stronger ground forces. Japan did not use heavy tanks, and an examination of the most advanced mass-produced Japanese vehicle—the Type 97 Chi-Ha—shows it lighter, smaller and with worse armament than its contemporaries: the Soviet T-34, German Pz.Kpfw IV and US M4 Sherman.

An Empire in Danger

The reason that Japan did not develop heavier tanks was not the result of military incompetence, but rather of logistics. Japan was fighting for control of small Pacific islands. All vehicles and equipment had to be transported by sea, onto island terrain not suitable for using heavy vehicles; where designs were concerned, lighter was better! At the time, China, the only major mainland rival of Japan, did not have good armor or anti-armor capabilities, so the existing Japanese vehicles were deemed acceptable for the task at hand.

On December 7, 1941, Japan bombed Pearl Harbor and went to war with the USA. They achieved several early victories, invading the Philippines, multiple islands of Oceania, and part of New Guinea. The Allies were hard-pressed to keep up.
During their domination in the Pacific region, the Japanese created a defensive perimeter using islands as strongholds. The Americans and other allied forces began to hit back. In June 1942, the Japanese lost four aircraft carriers during the Battle of Midway, and US forces slugged it out for six months during the Battle of Guadalcanal before emerging victorious in February 1943. Similar to Stalingrad in the East, these two battles deprived Japan of the strategic initiative, and their defensive perimeter fell under attack, island by island. The Allied forces were nearing the Japanese Home Islands. 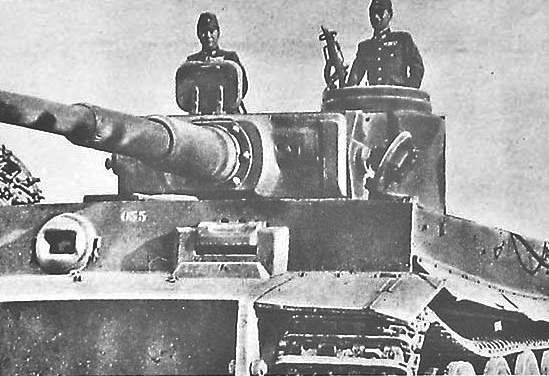 German propaganda picture with the Japanese soldiers in the "Tiger".

This shift forced Japanese military leaders to face the threat of a potential US invasion. To stand against US tanks, Japan needed heavy tanks which were still in the design stage; they looked to their German allies' powerful new tank: the Pz.Kpfw VI Tiger.

A Bargain Buy with no Home

Initially, Germany was happy to respond to the proposal of a fellow Axis power. The Japanese ambassador, Hiroshi Oshima, toured the Kummersdorf facility and viewed production of Tigers, getting up close and personal with them. Oshima was thrilled with the idea and entered into negotiations with the German Ministry of Armaments to procure some.

In 1943, Germany sent Japan two packages of technical documentation, and Japan wanted to purchase the tank. The cost to produce a Tiger was around 300,000 Reichsmarks in 1943, while the Ministry of Armaments and the Henschel Company requested 645,000 Reichsmarks from the Japanese for a fully loaded tank. The Germans had not simply decided to “cash in” on oversea allies: the cost of technical documentation was also included into the amount; and the tank would be supplied with ammunition, an excellent radio, and optics. Also, Germany was prepared to disassemble and pack the thirty-ton tank for shipment by submarine to Japan.

Japanese submarine aircraft carrier project I-400. Such a ship would've been used to transport the Tiger.

The Allies commanded the Mediterranean Sea and Atlantic, so underwater shipping was the only way to get the Tiger to Japan, but few vessels could carry a 30-ton hull. Submarine aircraft carriers that had corresponding characteristics were not complete, and the Tiger would have trouble reaching Japan. Most optimistic estimates put its arrival in December of 1944.
Despite these difficulties, the tank was sent to a Bordeaux port In February 1944, and the Japanese paid for the order: officially coming into possession of the Tiger, but not able to use or reverse engineer it. With no way to ship it, the tank remained in France until the summer of 1944, when the Allies landed in Normandy and put Germany on the spot.

On September 21 1944, on the authority of the Supreme High Command of the German Army, the Japanese Tiger was leased (or requisitioned, according to other sources) and passed to the field forces where it was lost somewhere on the Western Front.