Czechoslovakia was under German occupation for about six years. During that time, the country's powerful industry had to produce goods for the needs of the German military until the country was defeated by the Allies. After World War II, the Czechs were left with vast design experience and an enormous amount of technical documentation.

The decade following the war was a tough one for Czechoslovakia. Though they tried to re-establish themselves as a major world power in tank building, economic and political climates meant that most projects didn't even leave the prototype stage. However, their designs are notable for how advanced they were, and deserve a second look. One of their proposed projects was the Škoda Т-40 medium tank.

In 1945, the military issued technical requirements for a vehicle called Tank Všeobecného Použití (TVP), or "general purpose tank". As envisioned by the military, this medium tank was supposed to feature armor 65mm thick, mount an 88mm gun and accelerate to 50 km/h. Further upping the ante, a coaxial machine gun with a flame thrower was proposed as additional armament! 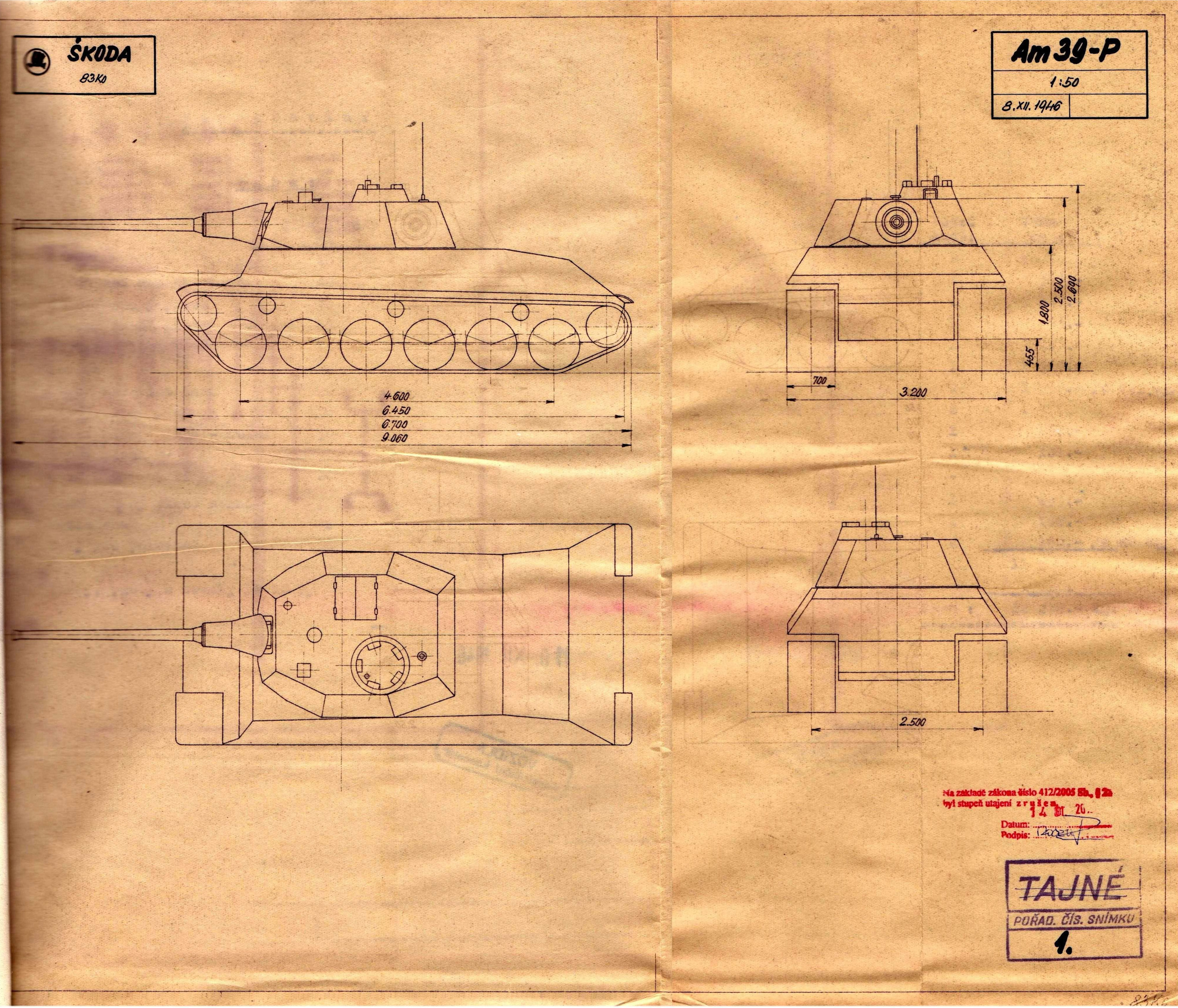 As the Škoda project began, specialists at the VTU (Military Technical University) expended lots of effort to create a different set of tanks. While the VTU project differed from the Škoda design in several ways, historian Martin Dubánek mistakenly included the Škoda project with the VTU designs in his landmark work on Czechoslovakian tank building. This oversight was later identified and corrected by a different Czech historian, Jiří Tintěra. While the VTU and Škoda designs military requirements in common, they followed different paths.

The VTU project and its characteristics were design concepts, rather than a fully realized product. The tank was supposed to feature a leaf spring suspension, six road wheels, and three support rollers, though VTU was not certain which engine should be installed. In contrast, Škoda engineers prepared a complete design and performed the necessary calculations for their medium tank. There were some similarities in external elements and design, but several diffierences remained.

The VTU tank featured a complex turret with a "V"-shaped front plate, while the Škoda Т 40 resembled comparable German vehicles manufactured by Krupp. This was no coincidence --Škoda plants produced hulls and turrets for the Tiger II heavy tank during World War II.

In accordance with the design requirements from the Czech government, engineers chose an 88mm gun similar to the German KwK 36 L/56 gun mounted in the Tiger turret; however, the Czech variant lacked a muzzle brake. The idea of equipping the tank with a flamethrower was eventually dropped, and a coaxial machine gun was mounted instead. The T-40's gun mantlet was similar to mantlets produced by Krupp, and the Germans planned to mount it in the experimental narrow turret of the Panther medium tank.

Unlike the VTU engineers, Škoda did not have any problems with choosing an engine. They had a ready-made solution: the Škoda 16ADH140, a 700 h.p. X-type air-cooled diesel engine. While it didn't meet the military requirements for power-to-weight ratio, the engine's acceleration could bring the tank to the required 50 km/h. A more advanced torsion suspension was used instead of a leaf spring model.

Requirements for the TVP were based on the U.S.S.R. T-34-85, and it was not the best armored vehicle in 1945. Consequently, the main weakness of the Škoda Т 40 (and TVP) was in its armor. On the flip side, the Škoda specialists were very innovative: they didn't copy Soviet or German technical solutions, instead synthesizing the experience of the two greatest tank-building powers in Europe, ultimately creating a well-balanced, distinctive vehicle.

Though it existed only in blueprints historically, we're working to bring this unseen and unsung design to the battlefield!