One of the winners of our World of Tanks Magazine Readers' Contest is Rick Christie, aka rick1025. He tells us the story of his father's service overseas during World War II and reveals some little-known facts about the role of the Canadian Army in the war. Enjoy!

69 Months Away From Home

My father, Charles Richard Christie, volunteered for service with the Canadian Army immediately after Canada declared war on Germany in September 1939. He joined up in his hometown of Edson, Alberta in the Royal Canadian Engineers. He was subsequently sent to the Loyal Edmonton Regiment (nicknamed "The Loyal Eddies") in Edmonton, Alberta. He was 24, married, and had two daughters when he joined. After completing basic training, he sailed to the United Kingdom and arrived there on New Year's Eve 1939. At that time, the British Army was in Belgium, ready to face off against German forces. The 1st Canadian Division, of which the "Loyal Eddies" were apart of, remained in the UK for further training. 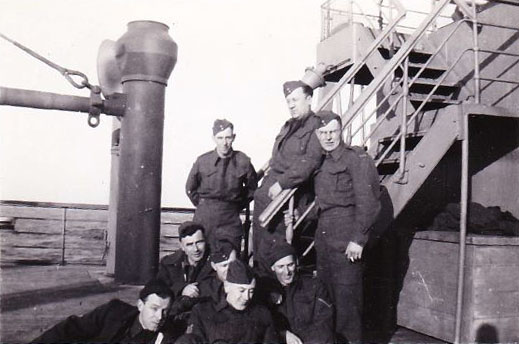 Charles Christie (first row, second from left) with his buddies aboard the troopship en route to England in 1939.

When the Germans attacked Belgium in 1940, it was proposed the Canadian 1st Division travel with the BEF (British Expeditionary Force) to France and fight. However, the speed which the Blitzkrieg trapped the BEF at Dunkirk meant the idea of sending Canadian troops to France was scrapped. After the "Miracle at Dunkirk," the Canadian 1st Division was the only fully equipped and full-strength unit in all of England that remained to face the German Army.

Private Christie was a Bandsman in the Loyal Edmonton Regiment Band. During the Battle of Britain, when the Germans were set to launch "Operation Sea Lion," the invasion of the UK, my father's unit of Band members were called out one night to stand guard at a radar station -- it was rumored there would be a German paratrooper drop on the facility.

The Canadian Army decided to disband the Regimental Bands and set up Corps Bands, so Charles Christie ended up in the Royal Canadian Signal Corps Band, playing second cornet. The Corps Bands entertained the troops, played for dances and provided music for military ceremonies.  Their function was to keep up morale. They could also be called out to act as stretcher bearers (equivalent to a "medic" in the U.S. Army), combat soldiers in emergency situations, or other duties as assigned by the Canadian Army. 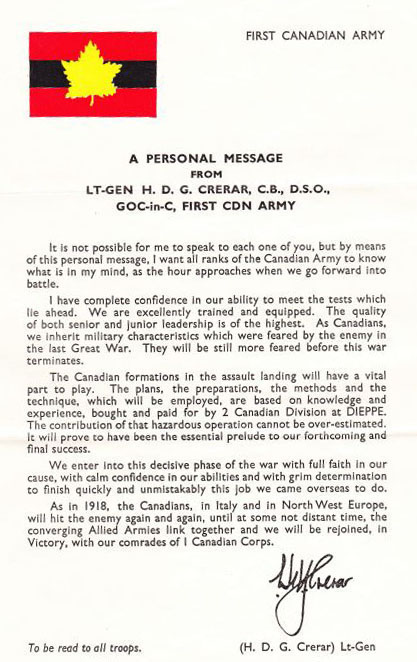 Charles Christie went from England to France after D-Day and moved with the Canadian Army as they cleared the Atlantic ports along the west coasts of France. They then carried on to Belgium and into the Netherlands, where the war ended for Canadians in Europe with Germany's surrender in 1945. The Canadian Army decided to disband the Regimental Bands and set up Corps Bands. Therefore, Charles Christie ended up in the Royal Canadian Signal Corps Band, playing second cornet. The Corps Bands kept up morale by entertaining the troops with music for dances or ceremonies. They could also be called out to act as stretcher bearers (equivalent to a "medic" in the U.S. Army), combat soldiers in emergency situations, or other duties as assigned by the Canadian Army.

On one occasion, the Royal Canadian Signal Corps Band were moving from one location to another towards Belgium, in trucks. During the move, they got a little lost, but after consulting their maps, they found their way. When they reached their destination, a military policeman asked them how they ended up coming "from that direction". When the MP was shown the route taken, the Band found out that they had been travelling through German-controlled territory. Why they weren't shot or captured by the Germans is one of war's little mysteries. Perhaps the Germans thought they were the vanguard of a larger convoy and let them pass in favor of a bigger prize, or perhaps the Germans had already moved on.

My father went to war in September 1939, and returned home to Canada in February of 1946. He served 69 months without ever coming home during the entire war. When Canadians volunteered, they served for the duration.

Download the World of Tanks Magazine and enjoy even more stories about military history, technology and great heroes of the past!