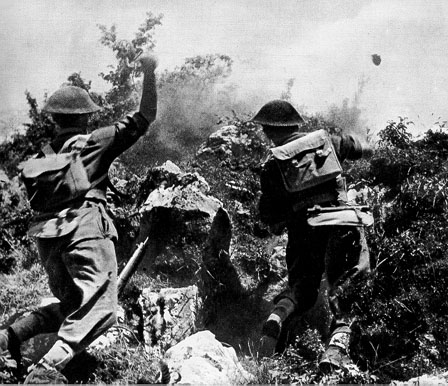 The Monte cassino campaign was a series of four battles that took place between January and May of 1944.

The Germans held a line in central Italy just south of Rome. This defensive network was called the Gustav Line.  The Germans held the peaks and ridges overlooking the valleys that approached Rome.

The Campaign was named after the hill top abbey of Monte Cassino which was founded in AD 524 by Benedict of Nursia.  The abbey commanded a view of the town of Cassino as well as the entrances to the Liri and Rapido valleys.

After repeated attempts by the combined forces British X Corp, the American II Corp and French Expeditionary Corp to break the defenses over a 3 day period, they were forced to withdraw with heavy casualties.

The second battle took place in February and was hastily prepared.  The Allied forces moved in again and suffered tremendous losses due largely to artillery fire in the valleys and town.

Increasingly, the gaze of certain Allied officers became fixed on the great abbey of Monte Cassino; in their view it was the abbey—and its presumed use as a German artillery observation point—that prevented the breach of the ‘Gustav Line'.

On February 11, 1944, the acting commander of 4th Indian Division, Brigadier Harry Dimoline, requested the bombing of the abbey of Monte Cassino.

Destruction of the Abbey

The bombing mission in the morning of February 15, 1944 involved 142 B-17 Flying Fortresses together with 47 B-25 Mitchell and 40 B-26 Marauder medium bombers. In all they dropped 1,150 tons of high explosives and incendiary bombs on the abbey, reducing the entire top of Monte Cassino to a smoking mass of rubble.

The Germans have always denied having military personnel inside the abbey except for a few military police.  General Kesselring specifically ordered the defensive line not include the sacred abbey.

Pope Pius the XII was silent after the bombing.  However, one of his cardinals bluntly stated to the senior U.S. diplomat to the Vatican that the bombing was “a colossal blunder . . . a piece of a gross stupidity”.

Following its destruction, paratroopers of the German 1st Parachute Division then occupied the ruins of the abbey and turned it into a fortress and observation post, which became a serious problem for the attacking allied forces. 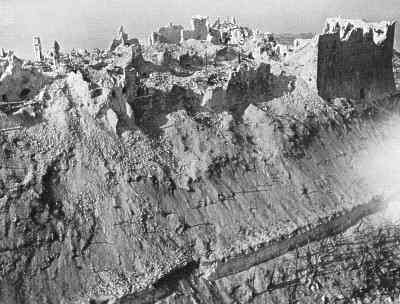 Following the bombing several assaults took place that involved the Royal Sussex regiment and other troops, including the legendary Ghurka troops from the Himalayas. They fought bravely and made headway into the mountainous terrain, but had to pull back after they were assaulted by an armored counter attack.

The Fall of the Gustav Line

After another failed battle in March, the allies took their time to build up for a fourth and decisive push. The allies were able to sneak additional troops to the line by moving during the night in small groups. Finally by May they had assembled thirteen divisions for the assault. The Germans were unaware of this buildup and thought they only faced six divisions to the four divisions defending.

Within an hour and a half the attack was in motion in all four sectors. By daylight the U.S. II Corps had made little progress, but their 5th Army colleagues, the French Corps, had achieved their objectives and were fanning out in the Aurunci Mountains toward the 8th Army to their right.  They were rolling up the German positions between the two armies.

By the afternoon of May 12th, the Rapido bridgeheads were increasing despite furious counterattacks.  All the while, the attrition on the coast and in the mountains continued, and by May 13th the pressure was starting to tell.

In the early morning of May 18th a Polish reconnaissance group found the monastery defenses abandoned and raised a Polish flag over its ruins. The last surviving German paratroops, approximately only 200 in number, had withdrawn the night before to take up new defensive positions on the Hitler Line. 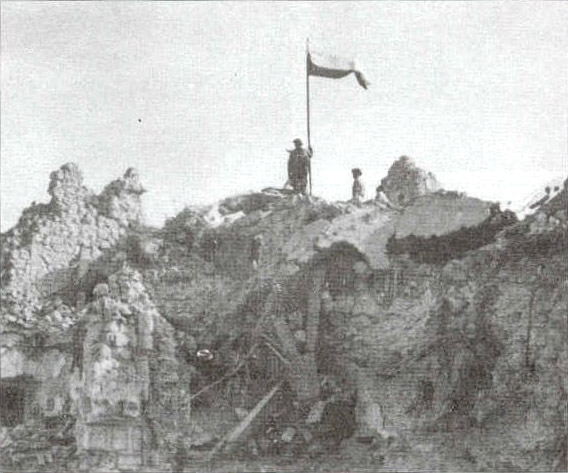 The capture of Monte Cassino came at a high price. The Allies suffered around 55,000 casualties in the Monte Cassino campaign. German casualty figures are estimated at around 20,000 killed and wounded.