For more than two centuries, the United States has observed the sacrifices of the men and women of the United States Armed Forces. Initially called “Decoration Day,” the holiday took place on May 30th each year. In 1882, it was renamed to “Memorial Day,” but was not declared official until 1967.

Originally, Decoration Day was a day to commemorate the Union soldiers who died in the Civil War. However, by the 20th century it had been extended to honor all Americans who have died in all wars.

On June 28, 1968 the United States Congress moved the Memorial Day holiday to the last Monday of the month of May. This year, that day happens to be today.

Traditionally, Memorial Day is observed by the United States flag being raised to the top of the staff; then solemnly lowered to the half-staff position where it remains until noon. At that point it is raised to full-staff position for the remainder of the day.

On this day, we observe heroes. Those who went above and beyond the call to ensure there would be a future for those they cared for. For the country they fought for.

“Heroism is not only in the man, but in the occasion.” – Calvin Coolidge, 30th U.S. President

“It doesn't take a hero to order men into battle. It takes a hero to be one of those men who goes into battle.” – Norman Schwarzkopf, U.S. Army General

“Bravery is the capacity to perform properly even when scared half to death.” – Omar Bradley, U.S. General of the Army

“Let every nation know, whether it wishes us well or ill, that we shall pay any price, bear any burden, meet any hardship, support any friend, oppose any foe to assure the survival and the success of liberty.” – John F. Kennedy, 35th U.S. President 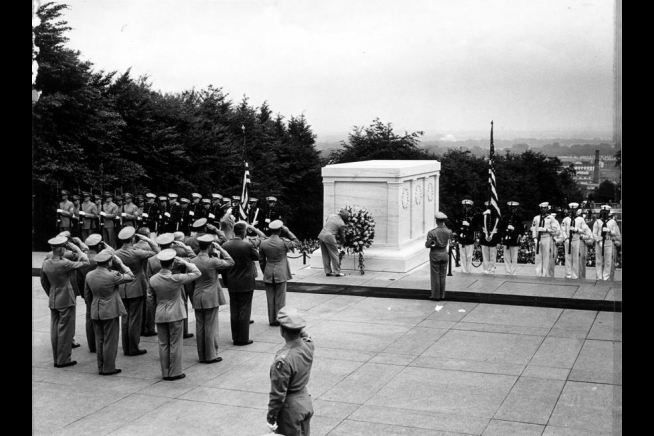 33rd U.S. President Harry Truman places a wreath at the Tomb of the Unknowns.

We at Wargaming America want to take this opportunity to thank the families and members of the United States Armed Forces—and its allies—for your sacrifices serving your country.

“The only easy day was yesterday” – U.S. Navy SEALs

“Always Ready, Always There” – National Guard of the United States

“Of their own accord” – United States Army Rangers