On November 10, we started a donation drive with the organization K9s For Warriors, the world's largest provider of Service Dogs for veterans. We challenged the World of Tanks community to answer the call and support K9s For Warriors through a tiered donation program. Charitable contributors received one of three "Vet's Best Friend" support packs based on level of participation.

We asked and you answered. Loud and clear.

In the end, we raised over $25K for K9s For Warriors—an amount that was far above our internal benchmarks. It left us speechles.

On behalf of World of Tanks and K9s For Warriors, we want to thank everyone who donated. Your generosity will provide much-needed help for our veterans!

November 11 is Veterans Day, where we recognize those who served in the U.S. Armed Forces.

Beginning November 10, 2021, players of World of Tanks can support the amazing work K9s For Warriors does by acquiring a "Vet's Best Friend" pack, via charitable contributions directly to K9s for Warriors. All proceeds go to benefit this organization.

The World of Tanks community can answer the call and support K9s For Warriors through a tiered donation program. Charitable contributors will receive one of three "Vet's Best Friend" support packs based on level of participation.

All funds go directly to K9s For Warriors via their donation page and will significantly help them continue their mission.

"K9s For Warriors tirelessly works to bring a better life to an extremely vulnerable group of America’s returning warriors,” says Maxime Mashkov, U.S. Publishing Director for World of Tanks. "The World of Tanks community have always been supporters of America's active and retired military. By working with K9s For Warriors now, we impact the lives of U.S. service members and preserve the life of a future service animal who will aid them, but these efforts can only be sustained through the contributions of all shapes and sizes."

"Vet's Best Friend" support packs include Decals, dog-themed Camouflage, and even a Premium tank. Take a closer look at the customization items:

All donations are tax deductible. 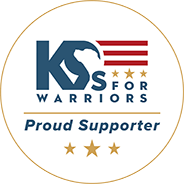 About K9s For Warriors

Founded in 2011, K9s For Warriors has rescued more than 1,300 dogs across the country and paired nearly 700 veterans with trained Service Dogs to mitigate symptoms of post-traumatic stress, traumatic brain injuries and military sexual trauma. The nonprofit’s Station Dog program provides homes for trained dogs that will no longer be paired with veterans by placing them with police and fire departments. JSO’s adoption of Buster, a yellow Labrador retriever, marks the eighth Station Dog donated by K9s For Warriors and the seventh in Florida.

Determined to end veteran suicide, K9s For Warriors is the nation’s largest provider of trained Service Dogs to military veterans suffering from PTSD, traumatic brain injury and/or military sexual trauma. With most dogs coming from high-kill rescue shelters, this innovative program allows the K9/Warrior team to build an unwavering bond that facilitates their collective healing and recovery. This treatment method is backed by scientific research (from Purdue University's OHAIRE Lab) demonstrating Service Dogs' ability to help mitigate their veteran’s symptoms of PTSD while simultaneously restoring their confidence and independence. Founded in 2011 as a 501 (c)(3) nonprofit organization, K9s For Warriors remains committed to bringing widespread awareness to veterans' mental health and contributing to policy-level reform.