Tankers! The IGN Prime World of Tanks Tournament signups end in less than a week. Be sure to take advantage of this great promotion and unlock content exclusive to IGN Prime members that will no doubt assist you on the battlefields of World of Tanks.

Not only do you have the opportunity to participate in the tournament, with a prize pool of close to $10,000, but you'll also have access to unique content created by IGN for their Prime members. Included in this unique content are map tactics videos narrated by General Naomi Kyle. Check out a free preview below!

Other great offers in this promotion from IGN, including World of Tanks in-game content include:

As part of this great promotion, we're also hosting a World of Tanks tournament in conjunction with IGN. Whether a new player or a veteran, you have the opportunity to participate in this 5-vs.-5 single elimination tournament for great prizes, including $3,000 worth of prizes going to the winning team. 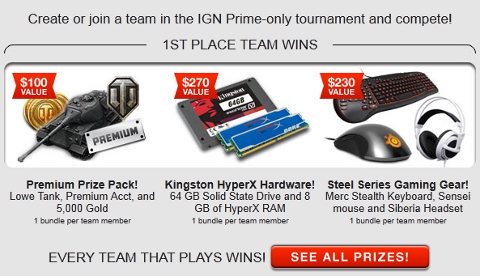 If these great prizes pique your interest, be sure to gather your team and sign up for the tournament!