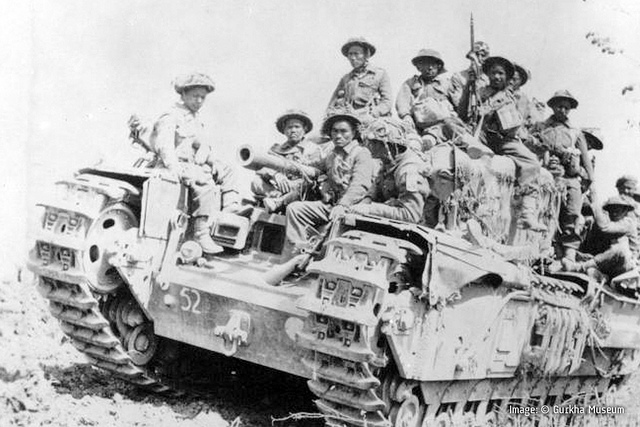 Gurkhas are people from Nepal. Their name is derived from the Hindu warrior-saint Guru Gorakhnath.

During the war in Nepal during the year of 1814, the British failed to annex Nepal as part of the Empire, but Army officers were impressed by the tenacity of the Gurkha soldiers, and encouraged them to volunteer for the East India Company.

During the Indian Rebellion of 1857, Gurkhas fought on the British side, and became part of the British Indian Army.

The tradition of this recruitment continued into the British Army in World War I and World War II.

At the start of World War II there were 20 Ghurka Battalions; by the end of the war this number had grown to 45. During the War over a quarter of a million men from Nepal served in the British army. 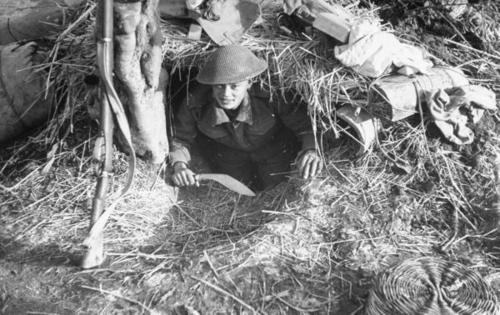 The tenacity and ferociousness of the Ghurka solider is legendary, and they were one of the most feared foreign troops fighting for the British. Ghurka soldiers were raised for war from a very young age, not unlike the Spartan soldiers of Greece. Their short stature was an advantage in many of their stealthy tactics. The Climate of Nepal, home of the Himilayan mountains, provides very thin air. To compensate for the lower oxygen levels, the people of this region have thicker blood that allows their blood vessels to carry more oxygen to the body. In a Military setting this means that the Ghurka soldiers often demonstrated super human levels of endurance.

Many of the Axis troops feared the Ghurkas. Stories began to circulate amongst the Axis troops of shadowy figures that would come at night. It was rumored that Ghurka soldiers would enter an enemy camp and slit the throats of many sleeping soldiers leaving just a few with their boot laces cut, so that they would wake up and know they could have been killed just as easily. This tactic made sure that these surviving soldiers would spread the word and sow fear among their brethren.

The iconic weapon of the Ghurka was the Kukri. The Kukri is a curved Nepalese knife, similar to the machete; the cutting edge is inwardly curved in shape and is the icon of Nepal. It was the basic and traditional utility knife of the Nepalese people. The Kukri made a very effective and fearsome weapon. 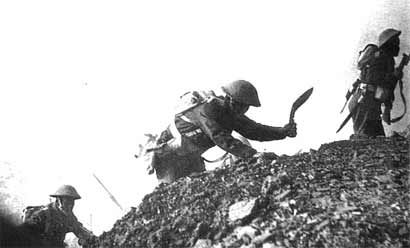 During the Battle of Monte Casino, Ghurka troops were ordered to assault the hill directly against a prepared position held by the elite German Paratroops. They bravely charged up the hill, over ground that was steep, heavily mined and under heavy fire. A small group of Ghurkas finally reached the walls of the Abbey, but were then pushed back down the hill. Over two-thirds of the Ghurkas committed were lost in this attack.

The Ghurkas continued to serve the British military throughout the war, and served both in Europe and in the Pacific. They gained the respect and admiration of their allies, and the fear and loathing of their enemies. They still serve faithfully today.