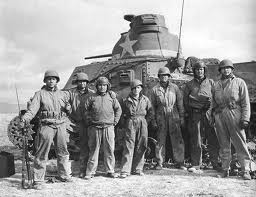 In November 1943, Allied troops landed in Algeria and Morocco as part of Operation Torch. These landings, coupled with Lieutenant General Bernard Montgomery's victory at the Second Battle of El Alamein, placed German and Italian troops located in Tunisia and Libya in a precarious position. In an effort to prevent forces under Field Marshal Erwin Rommel from being cut off, reinforcements were quickly shifted from Sicily to Tunisia. Advancing west, Montgomery captured Tripoli on January 23, 1943, while Rommel retired behind the defenses of the Mareth Line.

The Battle of the Kasserine Pass was a battle that took place during the Tunisia Campaign of World War II in February 1943.

It was a series of battles fought around Kasserine Pass, a wide gap in the Grand Dorsal chain of the Atlas Mountains in west central Tunisia.

It was significant because it was the first large-scale meeting of American and German forces during World War II. 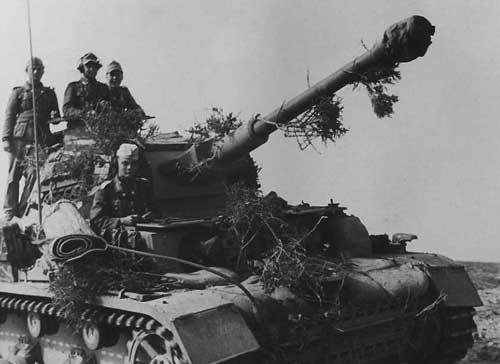 To the east, American and British troops advanced through the Atlas Mountains after dealing with the Vichy French.

It was the hope of the German commanders that the Allies could be held in the mountains and would be prevented from reaching the coast and severing Rommel's supply lines. This plan was disrupted by the Allied capture of Faïd, east of the mountains.

The German 21st struck the town. This drove the Free French back, and the Germans mounted a blitzkrieg attack on elements of the US 1st Armored division.

Two weeks later, Rommel elected to make a thrust through the mountains with the goal of decreasing pressure on his flanks as well as capturing the Allied supply depots in the western arm of the mountains.

As Rommel personally led the 10th Panzer Division into the Kasserine Pass, he ordered the 21st Panzer Division to press through the Sbiba gap to the east. This attack was effectively blocked by British troops. In the fighting around Kasserine, the superiority of German armor was apparent when the Panzer IVs and Tigers quickly bested the US M3 Lee and M3 Stuart tanks.

By the morning of February 21, the Allied lines at Thala were reinforced by experienced British infantry back by massed US artillery. Attacking, Rommel was unable to break through. Having achieved his goal of relieving pressure on his flank and concerned that he was over-extended, Rommel elected to end the battle. 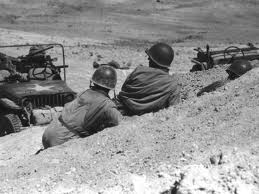 While complete disaster had been averted, the Battle of Kasserine Pass was a humiliating defeat for US forces. Their first major clash with the Germans, the battle showed an enemy superiority in experience and equipment. It also exposed several flaws in the American command structure and doctrine. After the fight, Rommel dismissed American troops as ineffective and felt they did not pose a threat to his command.

This assumption would come back to bite Rommel in France years later, when the, now veteran, American troops would face off against a depleted German force.