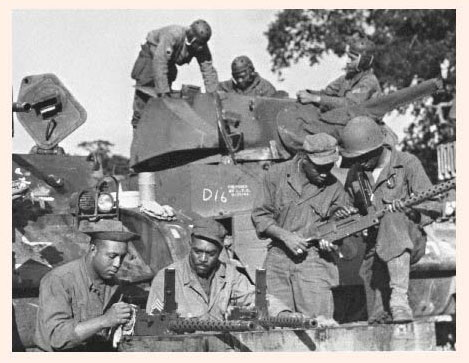 Prior to WWII, assumptions about the inferiority of black soldiers as combat troops dominated military thinking and policy. It was common practice to segregate blacks into support service units to provide cooks, truck drivers, orderlies, and other noncombat personnel.

Later referred to as the Black Panther Tank Battalion, the 761st was attached to the XII Corps' 26th Infantry Division, assigned to Gen. George S. Patton Jr.'s Third Army; an army already racing eastward across France, and committed to combat on Nov. 7, 1944.

Patton made a famous speech that is sometimes misquoted and was inaccurately portrayed in the movie Patton. It was to the black tankers of the 761st that Patton delivered his famous speech.

“Men, you are the first Negro tankers to ever fight in the American army,” he began. “I have nothing but the best in my army. I don’t care what color you are, so long as you go up there and kill the Kraut sonsofb----s. Everyone has their eyes on you, and is expecting great things of you. Most of all, your race is looking forward to your success. Don’t let them down, and, G--damn you don’t let me down. They say it is patriotic to die for your country. Well, let’s see how many patriots we can make out of those German sonsofb----s.” 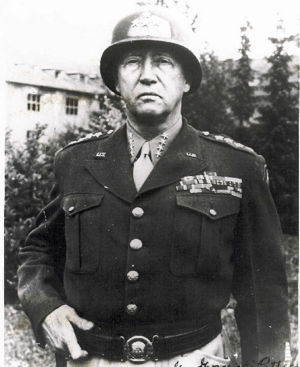 During the 183 days Patton’s Panthers, the 761st Tank Battalion, were in continuous combat, they participated in four major Allied campaigns, including the Battle of The Bulge.  They inflicted more than 130,000 casualties upon the enemy. Eight black enlisted men received battlefield commissions, while 391 received decorations for heroism: 7 Silver Stars for Valor (three posthumously); 56 Bronze Stars for Valor; and 246 Purple Hearts. Three officers and 31 enlisted men were killed in action, and 22 officers and 180 enlisted men were wounded.

It is of note that Jackie Robinson, the famous black baseball player that is credited to breaking the color barrier in baseball, was a proud member of the 761st. 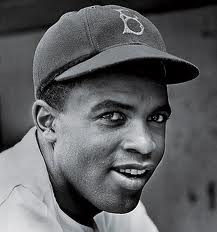 As a result of their great fighting ability, they spearheaded a number of Patton's moves into enemy territory.  They forced a hole in the Siegfried Line, allowing Patton's 4th Armored Division to pour into Germany.  They fought in France, Belgium, and Germany, and were among the first American forces to link up with the Soviet Army (Ukranians) at the River Steyr in Austria.

The 761st lived up to their motto: “Come out Fighting”.