Rarely does a military unit so completely embrace its motto. The 442nd “Go for Broke” Infantry Regiment was the embodiment of the term, Hero.

This unit became the most highly decorated regiment in the history of the United States Armed Forces, including an astounding 21 Medal of Honor recipients.

“All three companies went into action boldly facing murderous fire from all types of weapons and tanks and at times fighting without artillery support….The stubborn desire of the men to close with a numerically superior enemy and the rapidity with which they fought enabled the 100th Infantry Battalion to destroy completely the right flank positions of a German Army….The fortitude and intrepidity displayed by the officers and men of the 100th Infantry Battalion reflects the finest traditions of the Army of the United States”

Later in July the 442nd and its 1st Battalion, the 100th, was under constant attack from the German forces which led to 1,100 enemies killed and 331enemies captured. After repulsing these attacks, the 442nd assaulted Hill 140 dubbed “Little Cassino”, which was the main line of defense in the area, taking massive casualties in the effort. They continued to clear town after town in Italy until July 25th, 1944.

During these 3 weeks the unit received casualties numbering 972 wounded, and 239 killed. They were pulled from the line to rest and refit.

After leaving Italy they landed in France and fought in several engagements; including desperate fighting around Bruyeres and taking the high ground around Biffontaine. 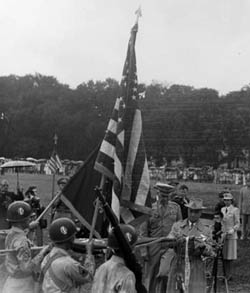 The 141st Battalion, soon to be known as the “Alamo” Regiment, attacked the German lines and had become trapped 2 kilometers behind enemy lines.

Four days after the 141st was cut off, the 442nd was asked, on only 2 days rest, to attempt the rescue the stranded American troops.

Snow and thick fog hampered the rescue and the 442nd quickly found themselves surrounded and fighting in all directions. The fog was so thick in some areas that soldiers had to hold on to one another, so as not to lose their allies as they advanced.

The German grenadier resistance grew very strong around a hill that blocked the way of the 442nd. Soon the advance stalled.  It was impossible to advance to another tree, rock, or gully without receiving a storm of artillery and gunfire.

The pinned troops clung to life, unable to move, and unable to return fire in any appreciable way against a determined and entrenched foe.  The situation grew desperate.

Soon they all rose and made a frantic charge uphill through the forest, screaming at the top of their lungs, desperate to destroy their enemy.

When the smoke cleared only the 442nd remained. The 141st was rescued soon after.

The cost had been high. Of the 2,943 men and officers that started this campaign, only 800 remained unharmed.

The 442nd continued to fight for the remainder of the war.  They gained further distinction while fighting on the Gothic Line in Germany and closing out the war.

The 4,000 men who initially came in April 1943 had to be replaced nearly 3.5 times. In total, about 14,000 men served, ultimately earning 9,486 Purple Hearts and an unprecedented eight Presidential Unit Citations. Twenty-one of its members were awarded Medals of Honor. Members of the 442nd received 18,143 awards total.

This display of honor and courage is truly remarkable and stands on its own in the annals of military history.

Any one should have been very proud to have served with these men.

Any country should have been proud to have these men in their service.

These men were different however, they were Japanese -Americans.

The reward for their service was disdain from many Americans, and the internment of their families.

Still, they went for broke. 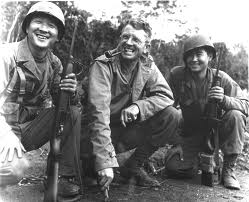 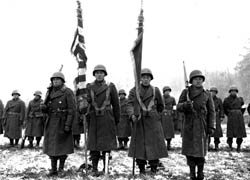