Historical Battles: The Battle of Kursk 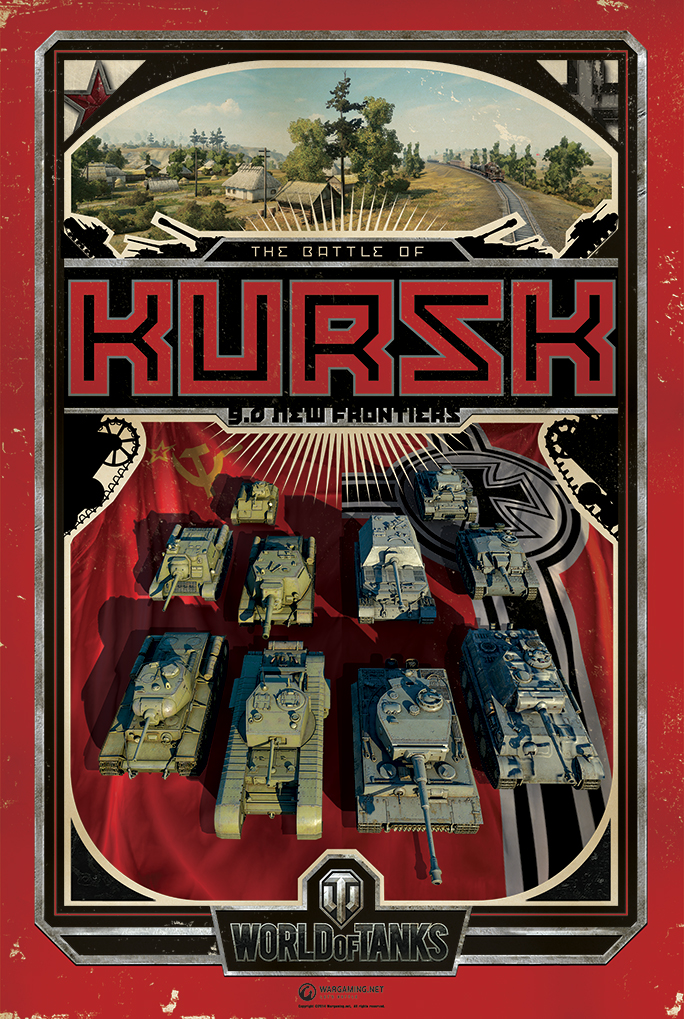 The Battle of Kursk was one of the most decisive battles of the Eastern Front, and of World War II in general. The battle had two main phases: the German attack, called Operation Citadel, and later the Soviet counteroffensive.

In the first phase, the enemy, collecting their best forces—including 13–15 tank divisions and with the support of a large number of aircraft—will strike Kursk with their Kromskom-Orel grouping from the north-east and their Belgorod-Kharkov grouping from the south-east… I consider it inadvisable for our forces to go over to an offensive in the near future in order to forestall the enemy. It would be better to make the enemy exhaust himself against our defences, and knock out his tanks and then, bringing up fresh reserves, to go over to the general offensive which would finally finish off his main force.
~Soviet Deputy Supreme Commander Georgiy Zhukov1

The Battle of Kursk was a grueling month-long series of engagements lasting from July to August of 1943. After the decisive defeat of a large German force at the Battle of Stalingrad, the strategic momentum on the Eastern Front had shifted in favor of Soviet forces. In January, they began to push back.

The Germans were still holding firm with strong positions in the Ukraine, Central Russia, and the Baltic States, though they were suffering from an overstretched supply system and had been denied the ability to retreat or move flexibly by German High Command. The Soviets took full advantage by launching smaller, indirect attacks across a wide front and pressuring valuable strategic locations, eventually pushing the German army back as far as the Don River, taking the town of Kursk, on February 8, 1943.

This meant that the Wehrmacht was nearly encircled to the south part of the front and close to collapse.

German Field Marshal Erich von Manstein realized swift action needed to be taken. He dissolved Army Group B, and split its forces between Army Groups South and Center, planning for a counterstrike designed to throw back the Soviet forces, who were now encountering their own supply difficulties. Von Manstein was given freedom of movement, and managed to contain and push back the Soviet advance at the Third Battle of Kharkov, with a salient of Soviet-controlled territory extending into the German lines around Kursk itself.

By the time of the Spring “rasputitsa” or wet season, both sides were exhausted and had stopped to recover and wait until the dry season, each plotting new strategies. The stage was set for a clash of titans, as a combination of three operations, the German “Operation Citadel” and the Soviet "Polkovodets Rumyantsev” and “Kutuzov” were planned simultaneously, with Citadel calling for a pincer attack with tank forces to the north and south, hopefully tearing a hole through Soviet lines and stopping their advance cold.

With a severe shortage of infantry and artillery, the German army would be forced to rely primarily on its panzer arm, and, despite the fact that the offensive had to be launched swiftly to have any hope of success, it was delayed until additional Panther and Tiger tanks could be brought up and reinforce the push. Even with these new weapons, the German command was not sure if the attack would be successful.

The capture of a German Combat engineer by a Soviet patrol on the night of July 4 revealed that the Germans were going to attack in the early morning of July 5.

On paper, the German forces were terrifying: battle tested Tiger tanks, followed by new Panthers and Ferdinand Assault guns; however, while the tank and air forces of the two armies were even, the Soviets had learned the lessons of their early losses and managed to integrate infantry and artillery support into an effective combined-arms doctrine. A little over an hour before the German attack was scheduled to begin, Soviet General Rokossvsky ordered a full bombardment of the German lines and preparatory areas, catching the enemy off guard, and spoiling the surprise of the attack. Struggling to respond, the Panzers rolled out against the Soviet lines, and many of the untried Panthers caught fire without being hit. Despite this, the Germans had managed to achieve a three mile breakthrough in the face of a strong Soviet defense.2

It was here, however, that the advance ground to a halt as minefields, aircraft, and determined infantry proceeded to engage their German opposite numbers. The front became static, and both sides dug in, waiting for the advantage until German General Hoth planned a breakthrough of the Soviet lines, avoiding most of the Soviet defenses and flanking to Prokhorovka, a key location where the Soviet reserves could disembark by rail. Avoiding a pre-emptive attack by Soviet aircraft through the successful use of radar emplacements, the Luftwaffe was able to launch and engage the Soviet air forces successfully, with German ground attack aircraft taking a large toll on a column of T-34 tanks. The ground attack was in full swing as the hard-pressed Soviet tried to hold out.

Suddenly, word came from the rear that the Fifth Guards army, which had traveled at night to avoid detection, had arrived! On the 12th of July, 1943, around 700 German tanks, Panzer III’s, IV’s, Tigers and tank destroyers met around 800 Soviet tanks, primarily T-34s, some T-70s and around thirty Churchill tanks which had charged forward to engage, carrying paratroopers of the 9th Guards Airborne Division on their backs.

Tanks and aircraft clashed over the smoke-choked battlefield for eight hours until finally the Soviets managed to gain possession of the torn and burned battlefield at the cost of around three hundred tanks and severe losses to the Fifth Guards Tank Army. On the other side the Germans lost around three hundred vehicles as well, with thousands killed and wounded.3 Despite new weapons such as the Panther and Tiger tanks, the German offense had been stymied and they were forced to send much of the surviving armor to Italy, as the Allied forces had just landed in Sicily. After one of the largest clashes of armored vehicles, the Red Army now possessed the strategic initiative for the duration of the war in Europe.