Founding of the American Tank Corps 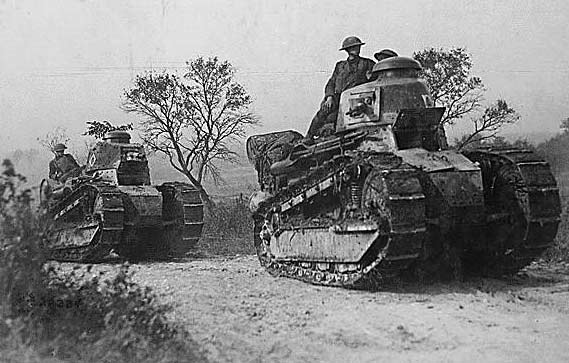 Founding of the American Tank Corps

The American Tank Corps of the American Expeditionary Forces was formed on January 26th, 1918.

The tank was introduced during WWI, and while the initial shock of their appearance gained attention, their unreliability and misuse quickly made the concept of tanks unappealing to most in high command.

Early tanks suffered from many flaws; they were slow, poorly ventilated, and were vulnerable to artillery fire. They were often used in support of infantry assaults.  Typically, after long pre-bombardments of enemy forces which removed any surprise during their deployment.

Life in a tank was not only dangerous but often suicidal. They were slow—prefect targets for the artillery, and they had vulnerable fuel tanks that could burn the crew trapped inside.

One fateful day changed the way the tank was viewed. On November 20th 1917, 381 tanks were concentrated behind the British line at Cambrai. Not only were the tanks massed for the first time, but the attack, which started at 6:20am, did not have a preliminary bombardment. The attack caught the Germans off guard. The assault rolled the Germans back five miles, a staggering amount of territory in a war that often was measured in yards gained.

Unfortunately, the British Headquarters had so little faith in the attack that they did not have enough troops on hand to support the breakthrough. Despite the British forces not fully capitalizing on the advantage, the glimmer of the tank’s unrealized potential was seen by forward thinking military leaders. 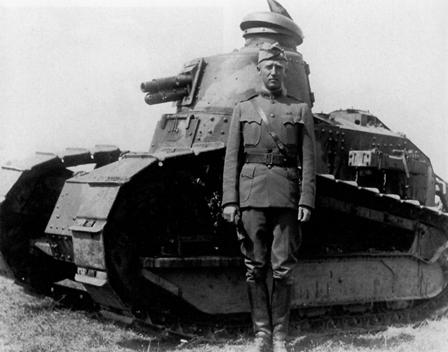 US General Pershing was one of those leaders, and summoned Colonel S. D. Rockenbach to serve as Chief. Major George S. Patton was chosen to organize and direct the Tank Center at Langres, France.

After training and getting acquainted with their French Renault FT-17 tanks, The American tank crews saw their first battle on September 12th, 1918. The action near St. Michiel included two battlions, the 344th and 345th. These battalions formed the 304th tank brigade, and were led by none other than George S. Patton.

The Attack started at 5am. The tanks of the 344th clanked ahead clearing barbed wire and machine gun nests. The 345th followed in the rear.  All went according to plan until they reached the first German trench where many tanks became mired.  Time was lost getting the tanks out of the mud and resupplying all of the fuel that had been consumed.

In the days that followed, the 304th brigade was stopped by mud, breakdowns, road congestion, and a lack of fuel. 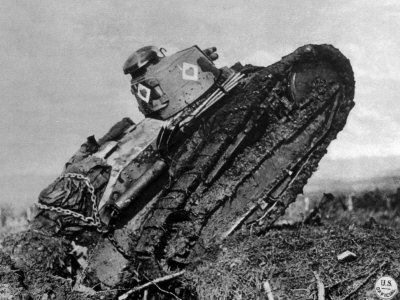 This may have been an inauspicious start to the American tanking experience, but it provided many lessons to all of those involved.  It gave George S. Patton, some day to become one of the greatest American generals, his first taste of armored combat.