There’s much to learn when playing World of Tanks and even experienced players may not know all there is to know about Crew. We're starting with a new series of posts that cover the basics of Crew and explain advanced techniques that can help you...

You Gotta Have Crew

Every vehicle in World of Tanks requires a Crew, but the number of Crewmembers for each vehicle varies. Load the Garage and pick a vehicle to see its assigned Crew in the upper left-hand corner of the screen.

There Are Many Crews Like It, But This is Mine

Each Crewmember has unique characteristics. Some can be improved or changed, some can’t, but understanding what those characteristics mean will help you build the best Crew possible. 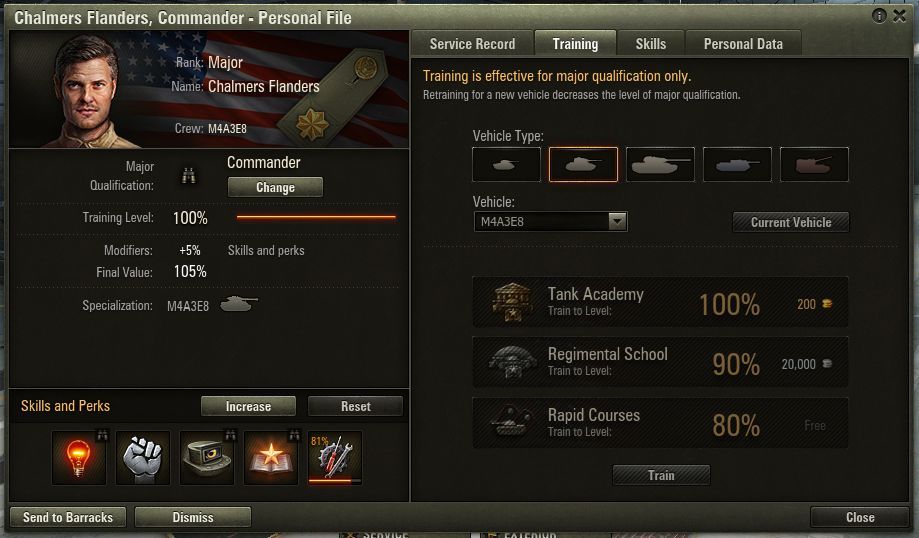 Each Crewmember belongs to a single nation and can only be used in that nation’s vehicles.* You can’t change a Crewmember’s nationality.

Each Crewmember has a different position in the tank. They're assigned one of the following Qualifications: Commander, Gunner, Driver, Radio Operator or Loader. All vehicles require a Crewmember for each position, but sometimes Crewmembers can fulfill multiple positions. For example, in the IS-3A, the Commander is also the Radio Operator and Loader.

Your Crew specializes in a type of tank -- like a light tank, heavy tank or tank destroyer -- and a specific vehicle, like the M4A3E8 Sherman or Pz.Kpfw. IV Ausf. H. When a Crewmember is assigned to a vehicle that matches both the class and specific vehicle specialization, they’ll perform their best without penalty. But you can also retrain your Crew to change their specializations, but we'll cover that in Crew 102: Moving Crew, coming up next.

A Crewmember’s ability in a vehicle is measured by the percentage next to their name. That value grows as the Crew takes part in battles, and once it becomes 100% you can choose a Skill or a Perk to teach them. Read about how to effectively teach your Crew Skills and Perks in our Crew 103: Skills and Perks, coming later this month. Or peruse the full list of Skills and Perks and how they can benefit you in battle.

Note: Commanders and equipment bonuses can add up to 10% to other Crewmembers, which can be confusing when you’re trying to find out the unmodified training value of your Crew.

With this basic foundation, remember your Crew and look out for the next lesson.

Yes, you'll find exceptions like German Crew in a Czech T-25 tank, but this is about the basics, and we’re sticking to them!