Players' Guide to the AC 1 Sentinel

The AC 1 Sentinel is the first Australian (ANZAC / Commonwealth) vehicle in World of Tanks, and quite a quirky one!

The AC 1 is equipped with a 2pdr gun with a 2.2-second reload time and a rate of fire bested only by the Matilda and Valentine tanks.

The Sentinel's standard configuration is more than adequate for most tier IV matches -- a shell with 88mm penetration means it can penetrate most tier IV, V and tier VI heavy tanks. 1,220 damage per minute can give the Grant, Lee and Matilda medium tanks a run for their money. But with its dispersion, tanks like the Matilda will win a head-to-head. AC 1 does have more ammo than the Matilda, though, so if you can avoid the face-offs, it's possible to outlast opponents in long firefights.

To compete with tiers V-VI, the AC 1 can be fully loaded with Premium ammunition, a Gun Rammer and Vents to give it 121mm of penetration and 1,421 damage per minute.

Check out a Fully Loaded Sentinel on tanks.gg!

The Sentinel is especially effective when located on a hill above an opponent and placed in a semi-hull-down position to utilize its front and turret armor. 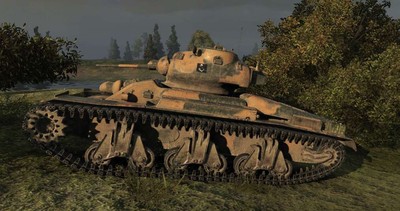 The Sentinel struggles in higher-tier matches, but can still play its part!

Large Repair and First Aid Kits actually reduce the chance of damage or Crew injury. While you can use Pudding and Tea instead of the Fire Extinguisher to improve your overall performance in battle, this presents a large fire risk. Keep in mind that consumables need to be replenished after each battle if used, while food or gas items are used automatically.

Due to the Sentinel's dispersion factor, an Enhanced Gun Laying Drive is very strongly recommended, while a Gun Rammer speeds the reload. Improved Ventilation in the final slot completes the suggested loadout. Alternatively, Coated Optics or a Binocular Telescope can maximize the tank's already good view range.

Overall, the Sentinel plays a like a lighter and quicker version of the Matilda. If you're looking for a tier IV medium tank with a little more "get up and go," this may be the tank for you!