The little butt-kicking Type 95 was the most prolific Japanese armored fighting vehicle of the Second World War.

The causes for such widespread usage of this simple vehicle were just that: its small size and lack of complexity made it suitable for mass production in small assembly lines.

In July 1933, the infantry and cavalry school completed a design study for a new light tank based on features of the two existing designs. 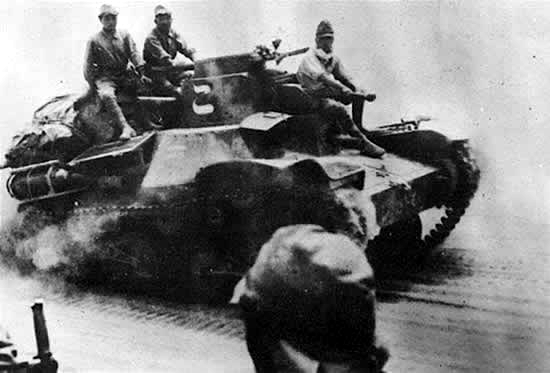 It had a driver and a machine gunner/mechanic in the hull, and a commander/gunner/loader in the small turret.

It was powered by the same diesel engine as the Type 89B (120 hp [89.5 kW] Mitsubishi A6120VDe air-cooled diesel engine) but weighed only half as much, offering better road speed.

Construction was handed over to Mitsubishi and a prototype began trials in June 1934. After extensive tests by both the infantry and cavalry, the light tank was modified and shipped to the new Independent Mixed Brigade in Northern Manchuria. The cold weather trials went extermely well and a second prototype was built by Mitsubishi in June 1935, based on the lessons learned from the tests.

The design was so satisfactory that it was accepted for production as the Type 95 Ha-Go light tank.

In later years the use of cavalry faded, but the designation itself was retain to reflect the initial purpose of the vehicle. 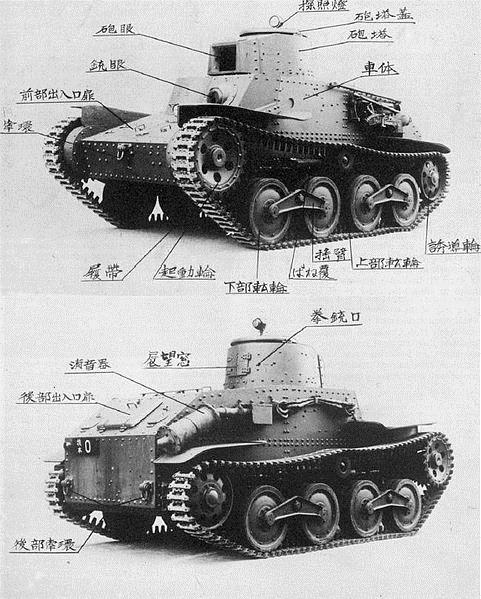 The prototypes were initially armed with only a 37mm gun in a one-man turret. However, before large-scale production commenced, they were modified to include a separate ball-mounted machine gun. This was fitted as an extension on the right rear side of the turret, patterned after the Type 89B turret.

This modification allowed the tank commander to use either the 37mm gun or the machine gun, depending on the mission, by switching to the appropriate weapon.

The most characteristic feature of the Type 95 was its simple suspension system. Two bogie wheels were suspended on a single bell crank, with two bell cranks per side. The tracks were driven through the front sprockets. There were two return wheels.

The suspension had problems early on, with a tendency to pitch so badly on rough ground that the crew sometimes found it impossible to drive at any speed. As a result, it was modified with a brace to connect the pairs of bogies (Manchurian suspension). Despite this, the tank continued to give its users a rough ride across uneven ground.

The tank was provided with an interior layer of asbestos, primarily to isolate the crew from the sun-heated armor plates but also to protect them from injury when the tank moved at high speed across rough terrain. 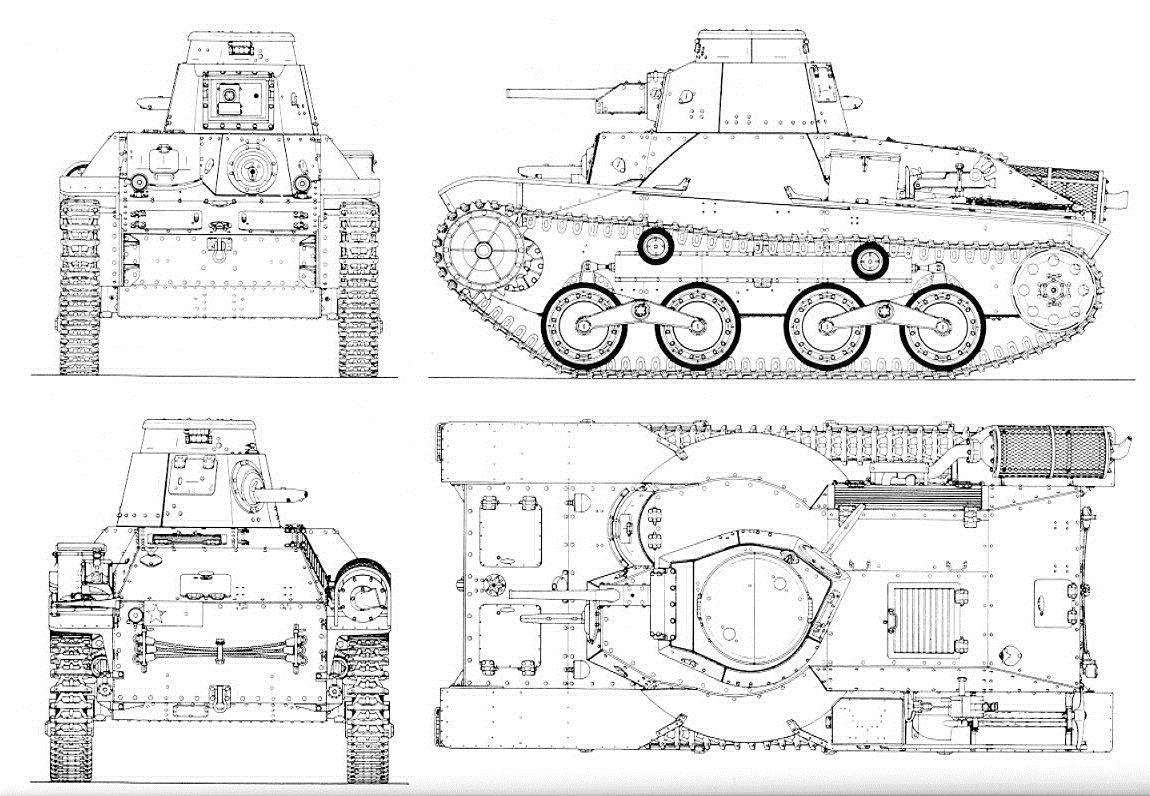 Other changes were also incorporated into the production vehicle, such as extended hull sides to provide more storage space for ammunition. Some tanks were fitted with two reflectors in the front of the vehicle for night operations.

Altogether some 2,300 vehicles were ultimately delivered. Mitsubishi Heavy Industries was an early primary maker of the tank systems, although Sagami Arsenal,  Hitachi industries, Niigata Tekkosho, Kobe Seikosho and Kokura Arsenal combined to deliver over 1,200 additional vehicles by the war’s end.

It should be noted that tank production was severely hindered by the prioritizing of resources to the Imperial Japanese Navy over that of the Japanese Army. 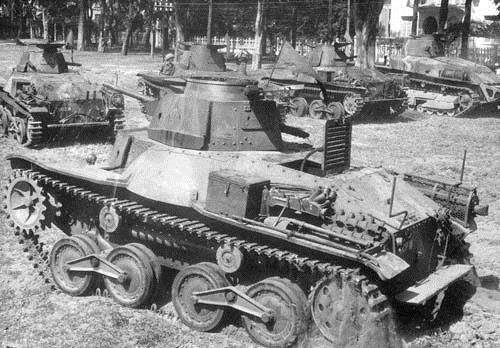 The Type 95 was made operational with the IJA in 1935. At its inception, the tank system was one of the better designs in its class of light tanks from anywhere in the world. It carried a potent gun for its time and as a whole the Ha-Go compared favorably to foreign designs.

Of its variants, the most “interesting” one was the Type 2 “Ka-Mi” amphibious tank. This model was based on the Type 95 chassis but was modified for amphibious operations and used for “island hopping”.

In 1943, a chassis was used for trials of an amphibious model intended for the Navy SNLF. This resulted in the Ka-Mi conversion, equipped with two floatable and detachable pontoons. Produced from 1943 to 1944, they fought in the Mariana Islands, the Marshall Islands and Guam in 1944. Only 182 were ever completed. 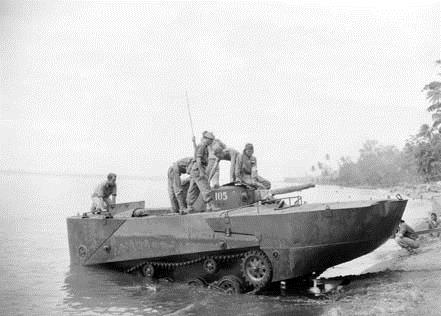 A quick look at armaments

The primary armament was the 37mm Type 98 gun. While capable of penetrating lightly armored vehicles and some fortifications, the weapon lacked effectiveness against most Allied medium tank designs by the middle years of the war.

The tank carried two types of 37mm ammunition, high-explosive and armor-piercing. For the latter, the muzzle velocity was 675–700 m/s and the armor penetration was 25mm at a distance of 500m.

The Type 95 Ha-Go was in every Japanese land-based operation: against the British in Malaya and Singapore, and it was also battle-tested in British India.

During the early years, Allied forces stationed in Asia were not expecting, nor were they prepared to fight, armored vehicles in jungle areas and their defenses eventually gave way for Japanese victories throughout Asia and the Pacific.

The only enemy tanks ever to land on US soil were Type 95 Ha-Go light tanks, from a company of the 11th Tank Regiment. The regiment reinforced the 3rd SNLF that landed on Kiska in the Aleutian Islands off Alaska during the amphibious assault there on June 6-7, 1942. The islands were abandoned prior to the US counterattack in August 1942.

By the middle-to-late years of World War II, the Type 95 had finally met its match against more advanced and heavier American and British tanks arriving in the Pacific Theater.

The armor of the tank was too thin and its 37mm gun was severely outmatched against the heavily armed and armored British Steel Wall Queen – Matilda and the American M5 Stuart light and M4 Sherman medium tanks.

Additionally, use of the handheld “Bazooka” rocket launcher by the US marines was quite a shock, and an effective solution against the lightly armored Type 95.

In 1944, they were clearly outgunned and under-protected against bazookas, antitank rifles and even 50 calibre rounds, and so its era had officially ended.