Since we invited you to test Update 9.17, we gathered plenty of feedback on a variety of potential adjustments. We analyzed your suggestions and improved a few elements, resulting in a set of tweaks that you can check out by joining the second Public Test:

The Löwe gained another boost: a more powerful engine and thicker armor. And based on your feedback, we improved the combat parameters of the American T34 and T26E4 SuperPershing, the M46 Patton KR, and the Chinese 112, as well as for two French heavy tanks: the АМХ 50В and АМХ 50 120. Click the image below for details: 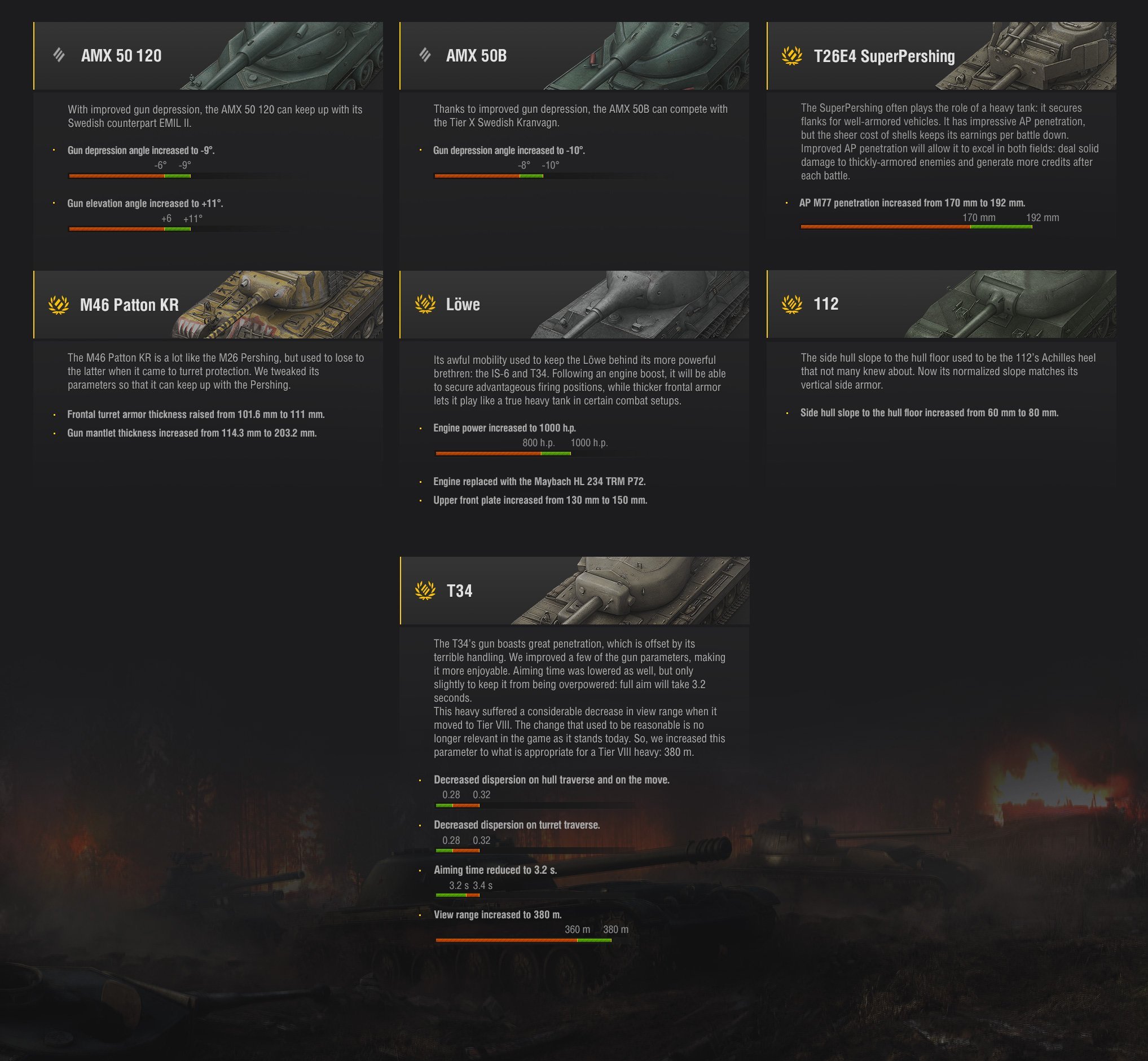 Based on your input from the first Public Test, we decided to postpone the overmatch and ricochet mechanics revision, initially planned for 9.17. This postponement (explained below) called for a number of adjustments to the tier IX-X Swedish tank destroyers.

Under the current ricochet and overmatch rules, they are extremely vulnerable to shells that are three or more times the nominal thickness of their armor. To fix that, we tweaked their combat parameters boosting their overall durability and reducing the cost of errors in-battle. These changes are designed to make them more fit for short and mid-range combat; while keeping them from getting overpowered.

We wanted the mechanics revisions to ensure enjoyable gameplay for the tier VIII-X Swedish tank destroyers. All the data, and your great feedback, showed that the reworked rules significantly influenced gameplay for everyone, and led to things like more ricochets where there used to be zero.

We know neither you nor us want that, so we're taking some extra time to fine-tune the mechanics. Until it's all ready and meets our high standards of quality, we’ll stick to the old, time-proven mechanic for all vehicles, including the Swedish TDs.

As part of the 9.17 Test, we created new elements for Swedish tank destroyer aim reticles. The work on them caused a bug that affected aim reticle sizes of all vehicles. You might have noticed it during the 1st Public Test. We fixed it in the 2nd Public Test. The aim reticles are now back to what they used to be in 9.16.

Any new or changed content for the Public Test should be considered not final and subject to change upon final update release.

For the full list of changes, please see the Notes section below.

Get the full story on how Public Tests operate in our handy guide.

The following vehicles have adjusted stats:

See the In Development section for screenshots!