All Clans can participate in the event - even if they are created after the event has begun.

1.2 The settings unique to the Armageddon Event Map are as follows:

1.3 The opportunity to participate in landing tournaments with captured provinces on Global Map. On first day of the event on June 10 at 16:00 (UTC), on a special map Redivision mode will be enabled.

1.5 Game Gold from two maps will be merged into one fund and distributed among provinces as follows:

The Armageddon event will take place based on each Clan receiving quests, which may be personalized for each Clan. Examples include:

2.1.1 When the map is open, the Clan will be offered to select a reference prime-time, where it will operate. Only the Commander or a Deputy Commander may choose a prime-time and may only do so at the beginning of the first quest. Clans are not required to complete any quests to remain on the Event Map.

2.1.3 Once the reference prime-time is confirmed by a responsible Clan officer, the Clan is considered to have started the quest.

The same province can be a starting quest province for several Clans.

2.1.4 If during World Redivision a Clan applied for Landing Tournament which they are not accepted into (by the tournament being completely full), a new quest will be automatically reassigned with a new landing province to this Clan within their selected primetime. During the Event Rules, if a Clan has applied for landing tournament but did not get into the queue, its chips will be transferred to the landing tournament for that province on the following day.

2.1.5 If during one turn a Landing Province has more applications than the remaining entries available to participate in the next landing tournament, priority for the tournament will be given to those Clans, for which this province is an objective for their quest.

2.1.6 The first stage is considered as completed if a Clan has won the Landing Tournament and established its Headquarters on required Landing Province. A Clan has 36 turns after getting a First stage quest to complete it.

2.1.7 The first stage is considered as failed if:

If a Clan fails first stage, it will be given new task from first stage immediately after one of the mentioned points occurred.

2.1.8 If a Clan completes its first quest - lands on the Map, places its Headquarters, and captures the Control Center - the Clan gets the next quest: capture a province on which a Belluzzo Wheel can be collected. This province will be selected randomly from provinces adjacent to the province with the Control Center. The target province for this quest may be assigned within a 1 hour difference from the reference prime-time. If the target province is a Landing Province as well, a Clan must submit an application to participate in the Landing Tournament and win it to capture the province. The province will be considered captured after a Clan puts their Headquarters on it. AClan has 36 turns to complete this quest.

2.1.10 Capturing a Launch Pad provides an opportunity to move to the special event area: New Swabia. To move to New Swabia, a Clan must have at least 15 chips in Reserve.

2.1.11 A quest will be considered failed if a Clan's Headquarters is lost and is sent to the Reserve during any Stages. In this case, a Clan will get a new First stage quest, even if this Clan owns provinces on the map.

2.1.12 If a Clan runs out of time and does not move their Headquarters to a captured quest province, a new province will be randomly selected. It will be adjacent to the province where the Headquarters of the Clan is situated. This allows the Clan to continue their progress from the point at which it was stopped.

2.2.1 New Swabia is a special event area where Clans will be able to proceed with the implementation of the main goal of the Armageddon Event. The only way to get to New Swabia is through a Bridgehead, which becomes available only after the Launch Pad is captured.

2.2.2 A Clan that captures the Launch Pad will be automatically removed from the Map at a fixed time - 16:00 (UTC). All of a Clan's chips and its Headquarters will be sent to Reserve and will remain active. After that, the Clan will be automatically directed to the Landing Tournament on the Bridgehead - a province that is on the perimeter of the Secret Complex, which consists of Reactors and a Spaceport. Clan Fame Points for capturing a Bridgehead are credited only with the first landing on New Swabia.

2.2.3 If a Clan has been defeated during the Bridgehead Landing Tournament stage, or was knocked out from the provinces of New Swabia, the Clan will be automatically directed to another Landing Tournament on the Bridgehead. The number of attempts is unlimited. In case of a draw in a battle with the owner, the province will go to the attacking Clan.

2.2.4 After capturing a Bridgehead, the winner will have the opportunity to attack a Reactor - a part of the Secret Complex, which provides Clan Fame Points for its capture.

2.3.1 Clan Fame Points can be earned not only by fulfillment of a Clan's own quests, but also by creating obstacles to competitors.

2.3.2 The following additional missions will be available for completion: 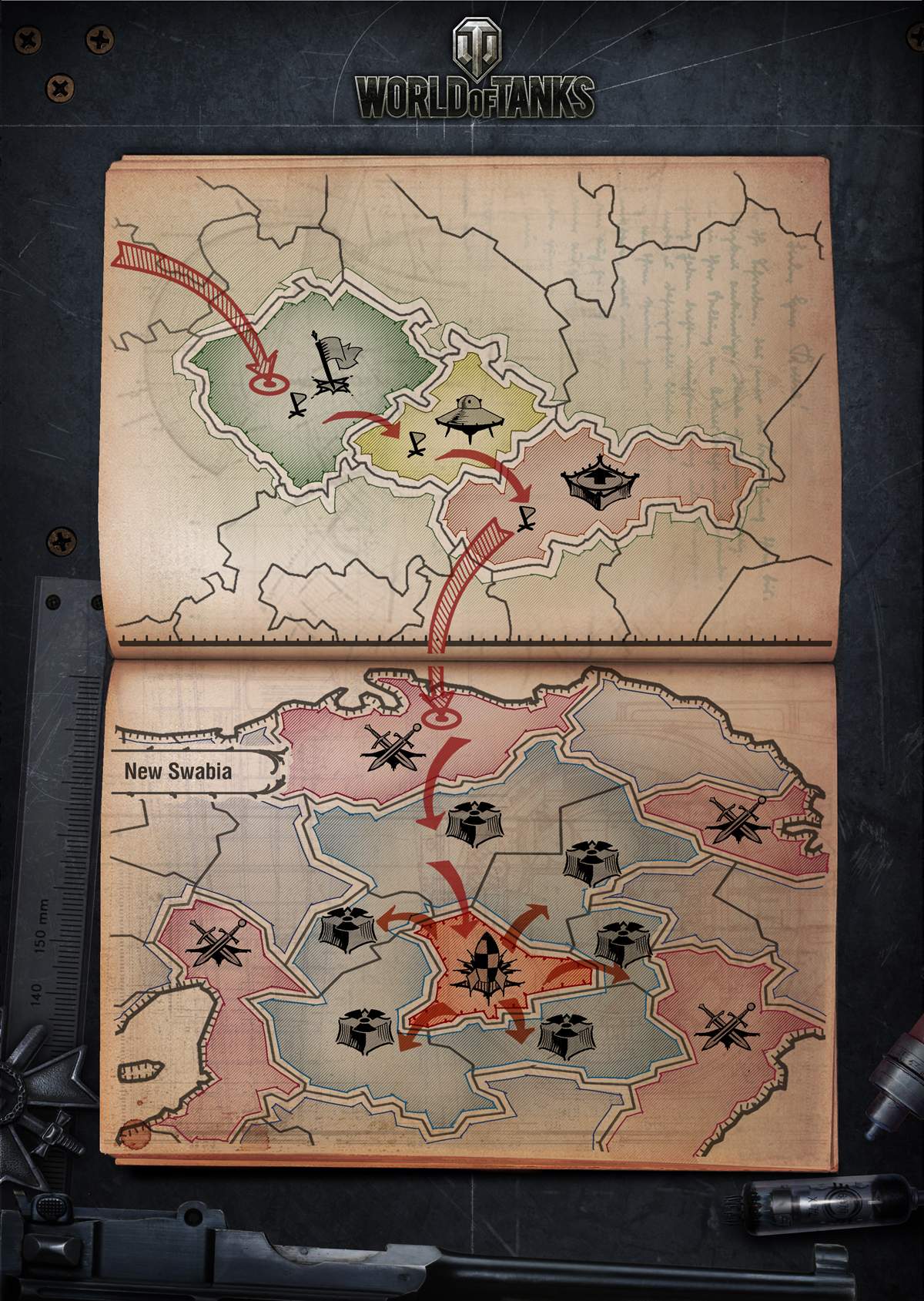 "Fake" battles are in violation of the regulations and will be punished by a complete Fame Points wipe or blocking of the offender's game account.

If disputes regarding FP charging appear ("faked" battle suspicion, etc.), World of Tanks administration may request a battle replay, screenshots or any other information regarding the situation. If the required information is not provided, the decision will be made by the World of Tanks administration. We strongly recommend turning on the replay recording option in your game settings. Please see this forum topic for more information.

3.1 By completing quests and participating in regular battles, Clans earn Fame Points according to the following conditions:

Information about Fame Points earned by a Clan will be available in the next turn after they were earned and will be updated every hour.

If a Clan has chips on a province and doesn't enter the battle, the 2nd and all subsequent absences will result in a fine of 10% of the Clan's total Fame Points

3.2 Personal Fame Points will be awarded based on the following formula:

EXP: total base experience of all players in the player's Clan divided by 15. Premium and other bonuses are not included in this value.

QPC: Battle Coefficient, which is based on whether the province is an objective for the Clan (see below)

3.3 All coefficients that are applied during the event are displayed in the tables below. The total number of Fame Points will be calculated after applying all coefficients.

Battle coefficient, which depends on whether the province is aimed for the Clan (QPC)

If a Clan leaves the map, Clan and Personal Fame Points are not removed. 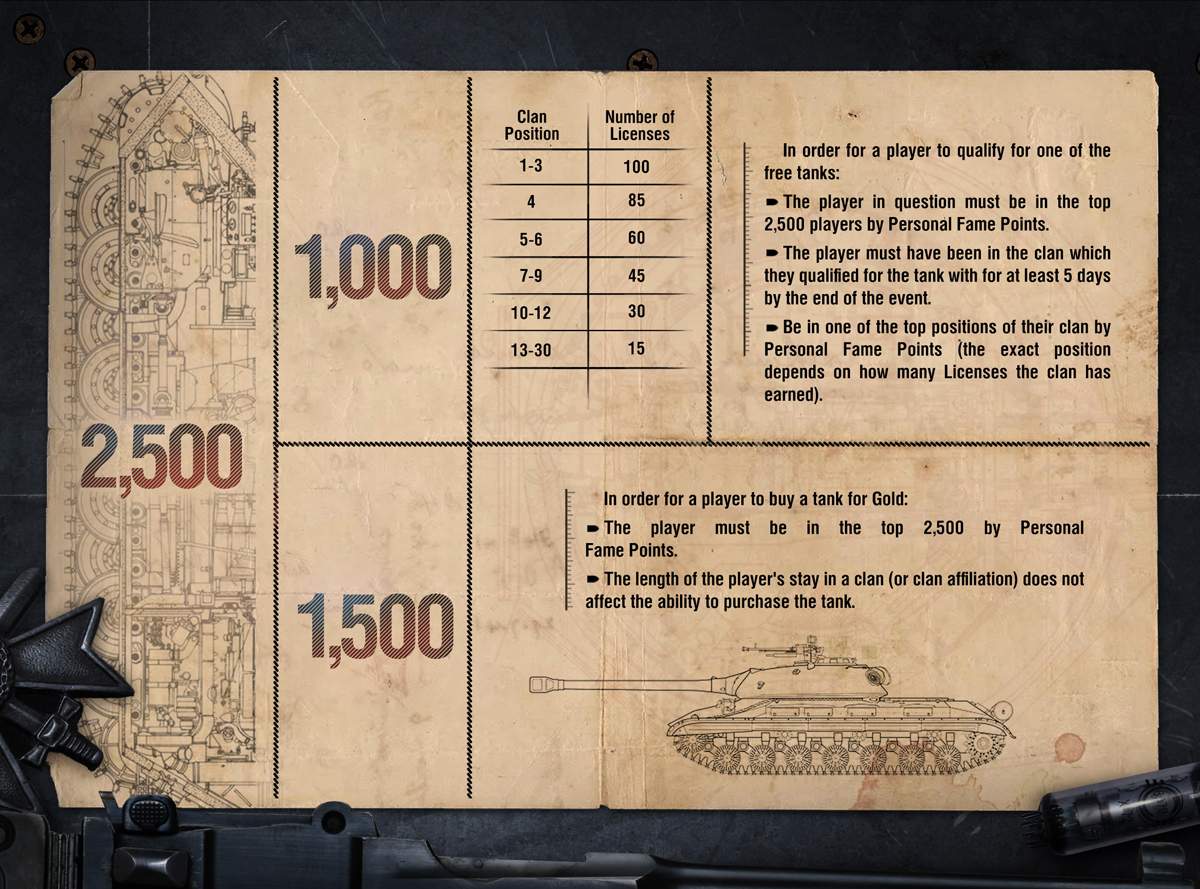 4.1 The main reward for participating in the event will be 2,500 IS-5 (Object 730) Tier VIII Premium Tanks, which will be awarded according to the following conditions:

4.2 The top Clans of the event will be awarded with licenses for tanks. These licenses free tanks will be distributed according to the Clans position in the Clan Fame Point ratings.

To get a tank in Clan which has a license for it, you need to be this Clan member for at least 5 days.

4.4 If a Clan wins more licenses than there are players on its roster, the remaining licenses will be distributed among the players who received the highest number of Fame Points, no matter which Clan they are in.

4.5 Those players, who manage to get the same number of Fame Points as the last players on the list of those awarded from Clan licenses or on the purchasing list, will get the prize tank as well, or the possibility of buying a tank. For example: in the range of 1-500 players, the player ranked 501 will have the possibility of getting a tank if they have the same number of points as the player ranked 500.

Clans that gather the same number of Fame Points as the last Clan from the prizing rank will get the same amount of licenses. For example: a Clan that takes rank 13 and has the same number of points as the Clan ranked 12 will get 30 licenses. The next Clan that earned fewer Fame Points, will get 15 licenses (counts as if the Clan ranked 13, not 14). This principle applies to the entire table of license distribution.

4.6 1,500 players who hit the top 2,500 players by the number of Personal Fame points, but are not included in the players won the tank for free will be able to buy a premium tank IS-5 (Object 730) Tier VIII Premium Tank for 12 000 Gold until July 15 2015 (inclusive). This possibility applies to players regardless of Clan affiliation. The option to buy the tank will be possible through the Event Map interface.

4.8 IS-5 cannot be obtained twice by using free license and purchase of game gold collectively.