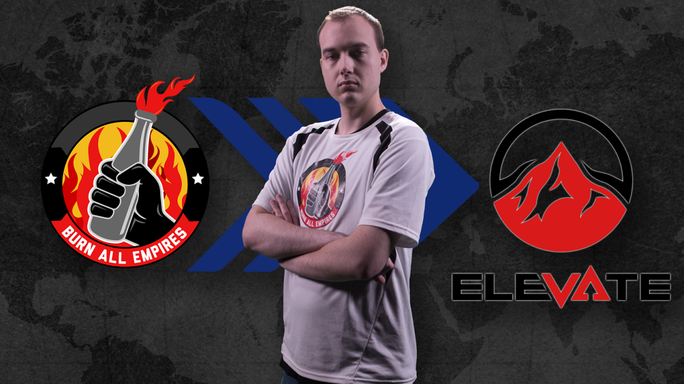 Burn All Empires is reshaping their team and changing their name following a “surprising” announcement by their new sponsor eLevate. As The press release explains, "In a surprising but timely move, we are announcing that Burn All Empires (BAE), a WGLNA Gold League-level team, is merging with eLevate to join our already-strong contingency of World of Tanks players.” This new team will be known as eLevate BAE.

The announced roster is made up of the core Burn All Empires roster, with the additions of Serenity17 from Victorious Secret, Zoidbergenstein from eLevate, and Lost from eLevate. Serenity17 threw in with Burn All Empires for their Rumble in the West (RITW) tournament run, where they finished fourth. His history of high performance on Victorious Secret in Season 4, combined with a convincing performance in the RITW, make him a predictable addition to the roster.

Three new players joining eLevate also forces removal of three players from the original Burn All Empires team. Tarho and Revant played no matches in Season 4 and predictably have been discharged from the roster. The third player dropped from the team, sbmhawk, was more of a surprise. ”sbmhawk was a casualty of the format change," said GeeForcer. "He had always been a T1 specialist, a role he excelled at. With the switch to 7/54, T1s aren't used anymore. We were hoping to transition him to a tier VII player, but things just didn't line up. He's been with us since the beginning, and has always been super committed, and we are all sad we had to let him go.

“Sometimes captains are forced to make very difficult decisions and this was one of those times. I, along with a couple of our core players decided we had to do what we thought was best for the team. We want to be as competitive as possible this season and I feel we made the right call.”

In an interview with zoidbergenstein, he confirmed that eLevate has also created a second team to compete in the upcoming North American Silver League. The team is called eLevate Red in keeping with the eLevate colors. The roster will consist of members from the old eLevate roster and Revant from Burn All Empires.

The official registered roster for eLevate BAE is listed below, along with the departing players.