After the single-most unpredictable and exciting regular season in WGLNA history, the playoffs are finally here, and with the added pressure of postseason play, it’s time to see who has enough game to step up when the stakes are highest and take their teams to the Live Finals in San Francisco.

By finishing in the top two in the regular season standings, The Cunninghams and S.I.M.P. have already earned their automatic bids into the Final Four, with the eight remaining teams now left to battle over the final two spots.

I Love Lamp and eLevate BAE head into the playoffs on fire, with each team winning eight of their last nine matches, meanwhile, teams like Simple Tankers, Hammer Time, and FeaR (Full Potato) all looked poised to make a push toward the Live Finals thanks to their stacked lineups and advanced strategies. Not to be overlooked, Simply IrresisTABLE definitely has what it takes to pull off a few upsets, while defending champs RUlette, made a late run to squeak into the playoffs, and now could be one of the scariest teams to play thanks to their experience under the lights. 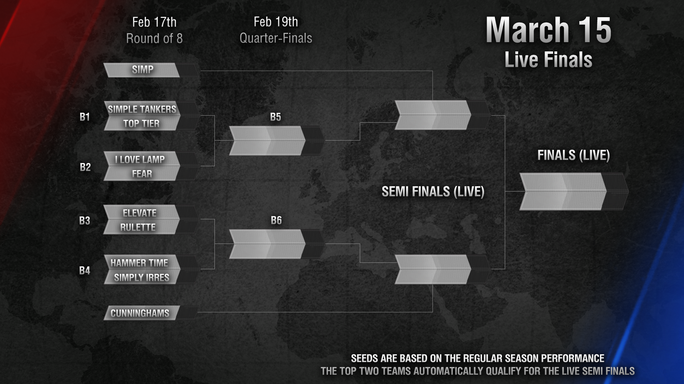 But there’s more than money on the line, as the Top 6 teams (S.I.M.P., The Cunninghams, and the four teams who win on Tuesday) automatically qualify for WGLNA Season 6, with teams 7 and 8 forced to win relegation rounds if they want to remain in the Gold League. Everyone else? They’ll have to earn their place later on through the Gold League Qualifiers, otherwise it’s back to the Silver League.

Matches kickoff Tuesday night, with the winners advancing to play Thursday beginning at 5pm PST. Be sure to catch all the action live on Twitch, as this is sure to be one of the wildest playoff rounds in WoT’s history.