If the first round of the WGLNA playoffs is any indication, expect the unexpected as we move into the quarterfinals Thursday night.

The defending champs? Eliminated. FeaR, the team that was rolling into the playoffs as hot as any team to go along with their new sponsorship? Bye-bye. Simply IrresisTABLE, the upstarts who were looking for their shot to shut-up The Cunninghams? Done.

What that leaves is four hungry teams, but only two open spots remaining to compete in the WGLNA Live Finals in San Francisco, on March 15. 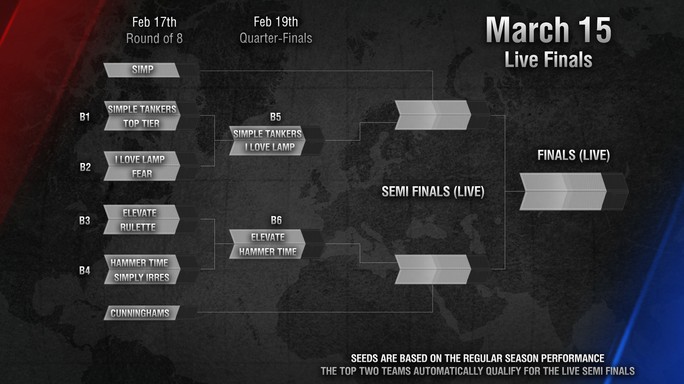 In the first match, we have I Love Lamp, a team who has now won nine of their last ten, squaring off against Simple Tankers, possibly the most underrated team still playing, as despite their third place finish in the regular season, their squad is seldom mentioned when talking about who will make the Final Four.

On the bottom of the bracket, it’s eLevate BAE, another team riding high after winning nine of ten, taking on Hammer Time, a veteran team who many think have a chance to win-out all the way through San Francisco and leave the Finals with the North American trophy.

”At this point, the teams are pretty even, so it all comes down to who can overcome their nerves and play their best on the biggest stage,” says WGLNA commissioner Chris “Yoott” Karlewicz. “I can actually see any of these four teams, not only winning tonight, but potentially winning it all.”

Who will come out on top? Check out the WGLNA Twitch stream Thursday night beginning at 5pm PST to see who will be joining The Cunninghams and S.I.M.P. in San Francisco for their shot at being crowned the Gold League’s number one Tanks team.