In what could turn out to be the most unpredictable WGLNA Finals in history, four teams played their way to Vegas, with the winner guaranteed to not only take home $75,000, but also a spot in the upcoming Grand Finals in Poland.

Here are all the details you need to know before this electrifying event.

The tournament kicks off Saturday, February 27 at 13:00 PT on BattleViewer.com. All the action will be called by casters David "Nagatron" Williams and Christian Toma.

Heading to Vegas? Then join us at the Downtown Grand Hotel to watch us crown a winner live and in person. Doors to the hotel's Fremont Room open at 12:45 (local time). For those looking to stay at the hotel, you can use the code TANKS when reserving their room in order to receive a special discount.

The four-team playoff will be played under WGLNA's 7/68 rules, meaning each team must have seven tanks of 68 total tier points (for example, six tier X tanks with one tier VIII). There are restrictions: each team can only bring two of the same type of tank to each battle. So while the T-22 Medium has become the tank of choice this season, teams are still limited to how many they can bring. Other popular tanks include the IS-7, FV215b, Bat-Chatillon 25 t, T-54, and the Object 140.

Nine maps are available for Gold League play, with each team given the right to ban three maps each before matches begin. Each team then picks one map to play after the banning, with the final map being discarded. In the case of a tie, a tiebreaker map (predetermined by WGLNA commissioners) will be provided. The WGLNA map pool consists of Steppes, Cliff, Mines, Murovanka, Prokhorovka, Himmelsdorf, Sand River, Ghost Town, and Ruinberg. 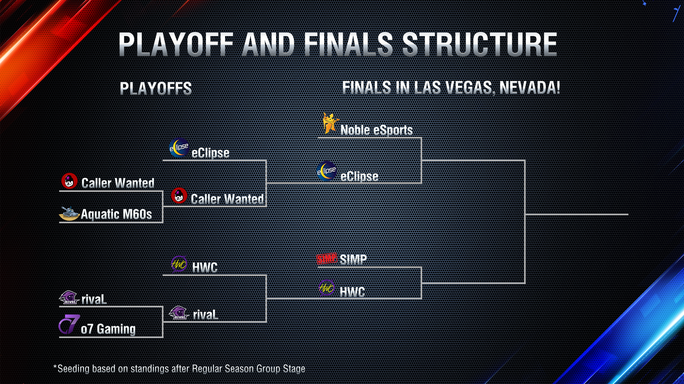 Noble eSports wasn't just the top team throughout Season II, they're the defending champs, and they have their sights set on proving once and for all that a team from North America can compete on a global level at the Grand Finals. But first things first, they have to get by a tough up-and-coming team in eClipse, with SIMP, the only team they lost to all season, sitting on the other side of the bracket in a possible Finals match-up.

Noble is led by AKulaV, who finished in the Top 5 statistically in average damage dealt (2,066), not to mention, was Top 10 in average kills per battle (0.95). He's joined by other standouts, Canadianimpact, militant83, Jerm, and Dodoma, to lead what has become the most formidable attack in WGLNA.

The boys from eClipse are no easy match, though. They've risen from Silver League champs to a Gold League Cinderella story thanks to the scintillating play of Masterpupil, T1_Diabetic, drawkcaB, and TigersLovePepper. If they manage to take down the defending champs from Noble, this team of young guns could catapult themselves to the global stage in only their first year of Gold League play.

On the flip side of the bracket, the super team of High Woltage Caballers takes on SIMP. HWC strutted into Season II as the early favorites, but after losing last year's MVP Dakillzor due to suspension, the team looks vulnerable for the first time. They lost to Noble (1-5), barely squeaked by o7 (5-4), then lost to AM60 late in the season (3-5).

And while Blueboyzcaptain, OxThief, and Wallhacks stepped up big-time after the loss of Dakillzor, there are plenty of whispers around the league that HWC isn't playing up to expectations, with a surprising amount of fans and pros alike expecting them to lose to SIMP in the first round.

Speaking of SIMP, they are the WGLNA's version of the New York Yankees. They're the perennial powerhouse who always seems to be in the mix for the championship, and like the Yankees, they aren't afraid to shake up their lineup with new acquisitions if it means taking that final step to title town. Not only did SIMP add E63M6 and Rude_Awakening after the first roster change period (moves that greatly improved the team's dynamics), the team also added fan favorite Cooliano (formerly Refuse's Cool_Hammer) during the final roster change.

It will be interesting to see how Cooliano fits into an already deadly lineup that features the likes of Adroxis, Crimson_Corsair, Nitts, PhotoFinish, and Overlord_Prime. They've been the league's hottest team since the new roster was introduced, and that early win over Noble could play mind-games with the defending champs if the two meet with everything on the line.

Who's going home as champions? You'll have to check out BattleViewer.com to see NA's four top teams fight it out!