When it comes to playing World of Tanks, some gamers see it as a hobby, but for eSports professional (and eLevate team member) Jonathan “zoidbergenstein” Pickard, it’s his full-time job.

That’s right, thanks to eLevate’s deal with MLG.TV, the man they call Zoid is now making a living doing nothing else but playing Tanks.

And his bankroll has a chance to get even fatter come Sunday, as eLevate competes for their share of Season 5’s $171,000 prize pool, where the winning team splits a sweet $75K.

Wargaming caught up with Zoidbergenstein after his team flew into San Francisco to prepare for this Sunday’s Live Finals (matches begin at 12:15pm PDT on Twitch).

Here’s what he had to say …

What are your thoughts as we head into the Live Finals this Sunday?

Right now, we’re all just really excited. Our team put a lot of work into World of Tanks this season, so the fact that we’re here, it just means that all that hard work is finally paying off.

Team eLevate merged with Burn All Empires heading into Season 5. How difficult was it for the two teams to mesh and find cohesion on the virtual battlefield?

We were friends before the season started, so we all liked each other, and that made it easy to just start playing together. But at the same time, the new players had to learn a new style of calling, a new style of strategy, and it was difficult, not only for the two brand new players we added to the team, but for the Burn All Empires guys as well. Fortunately, we were all friends, but it definitely took a little getting used to, and you saw that reflected in our early record.

When was the first time you realized the team was clicking in a way where you guys had a shot to win it all?

We started winning when there were nine games left in the season, and two or three wins into that streak, we really started to click as a team. It was then when we realized, you know what, we’re playing as good as anybody in the league right now. 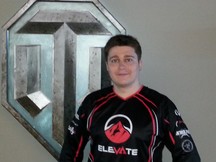 You mentioned how you were friends with the Burn All Empires crew before. What about their playstyle made you think that the two teams merging would become such a success?

Their style was a more advanced, more technical style of the version we played. We saw the strategies that we tried to run, and those strategies were just run and executed so much better by Burn All Empires. We’ve really learned so much from them. Burn All Empires is a very, very talented team who had been highly successful in World of Tanks, and they’ve taught us a lot about the game. At the same time, we entered the merger bringing a lot of eSports experience to the table. The Live Finals is actually going to be my 130th live event. I’ve played in five different World Championships across a variety of games. So I’ve had that world-level experience where I can help by telling them, this is what we need to do in terms of communication, this is what we need to do in terms of practice schedules. They have the raw skill in World of Tanks, and combining those two facets has really, really been successful.

Before World of Tanks, what other games did you compete in?

Sounds like you’ve been able to make a living playing video games for a long time now.

When I was 18, I was making my living playing video games, then I became an eSports consultant and I also sold real estate for a little bit, but after I went back to school and received my degree in game design, I’m back to doing what I enjoy most, and thanks to our sponsorship with MLG.TV, I’m back to playing video games for a living. My full-time job right now is playing World of Tanks, so needless to say, our sponsorship with MLG has been huge. I stream from 9-5 every single day, and I even stream some evenings. We play a ridiculous amount of World of Tanks, so it’s huge to have this outlet where people can watch us and we can run advertisements. It enables us to bring in money outside of winning tournaments. If you’re a young team or a new player, there is nothing more important in building your brand and getting sponsored than streaming. Twitter is important, social media presence is important, but when sponsors look at, can this person sell our product, can this person represent our product in the public eye, it’s all streaming.

This Sunday, eLevate takes on the top team in Tanks, The Cunninghams. What is it going to take for you guys to come out on top?

I have tremendous respect for The Cunninghams. They are a tremendous team, and obviously, they’re ranked number one going into this tournament, but fortunately, the WGLNA Fantasy site has demos from every single match that got played this season, so we’re able to go on there and look at the maps that we think they’re going to play and scout out how they play. But really, when you’re playing on a professional level, instead of trying to play their game, we want them to play our game. And because we’re such an aggressive team, I think we’ve excelled in the latter half of this season. We’re good at making other teams play our game, then beating them at it.

Ruukil said that you guys play so aggressive, eLevate is either going to win it all or lose in the first round. He doesn’t see any in between. Fair assessment?

Zoidbergenstein: [laughs] Yeah, it’s very possible. Like I said, I have tremendous respect for The Cunninghams. They’re a very intellectual team, and if we play their game, they’re going to beat us, so we have to force them to play our game.

On the flip side of the bracket, you have S.I.M.P. taking on I Love Lamp. How do you see that match shaking out?

What do you think of the young upstarts from Lamp?

I love seeing Lamp here. I think they’re fantastic. It’s their first season in Gold and here they are at the Finals. But it’s the first time they’re playing on a tournament stage, and I think nerves might get the better of them. I hope it doesn’t, but it can get nerve-racking when you have a live crowd chanting and pointing out your every mistake with cameras in your face. I know the first time I did that, I was nervous.

For eLevate to win the Season 5 title, who is going to have to play a big game?

Serenity, statistically, did the most damage in the league, so obviously, if he can do a lot of damage, that’s going to be very important. I think there’s also a lot of pressure on Zone, our caller, but if those two are able to step up, I think we have a shot. But World of Tanks is a game where everyone needs to pitch in. Our tier VI’s and tier VII’s need to go out and do damage. Our caller needs to call well. Our damage dealers need to do damage. Statik likes to joke that his job is to take hits, so he needs to take those hits well so the rest of us can do damage. It’s going to take everybody to win this championship. This isn’t just a regular match, this is the WGLNA championship.

So for fans out there, give us your pitch. Why is eLevate going to win the Season 5 title?

Our aggressive strategy is going to bring this championship home. I want to be in Poland for the Global Grand Final, that’s been our goal since the season started, and for us, the only way we’re going to get there is to win it all. That’s exactly what we’re hoping to do.