Fantasy Tanks: How to Pick the Best Lineup

Struggling to keep the pace in Fantasy Tanks? You're not alone as thousands of people are now competing for prizes on a nightly basis, and the rollercoaster ride of watching your team rise then plunge down the leaderboard can leave even the biggest trash-talking fantasy expert left feeling dizzy (especially when your ace tanker doesn't show up to battle!).

To help all those fantasy freaks out there looking for an edge, here's some advice on team picking as you look ahead to not only winning the nightly prize, but to quarterly and yearly prizes like that trip to the WGLNA Regional Finals.

One of the biggest mistakes people make is picking players based off their last match. Yes, it's important to look for trends, and yes, it's great to pick the hottest scoring tanker, but there are a lot of factors that come into play when picking the best lineup, and just because someone scored over 500 points one night, doesn't necessarily mean that they'll repeat the feat during their next match.

The reason for player scores ballooning one night and deflating the next all comes down to opponent strength. Take the tankers from Noble, for example. Are they the best team in the league right now? Of course. Is militant83 tearing opponents up on the battlefield? No doubt. But at the same time, this isn't fantasy football where every team is only playing one game. In fantasy tanks, Noble's dominance as a team is their downfall in fantasy. If Noble wins 5-0, that means that their team (and their opponent) is only playing 5 battles that night. Meanwhile, when more evenly matched teams like Caller Wanted and DING_NA or SIMP and eClipse play, they're taking their match to 8 or 9 games, giving each of their top players more games in which to score.

When picking players, the first thing you should do is change the sorting to Points Per Battle. This is the single most important stat to use when picking a team. By looking at how many points per battle a tanker scores and the upcoming schedule, you will be able to mathematically anticipate your team's performance. 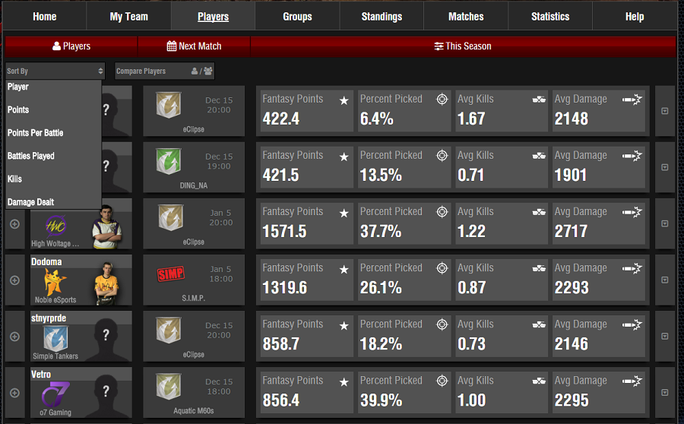 Like we said, if militant83 averages 52.6 points per battle, but you anticipate Noble to stomp their opponent 5-0, you'd be better off taking someone like T1_Diabetic from eClipse if you think eClipse's match-up is more likely to go to 8 or 9 games.

But sometimes, even the most statistically advanced teams will fall, and most of the time that's because a player who is tearing up the league, someone like 7Tesla, for example, will simply not play. Work and school have a way with messing up fantasy lineups, so remember to follow your favorite tankers on Twitter and stalk the forums for posts by pros like HWC's OxThief, as many times, the pros have the inside track on who is (and more importantly, who's not) playing that night, and it's those little nuggets that could mean the difference between you moving into the Top 10 or falling like a rock to the bottom of the standings.

And remember, WGLNA league play takes place Tuesday and Thursday nights beginning at 17:00 PT, so make sure to select your teams before the first match (and roster cutoff time) begins.