"Trio?" Worry not -- it's definitely a quartet in this region!

The Battle of Berlin lasted from approximately April 16 through May 9 of 1945. While the Berlin Garrison surrendered unconditionally on May 2, the fighting continued for several days as orders reached scattered German units who wanted to surrender to Western Allied forces.

This year, we mark the occasion with the introduction of four unique Premium vehicles based on the historical paint and appearance of late war tanks, three of which are famous for participating in the last days of the conflict in Europe, and one of which became famous later:

Cromwell B: Decked out in the coloring and equipment of the British 7th Armoured Division. The "Desert Rats" were issued with Cromwells in 1944, and fought across France and into Germany.

(In this case, "B" is not a designation, but is for Berlin, to distinguish the tank from its tier VI non-premium brother.)

Soviet IS-2: A heavily armed and armored unit used for taking strongpoints and fortified cities, these tanks were given thick white stripes towards the end of the war for identification by other Soviet vehicles in the heat of battle.

This Soviet IS-2 is based on tanks in the 7th Guards Independent Heavy Tank Brigade, as made famous in an iconic photograph taken in the heart of Berlin, however ours is No. 432, not 404. 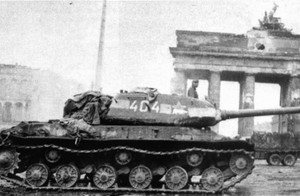 It's no error! Tank 404 of the 7th Guards Heavy Tank Brigade in front of the Brandenburg Gate

ISU-122S: A heavy assault gun built on the tough chassis of the IS heavy tank, this beastie was used to great effect against German heavy tanks and fortifications. After entering service in August 1944, the 657 ISU-122S vehicles and their potent guns made a strong impression on the enemy forces.

With Berlin's surrender the most devastating conflict that Europe had seen in its entire history was at an end.