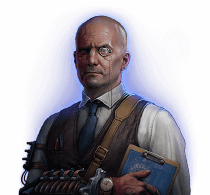 The monocle did not sit properly. Von Krieger put it aside and took out of his secretary desk the old glasses he wore when he defended his thesis many years ago. Since then, his eyesight had worsened a little, but the glasses were enough to go through the papers in front of the engineer.

"The nerve of these people!" von Krieger finally snorted, then he snatched one sheet from a pile of papers. "Look what they say. They could have at least stated my full name. Is it a personal file or what? 'Max von Krieger, formerly known as Hoffman.' What am I to them—a fugitive lab assistant or what? My name is Maximilian Leonard von Krieger-Witthoffen, Baron zu Ledensburg. They could have learned it in all those years I worked for the Alliance. They owe me a lot, but I guess it's hard for the Harriers to memorize so many words at once."

Von Krieger took a pencil from behind his ear and moved it along the line, muttering what he was reading under his breath. His eyes, trained to read all the time, were able to catch all the important information in the text, but the university habit of following a line with a pencil never left him.

"'Born in 1900'—okay, correct. 'Technical University of Munich'—sure, close enough. But they could have specified the Mechanical Engineering Department. What do we have here? A scientific degree, publications in magazines, patents... Not bad. They managed to unearth most of it. Once again, I am convinced that professional life is more important to them than personal life. 'Max von Krieger.' Sounds like some countryside milkman! Oh, look what else they say: 'Was inspired by the works of Nikola Tesla and the developments of Thomas Edison.' Inspired! Yes, of course, I am familiar with their works, but all my main inventions are original and unique. The fact that I became close friends with electricity does not mean I was 'inspired by Tesla.' I might as well have been 'inspired by Zeus or Thor.'"

The engineer took a sip of the now cold coffee that Ermelinda made in the morning. Without coffee, he couldn't really work, collect his thoughts, and concentrate. This was probably his only bad habit.

"Oh, here's the paragraph about my relationship with the Alliance!" von Krieger exclaimed triumphantly. "Time to learn what nasty picture they're painting of me to their mercenaries. Let's see... 'Bypassed the ban on the construction of a combat vehicle weighing up to 80 tons.' Of course I did! What platform do they think I needed to mount the Gungnir on? The Opel Blitz? Or whatever kind of army tractor they have... 'Deliberately sabotaged the development of the project, destroying most of the technical documentation.'" At this point, the engineer suddenly laughed and threw the sheet of paper back on the desk.

"Do you hear what they're saying? Destroyed! Of course they cannot tell the truth to their watchdogs, because it greatly discredits them in the eyes of their mercenaries. I did not destroy anything—I made copies of all the documents I was interested in and made changes to the originals that were insignificant at first glance and completely invisible to their inexperienced eyes. Here, I changed 10 to 0.1 in the formula. I made some changes to the circuit diagram there. Somewhere else, I made some changes to the blueprints. For two years, they tried to assemble a mechanism that was designed to be inoperative! For two years, they didn't understand that they were following the wrong trail. And I worked hard. With such a head start, it wasn't difficult to make up for the mess that the Alliance caused by taking the laboratory and all the workshops. I basically built from scratch this entire industrial center, which is about to start assembling and modernizing itself! I created... WE created an indestructible barrier that Alliance amateurs can only dream of. You did a great job. I am very grateful to you for this dossier. The best gift imaginable—these papers only confirm that my opponents are completely helpless. See: 'Unmarried, no children.' Why do the Harriers even need this line? Not only is it useless, it's also a complete and utter lie. If only your mother knew that my former employer would brand me as a bachelor."

Von Krieger took another sip of coffee and took a hard look at Ermelinda.

"Do you know why they haven't found us yet? They don't know that outside their world of bureaucracy and corporate dominance, there's also this one where you and I are right now. They cannot even assume that I've not only learned to pass through the subspace (which they call 'teleportation' like simpletons!), but that I'm also able to stay in it for as long as I need. Needless to say, I brought all my developments here along with my laboratory and established a base. They're looking for us on the surface, you see? But they have no way to get here—both of our clashes only took place because I wanted them to. I needed it, not them. I needed a proving ground to perfect my work, so they sent the Harriers. You needed to fine-tune the Sentinels in a real battle, so they sent the Harriers. The Alliance, without knowing it, continues to help with my research—and even help with the technical progress for the whole world! Represented by me. We fooled them for the second time! The second time, we went into the shadows—here again, in the subspace, where we will continue our work for as long as it is required. Maybe I should send them a thank-you note via carrier pigeon? The experience gained is enough for several interesting technical solutions. Such a pity that we have to leave our impregnable Asgard to resupply... Here you can build an entire empire of technocrats. The perfect world I dreamed of when I was still a student..."

Von Krieger went silent and shoved the scattered pages of his own dossier into the secretary desk.

"Do you know what their main problem is? They consider me the enemy of all mankind. Almost all of them." The engineer took the letter from Villanelle that was laying separately on his desk and carefully put it in a folder with personal notes and important documents. "But all the aggression I show is aimed only at them. And only because they once betrayed me and deprived me of the opportunity to work for the good of humanity. Who knows if we will face them again, but trust me, daughter. We will be ready. One day, the Blitztrager will be history. One day, our photos will appear in textbooks, and I will return to the Technical University of Munich, at least in this form. In the meantime... Put the kettle on—time to get back to work."