Last month we featured the German Jagdpanther which was designed to oppose the Soviet T-34. The Germans then upped the ante with Tigers and Panthers, so the Soviets moved on to invent the T-34-85. To facilitate your newly found interest and respect for these fighting vehicles, this month's credit bonus goes to both the T-34 & T-34-85!

Tanks of the Month Bonus

The T-34 may have never existed if not for its predecessor the T-20. In 1938, Mikhail Koshkin, a prominent tank design specialist, was assigned to design a replacement for the BT tank. The BT line was unusual in that they were convertible tanks. This meant they could roll out on either tracks or wheels, depending on mission requirements and terrain restrictions.

Koshkin managed to come up with two new tank designs: the A-20 (armor thickness of 20 mm, hence the figure in the name of the model) and the A-32 (armor thickness of 32 mm). The A-20 was a convertible tank, while the A-32 was not. Both prototypes were presented on the September 23rd, 1939. The T-34 was an improvement based on the A-32 prototype featuring increased armor thickness.

The first two units were produced in February, 1940, under the T-34 designation. Its armor was thicker than the Panzer equivalent and its tracks allowed it to operate on rough terrain. The mobility was excellent and the emergency starter device with compressed air allowed it to start in even the most freezing conditions, something the German tanks were not able to achieve. In addition, the T-34 was relatively inexpensive  to manufacture and could be produced in great numbers, a big advantage over Germany's expensive vehicles. The T-34 was the second most produced tank in history, with more than 35,000 units made between 1940 and 1944.

In June 1941, the Germans launched Operation Barbarossa - the invasion of the Soviet Union. But they did not realize that the Soviets had developed the T-34, and its advantage of sheer numbers was a surprise for the German Army.

The German army took three years to develop another tank which can outperform the T-34. It was the Panther. Thus, the Soviet Army increased the armor of the T-34 and mounted a bigger 85 mm gun. This model was called the T-34-85, and it was used effectively as a ramming force for not only against the German army, but to push back the Japanese army in Manchuria in August 1945.

The T-34 and T-34-85 in World of Tanks are both medium tanks. The T-34-85 is the next vehicle after the T-34, so it has more hit points and armor. In some aspects, the tactics are similar with both tanks, but there are some differences dictated by armament.

The in-game T-34 is a medium tier V Soviet tank, characterized by an excellent speed (56 km/h) and very good maneuverability.

The T-34-85 is medium tier VI. It is more resistant to enemy fire and while its maximum speed is much the same as the T-34 (54 km/h), its superior horsepower allows it to reach this speed faster than its predecessor.

Each tank can be mounted with four different guns that can be filled with three different types of shells to adapt each shot to every situation. The main difference between the tactics of the T-34 and T-34-85 comes from the armament. With the large caliber guns you can employ similar tactics – the 76mm S-54 at tier V is generally similar to the 85mm D5T-85BM at tier VI, with adequate penetration and damage. However, the T-34 can also have a fast-firing, accurate ZiS-4 gun, while the T-34-85 does not.

As with all medium tanks, you can play multiple roles. Be a scout in high tier battles, or the main destructive force in a low tier battle. In both cases, the key is your mobility. Don’t stay still for too long. Your good rotation and maximum speed are useful for avoiding enemy shells, and you can also execute fast maneuvers to overcome less agile heavy tanks. By circling around and avoiding the gun sights, you can dominate a heavy tank. Your shells won’t destroy it in one shot, but you reload faster and you're more manuerverable so you can do more damage-per-minute to to finish it off with effective flanking techniques.

One thing to be careful of is that your tank is quite long. Make sure that in the rare cases you don’t move, your rear is always hidden behind a rock, a building or even an allied tank. This should be easy with the T-34 as it has a small silhouette. 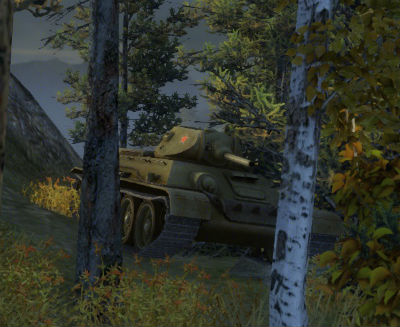 Now, let’s take a look at each module you can upgrade on your tank in more detail.

With both tanks, you can mount all the available modules without upgrading the suspensions, but the T-34-85-60 for the T-34-85 and the Model 1942 for the T-34 will offer you a faster rotation.

The main reason to upgrade the engines on both tanks is to reach the maximum speed quicker. If you want to make thrilling maneuvers, it's necessary. 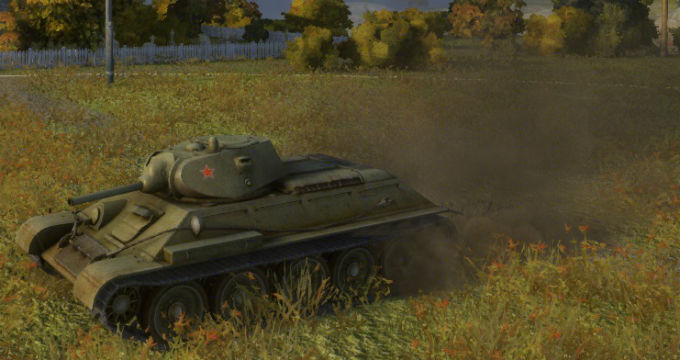 You can mount all the guns available without upgrading the stock turret, with the exception of the top gun, the S-54, which needs to be researched after the top turret, the T-34 Model 1942. However, the Model 1942 is worth investing in even if you don’t use the S-54 gun, because it is thicker, rotates faster and has a longer view range than the stock turret. So research it as soon as you can to become more efficient!

You also have two turrets available for this tank, but the purpose of the top one is mainly to mount the top gun, the D5T-85BM. Having this powerful gun is a good reason to research it!

To see the differences between the stock and top turrets,click to enlarge the images.

If you have just researched your T-34 from the A-20, you can re-use the ammunition for its L-11 gun to load your T-34 stock gun. This means that you don’t have to load new ammunition when you buy the tank. This will save you money for buying shells for the upgraded guns.

The choice of which of the next two guns to use is a matter of taste. The F-34 is a good improvement over the stock gun. It aims faster, reloads faster and penetrates better. You will have to research it if you want the ZiS-4.

The ZiS-4 is the fastest to reload, and is more accurate. Its penetration value is the most important of the four guns available. Use it if you prefer to shoot from far away, but note that the damage won’t be really effective if you shoot at higher tiers.

The S-54 is not in the same line of the other guns, and can be researched after the top turret. This is the gun capable of dealing the most damage, but it reloads slower than the ZiS-4. This is the top gun to use if you know how to target weak spots to cause critical damage. In any case, you will need to research the S-54 gun if you want to unlock the SU-85 and start down the great tank destroyer line, or to continue on the medium tank line with the T-34-85.

The top gun, the D5T-85BM, is Tier VII, and it has very good average statistics. Fast reloading, good penetration, good damage… this is the all-in-one gun. However, to unlock it, you will need to research its dedicated turret – the T-34-85 enlarged.

The ZiS S-53 will need to be researched anyway if you want the Tier VII T-43. As it is a Tier VI gun, it's better to mount it than to keep the stock one, which is only Tier V.

If you prefer to mount a heavy caliber gun, think about the U-11, which is 122 mm and deals the highest damage of the four guns available. This is the best gun to use if you know the enemy’s weak spots, or if you shoot at close range, as its penetration and dispersion are not as efficient as the other guns.

If you researched the radios from the T-80, you already have the top radio available for both the T-34 and the T-34-85. It is the 9RM, which is a tier VIII radio, and allows you to know where all your teammates are located with its 525 m signal range.

If you don’t have this radio yet, we strongly recommend you to research it after the stock radio of the T-34, and re-use it as soon as you buy the T-34-85. A tier VIII radio in a tier VI tank is quite a good investment...even if you can’t tune in to your favorite channel.

Let’s also talk about the devoted crew who will serve in your new machine. Don’t forget that a fully trained crew heavily improves the statistics of the tank. Don’t think that it's a waste of money to train your crewmen when you buy a new tank, it really changes everything.

You can choose to teach them skills or perks according to what you want to do with your tank. Go for those related to the speed and maneuverability of the tank, such as Clutch Braking, Off-Road Driving or Smooth Ride for the driver. Don’t forget the Brother in Arms perk, to increase your whole crew qualification level. As a scout tank, the Signal boosting, Relaying and Situational Awareness skills are useful for your radio operator. And don’t forget the Mentor or Recon skills for your commander.

The T-34 is a Tier V Medium tank, descending from the tier IV A-20 or the tier IV T-80 in the Soviet tech tree. From this tank, you can research the tank destroyer SU-85 and start this branch from on tier V, or continue in the medium line with the Tier VI T-34-85. These two vehicles are available to research once you have unlocked the top gun. 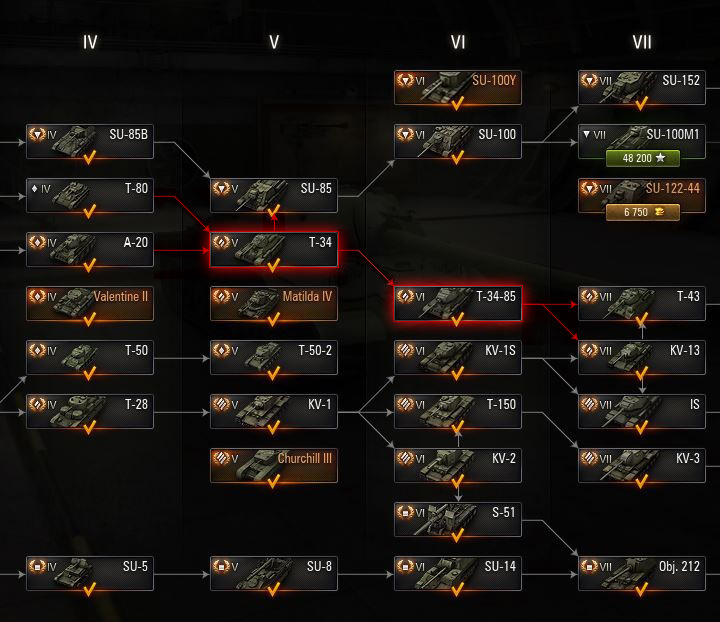 Now you know everything, are ready to battle? Of course not. Don’t forget to fill your tank with helpful equipment and consumables! The T-34 and the T-34-85 have basically the same needs. As you will be moving with the main part of the battle, be sure your tank is fully equipped. The Toolbox will help you to repair quickly. We also recommend you add Improved Ventilation to make your crewmen more efficient, especially if you also trained your crew with the Brother in Arms perk. If you want to load faster, you can also mount a Rammer.

For consumables, don’t forget to always take a repair kit, whether small or large, and if you want to be prudent, you should also take a fire extinguisher. Always treat your crew with first aid kits. Removing the speed governor (don’t forget to equip the Cyclone Filter if you do!) or fueling your engine with Lend-Lease Oil is useful for tanks which need to prioritize mobility.

We hope you enjoy driving the red-starred vehicles this month. Alternatively, use this article to spot the weak points and destroy them!

Do you like the image that accompanies this news? It's available as a wallpaper! Download it below in the size that best suits your screen.