Please Note: Onslaught is part of the current Common Test for Update 1.18.1. Certain game mode values may be subject to change before the official release.

The Rating System and Matchmaking

Onslaught is a new competitive game mode in World of Tanks. Unlike Random Battles, where the team composition depends on the vehicle selection, Onslaught battles are fought in Tier X vehicles with similarly rated commanders.

The matchmaker considers each player’s position in the Ranked System to find opponents with similar ratings. It will assemble teams of equal strength based on their Rating Points, Division, and Rank. As a result, players will clash in intense battles, fighting on an equal playing field to see who comes out on top.

The number of Rating Points a player receives or loses after a match will depend on the battle outcome and their performance. The system looks at each individual player's performance based on Prestige Points earned and compares it to the team's average performance. Prestige Points are earned for positive combat actions.

For victories in battle:

For defeats or draws:

Players are guaranteed to lose a significant number of Rating Points for desertion or inactivity in battle, no matter the battle outcome.

There are three different ways to enter a match in Onslaught.

Super Platoons consist of 7 commanders and can enter an Onslaught battle as a complete team.

The difference in Rating Points for a two-player Platoon cannot exceed 350 points.

In a seven-player Super Platoon, the difference between the highest- and lowest-rated players cannot exceed 500 points.

Players can choose the same vehicles as their teammates, and there are no restrictions regarding vehicle classes.

In Onslaught, players will be able to communicate with teammates and coordinate tactics via voice chat. 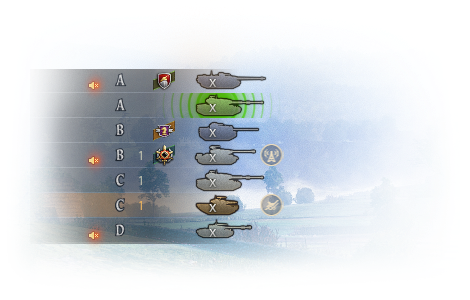 This feature is disabled by default, but players can enter the voice chat using the "H" key (default) or directly through the mode interface by clicking “Activate Voice Chat.” Players with voice chat enabled are marked with a special speaker icon.

The game mode has a total of seven Ranks:

The five main Ranks (Debutant to Gold) each consist of four Divisions (A, B, C, and D). All players start in Division D of the Debutant Rank. As you collect points, you will gradually progress to Division A of the Gold Rank.

Fifty (50) Rating Points are required to advance from one Division to the next, totaling 1,000 Rating Points. Points are earned for victories and lost for defeats, draws, and desertions.

The Champion and Legend Ranks are not divided into Divisions A–D, and there is no fixed number of Rating Points needed to progress from one Rank to another. Instead, the top 10% of players that reach the Champion Rank will automatically advance to the Legend Rank.

Player activity in the Champion and Legend Ranks is tracked on a dynamic Onslaught Leaderboard in the game client.

Players in the Silver Rank or higher will lose Rating Points for prolonged inactivity. When a player is placed in one of these four Ranks, each battle will reward them with a certain number of Activity Charges. These charges are rewarded for any outcome in battle, but will not be given to players who are inactive or leave a battle early.

A player with a fully charged Activity Bar has 14 days to resume playing before losing a portion of their Rating Points. Inactivity for a prolonged period of time will result in a demotion to the Bronze A Division.

This Rank Inactivity System allows players to take a break but ensures that the mode stays competitive until the end. Players have to participate continuously in order to hold on to the highest Ranks and earn the best rewards.

In Onslaught mode, get ready for two reward lines featuring unique customizations for Rank progression and mountains of in-game rewards for victories.

The Debutant camouflage pattern for the "Wing and Claw" style

The "Wing and Claw" 2D style

The Iron camouflage pattern for the "Wing and Claw" style

The Bronze camouflage pattern for the "Wing and Claw" style

The Silver camouflage pattern for the "Wing and Claw" style

The Gold camouflage pattern for the "Wing and Claw" style

The Champion camouflage pattern for the "Wing and Claw" style

25 bonds per day for holding a Leaderboard position

The Legend camouflage pattern for the "Wing and Claw" style

Legend of the Griffin nickname stripe

50 bonds per day for holding a Leaderboard position

The first line of rewards revolves around a brand-new progressive 2D style, featuring accompanying emblems, inscriptions, and Dog Tag customizations. The prizes are awarded based on a player’s progress through the different Ranks and certain achievements in battle.

The most significant reward is the new “Wing and Claw” style, the first progressive 2D style to evolve with every new Rank reached. It can only be applied to Tier X vehicles and consists of a camouflage pattern, inscriptions, and emblems.

Players will receive the style after playing their first battle in the new mode, and can earn four additional copies for reaching the Bronze, Gold, Champion, and Legend Ranks.

The camouflage pattern evolves the first time a player reaches each new Rank.

Three variations of five emblems and nine unique inscriptions can be obtained by meeting certain conditions in Onslaught mode, such as winning 15 times as part of a Super Platoon or causing 25,000 HP of damage. These special customization elements can only be applied to the Onslaught 2D style.

1 "Exhibition Performance 3" emblem
Into the Cap Circle
Conditions:
Earn a total of 250/500/750 base capture/defense points in Onslaught
Reward:

1 "Into the Cap Circle 3" emblem
Tactical Advantage
Conditions:
Capture a total of 15/150/375 Points of Interest as a team in Onslaught (including captures by both the player and their teammates)
Reward:

1 "Till We Meet Again 3" emblem
Shoulder to Shoulder
Conditions:
Win 25 battles in a 2-player Platoon in Onslaught
Reward:

1 "Seek and Destroy" inscription
Prestige
Conditions:
Be the top player on your team by Prestige Points earned in Onslaught 50 times
Reward:

After playing your first battle in Onslaught, you will be awarded three rental vehicles for the mode:

All rental vehicles are replicas of existing tanks with the same characteristics and properties. They will remain on your account until the end of the Season, on November 20 at 19:00 PT | 21:00 CT | 22:00 ET, and will be removed when it’s over.

Players will unlock a unique Dog Tag Background upon reaching each new Rank from Iron and above. At the Iron Rank, you will also recieve an Engraving for Prestige Points earned and at the Silver Rank, you will get an additional Engraving for victories in the Season of the Griffin.

The best and most ambitious players who reach the Prestige Ranks will receive a cool Griffin mastery badge and the striking Legend of the Griffin stripe, as well as a daily reward of 25 bonds for the Champion Rank and 50 bonds for the Legend Rank.

The second reward line includes bonds, credits, pieces of equipment, Personal Reserves, consumables, and more. Players will progress through 8 stages based on their number of victories in Onslaught mode. To complete each stage and grab the prizes, players need to win a certain number of battles.

You can earn Battle Pass Points when playing Onslaught.

Leaving a battle early or not participating in the action can cause significant disadvantages for your team. Therefore, disciplinary actions and penalties are in place to discourage undesired behavior and sanction players who negatively impact battles.

The following actions will be penalized with temporary blocks and significant deductions to Rating Points:

You will lose significantly more Rating Points for desertion and inactivity in battle than for a lost match. Repeat offenses will increase the duration of a player's ban from the game mode.

This concludes our deep dive into the new competitive game mode. Check out Part One to learn more about the mode’s game mechanics, participate in the Common Test to get a sneak peek, and make sure to provide feedback.

Get ready to climb through the Ranks and earn epic rewards as soon as Onslaught hits the live server on October 12!