1.3. During the first day of the event, all provinces will be available for landing. After Prime Times end, the provinces will switch to the standard event mode, according to 1.2. In the event of a draw in a battle for a landing province, it is considered a defeat for the challengers.

1.4. During Operation Typhoon, the Global Map will feature South and Southeast Asia, and a new Front:

The Front will work the same as previous events.

2.1. During "Operation Typhoon", Clans compete for provinces, earning Fame Points both for defending their own territories and for capturing new ones.

2.2. Clans can capture provinces by:

2.3. Landing provinces will randomly change on the map after each Prime Time. If a Clan already owns a province on the Global Map, they can apply for landing tournaments.

2.7. Distribution of Fame Points after a Clan captures a province from its previous owner: 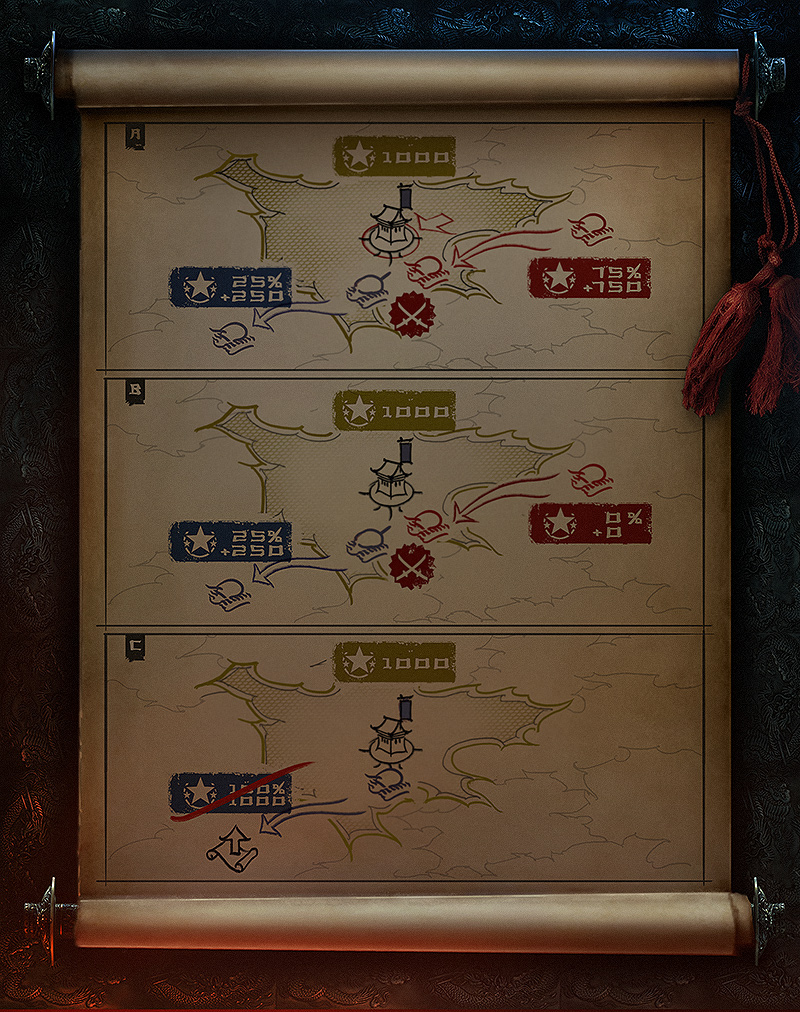 2.8. If a Clan captures an unoccupied province, 75% of the Fame Points accumulated in this province are added to the Clan’s rating. However, 25% of those accumulated Fame Points vanish, since there is no previous owner.

2.9. After leaving the Global Map, Clans don't receive any Fame Points for holding provinces. Fame Points accumulated their provinces are instead deducted from the Clan’s rating. However, the accumulated Fame Points stay in the provinces and will be distributed among their future owners.

Clan Fame Points are recorded and displayed in the Alley of Fame, as well as in Clans’ profiles on the Clan Portal (the Global Map section), where Clans can track their event progress.

3.1. During the Operation Typhoon event, personal Fame Points will be calculated according to the following formula:

Team_XP: Amount of Experience a team earns in battle

Battle_XP: Common amount of Experience both teams earn in battle

3.2. A Clan also gets the same amount of Fame Points for each battle as a member of the Clan who participated in the battle. For example, players of Clan A got 47 personal Fame Points after a battle. Thus, Clan A also gets 47 Clan Fame Points.

In disputes of crediting Fame Points (e.g., suspected "false" battles, etc.), administrators reserve the right to request a battle replay, screenshots and other information relating to the situation. If the requested information is not provided, the administration reserves the right to impose sanctions on potential offenders. We strongly recommend that you enable "record battles" in your game settings.

"Operation Typhoon's" grand prize is 2,000 tier VIII Chieftain/T95 vehicles, and will be awarded as follows.

4.1.1. According to the event results, top 2,000 players that score the highest in the Alley of Fame will be awarded with the prize vehicles, distributed according to the players’ personal standings.

4.1.3. If a player scored the same number of Fame Points as the lowest-ranking tank winner, the player will also receive a prize vehicle.

4.2.1. Top Clans will be awarded with Industrial Resources, added to the Command Center of the Clans’ Strongholds.

4.2.3. Industrial Resources will be awarded based on Clans’ ratings.

Take a look below to see an example of how Industrial Resource will be distributed..

4.2.4. A Clan that scored the same number of Fame Points as the lowest-ranking prize-winning Clan will receive the same amount of Industrial Resources.

4.2.5. If a Clan does not have a Stronghold created by the end of the event, the Industrial Resources will not be awarded.