Are you an anime lover looking for some cool friends to blast tanks with while talking gaming and Akihabara? Then SHOJO is just the Clan you're looking for! This laid-back group is dedicated to Clan Wars, Skirmishes, and Strongholds, but they’re as much about community as it is about competition.

Wargaming sat down with a few of SHOJO’s members to learn the story behind their Clan.

Shigure_Desu (Lewd) - Commander, clan maintenance, runs teamspeak, diplomat, impulsive, a ship girl on all levels except physical, resident poi-er.
Yuudachi_Desu (Systems) - The commander's right hand man, main caller of every important battle, the protagonist.
Yukekaze - Part of the the clan's old guard, gives moral support and grinds SH's and boxes like no other. Also lives the life of a meme, worships shrek, and resides in cardboard boxes.
Kaga_Kai (Haruhi) - Executive Officer. Main roles are to call stronghold battles when possible, and call flanks/focus fire. Plays funky music to get everybody into a good mood.
Kawaii_Anime_Girl (Arma) - MAHOU SHOJO community manager/support and makes sure SHOJO doesn't get bullied by MAHOU. <3s A N I M E and cute clans (like SHOJO) and cute people (like Tama).
Georgietheprincess - Chief in charge of yelling at people during battles, helps with recruitment, gives people that dank gold.
Brojohnwayne - Nice guy, non-anime player, helps with recruitment, helps manage gold pay outs and whatever else is needed.
Kururu_Desu - The token Chinese guy who speaks in metaphors, leader. He comes up with strats and calls, also manages stronghold activity.
Tamagakure - Retired Shojo head recruiter. Really enjoys being the face of a party, except when speaking in public. Also the nephew of Shojo's Main Protagonist, learned all of the tools of the trade from his dear uncle.

What's the origin behind SHOJO?

Shigure - Way back, about a year and some change, the original commander of MAHOU (Sayaka_Maizono) asked if we wanted to be a sister Clan. We had a completely different name and goal back then, but we needed members, so we said, "Yeah," and it’s slowly started to grow from there.

Kawaii - At MAHOU, we were looking for a Clan to be our sister Clan. We realized you can't be MAHOU without having a SHOJO [“Mahou” means “witchcraft” or “sorcery" in Japanese; “shoujo” means “young woman” or “girl.”]. It just doesn't work. We saw that Shigure had just made a recruitment thread for his Clan, and we noticed it right away, because back then, there weren't a lot of anime Clans that were alive or active or anything of the sort, so seeing one on the recruitment forum really caught our eye. Then we started talking to Shigure, and he ended up being a really chill dude.

Did any of you guys know each other beforehand, or did you meet in-game?

Armaxanga_desu (Tamagakure) - One of the things that eventually got me into the Clan is that Shigure and I used to chat from time to time on Steam and on the WoT forums. For a little while, SHOJO started out as something called United SWAT, and it was more of a little hangout Clan that didn't have big ambitions. From time to time, Shigure would ask me, "Come join United SWAT. You're a pretty good player. We can use you." But at the time, the Clan wasn't really anime, so I was like, "Meh." Eventually, the Clan became SHOJO, and due to the urging of Shigure and some other friends, I joined. After that, I started undertaking the recruitment process. At first, I'd browse the "Looking for a Clan" thread constantly, and then I brought in a few other friends I had from a former, now-dead Clan, and that's how SHOJO got its start.

Yukekaze - I remember the first days when I got in. The Clan was a small community of players. It wasn't such a big Clan.

Shigure - Initially, our goal was to be a Strongholds-oriented Clan. We weren't really that interested in Clan Wars, and we wanted to work our way up to being equals with MAHOU. But after a little while, our ambitions grew quite a bit.

What makes an anime Clan unique? Is there more to it than a shared love of the medium?

Armaxanga_desu - A large majority of us share a love for Japanese animation. Plus, we have the cutest icons that you'll see in World of Tanks.

Yukekaze - Not all of us enjoy anime. When SHOJO started to gain a reputation and became a big Clan, some people who didn't like anime started to join.

Kawaii - For the most part, we do bring in people who have a love for anime. Yeah, we have a few people who don't really watch it, but at the same time, these are people who are at least open to it. Overall, one of our main focuses has always been to maintain a good community with good people, and as a result, we've always tried to keep our standards pretty high and just continue to raise the bar.

Shigure - One of the best examples I can think of is the anime Clan as a theme. You can say OTTER is a, what would you call it?

Shigure - Sure, a furry Clan, or there's a Clan centered on dads. It's all about the theme. It's basically about a group of people who all enjoy the same hobby and it expands from there.

GeorgiethePrincess - It's a nice unifying feature that ties the community together. It's something that, at the end of the day, we can all sit around and talk about.

Any fun traditions when playing Tanks?

Shigure - During Clan League, we would get asked if we could stream our comms, but we always said no because our comms are always a bit of a fuster cluck. It's a good time. It's a fun time. If something important needs to be said, Systems is generally able to get it out, but we're a special group. (Laughs)

Shigure - It's a joke that the average age of SHOJO is 12.

How many people are in the Clan right now?

Armaxanga_desu - We have 97 people in the Clan. It was a struggle to get to the first 50, but after you get past 50 or 60, more people want to join. Until then, it was pretty painstaking.

GeorgiethePrincess - Below 50, people are really hesitant to join a Clan at that stage. I think it's like that for every Clan.

Armaxanga_desu - One of the big things for us is that we cater to a specific group of people.

GeorgiethePrincess - Yeah, and I think that's a really great piece of advice for anybody looking to start their own Clan. Have something that differentiates you from someone else, even if it's like what PETCO does, where you're all just pet-themed names. That's not a huge thing, but it helps separate you from the pack. Otherwise, you're never going to get off the floor with recruitment. For SHOJO, that was anime, and that's what we built our community around. Having something to build your Clan's community around just makes recruiting so much easier.

Kawaii - We have almost 300 people in the MAHOU/SHOJO community thanks to anime, so it shows even small things can lead to big gains later on.

What's your favorite part of being in SHOJO?

Armaxanga_desu - My favorite part is interacting with all the people. Over the past year or so, it's been quite the experience. I'm not the most social person IRL, but in SHOJO, it has opened me up to be more of a social person. Just being able to meet all of these really great people is something I really cherish.

GeorgiethePrincess - I've enjoyed being in an anime Clan. I was a furry before, so being surrounded by anime is a nice change of pace.

Shigure - I really like the active competitiveness about us. We have a Steam group and we play a lot of games. We also do community nights where we just hang out.

Yukekaze - My favorite part of this Clan is the fact that it’s a community. I'm not a very good player, but when I'm having a bad day, I can just come and have a good time.

Kaga - I like to go with Yuki, who is from Germany and is just a blast to be around. We have people from Australia and Japan and the States, and everyone is just so fun to be around. We get to meet so many new people, that's what I like the most.

BroJohnWayne - The people. I couldn't think of any Clan that I'd want to be in besides SHOJO, and I've been here since January. I'm one of the non-anime people here.

GeorgethePrinces - His name is BroJohnWayne. Guess what he likes to watch.

BroJohnWayne - There was an instance when I was recruiting a guy and he comes in and he was like, "Wow, I was expecting something completely different. I thought there would be a bunch of Chinese people, but I got you."

What are the goals for SHOJO moving into 2016?

Shigure - What we're looking forward to right now is the Champions League. Really, it's all about competing with the other Clans that are out there right now. Our original goal was just to do Strongholds, then it became Clan Wars, and now it's Clan League, and we really just keep improving and improving from our players to our calling to just about everything.

GeorgiethePrincess -  It's just about getting better, for lack of a better way of saying it. As long as we're getting better, as long as we are showing some sign of improvement, we're happy. We want to be the best, but realistically, we really just want to be better than we were yesterday. 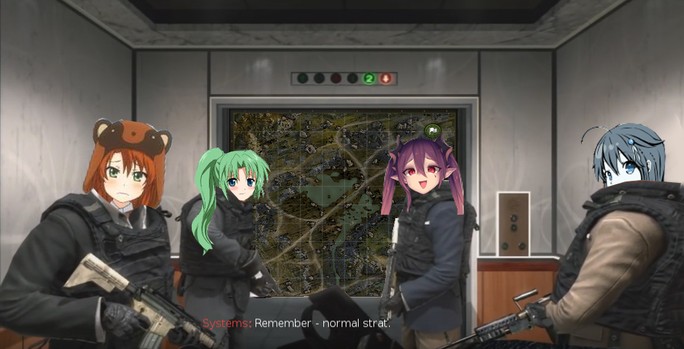 Check out SHOJO recruitment thread in the forums for your shot to join this anime Clan!

Battle against our Spotlight Skirmish team and you'll have the chance to win Gold prizes! If you’re streaming on your own Twitch.tv channel and you send a link to your stream with the time at which you faced us, your entire team will double their winnings! This link must be sent in a PM on the forums to veganzombiez by 09:00 PT (12:00 ET) by Friday morning (Dec. 11).

BIG NOTE: In order for us to verify that you were streaming on Twitch, we must be able to see the archived video. Please make sure you're archiving your broadcasts in your Twitch settings (preview).

If you have any questions you'd like to ask SHOJO on the stream, leave them in the comments thread of this article, or simply ask away during the Twitch chat.

Gold for this event will be distributed by December 16.