One really has to hand it to the Russians. When it comes to remembering WWII, they don’t go by half measures. Heck, they even give it a cool name. The Museum of the Great Patriotic War is a case in point, and makes the American National Museum of WWII look kindof anemic. 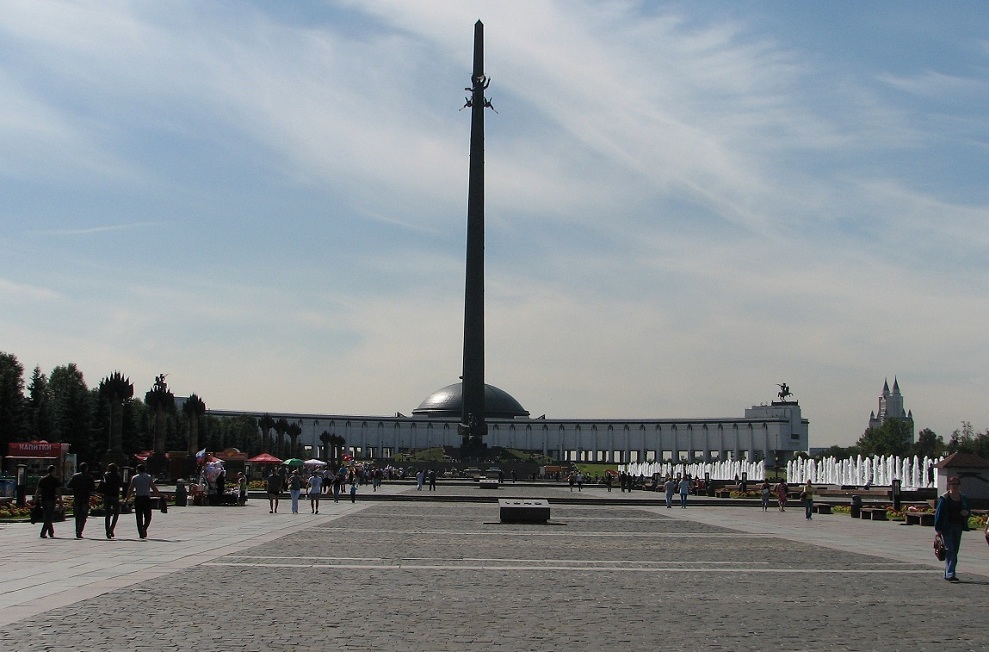 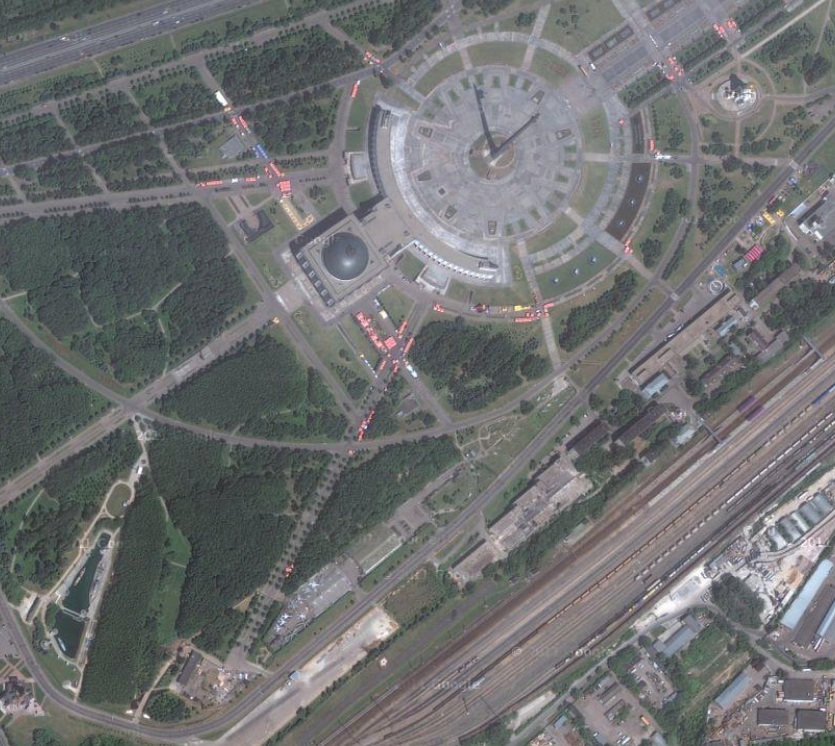 As with most anywhere else within the Moscow city limits, the best way of getting here is by the metro system. There is something to be said for a public transport system which tells you the time between trains in seconds, not minutes. (The ‘shotclock’ at the platform rarely went over 40 seconds) 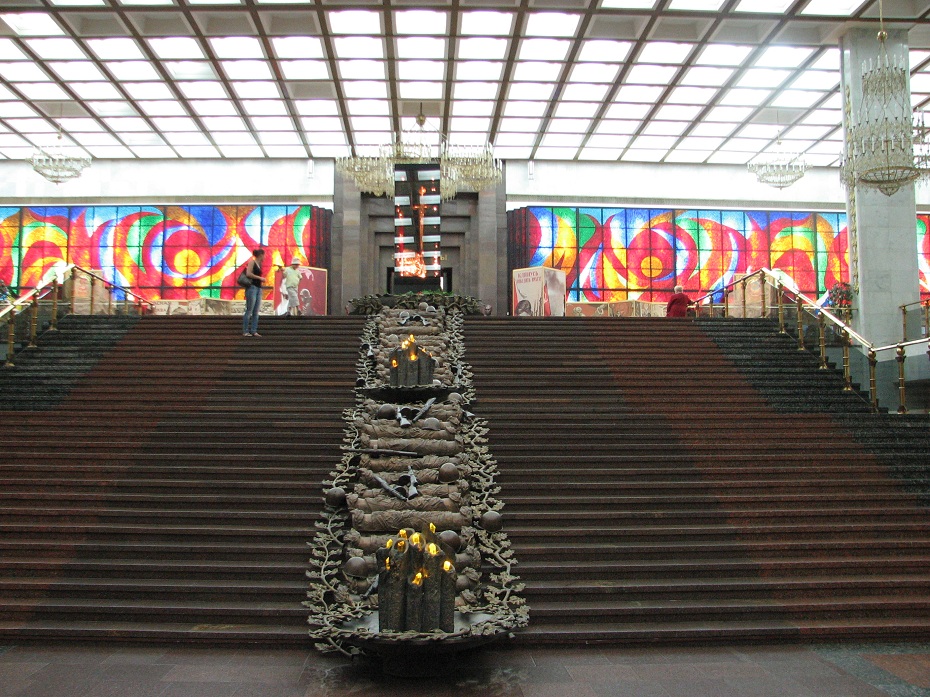 The museum is a new building, brightly lit, and comes with a rather impressive (but a bit garish and apparently quite unpopular) spire out front.  I am unsure what to make of the tiberium deposits on the central staircase inside, however. (Granted it could be kryptonite, but if you ever saw what tiberium does to a human body, you will forgive me for not examining too closely). If you start out downstairs, the prime focus is the Hall of Memory and Sorrow. 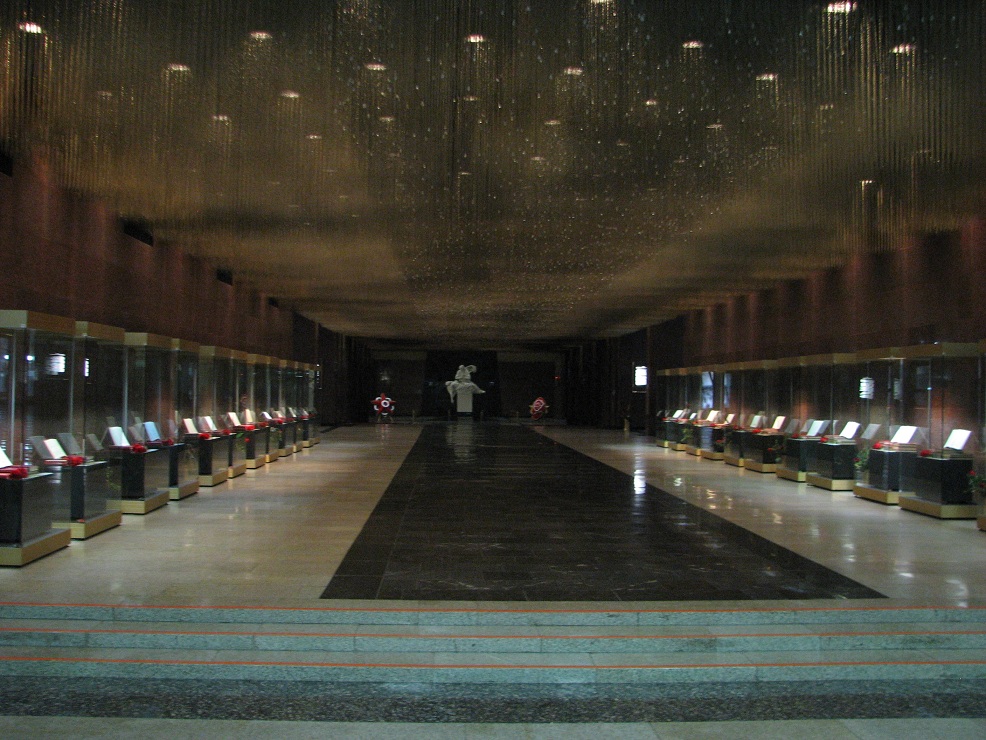 The books on in the cases contain the names of fallen servicemen. There are some 2,000 pendants and crystals hanging from the ceiling. Fortunately, the symbology of it all is on a sign right next to the entrance, and it’s in English. Indeed, this is one of the few musea in Moscow I went to which had most all the signs with an English translation available.

The hall also sets the mood a bit for the museum. It struck me not as much as a museum, as it was a monument. Not to say there weren’t good artifacts to look at, but it did seem to permeate as a tone.

Along the sides of the Hall are the Panoramas. This really does seem to be a particularly Russian trait, I saw them in a number of places. 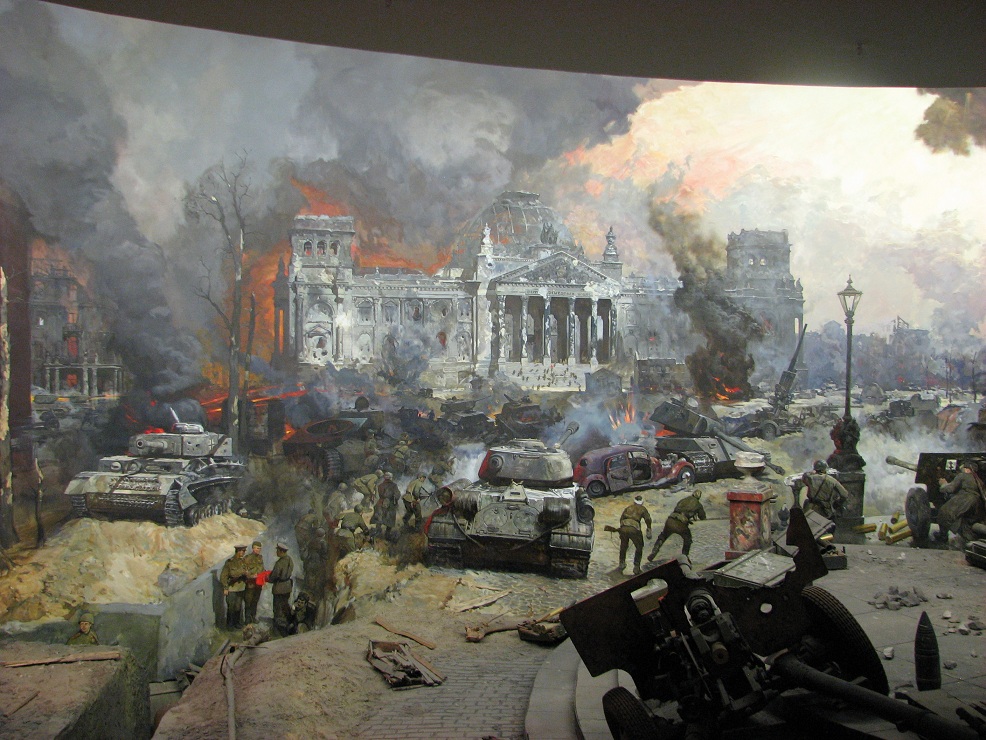 I think one would have to consider them more ‘interpretive’ than ‘representative’, but maybe I just haven’t quite gotten the point. I never spent more than two minutes in any one. 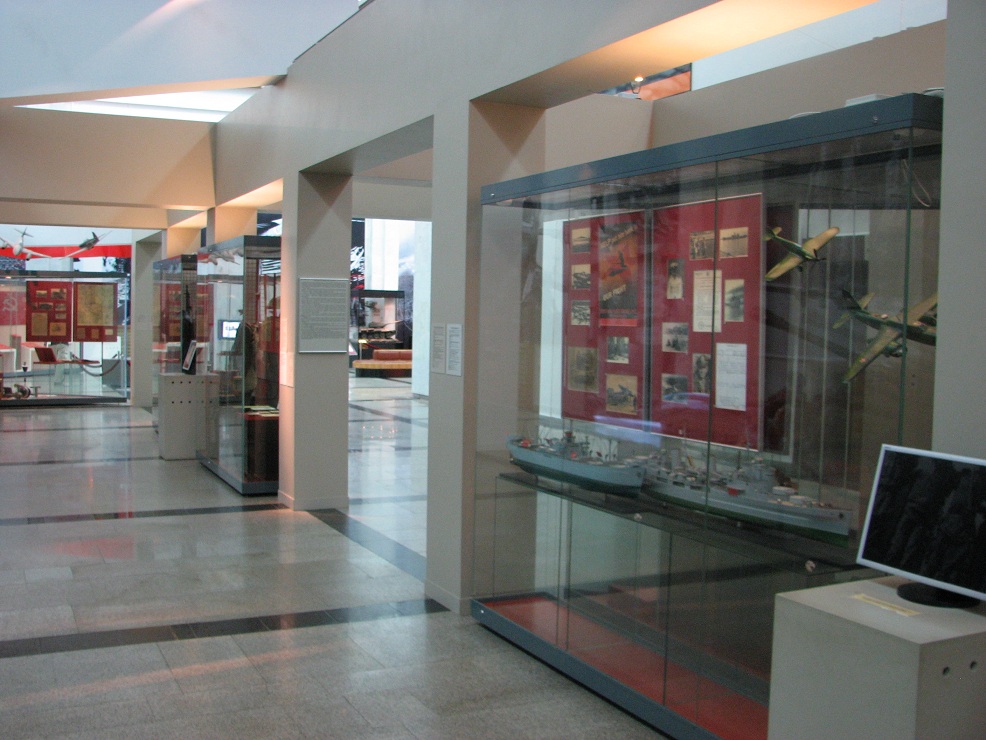 When you walk upstairs, that’s the exhibits and artifacts level. Again, the place is clean as a whistle, nice high ceilings and lots of room.  There are no artifacts bigger than an artillery pieces, but we’ll come back to that one. The bi-lingual signage continues, so I got quite an education, amongst other things, on the role of the Russian Orthodox Church in the war. 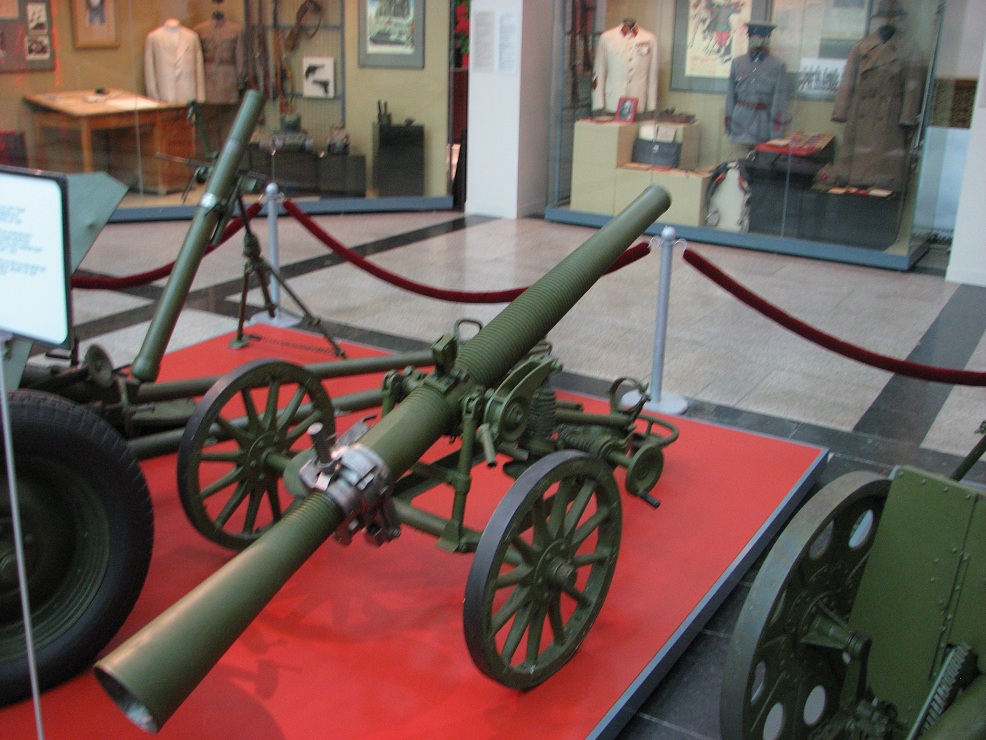 That gives an idea as to what’s inside. The fun stuff (from our point of view) is located outside, in Victory Park. Hope you brought walking shoes.

If you go back up to the satellite view, as you look South of the museum, you’ll see a bunch of aircraft. Head thataway, the entrance is at the North end of that field. 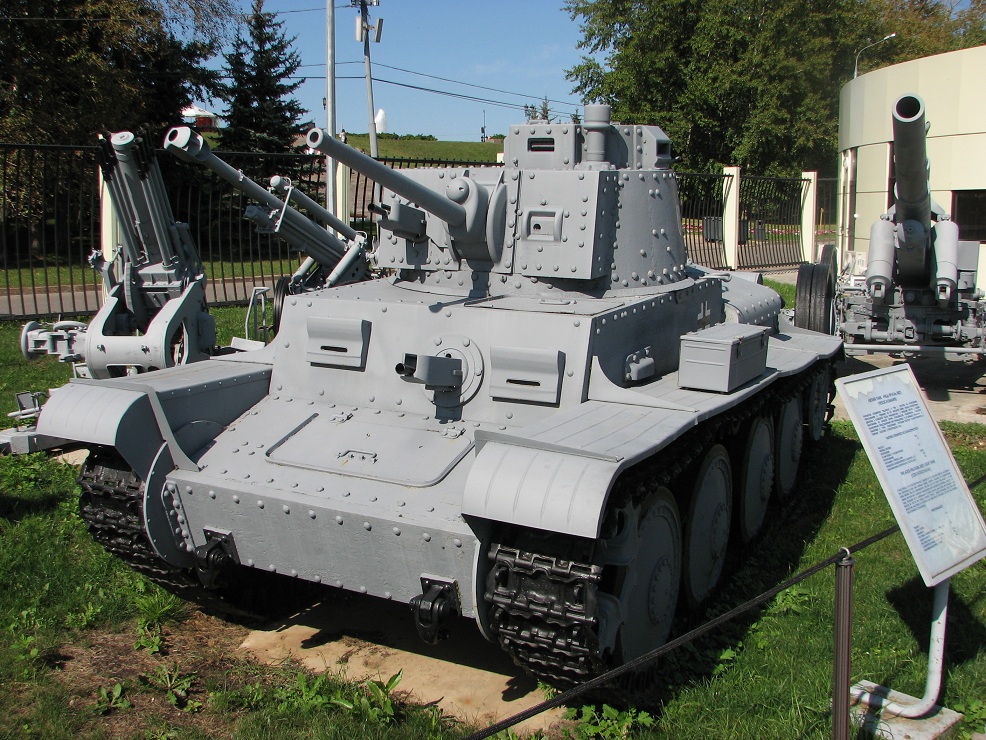 The multilingual theme continues here. The tanks are, externally, at least, in pretty good condition. I’m not sure how much of this is because the museum is relatively new, and how much is because it gets painted regularly, but I am mildly concerned about the state that they will turn into after being left outside for a number of Russian winters. Memories of Aberdeen Proving Grounds come to mind.

True enthusiasts will be able to see some pretty rare vehicles, such as this T-46 or an Su-76i. The ‘theme’ of the park is ‘The defence of Moscow’, hence vehicles are ‘dug in’, there’s a couple of trenches, and so on. And yes, the MS-1 really is that small. 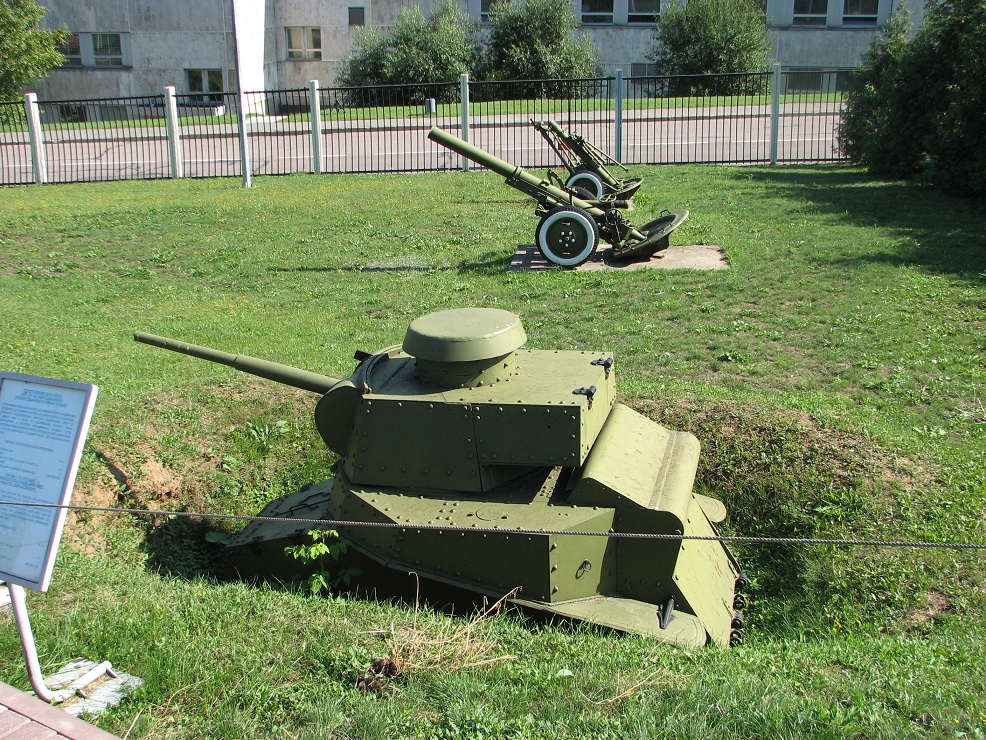 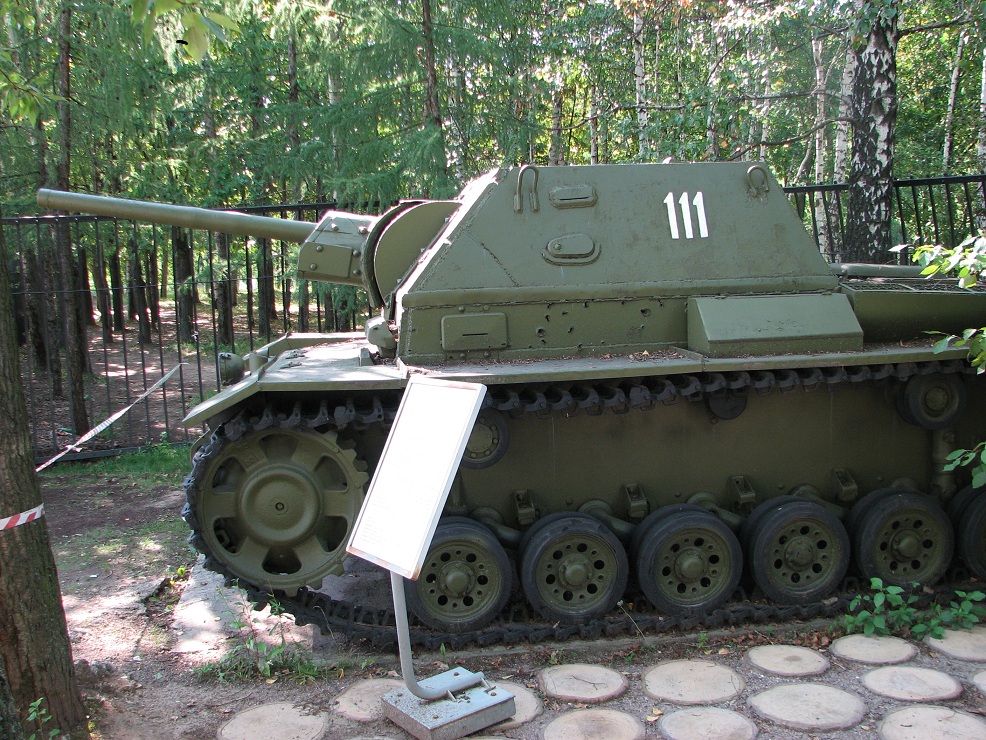 There is a comple lineup of vehicles, and it’s almost as if everything which the park could grab a hold of is represented to include lend-lease. If you thought the T-46 was rare (ten built), this is the only remaining T-26 mod 1931. 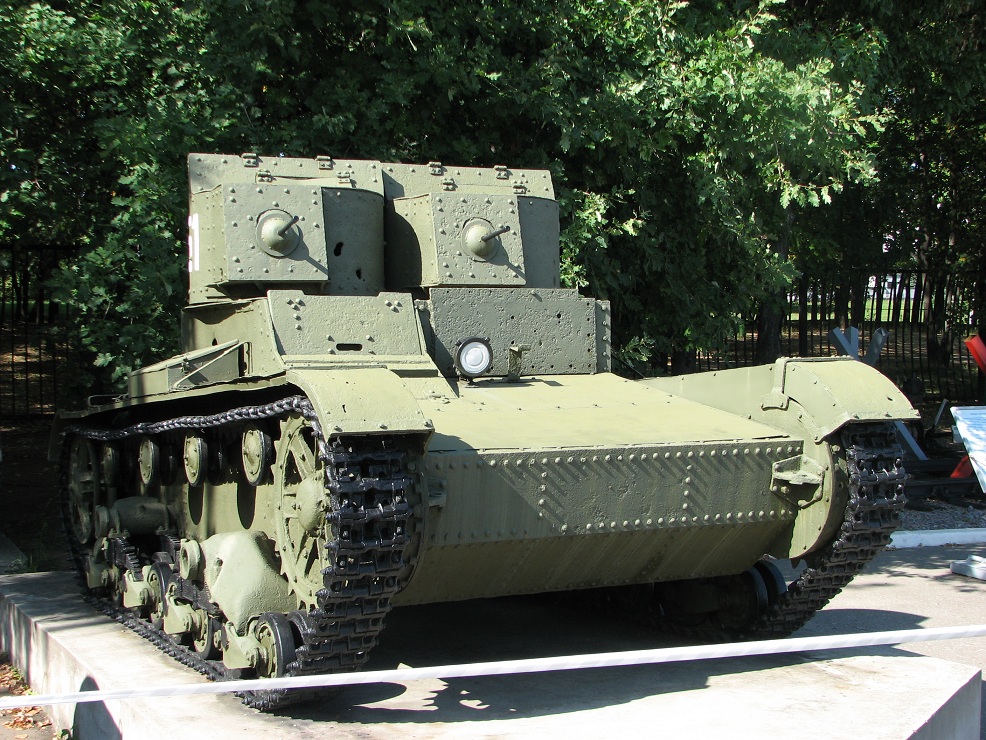 Unfortunately, some of the vehicles are positionined in a more familiar, unfriendly manner in which you are only permitted to see the fronts of the vehicle. 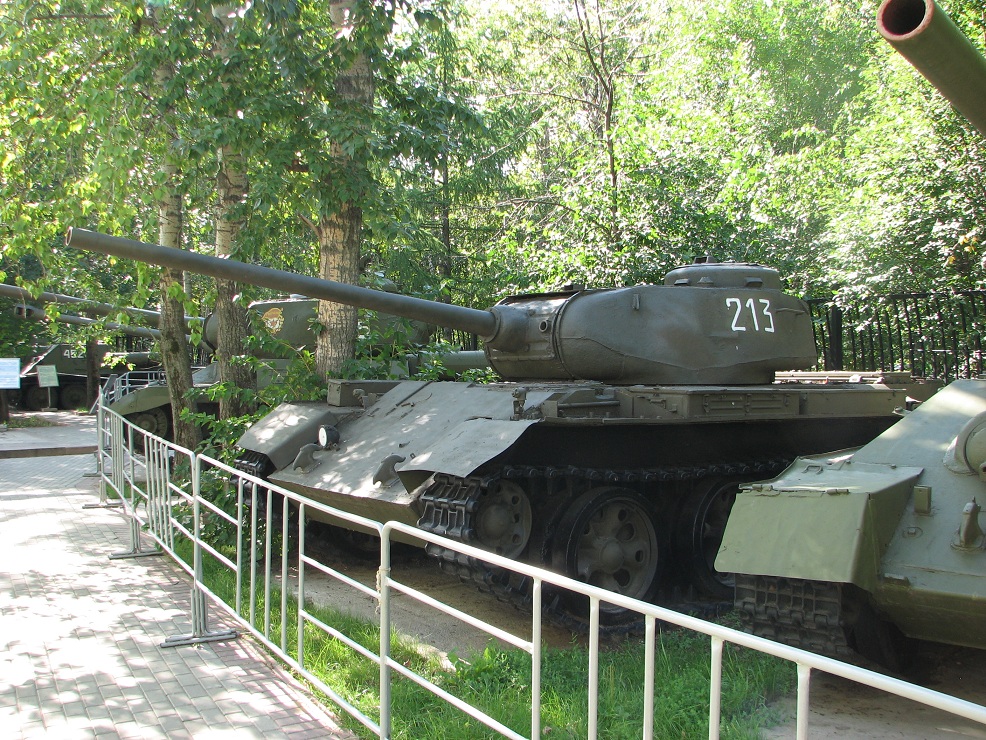 For those who are more inclined towards aviation, they have a nice selection of aircraft, from Messerschmitt to Lavochkin, Aircobra to Hurricane. 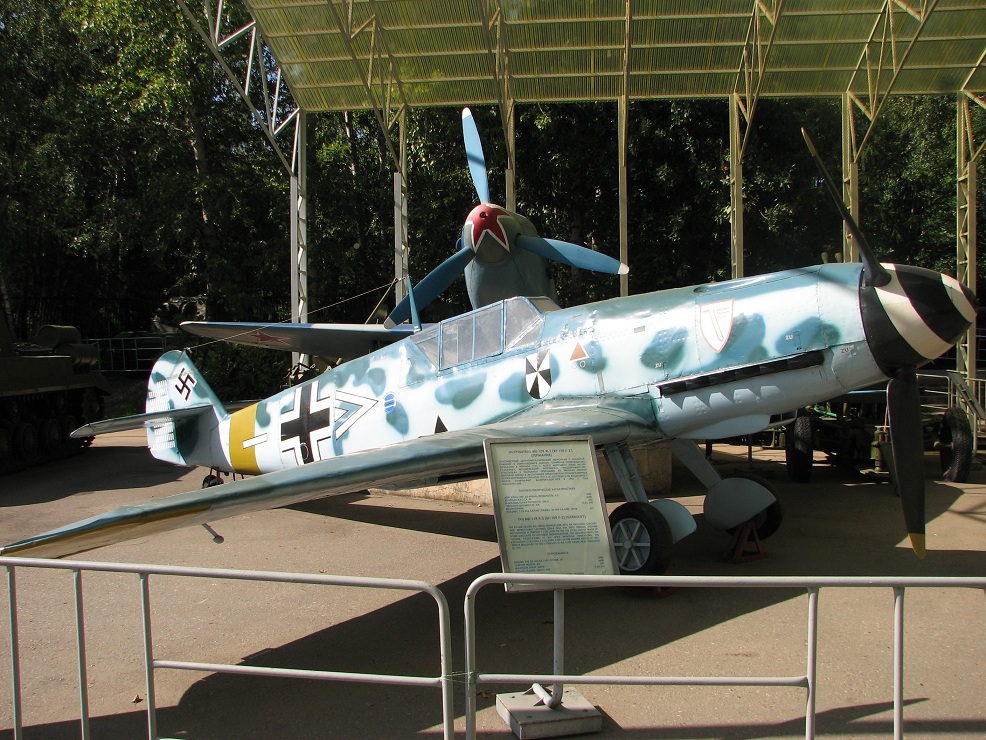 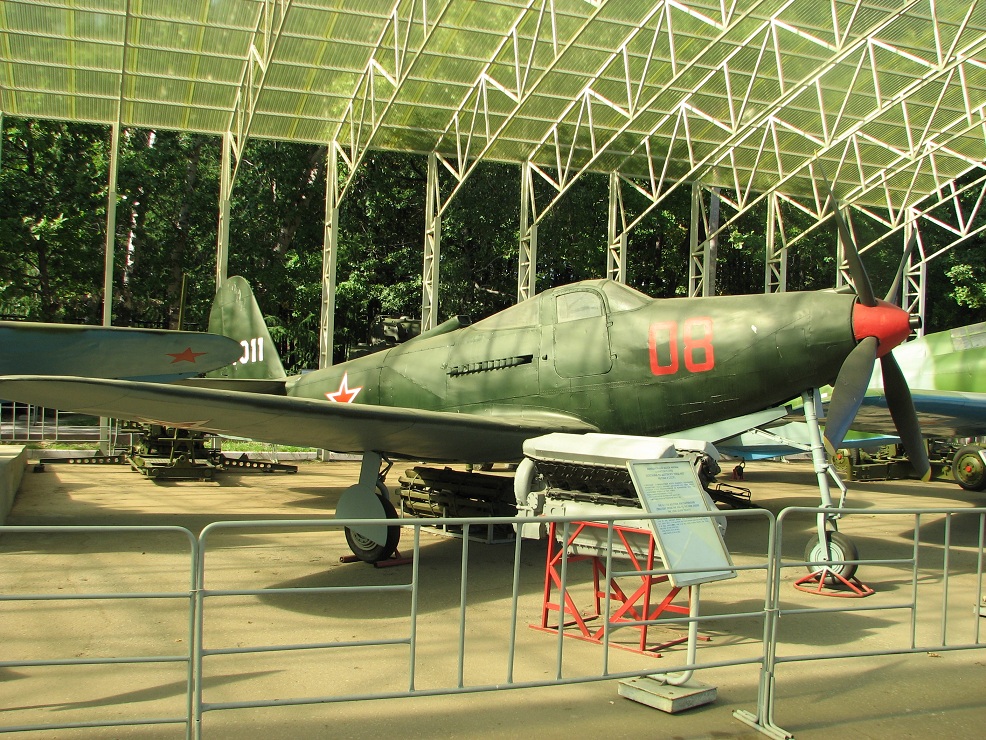 However, I’m not entirely sure that the presence of an exhibit necessarily means that the item in question saw service in the Great Patriotic War. 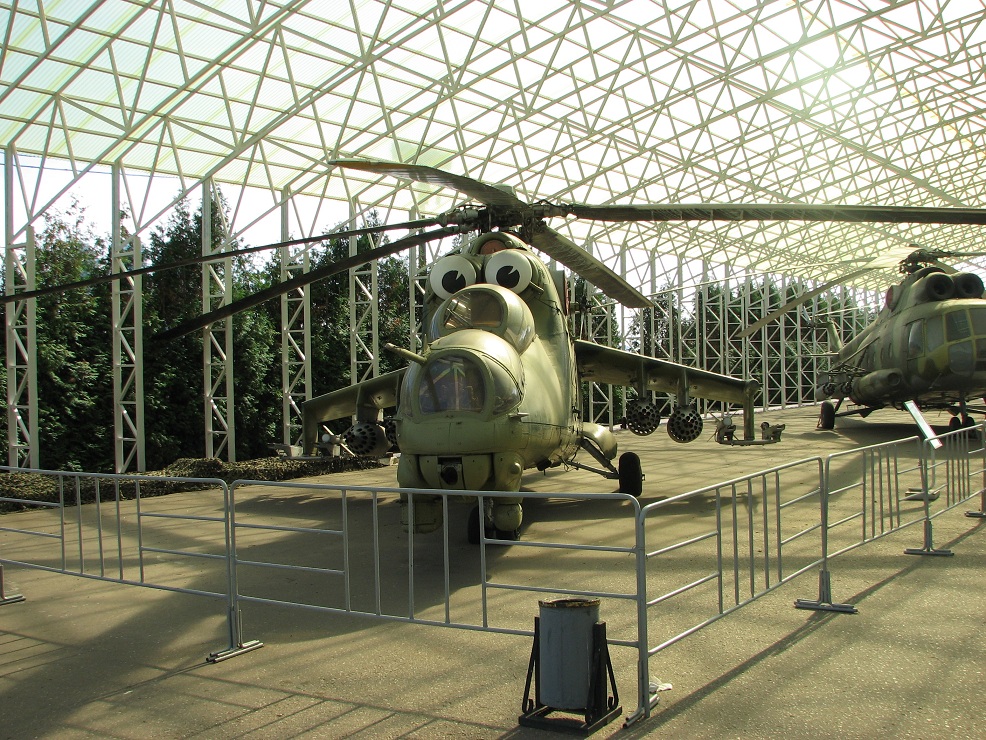 Either that, or the Germans really were hosed at Kursk.

Move further to the SW on the satellite shot, and you’ll see a lake. Yes, the Navy gets some representation at the museum as well. 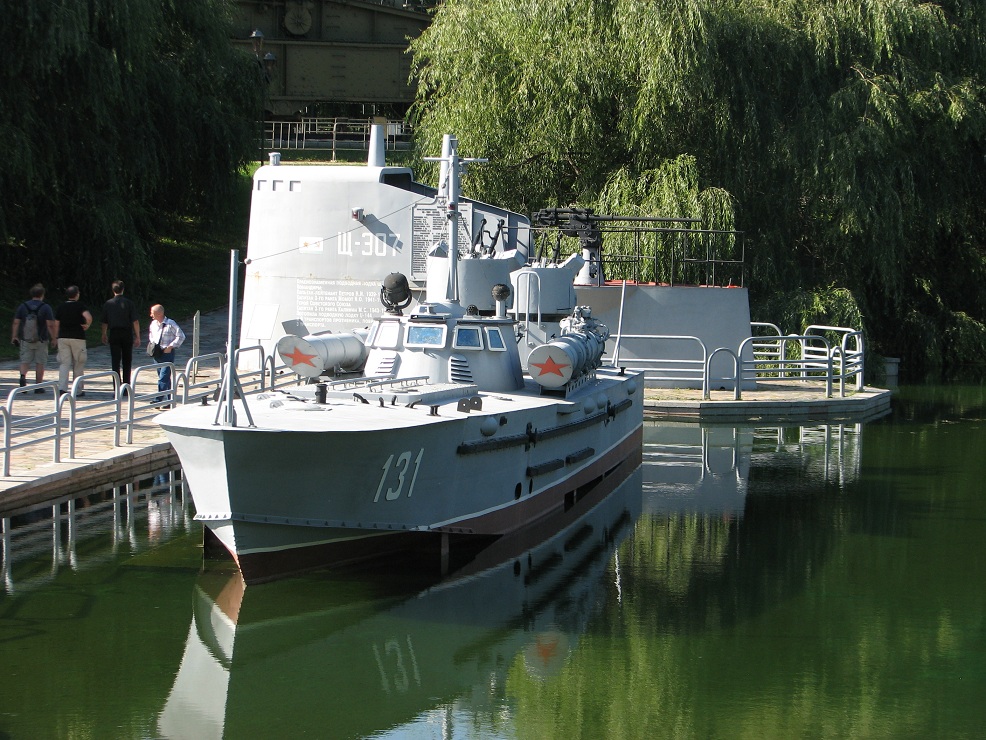 One of the more intruiguing displays is the concrete destroyer. Apparently the Russians managed to sail or tow a destroyer to Moscow, but once they got it there, they couldn’t quite figure out a reasonable way of getting it the last mile or two to the lake. Finally they decided to simply chop off the superstructure and turrets, and put them on a concrete hull. 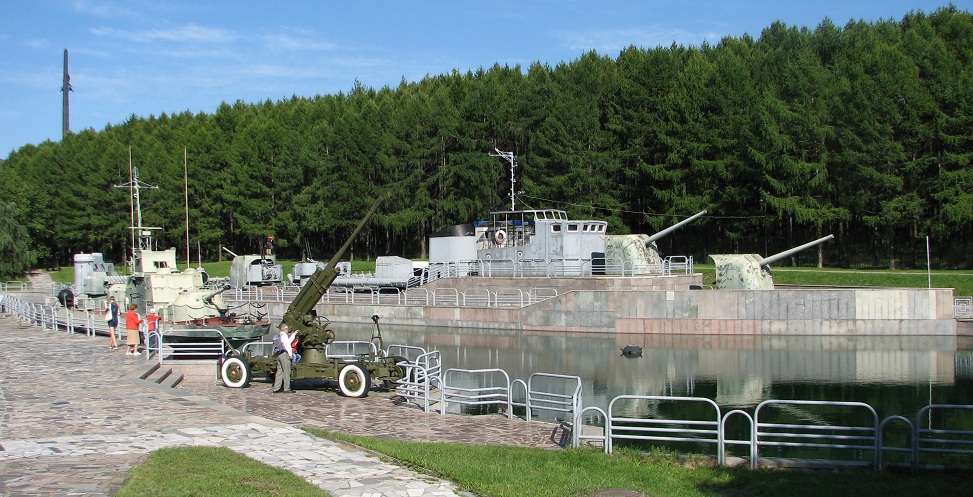 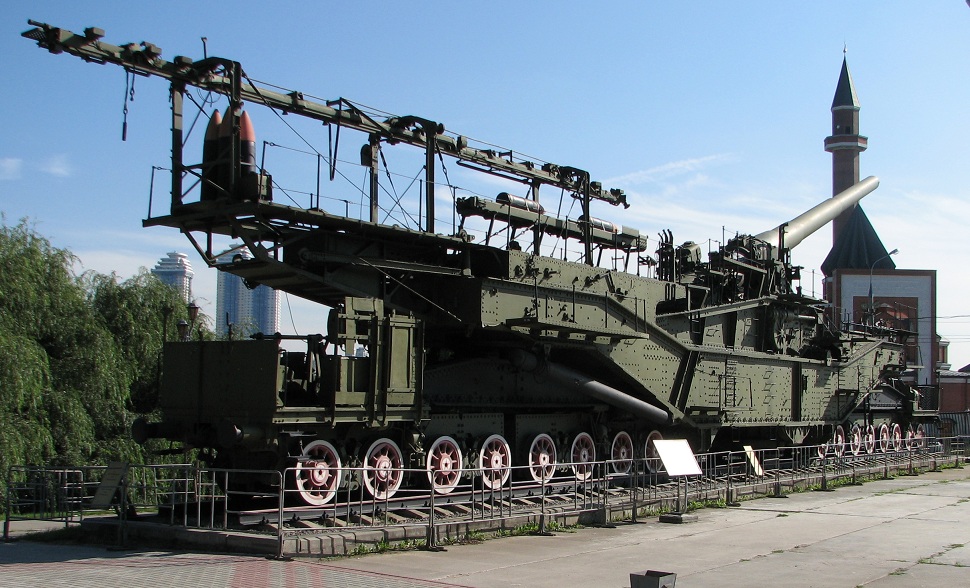 It wasn’t just the Germans that used railway guns. It’s a 305mm TM-3-12 if you’re curious. There’s a certain irony to this one being in Victory Park as they were captured by the Finns and used by them until the end of the war. Curiously, it was still in service in the 1990s. There are a couple of railway-related items in the park. 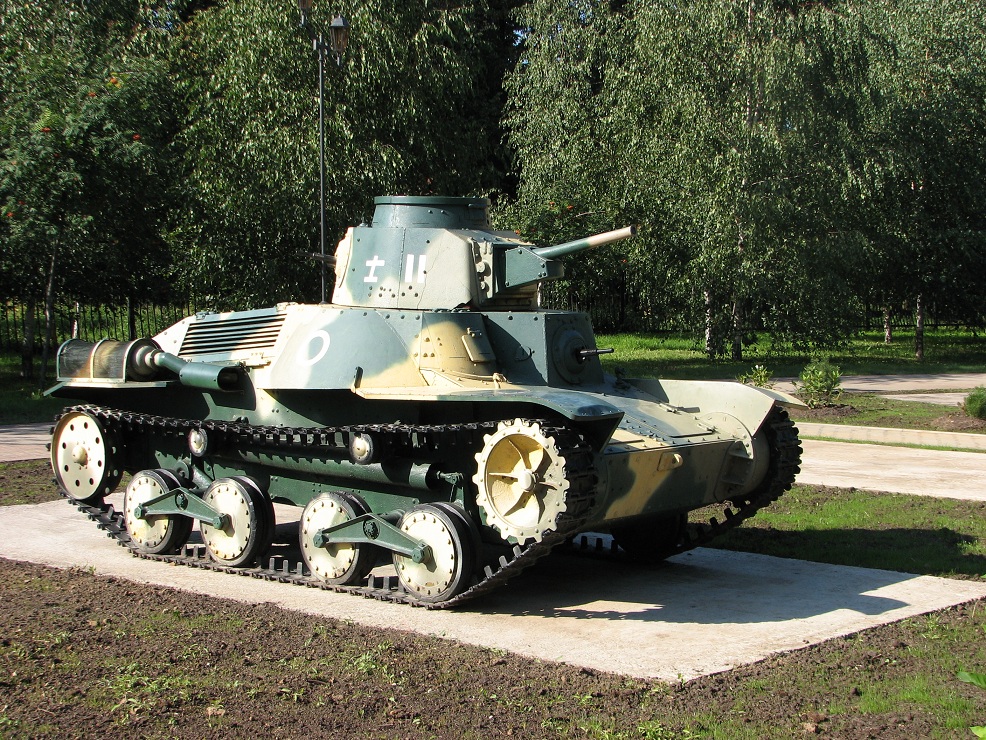 Continue back NorthEast and you find that they’re creating a little Japanese section. This Type-95 is only the first. A visit to the workshop area (by invitation, sorry) reveals two Type-97s being fixed up. 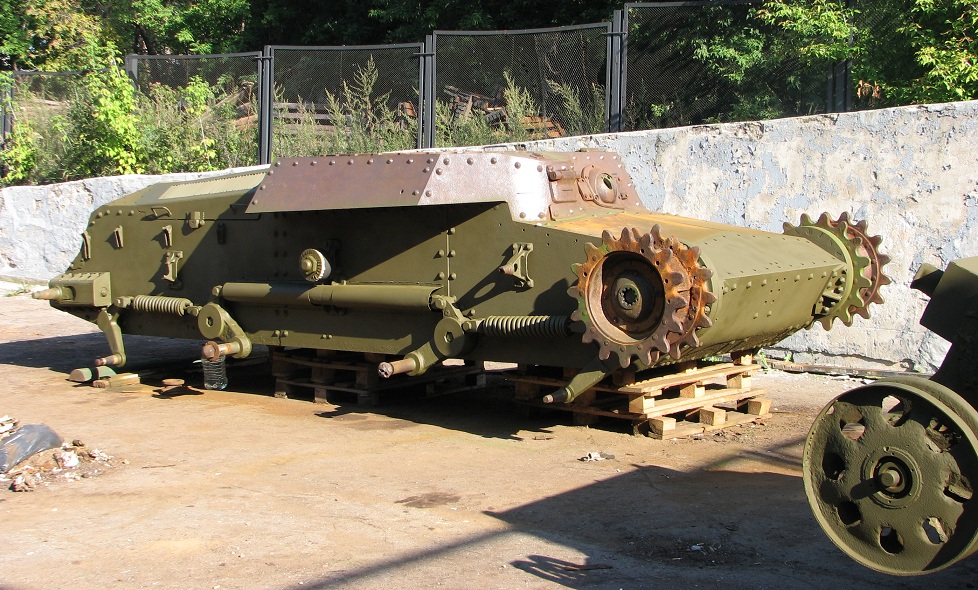 There’s a new exhibit opening up, effectively a museum of transportation. Wasn’t open to the public when I was there, but might be now. To get to it, wander back up to the entrance of Victory Park, cross the main road, and go into the basement of one of the buildings on the far side. 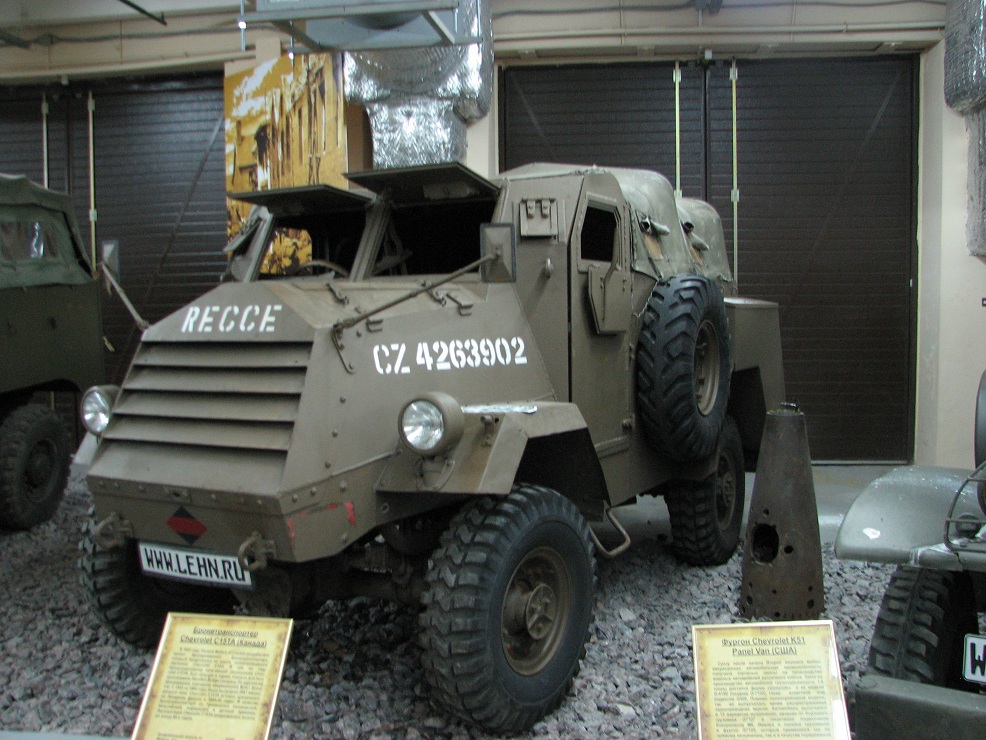 It’s a small little facility, has about twenty-five vehicles in it, to include one of Stalin’s limos. 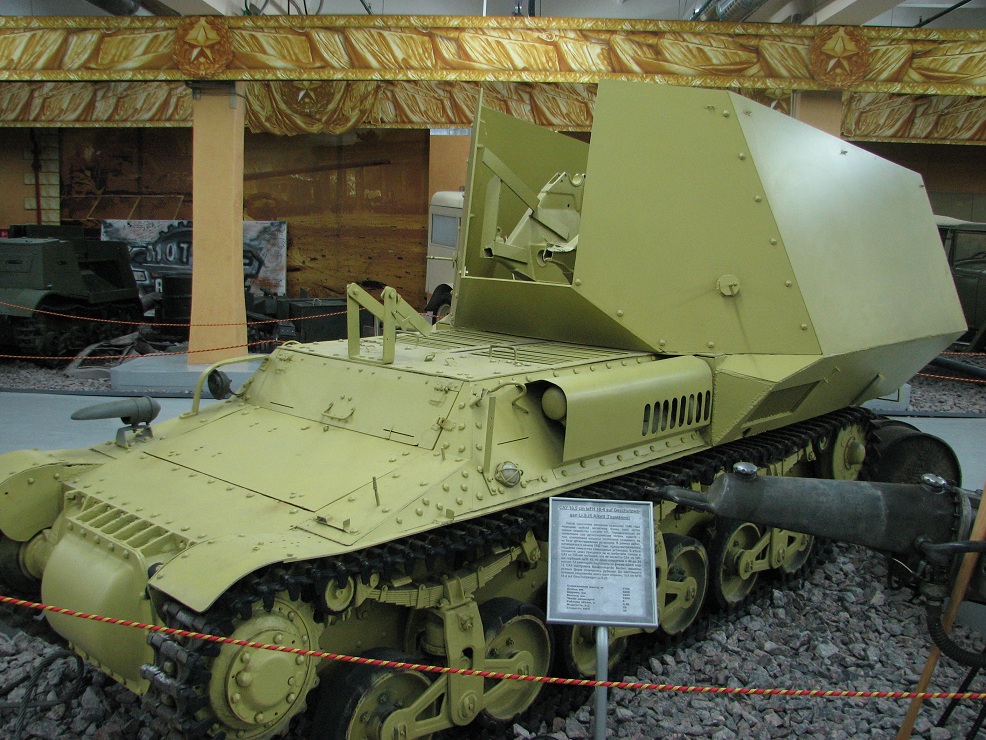 No, that’s not the limo. But they all are in pretty good condition

Anyway, you can spend far more time wandering aroud the place looking at exhibits than I had the time to. You really want to allocate most of a day, at least if you’re the sort of person who takes particular time looking over things which you know you will probably never get to see again. My one concern is that it’s really a summer trip. Granted, perhaps those if you in the Great White North of the continent might be a bit tougher than I, but all that gear sitting outside just strikes me as being more suited to visiting when not being viewed in sub-freezing temperatures.

Well worth a visit, and sets a good bar for other musea to meet.