For this Hatch, I'm handing the keyboard over to moonshadow5739. He runs the training program for tank crewmen at the Museum of the American GI and I asked him to put an article together on the process. 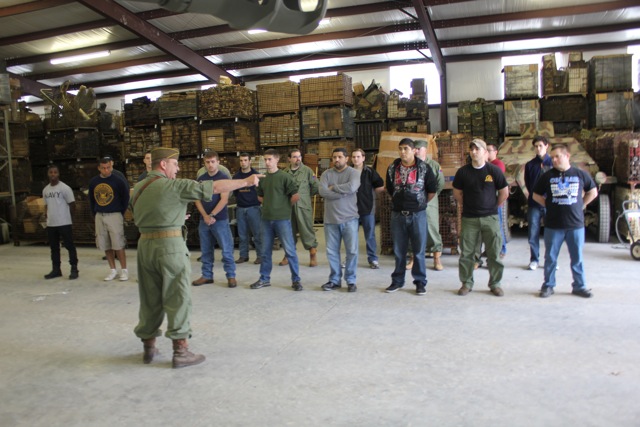 What does it take to train a World War II tanker? Being an ex-tanker myself, the principles are the same but vastly different technology.  When I first volunteered for the Adopt-a-Tank program four years ago, it was a collection of historians and tank buffs who came together to help a museum achieve the goal of showing the public what tanks looked like "in a combat situation," and in doing so, needed crew members to man all of the positions. I was asked to fill the position of Sr. Training Instructor to tap my knowledge of how an armored crew performs.

Training an active duty tanker in today's service takes an average of eight weeks, where training civilians for a museum artifact, training must be highly modified keeping in mind that these volunteers are manning the tanks for a couple of hours a year and so the training is a six day course concentrating on two to three subjects a day.

Safety is highly stressed in the training as these vehicles will still perform what they were designed to do 70 years ago: they will hurt and kill you.

The first thing that all volunteers must do is demonstrate that they are able to climb up and down the vehicles without any assistance. Second, and this is very important in the training, is that the volunteers must be able to enter and exit the M4A1 and M4A3 Sherman front bow hatches unhindered as these are the smallest of hatches in the entire collection measuring 12 inches by 17 inches.

This is done for safety reasons that in the case of an emergency egress, all personnel will be able to exit the vehicle in a very short manner of time that brings me to the next part of the training: emergency vehicle egress drill. All of the volunteers are put into the positions in the vehicles and on the command of "Vehicle Fire!" will exit the vehicle in under five seconds. This may seem extreme, but when you are dealing with the original 70 year old engines running on aviation grade gasoline as originally intended (US WWII tanks did not use diesel as a lot of people think), this part of the training is paramount and emergency egress drill is then performed at certain times throughout the training unannounced to the students to keep their awareness high. 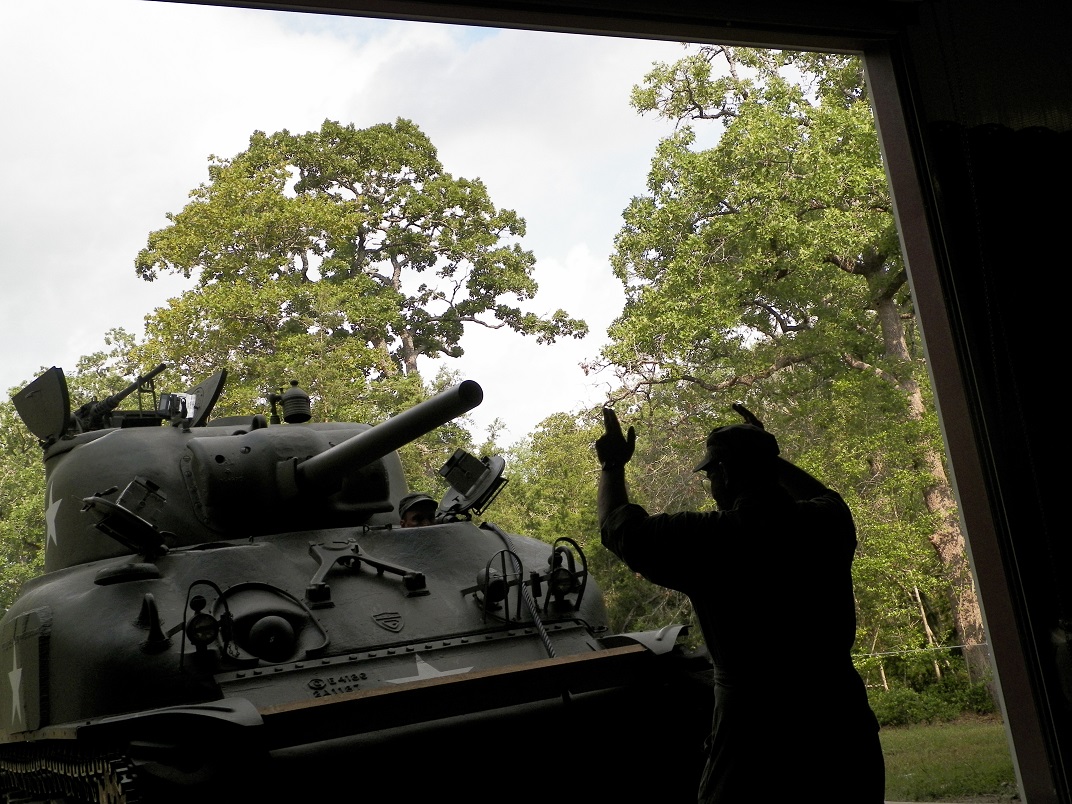 The next part of the training is ground guide hand signals. This is universal training for all tankers. Not only so that all tankers know what the hand signals are, but also to get those who are going to be the BOGs (Bow Gunners) used to giving said hand signals as they are to be the ones who will guide the vehicles in and out of the museum's building, around other vehicles and so forth. It is stressed that the ground guide has total control over the movement of the vehicle so it is very important that the ground guide and driver must work together as a team.

Next comes gunnery training. This is where the students are paired up into teams of "gunner / loader" and they mount the different vehicles in the museum's collection. Being a museum, the gun breeches in the vehicles are in an original state of being active, meaning they work. When performing the public demonstrations, blank rounds are prepared using the actual shell casings, so the students are instructed on the care of stowing and  handling of the rounds, and how to load the round into the breech of the gun. At this time the students are also taught the "Load" commands for this drill where the gunner takes a round and loads the gun. When the breech block slams shut, his reply will be "Round is up." This lets both the vehicle commander and the gunner know that the gun is loaded.

The student in the gunner's seat is instructed where the gun safety switches are and both the electrical and manual firing switches are, and when he is given the command to "Fire," he then flips the safety to the "off" position, reply's "On the way" and fires the weapon. When the gun has fired, the student is instructed to put the weapon back on "safe." Since these weapons are firing blanks, the gun does not give a complete recoil to eject the shell casing, so the gunner's next job is to use the manual eject handle on the breech to extract the shell and the loader is instructed to catch the falling shell casing. The student "loader / gunner" team will perform 10 "simulated" firings with empty casings and then they will switch positions and repeat the process. When they have completed this in one vehicle, the "team" will then proceed to the next vehicle where they will repeat the same procedure. With nine different WWII vehicles in the museum's collection, the students have a full days worth of weapon training. Now, for what everyone has been waiting for... the drivers training.

For this part of the training, two vehicles are used; the M5A1 Stuart and the M24 Chaffee. Both utilize a hydro-automatic transmission and both have twin Cadillac engines and are quite easy to drive. The vehicles are taken to the re-enactment field and are placed. After the students are given basic instructions on how steering levers are used and how it effects the movement of the vehicle, each student then mounts the driver's position and proceeds a "dry run" of starting the engines. At this time, a qualified instructor / vehicle commander then mounts his position. The start-up procedure goes like this:

Commander: "Prepare to start"
Driver: turns master switch on, opens master fuel lever, checks all gauges for power, calls out "Ready"
Commander: "Start (left/right) engine"
Driver: switches (left/right) power switch to "on" position, engages ignition button. After the first engine starts up, the procedure is then repeated for the other engine. Once the engines are allowed to warm up for a few moments, the driver is then given orders to "move out."

The trainee is then guided through a series of obstacles, left and right turns, halts and forwards lasting for 30 minutes. All students go through the drivers course. 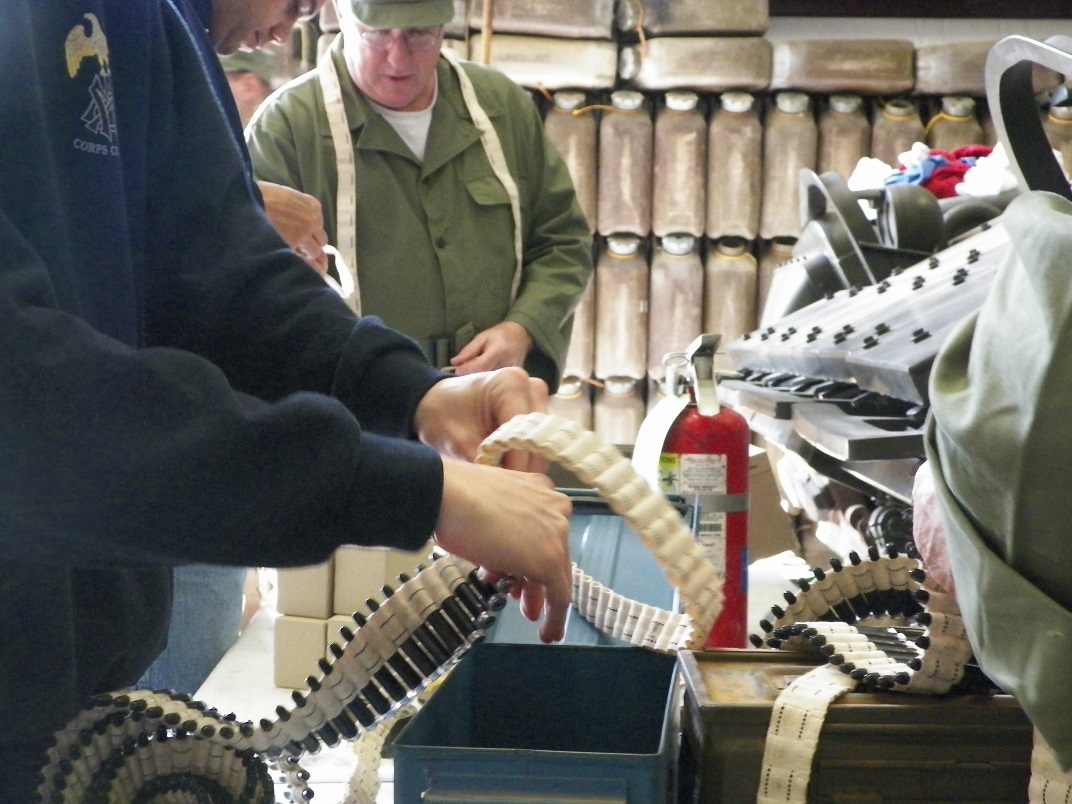 Next comes the Browning 1919A1 machine gun instruction. Each vehicle, with the exception of the M18 Hellcats and the M8 Greyhound armored car, have a bow machine gun mount and all vehicles have a mg co-axial mount. The students are instructed not only how to load and unload the weapons, but are also instructed on how to clear a jam and how to field-strip and clean the weapons.

All of the above mentioned training takes place over a five month period, taking place on one Saturday a month, starting in September, and the classes run for eight hours. On the next to last training drill date, the students are then put into "crews" and temporarily assigned to a vehicle with the Assistant Instructors as Tank Commanders.

Vehicle/Tank Commanders: Next to the driver, this is one of the most important positions on any of the vehicles, not just being able to tell the crews to fire, reload and mount up, but is the over-all eyes for the driver when the vehicle is moving and as stated above, safety is utmost and the driver and commander must work closely together as a team and it is the commander who has responsibility for the entire crew, so when assigning a person to this position, either an assistant instructor is posted, a veteran volunteer of the vehicles, or an ex-active tanker of the military forces who is in the program who has completed two years of volunteer training is posted to this position . 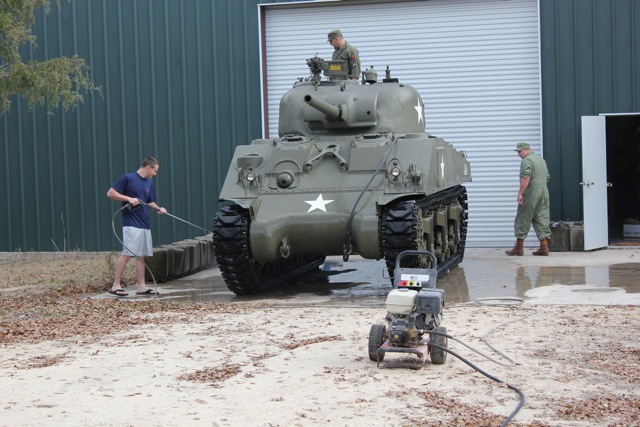 Not only do the volunteers who sign up for this program man the positions and operate the tanks, but they also clean the vehicles after each show battle and it takes an average of two hours per vehicle with the most time being spent on cleaning the barrel. On the last training date, a graduation is held where each new student receives a diploma indicating that they have completed the course and is promoted to a buck private or "slick sleeve." 2nd year tankers are promoted to the rank of Private First Class and are awarded their stripes, and 3rd year volunteers are promoted to Corporal and awarded their stripes.

Assistant Instructors wear the rank of Corporal-Technical Class, the Senior Assistant Instructor holds the rank of Sgt. and the Senior Training Instructor holds the rank of Master Sgt. When the students are awarded their diploma's and rank, they are then given their vehicle assignments; positions are based upon individual evaluations upon performance in each of the positions. Each returning volunteer is then rotated and cross-trained the following year so as to allow every person to have a chance to man each position on each vehicle.

The Museum of the American GI is the only museum in the country that allows individuals who are interested in history  the chance to partake in preserving and teaching history in this manner.