The Chieftain's Hatch: Tanks in the Marianas

Sixty-eight years ago today, the US and Japanese militaries were engaged in heavy fighting in the Marianas. To take a quick look at this, I again hand the keyboard over to Ken Estes.

Saipan  (15 June – 9 July 1944) Although Japanese infantry and artillery constituted their greatest strength, the army had its 9th Tank Regiment [Col. Goto] with 90 tanks less two companies stationed on Guam. It fielded mostly medium Type 97s, with some Type 97 kai Shinhoto Chi-ha with the more lethal 47mm cannon, as well as the ubiquitous Type 95 light tanks. The Japanese naval infantry, usually uncoordinated with the army, operated a company of Type 95s and an unknown number of amphibious Type 2 Ka-mi vehicles.

On D-day, the USN landed most of the 2d and 4th Marine Divisions, with most of their organic tank battalions surviving the landing, although losses of tanks breaking down or submerged on the reefs remained serious. That night, the IJN naval infantry from Garapan launched counterattacks consisting of a doctrinal counter landing with their Ka-mi and landing craft and near dawn their Type 95s and infantry and Col. Goto's 4th tank company (more Type 95s) attacked down the coastal road against the northern (left) flank of the 2d Marine Division, assigned to the 6th Marines. Both these attacks were broken up. Shore party marines handled the counter landing with help from naval gunfire, and the morning main attack broke under fire from M4A2 tanks of a 2d Tank Battalion platoon, plus infantry bazookas  and naval gunfire. 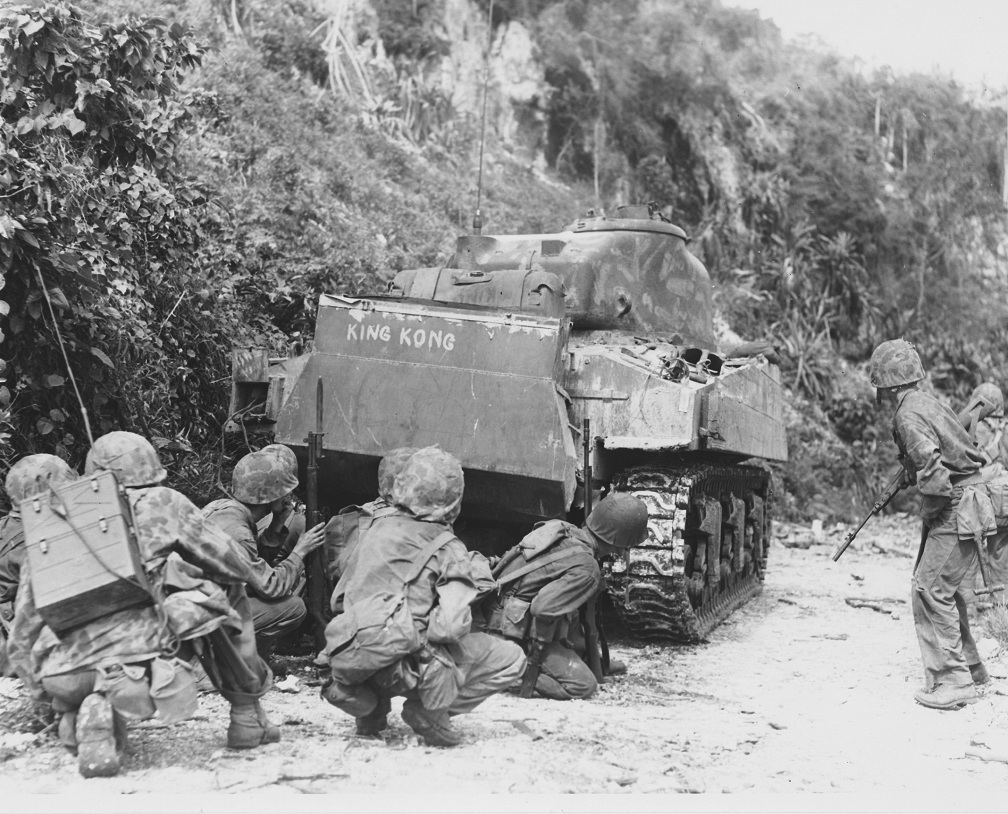 A platoon leader of C/4th Tk Bn leads infantry inland. Note the fording stacks have been dropped as soon as possible after landing. This battalion fought no enemy tanks, but all operated the M4A2 medium tank, plus a few dozen 'Satan' light flame tanks, on Saipan. (USMC Photo)

These were mere precursors to the main counterattack, ordered now by the Japanese commanders as an assault to sweep a little over a mile to the beaches. The night of 16/17 saw the remainder of Colonel Goto's tanks sent down the slopes of Mount Tapochau. This largest of Japanese tank attacks of the Pacific War began at 0200 on the 17th as the remaining 44 tanks of Goto's regiment attacked with troops of the 136th Infantry Regiment riding or following the tanks.

However, air reconnaissance had spotted a few tanks during the day and engine sounds filled the early hours of the evening. The Marines stood ready, although the night tactics of the enemy allowed them to come uncomfortably close. The Japanese tanks roared out of the darkness, but ran into ". . . a madhouse of noise, tracers, and flashing lights. As tanks were hit and set afire, they silhouetted other tanks coming out of the flickering shadows to the front or already on top of the [rifle] squads." From 0345 until 0700 on the 17th, the landing force flayed the Japanese with tank, bazooka, antitank gun, artillery, and naval gunfire. Only 12 Japanese tanks survived the battle. Not a single U.S. tank from 2d Tank Battalion fell out of action, but the infantry took almost a hundred casualties and the artillery suffered some losses in counterbattery duels with the large and varied Japanese artillery park. The surviving Japanese tanks reappeared later in the advance to the north, falling to the guns of C Company, 2d Tank Battalion and to Army light tanks. After the main Japanese assault, the 6th Marines commanders tried to get Capt Frank Stewart to tally how many tanks his company had knocked out, but his concern at the time was to keep his tankers from firing on friendly positions in midst of the chaos. Marine tankers began to recognize that their armor piercing projectiles were passing clean through the lightly armored Japanese armored vehicles, sometimes leaving them in action, and so they switched to high explosive 75mm ammo to make their hits count. Three quarters of the enemy tanks remained on the battlefield as smoldering hulks. 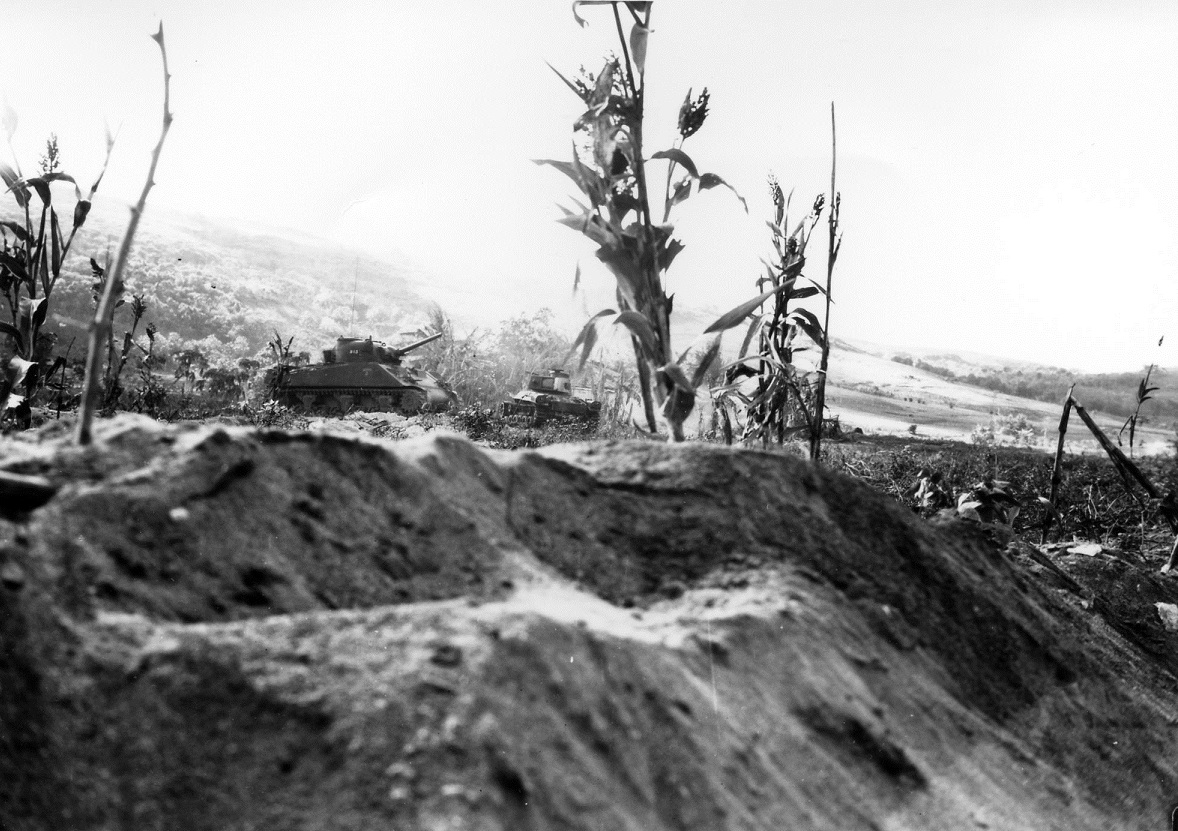 Mopping up after the great JA tank attack on Saipan. (USMC Photo) 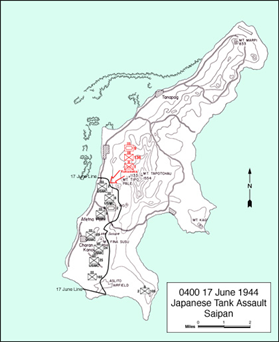 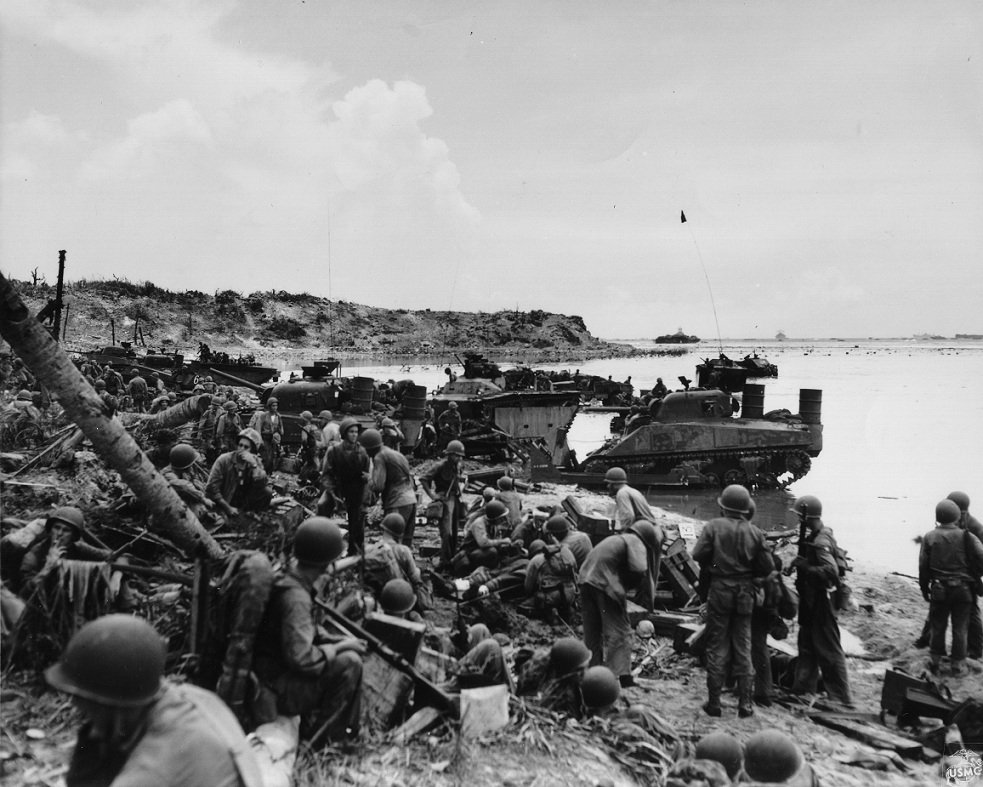 Guam, 90 minutes into the assault (USMC photo from Ed Gilbert)

The main counterattack against the landing fell upon the 4th Marines, and the M4A2 tanks of that regiment's tank company killed four accompanying Type 95 tanks. A fifth one was shot up the next day at an amazing 2,240 yards' distance, almost certainly a record engagement range for the Pacific War tankers. The 2d Separate Tank Company destroyed five more Type 95 tanks opposing the 22d Marines' advance on 24 July and three more fell to Navy aircraft attacks, eliminating the Japanese separate company. These piecemeal counterattacks of the Japanese whittled down their strength for no apparent gain. The Japanese commander on Guam thus decided to throw his best effort at the landing force on the night of 25-26 July, mostly against the lines of the 3d Marine Division and its 3d Tank Battalion. This time, the Japanese tanks lost their way on the trails and did not join the attack, leaving the American tankers free to demolish the attacking infantry. 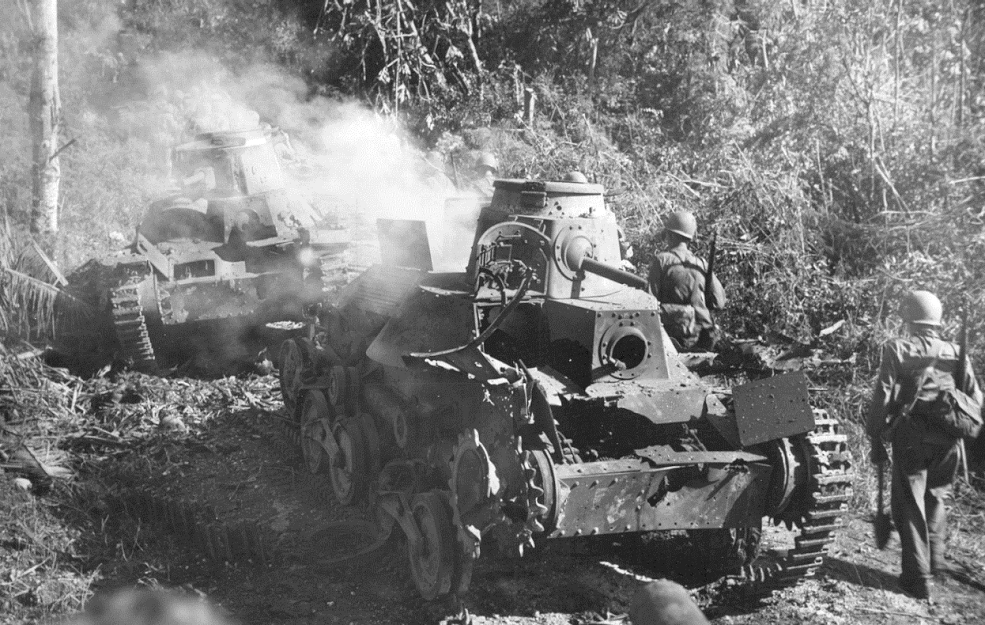 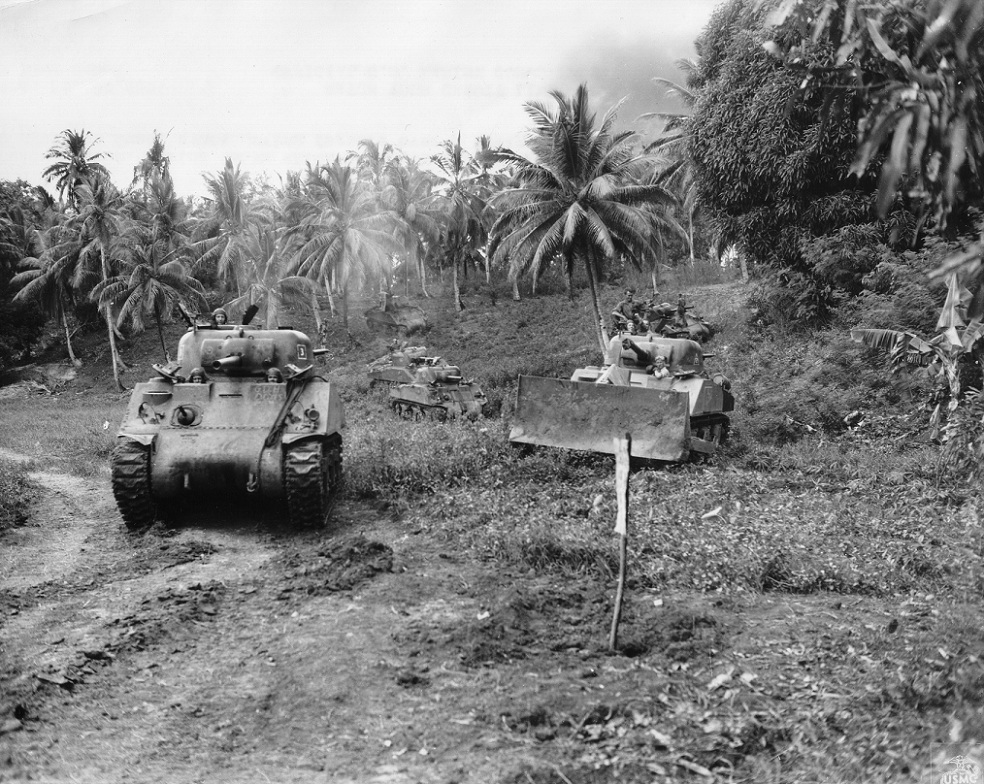 M4A2 of  4th Marines Tank Company move out. The M4 tank dozer was introduced in this battle.(USMC photo from Ed Gilbert)

The surviving Type 97 mediums and a few Type 95s of the late Col. Goto's 2d Company had withdrawn to the last northeastern enclave at Tarague. Early in the morning of 6 August, two mediums and a platoon of infantry attacked down a trail into the lines of the 77th Infantry Division, killing 15 and wounding 46 U.S. soldiers before withdrawing intact. Later that day, an advancing tank-infantry patrol of the 9th Marines encountered a roadblock, from which a Japanese tank scored three hits on an M4A2 before being knocked out. Then, the night of 9 August, it was the turn of the 2d Battalion, 3d Marines to receive a tank-infantry attack, as it moved down a trail typically inadequate to support the American mediums tanks. By noon the next day, bulldozers had cut a tank trail and the M4A2s moved up with 3d Battalion, 3d Marines to counterattack. Nearby, the 9th Marines eliminated another light tank roadblock. The morning of 10 August, the 2d Battalion, 3d Marines took its revenge, attacking with tank support into the Japanese tank bivouac. The accompanying M4A2s destroyed two Type 97s but found the remaining seven Japanese mediums abandoned for lack of fuel or spares. Effective Japanese resistance had ceased. 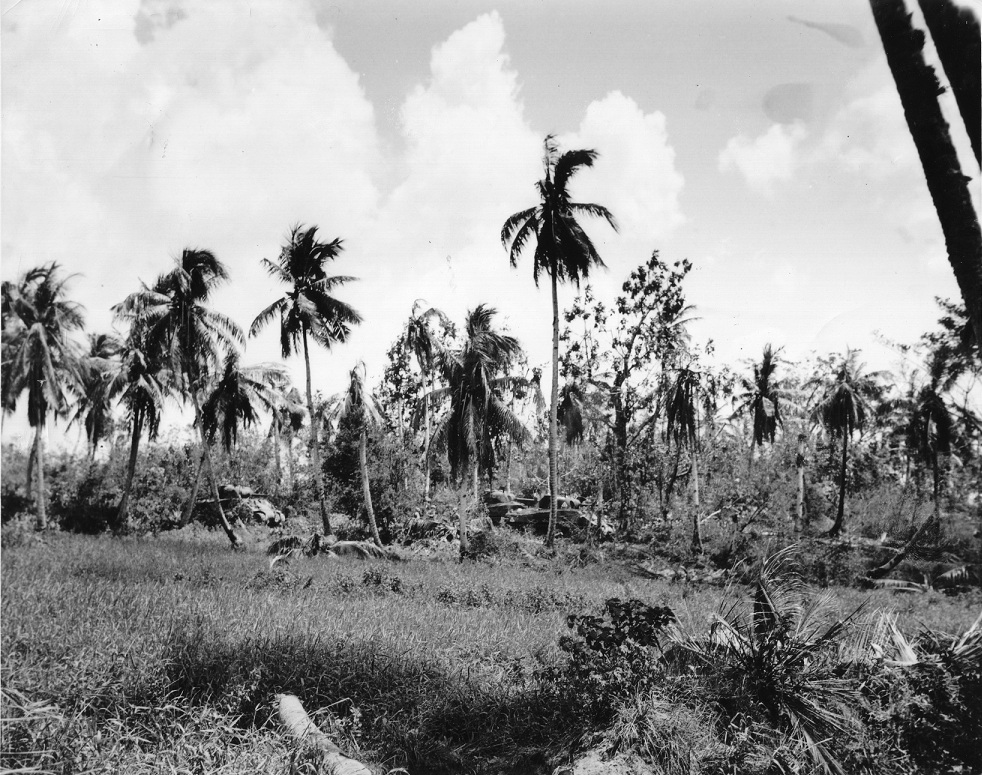 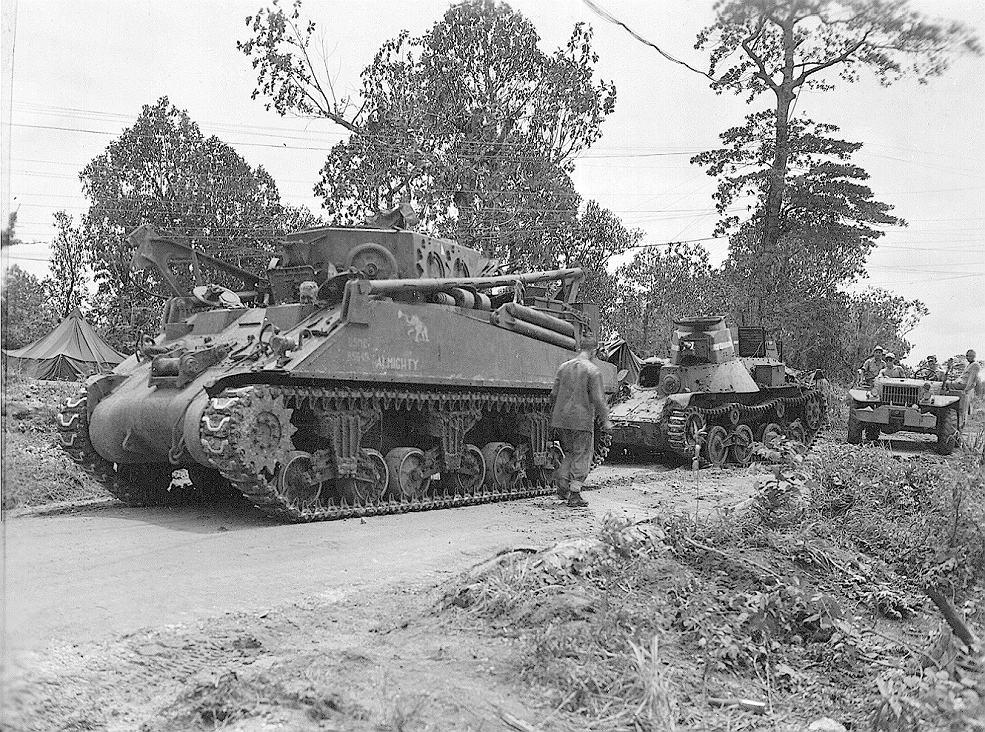 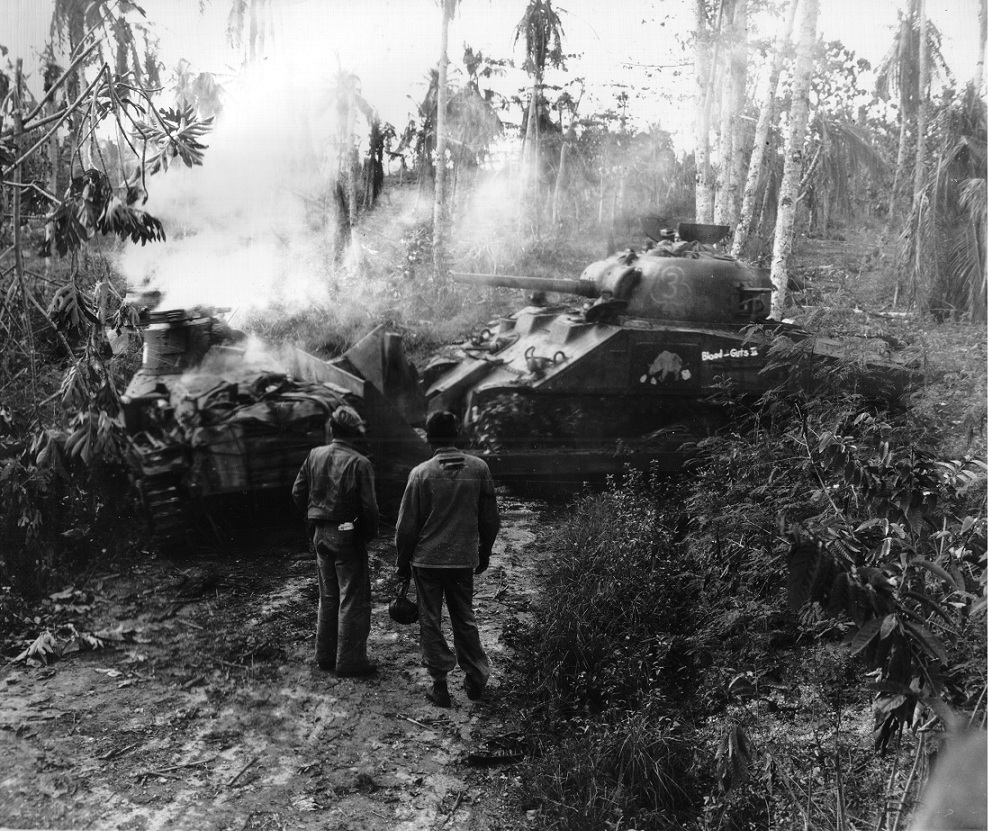