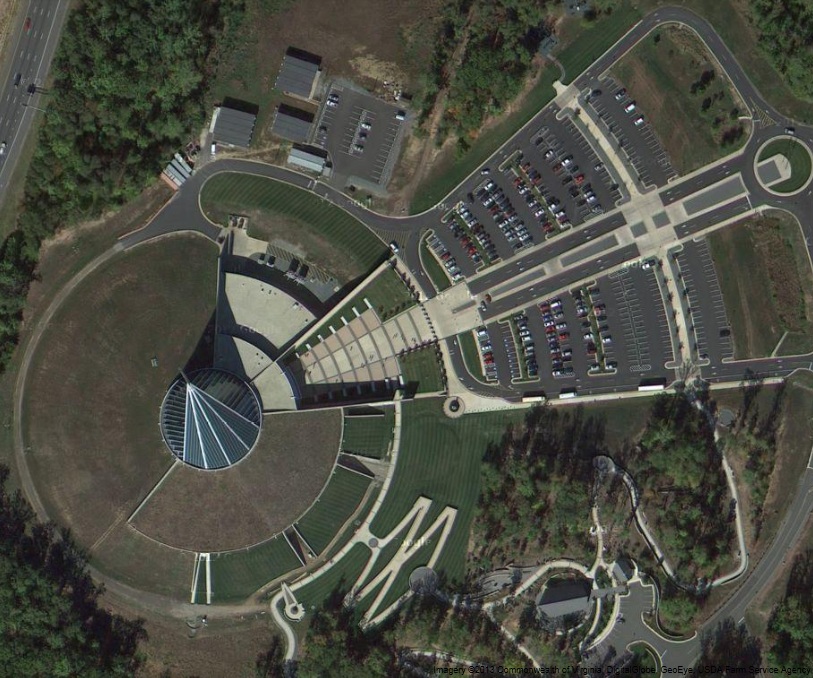 This week in 1945 saw the iconic raising of the flags on Mount Suribachi during the fight for Iwo Jima. Given that it seems to be one of the more significant events in US Marine Corps history, I figured this would be a good opportunity to go and review the Marine Corps museum. 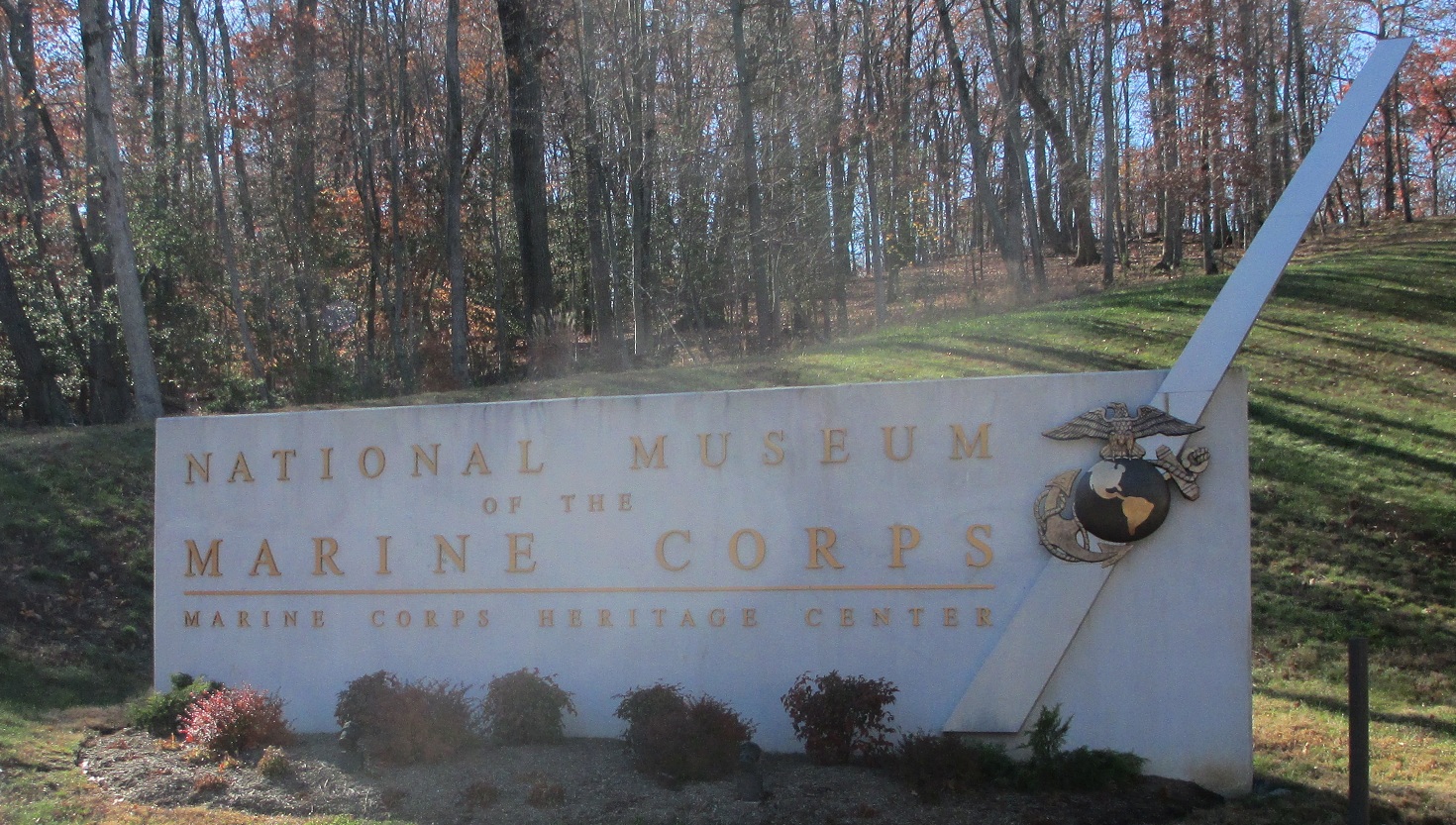 So, I duly suited up in my contamination suit, and entered Marine territory, Quantico, VA.

It’s certainly easy to get to, right off I-95 and only a short drive from D.C. It looks like there will be a series of museums on that stretch of roadway, the National Museum of the US Army is going up just up the road, as is the Americans in Wartime Museum.

Now, often times you’ll hear a building described as taking inspiration from something. Sometimes, like the Canadian War Museum, you can actually accept the inspiration as truth. Other times, you are wondering what the architect was smoking that he thought it looked similar to. For the NMMC, however, one doesn’t need to have it explained. Just looking at the structure leaves you in no doubt the inspiration was the second flag-raising on Suribachi. 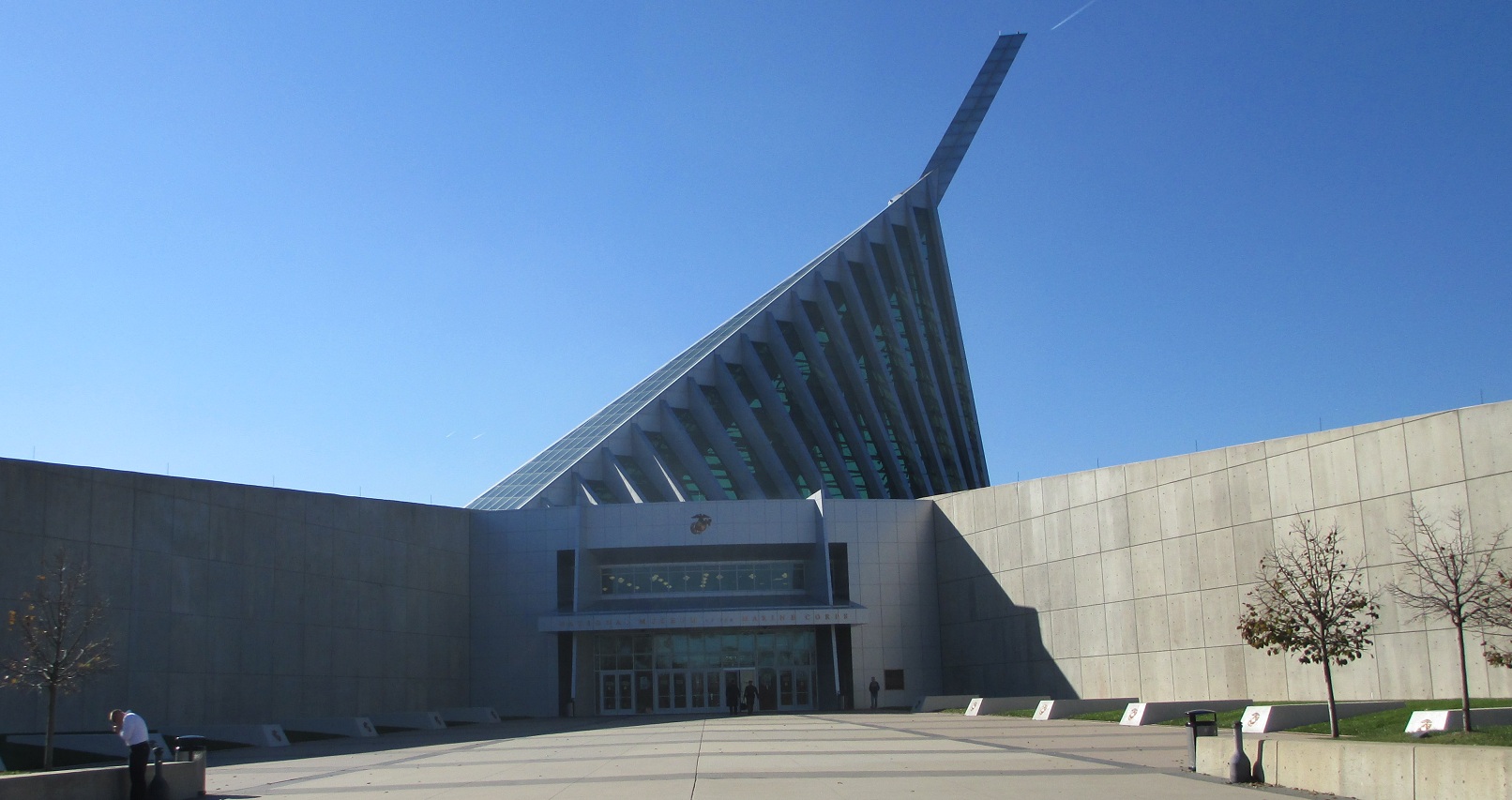 Being a US government museum, admission is of course free. Just wander in the front door, stop off at the information desk for a map, and you’re in the rotunda. 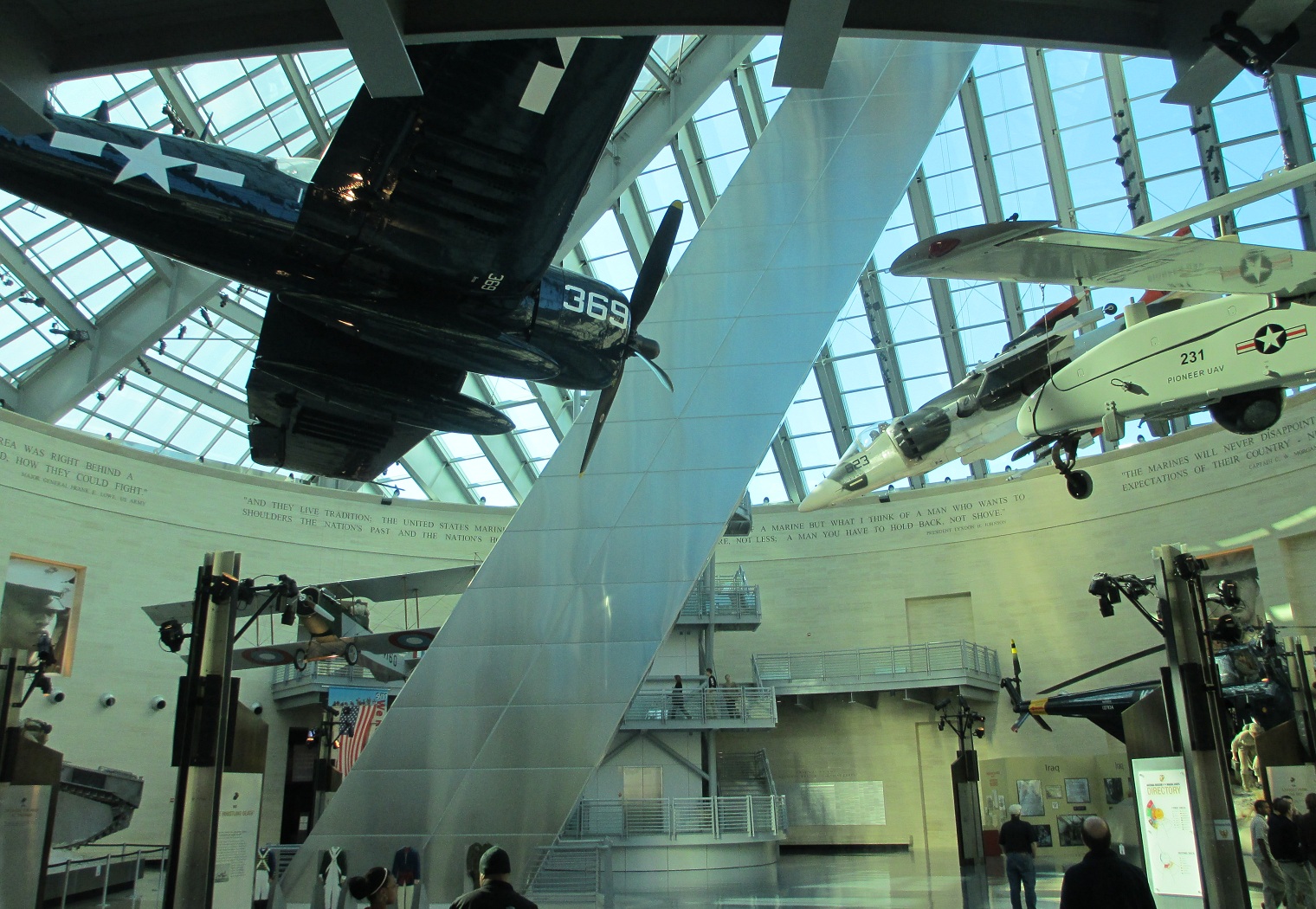 It doesn’t seem to be part of the tour per se, more a setpiece to put you in the mood. Nice and airy, surrounded by quotes carved into the walls about how great the Marines are. (Well, what did you expect them to say?). The tour of the museum itself starts in a little door in the corner. Well, it would be a corner if the rotunda wasn’t round. At least it’s marked. 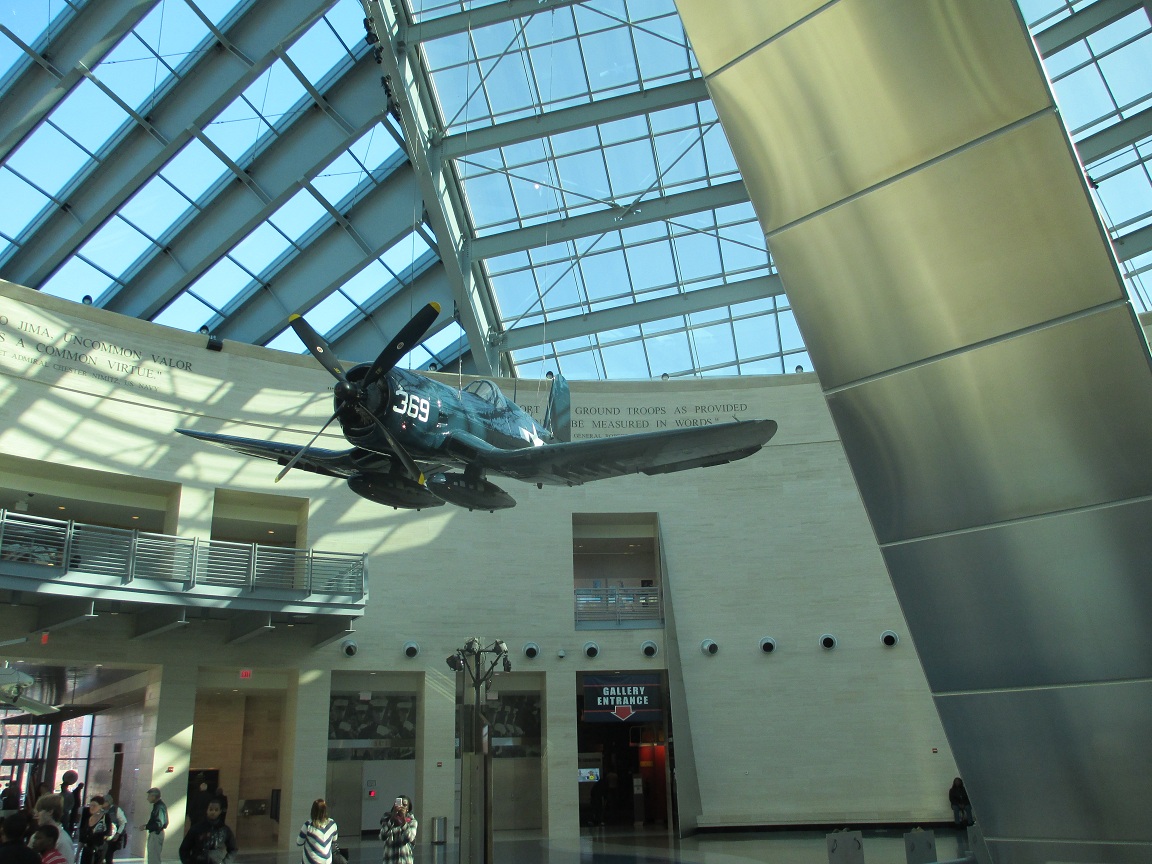 You get about three feet in when you are presented with a dilemma. To the right is a bus (well, the front half of it) and yellow footprints. Obviously the Basic Training exhibition. To your front, a fighting top. To the left, a hallway. Worse, there’s also a cinema option, which is a short ten minute thing about the meaning of being a Marine. 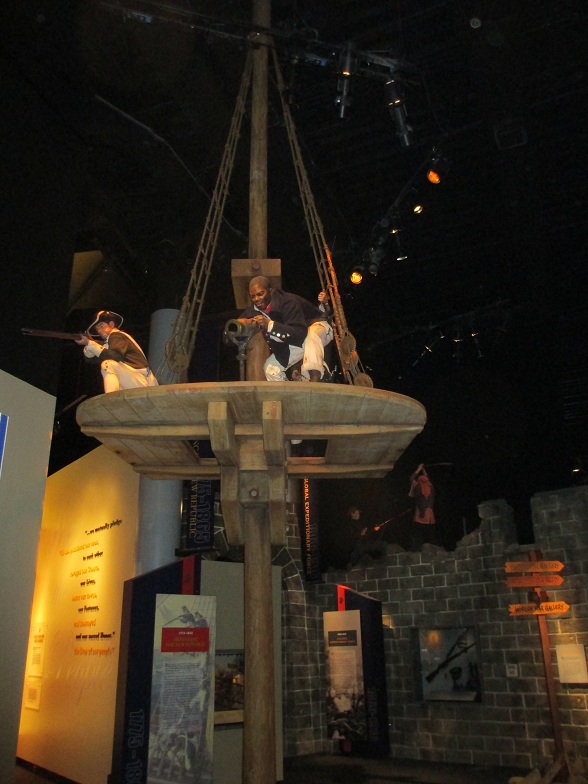 OK, I like flashy lights and noises. I go into the Basic Training section. If you want, you can go into a booth and get yelled at by DIs in stereo (There’s a male DI booth and female DI booth). The exhibit is reasonably compact, and reasonably enough more suited to the 12-14 year old segment. After all, they are the potential recruits in a couple of years. Brief description of basic training, with varous ‘games’ to play, such as ‘lift this rucksack’ or ‘inspect this manikin, how many uniform violations can you find?’ 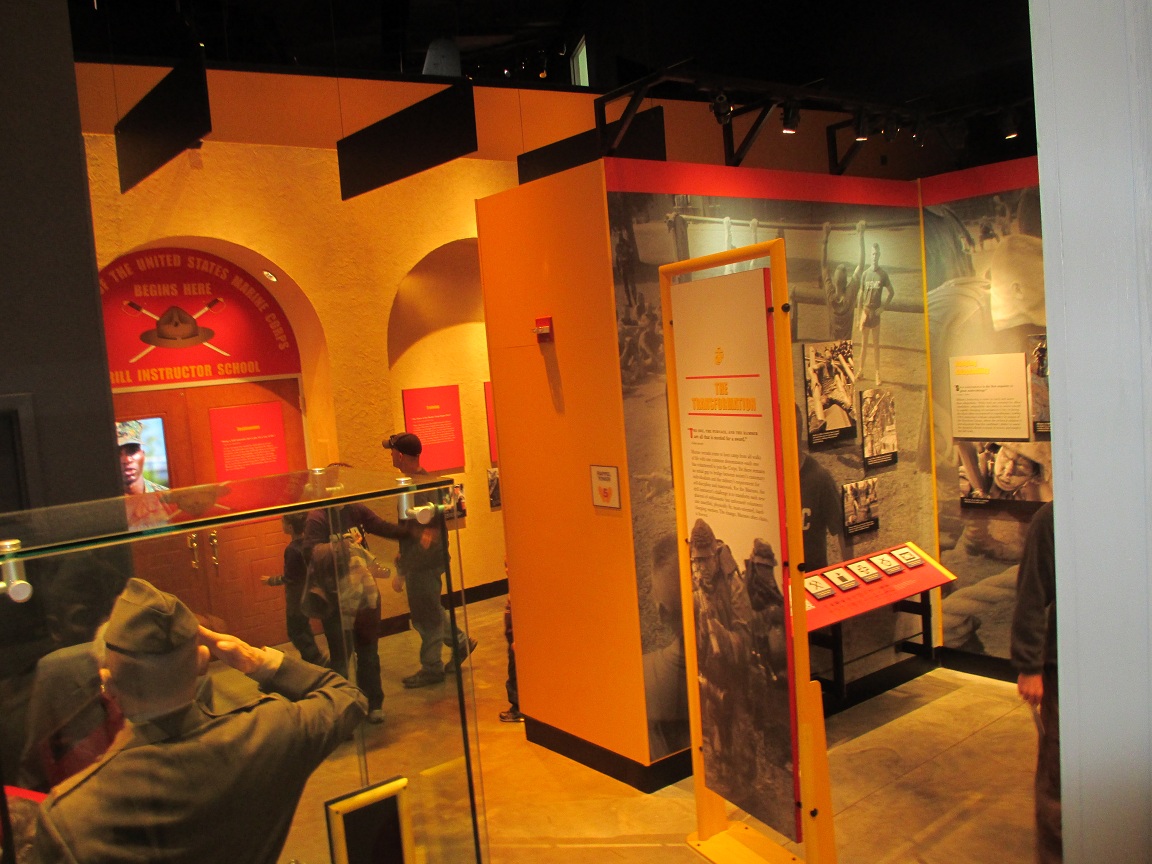 I think I preferred the equivalent exhibit at the Army’s National Infantry Museum. It was a bit more matter-of-fact and more closely aligned with the 17-18 year old demographic. I’m sure there was a conscious decision made for the two differing methods. 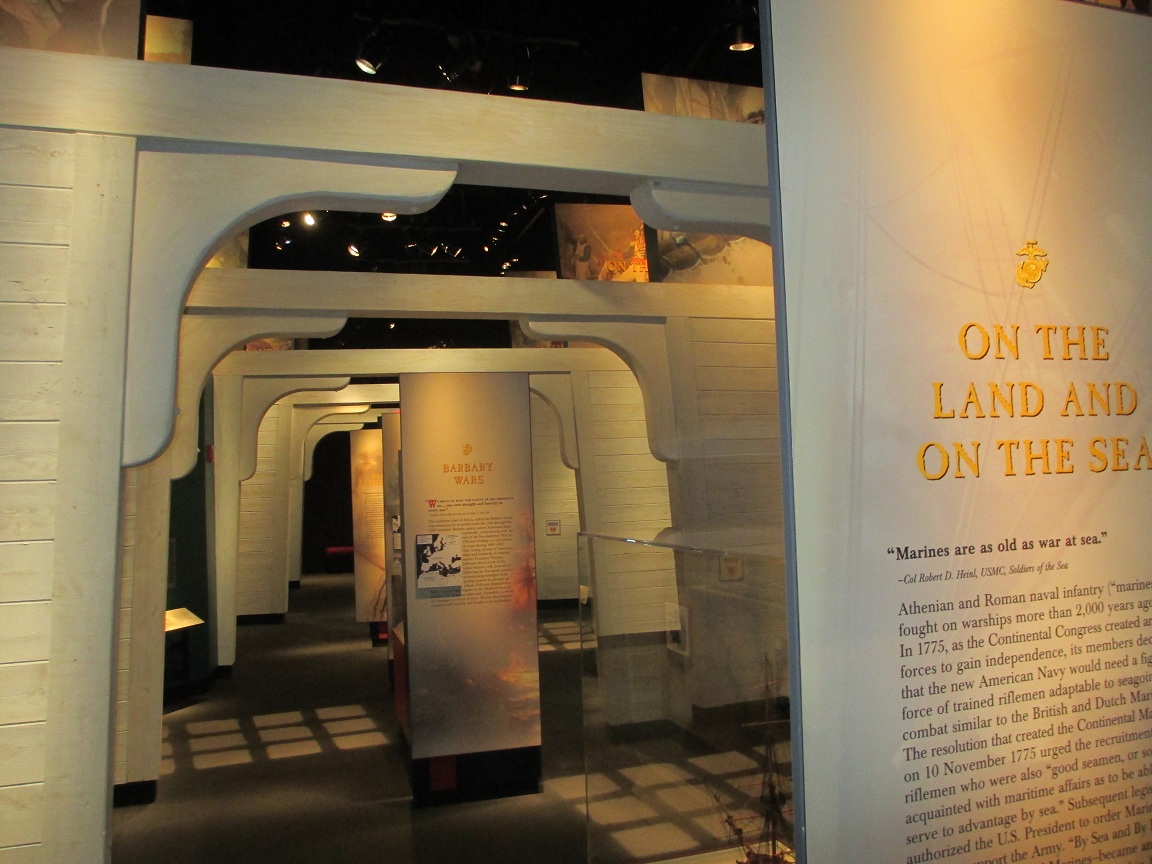 Anyway, come back out, and hop across the hallway to the fairly innocuous entranceway on the other side. This traces the Corps through the days of the Age of Sail, with micro-artefacts, dioramas, and textual information. It’s interesting enough. 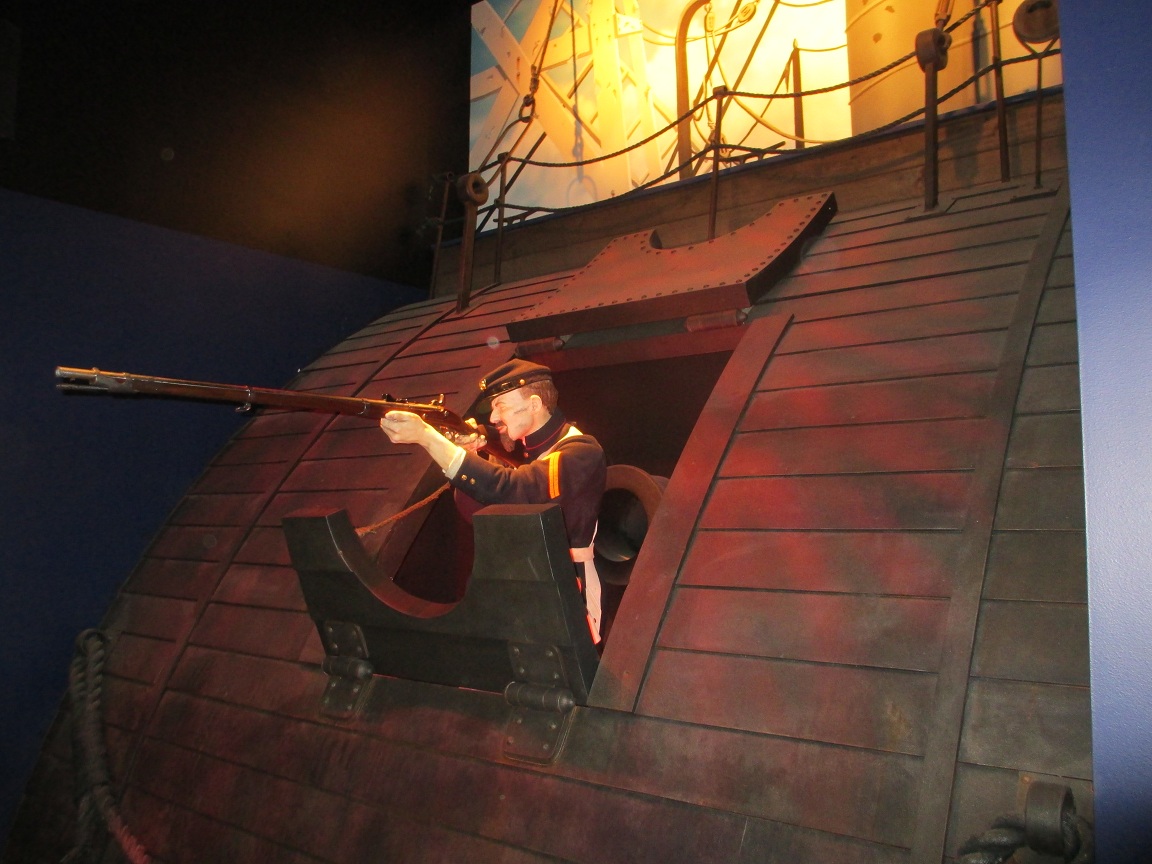 The Civil War does get a bit of a mention, but the Marines were not a significant factor. There is also a bit about the Confederate Marine Corps, which I have to say is a piece of military history I was unaware of but makes sense.

The layout is common to a number of musea today, ‘compartments’ of exhibits in which you access from a main corridor, then meander around in a path before being deposited back into the corridor. It works. 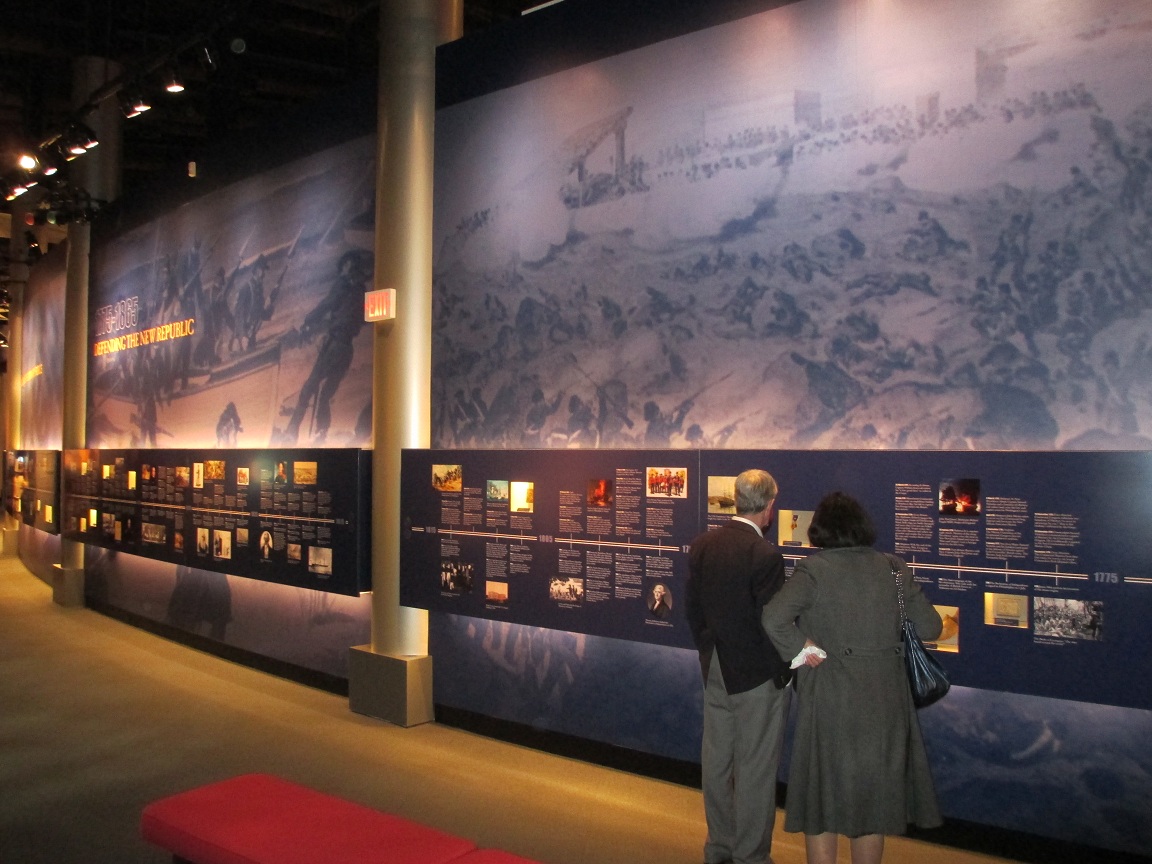 There is a long timeline on the one side of the central corridor. Above and alongside the corridor are various displays to include aircraft hanging from the ceiling. As in many examples, the surrounding environs prevent you from getting a proper look at the exhibit, so it’s as much a matter of providing atmosphere as being an exhibit in itself. 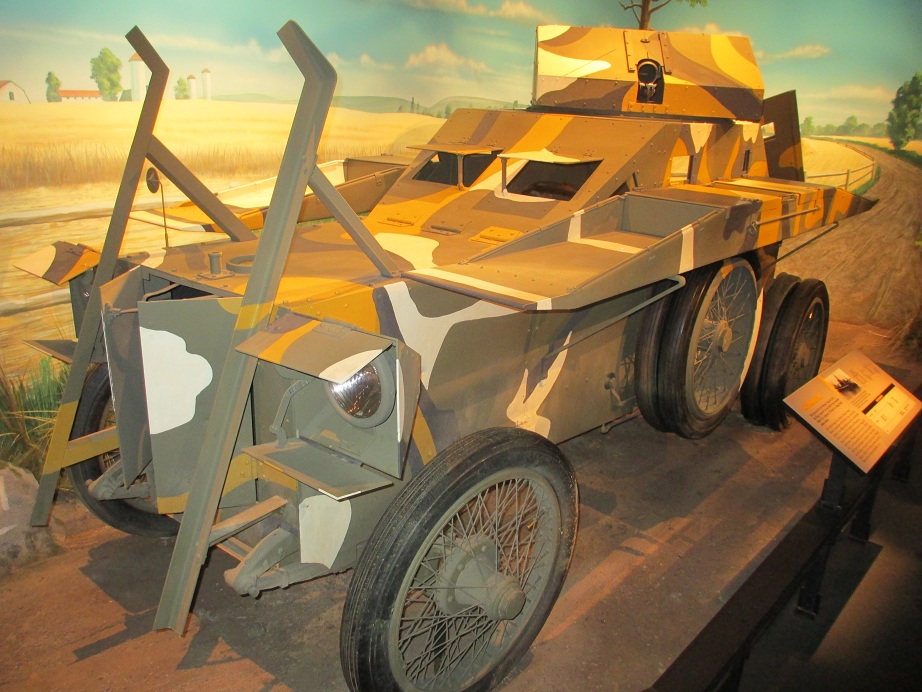 There are certainly some interesting larger exhibits, such as this King armoured car. Probably the most intriguing, and I’m sorry I can’t show it properly with a still photo, was this depiction of Belleau Woods in the Great War section. 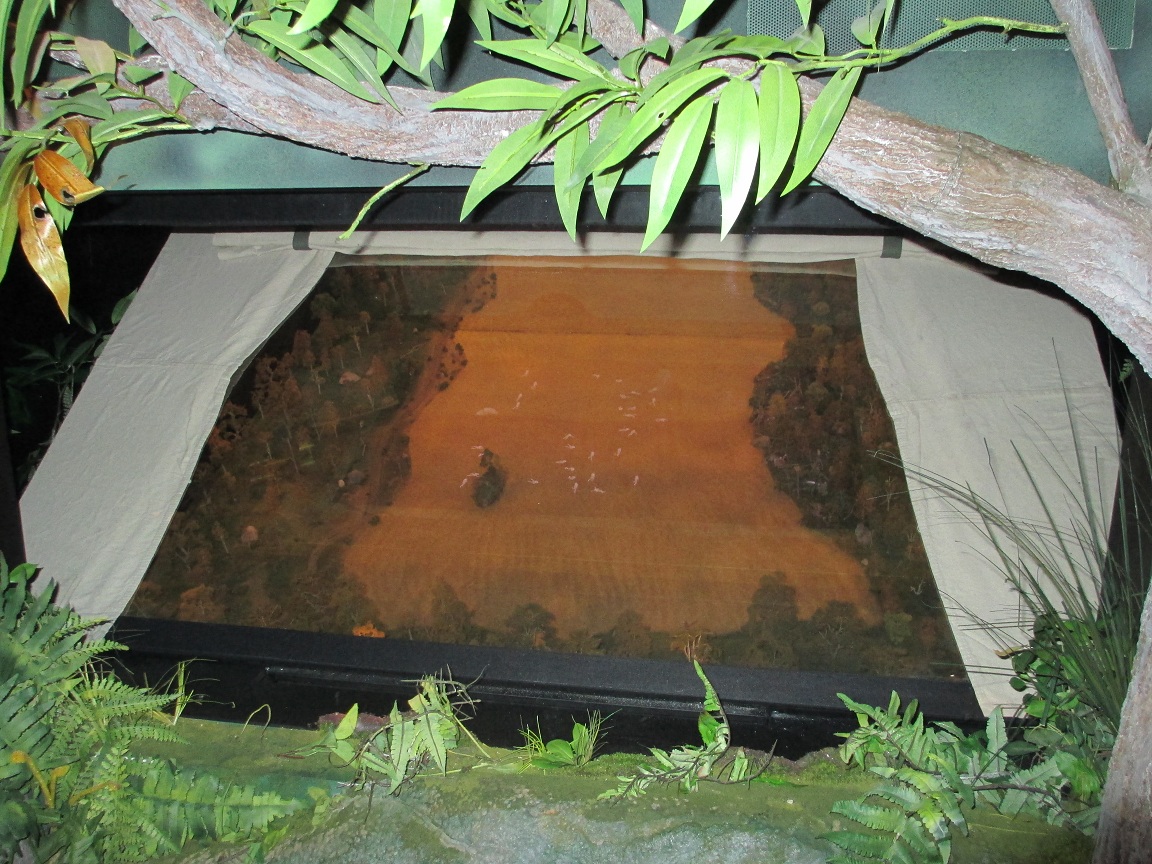 This little piece display was a fantastic example of the use of technology, combining two-way mirrors, 3D models and a computer projection system. Descriptive and immersive. (What we have here is an animation of the Marines charging across the field and getting mowed down by German machineguns being superimposed onto one of the 3D models). I could definitely see more of these things being used, I wonder how much time and money they cost?

Wasn’t overly impressed by most of the rest of the WWI section, though, but certainly it hits all the highlights and all the artefacts are exhibited clearly and well labelled.

There are a number of large dioramas in the various sections in which one can feel a little more immersed, and they’ve done a good job of them. The Korean War snow diorama is decidedly chilly. If you’re wearing short sleeves, you may not want to hang around for the full five minutes. I particularly liked the Vietnam firebase, though. 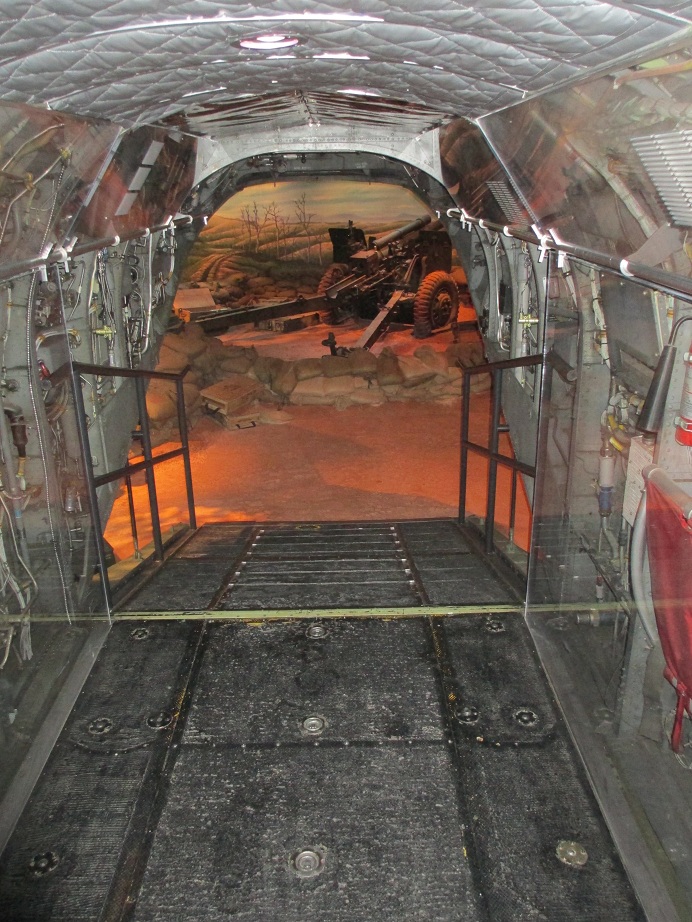 To enter that diorama, one has to go through half a CH-46. (They cut it down a bit for space). They’ve got speakers hitting you with engine noise, the floor vibrates, and it even ‘smells’ right. Anyone who’s flown a CH- will know what I mean, that combination of hydraulic fluids, oils, jet fuel and exhaust. I don’t know if they actually had heaters emitting engine exhaust, but if not, it was so immersive that I certainly believed I could feel it. Extremely reminiscent of my doing the same thing out of CH-47s. Far and away the best ‘entrance’ to a diorama I’ve ever seen, though perhaps because I could ‘fill in the sensory blanks’ from experience and memory (Shame the rest of the firebase was a little less interesting). The Inchon one is optional, and probably worth the miss. 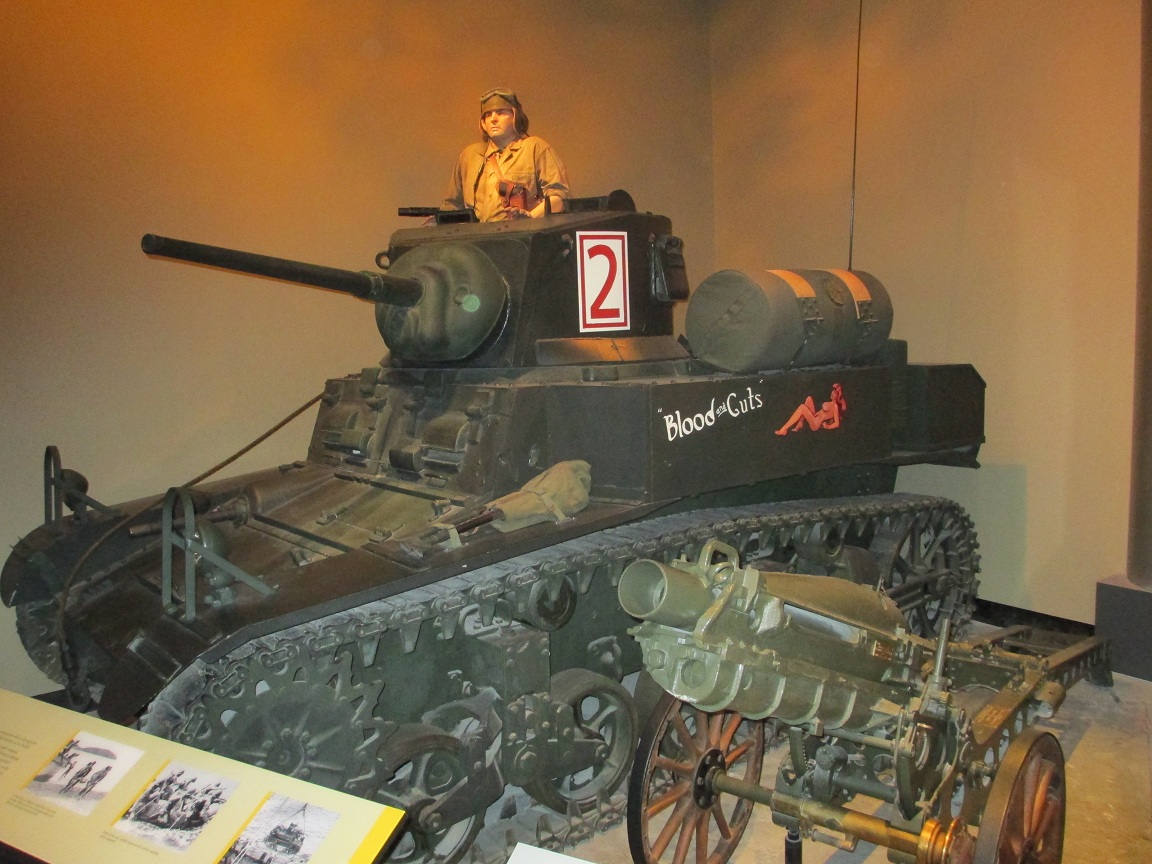 Yes, there are tanks. Shame we were never allowed to paint naked ladies on our tanks when I was on them. Also not quite sure how the sandbag ended up between the numbers 1 and 2 roadwheels. Maybe a hard left turn? 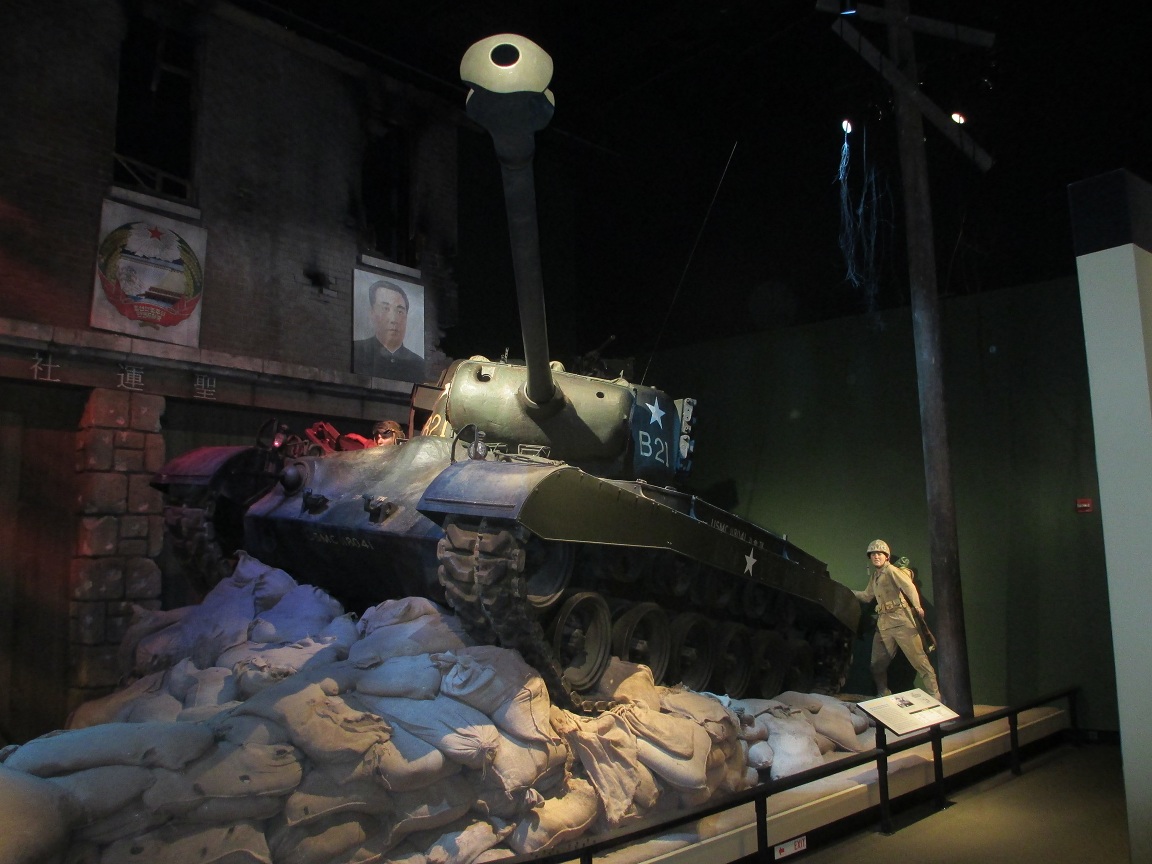 Although I didn’t ask, I presume that the museum has plans to expand. As I look at the satellite view, they can easily add more on to the arc. The reason I make this presumption is that the museum sortof stops at the turn of the century. There’s a big board with the 9/11 timeline on it, but not much else. Pretty much the only significant 21st Century observation I saw was on the floor of the Rotunda in what didn’t look anything as much an exhibit as an afterthought. I’m pretty sure the Marines have been doing something in the last decade, it’s a little disappointing that this modern museum doesn’t have much about it. Then again, I did overhear one mother talking to her son as they were reading the 9/11 timeline “Oh, this happened before you were born…” Maybe it’s for the best. 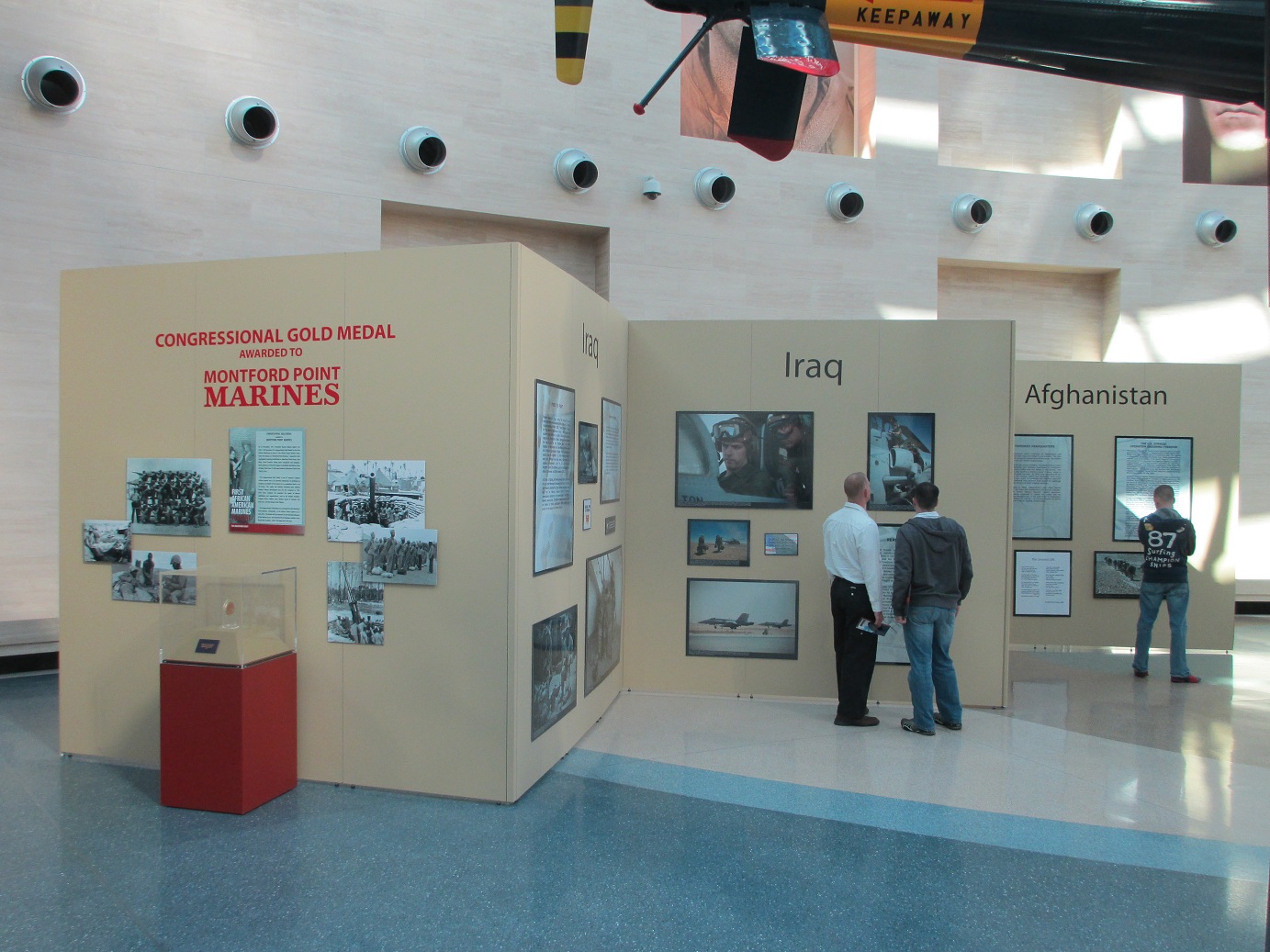 A gift shop, of course, exists near the exit, with a nice lego display. Nothing there that particularly caught my attention to purchase, though. But then, I’m not a Marine.

Overall, budget 3 to 4 hours to properly tour this museum. Definitely required visiting for anyone with an interest in the Corps, the facility is modern, clean, and does a reasonably good job of getting its point across (Which, let’s face it, is selling the Marine Corps), even if it ‘misses’ on occasion. When the US Army museum opens up in 2015 a few minutes along the road, it will make an interesting comparison. And also a much more appealing destination to spend the whole day!

One last question, though. This is a statue on the grounds of the museum. What does Fort Benning have to say on the matter? 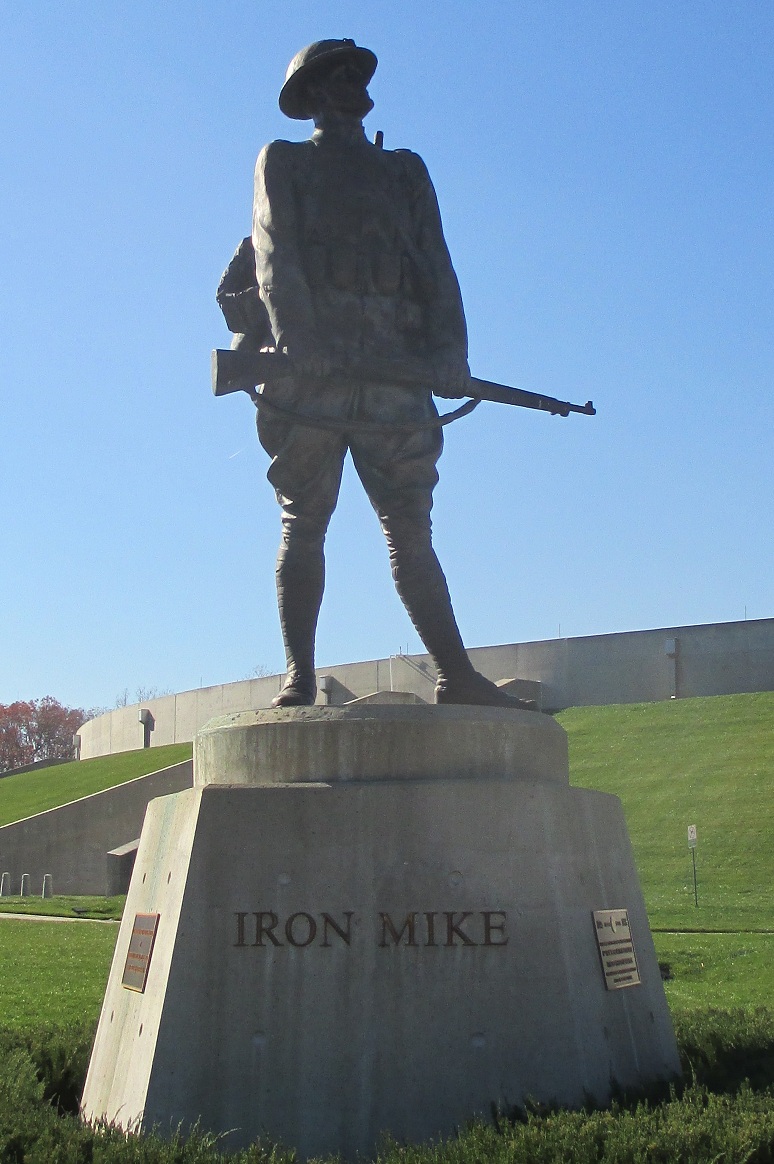