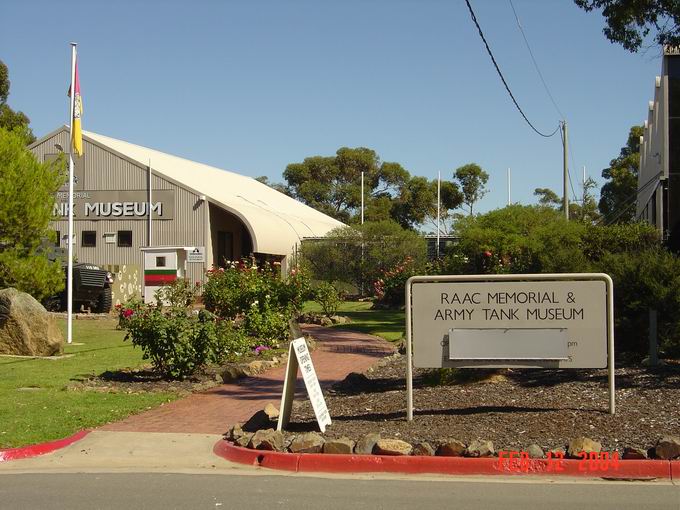 The Royal Australian Armoured Corps Memorial and Tank Museum is a bit of an oddity in the tank museum world. Most tank musea are organisations which may be government operated, and sometimes Army operated. Puckapunyal’s museum, however, is a ‘paragraph-and-line’ unit of the Army. As a result, their operations are a little different. 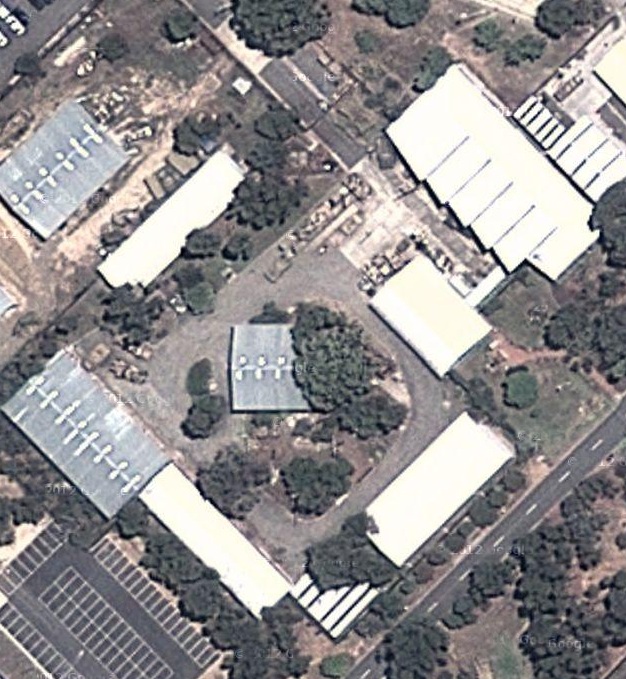 Firstly, before you even think about visiting, visit the website and check the hours. I made this foolish mistake myself, of assuming that a museum might actually be open during times when people can visit it. At the bottom of the ‘about us’ page on their website, there is the ‘visiting information’. You will note that it is not open most weekends. This is a significant poor start, and is a result of the funding and organizational structure of the unit as part of the Army. As you can imagine, in the Army’s operational budget, a museum is about as far down the priority list as it’s likely to get. It allows for pretty much just one staff member. His name is Joe. 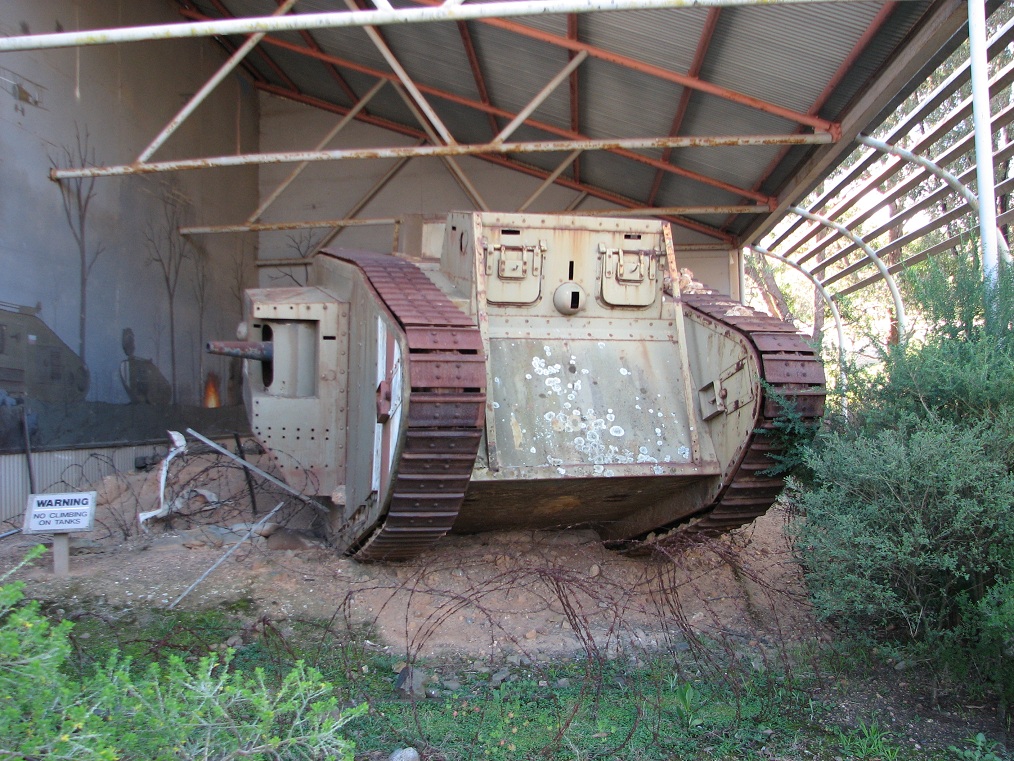 All things considered, this museum is not all that hard to get to. Puckapunyal (what does that mean, anyway?) is about an hour’s drive North of Melbourne. Even tourists can realistically get to it, the road is good, but watch out for the average-speed cameras. Hop off the main road, it’s only about 10km to the base. You will need to provide ID to get onto the base, and ID for every adult in the car. There’s even a dress code (No flip-flops!) 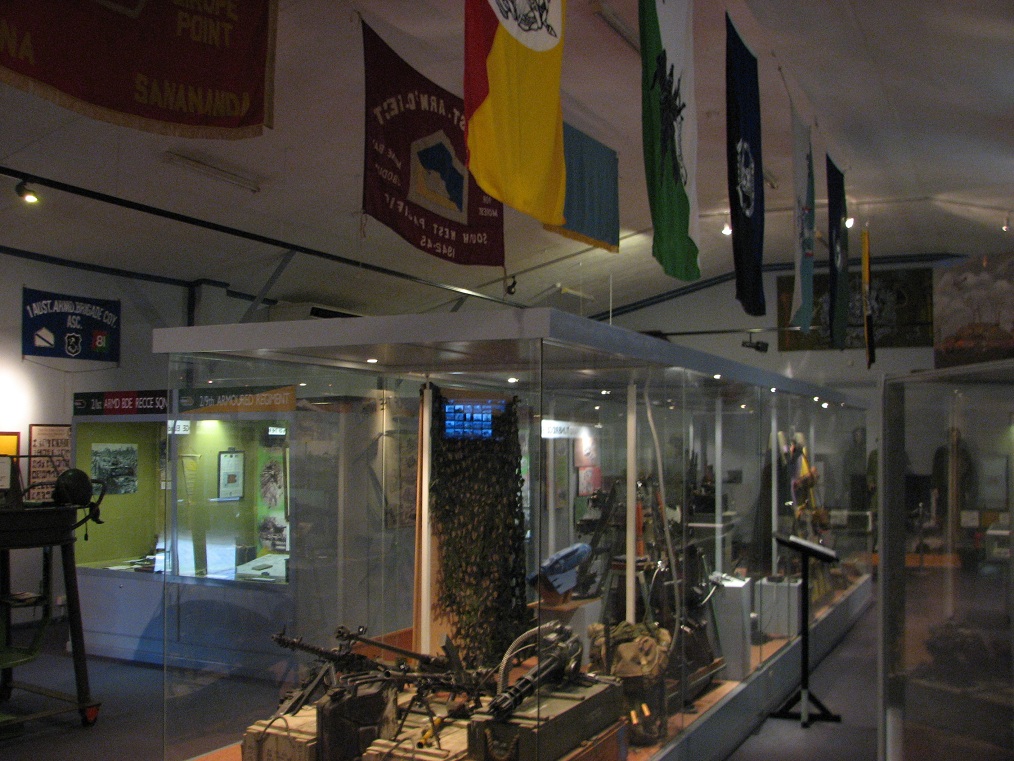 The first stop is, of course, the cash register, where Joe will happily relieve you of about $5. Odd, for an Army unit, but anyway. They need the cash. This hall will give you a crash course on Australian Armoured Corps history, and has a number of small artifacts to gander at. It’s not massive, you’ll probably be done with it in fifteen minutes or less. 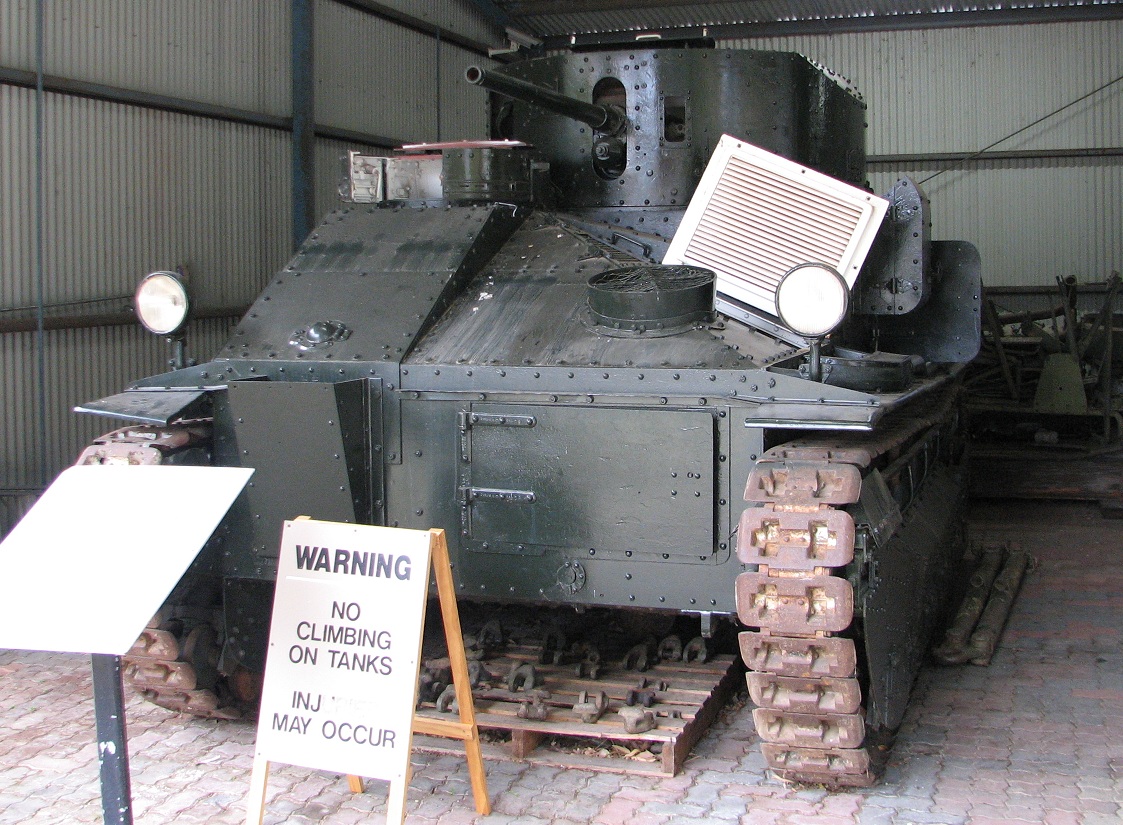 Then you wander outside to where the fun stuff is. Near as I can figure it, this is the largest public collection of armour within, oh, 8,000 miles. That being the case, it is a bit of a shame the condition of the equipment. Cosmetic external paint jobs is predominantly as far as it gets. See for example, this M3 Medium. Outside, it looks fine. 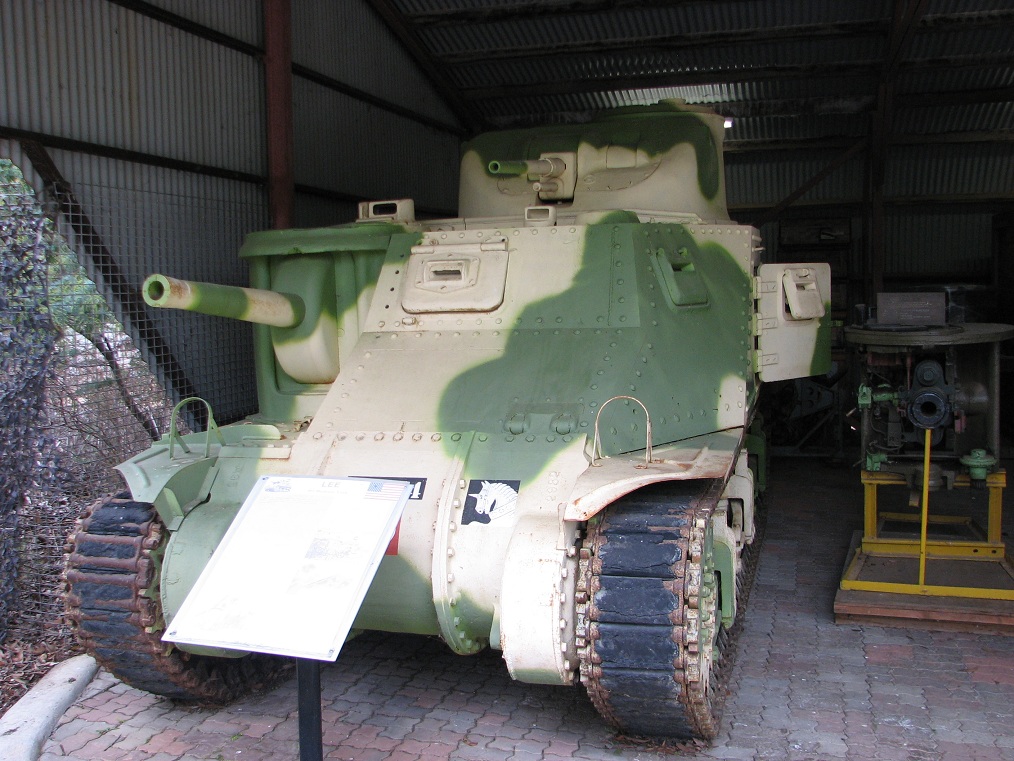 Inside, however, it’s a slightly different story. 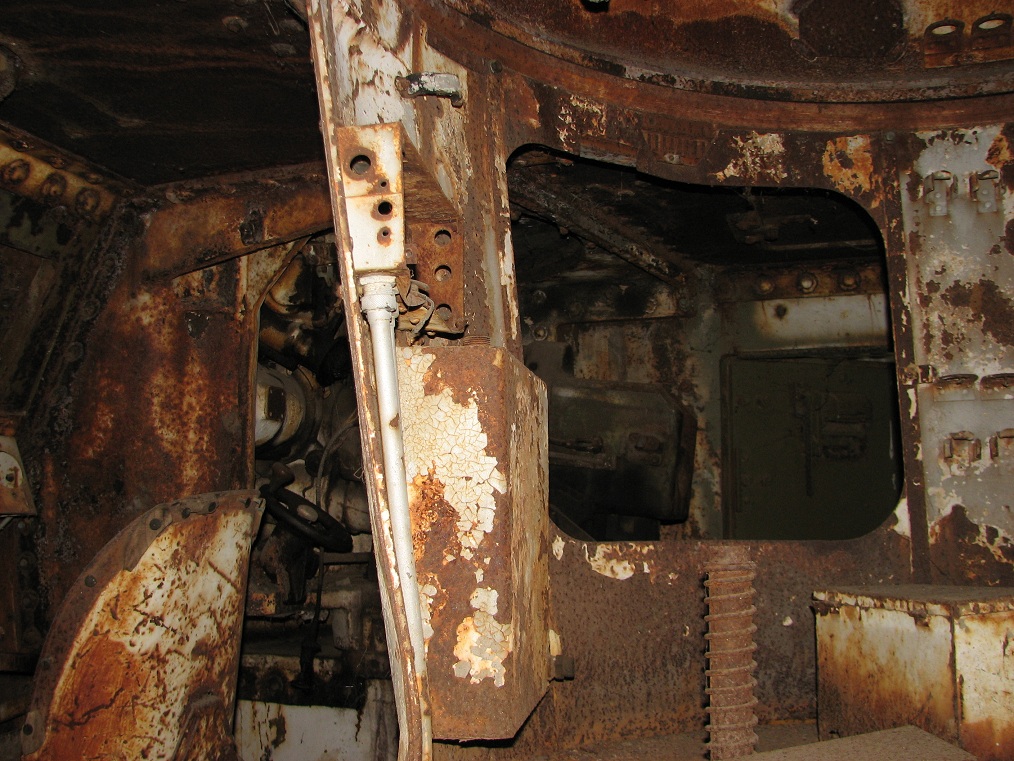 I’m not going as far as to say that they’re all that much of a contrast, but the general concept of ‘the things are rusting away outside’ is pretty much a standard theme. 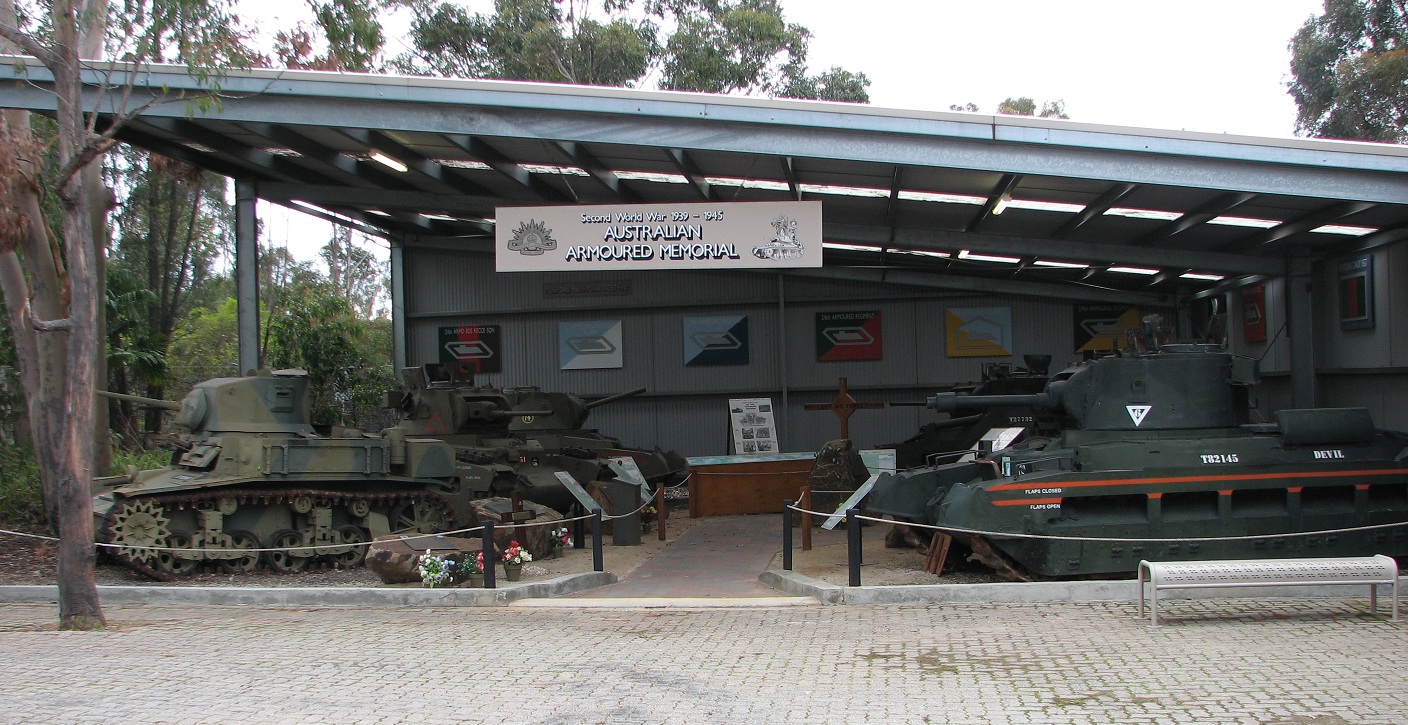 On the plus side, at least, most of them are protected from the sun and the rain by overhead cover. And it's not as if we're talking Aberdeen winters. Not being exactly a major tank-using nation (In relative terms… for the region, they’re a tank powerhouse), there is a little less variety in the equipment that was used in terms of the major end products. That doesn’t mean, however, that the Aussies didn’t engage with a fair bit of creativity of their own, to meet their own local needs. 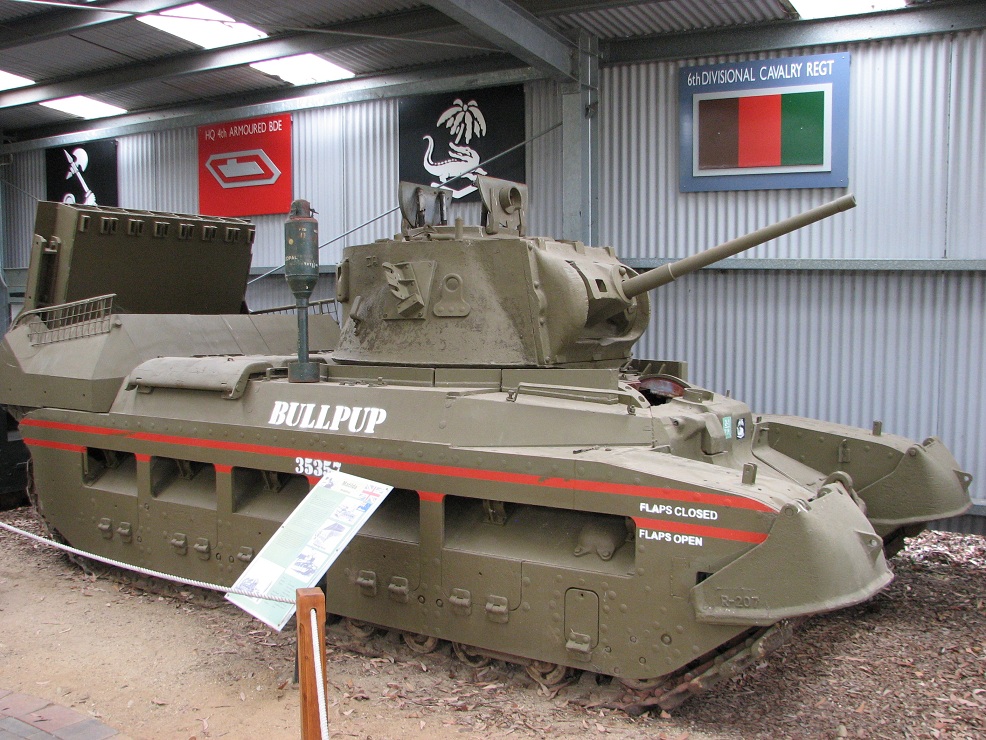 One of the more unusual vehicles the Aussies used which they didn’t come up with on their own was the Covenanter AVLB. As a tank, the vehicle was an operational disaster, but the Aussies actually used their AVLBs operationally. Not sure quite how they got around the cooling problem in the tropics, but maybe they didn’t drive them too far. Anyway, this is one of the few Covenanters left. 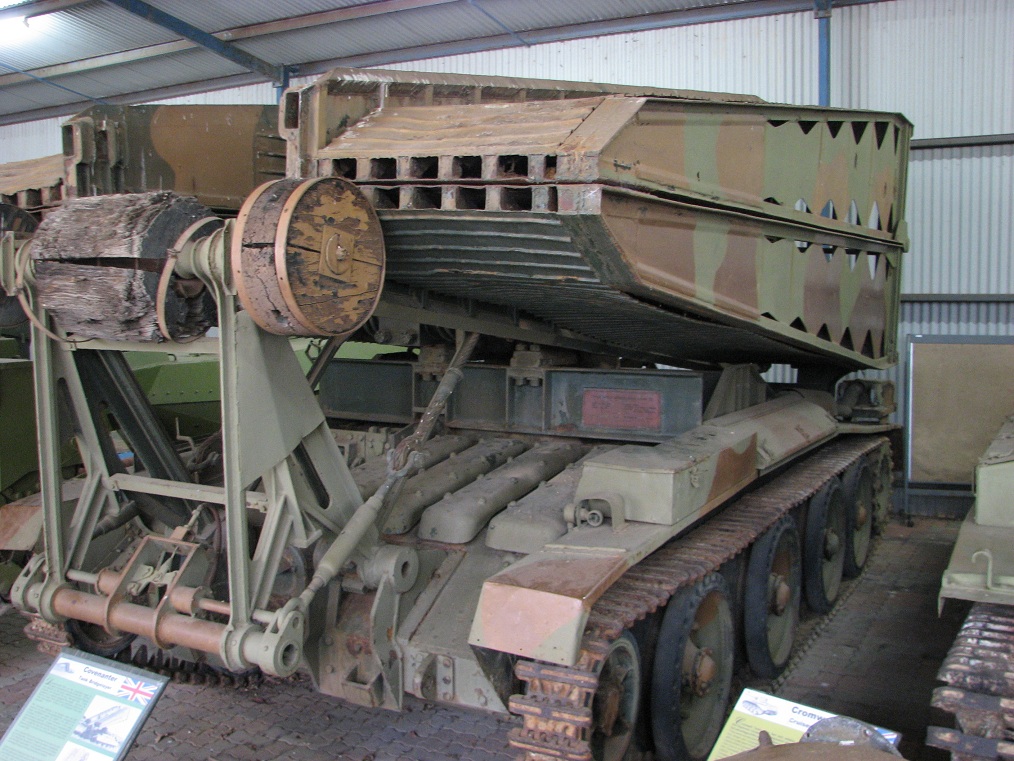 Although at first there appears to be a lack of variety (you’ll see a number of different Matildas, M3s, M4s and M113s for example), closer examination actually indicates that they are some of the more varied ‘family’ collections out there. None of the four Matildas are the same, for example. 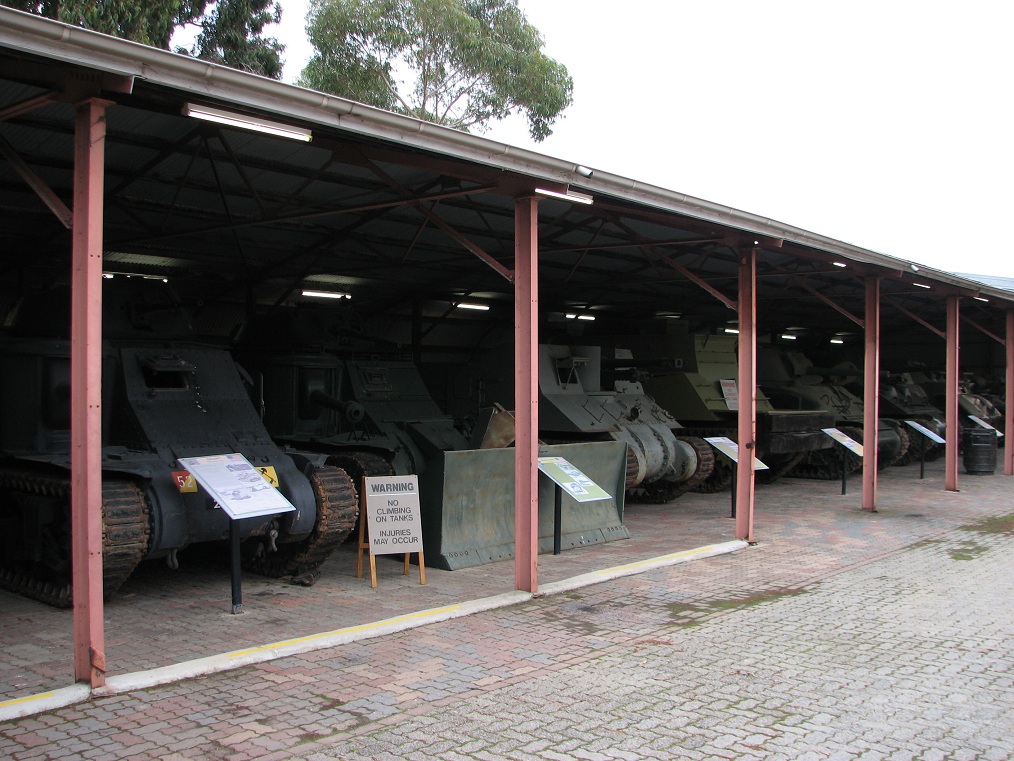 The museum is basically laid out in a double-courtyard sortof affair, with exhibits in sheds along all the sides, and one additional fairly large hangar right in the centre. This is, in effect, the OpFor hall, with various gizmos primarily of East Block design.

A small shed is almost overlooked on the West edge, this contains some light armour, including a couple of Japanese pieces. 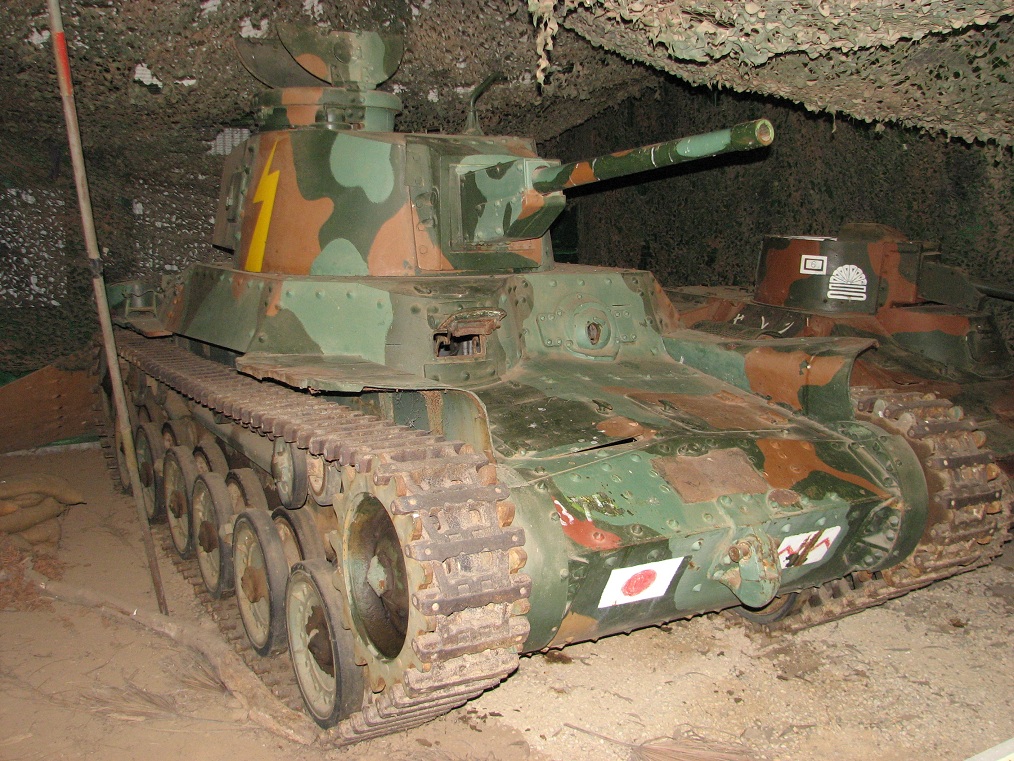 The AFV connoisseur will note a couple of vehicles which never entered Australian service, such as the APC in the background here, which was an evaluation vehicle. 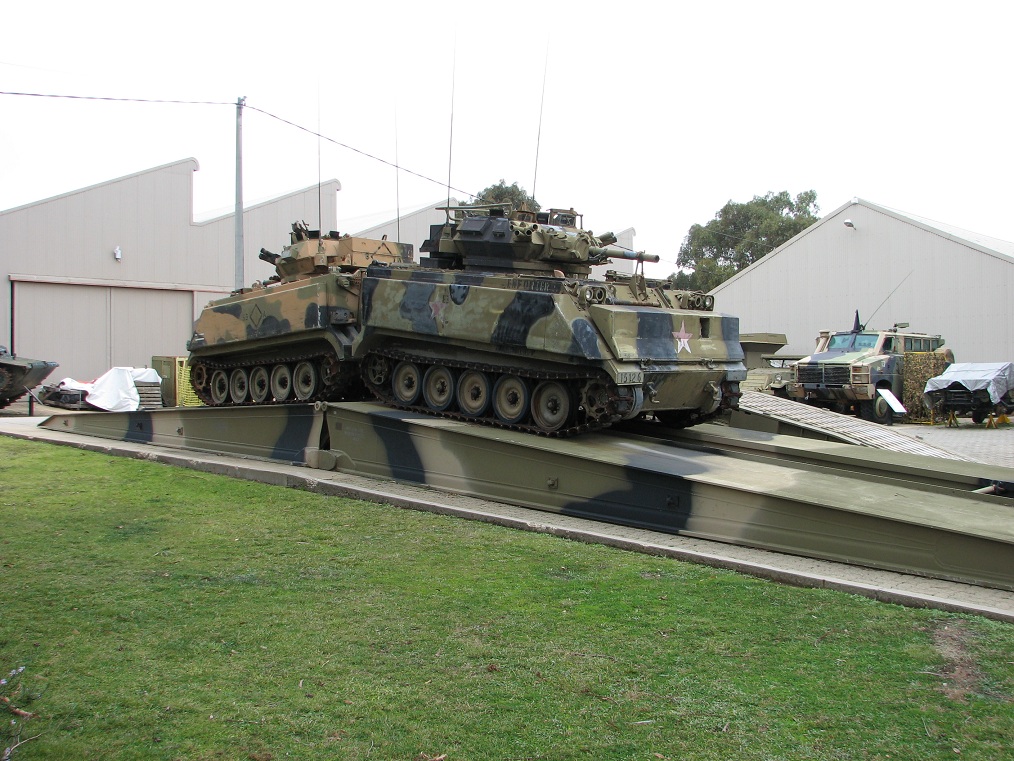 There are a number of FSV/MRVs on display, and a couple of Centurions. Obviously the more modern vehicles are in better nick. The most modern are the Leopards which were only recently withdrawn from service with the introduction of Abrams. 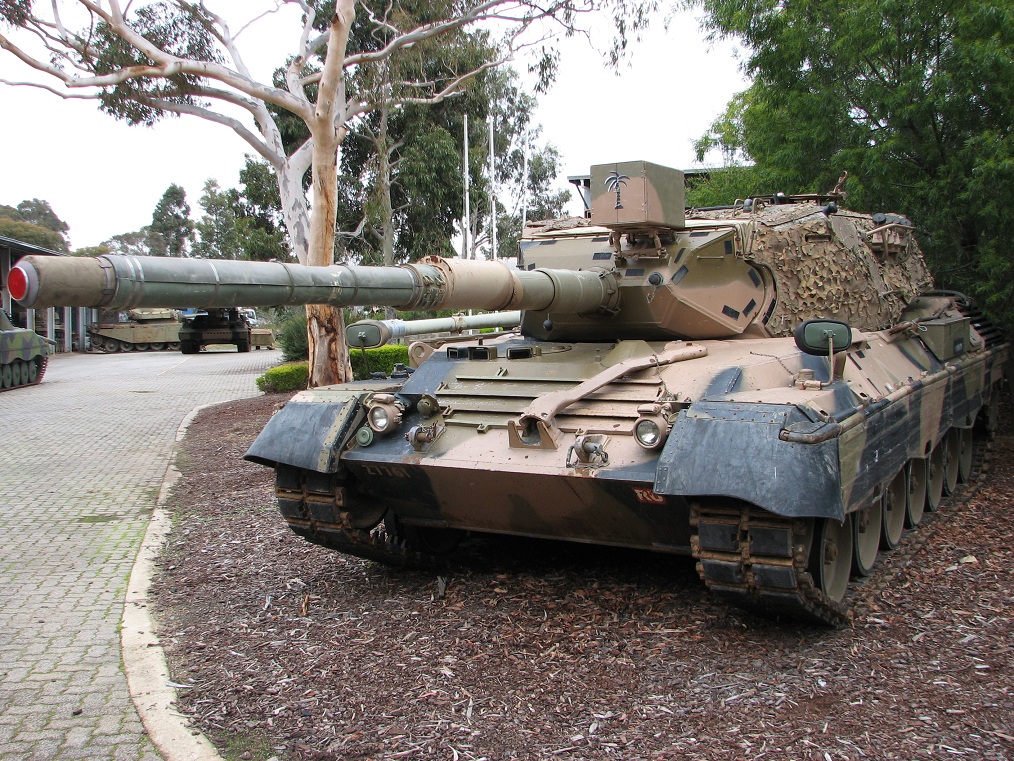 Given they’ve not had time to rust away yet, the Leos seem to still run. At least, one of the locals started one up for us. An AVLB, ARV and two gun tanks, one with a mineplough attached, are all on display. 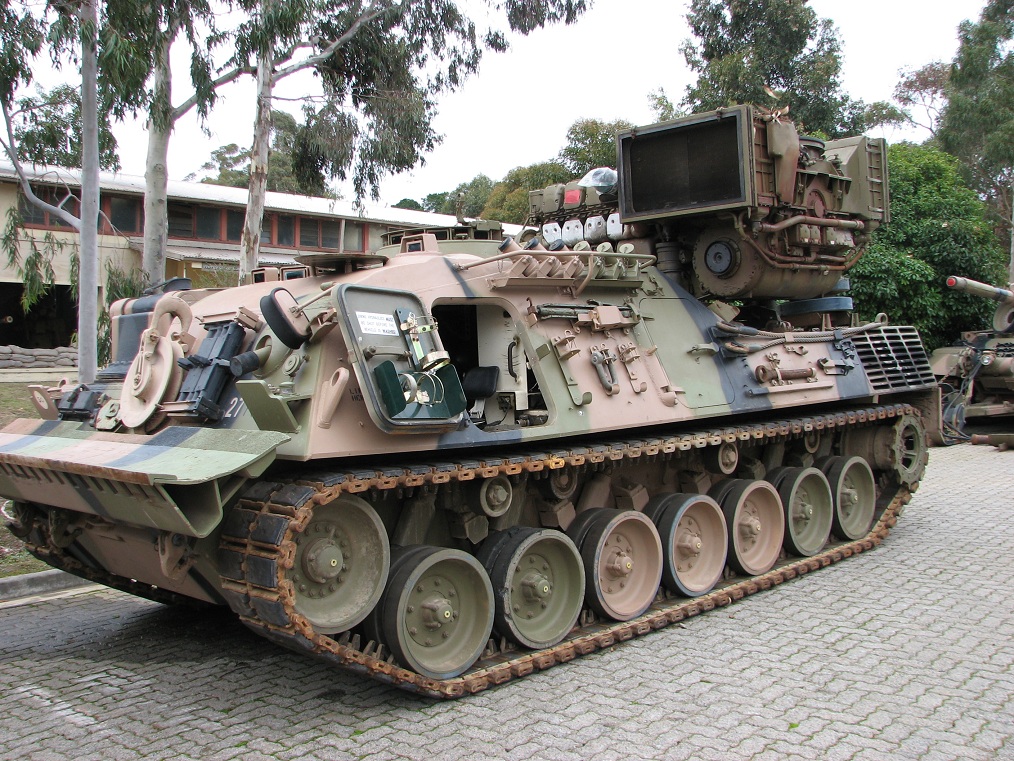 An unwelcoming large hangar at the North end contains a few more exhibits. I was looking at it for a while before deciding that I was authorized to go inside. Just as well I did, it’s quite a large amount of floorspace with a few additional displays. 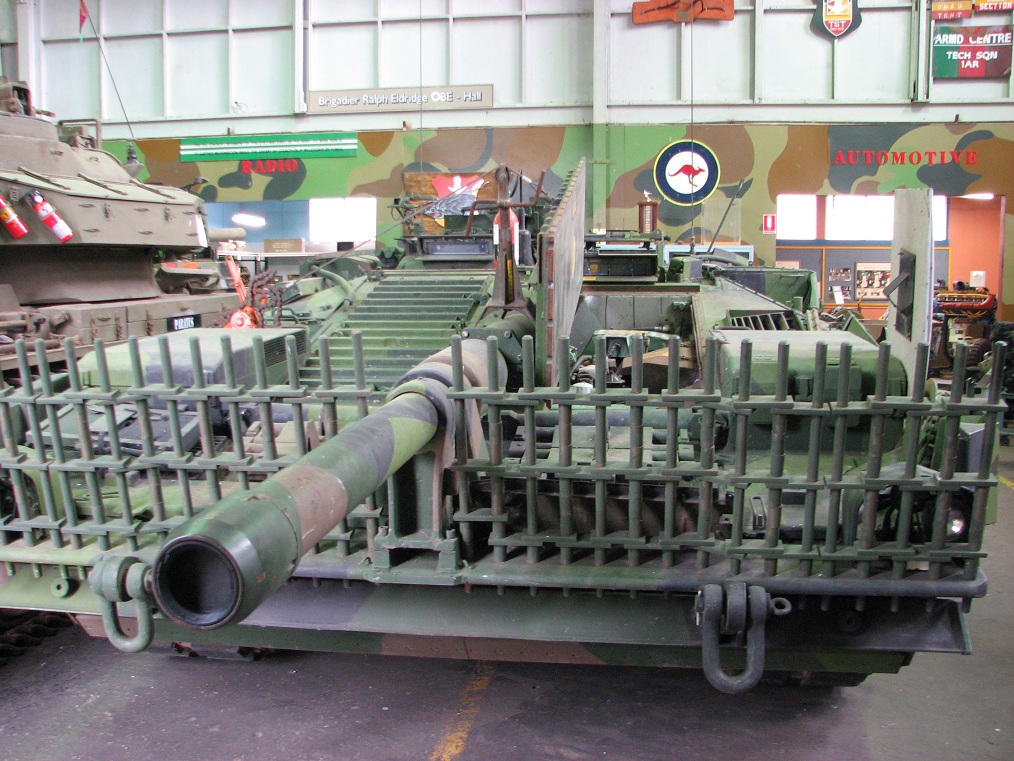 The IKV in the background of the Leopard photo is not the only vehicle to have made the journey from Scandanavia. This Strv-103 also has made it here. For such a small country relatively speaking, Sweden’s tanks certainly seem to get around the musea. 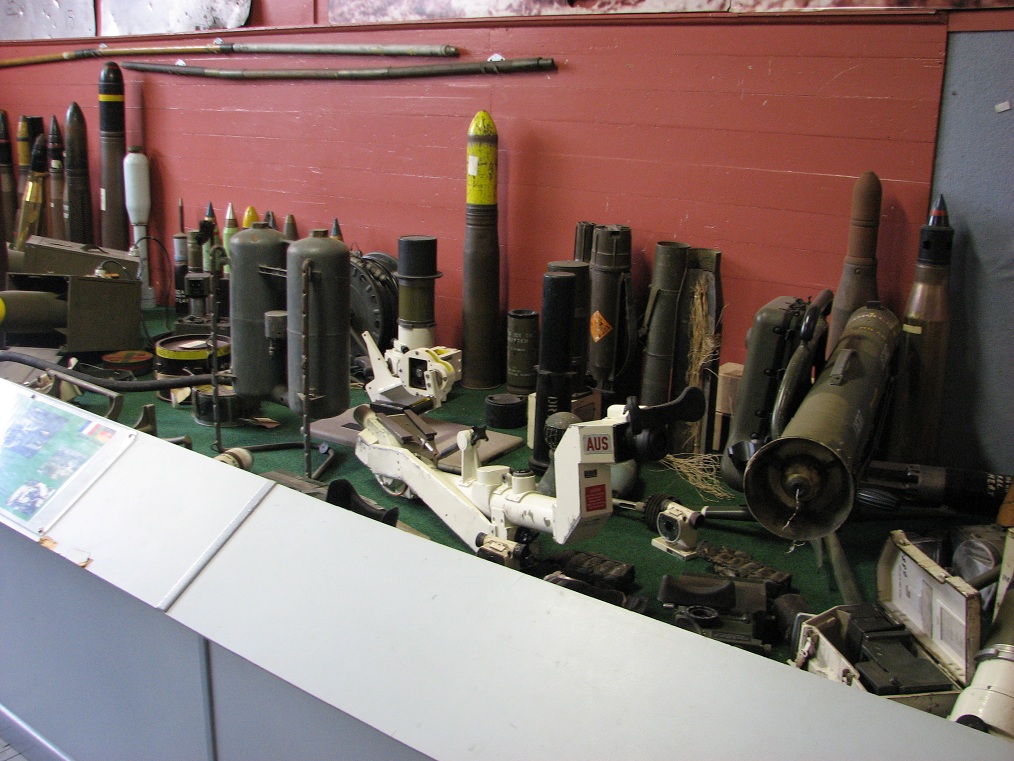 Around the back are a number of small rooms, which are themed, such as the ammunition display above, or one room filled with nothing but commo equipment. Unfortunately, there’s not much to tell you what it is you’re looking at. 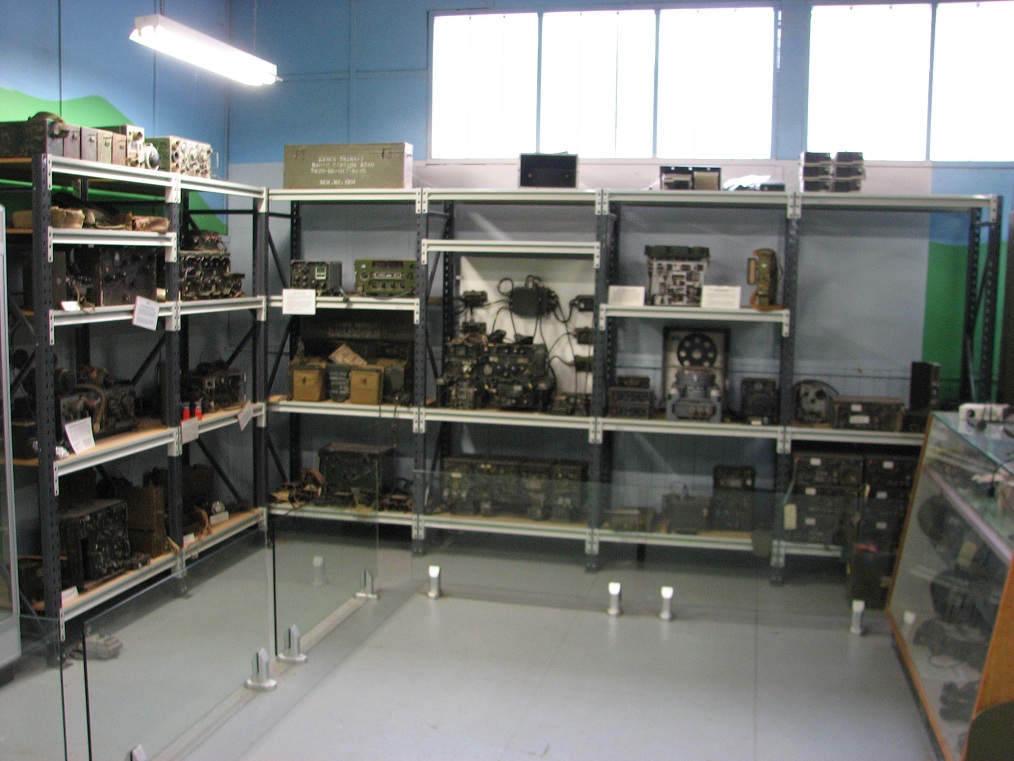 The displays are obviously more than just an afterthought, but it is abit of a half-job. I did like the Ferret cutaway though, used originally as a training aid. Not quite Bovvie's Cut-in-Half Centurion, but still interesting. 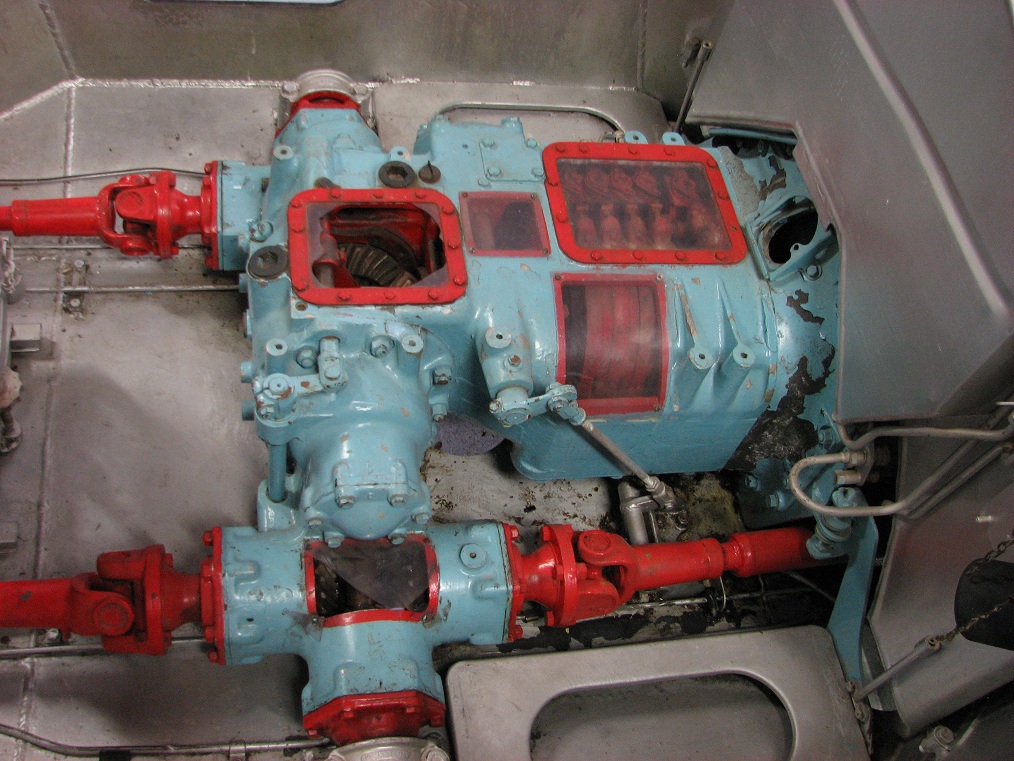 Once your’re out of there, you cycle through a pre-fab portacabin sort of thing, which functions as the gift shop. Small, but reasonably well stocked. Then say goodbye to Joe, out you go, and don’t forget to hand back your visitor’s badge at the gate.

There is one notable exception to the ‘no work being done to the vehicles’ rule, and in fairness, I can’t think of a better one. Their AC1 had the engine pack pulled out for repair work when I visited. 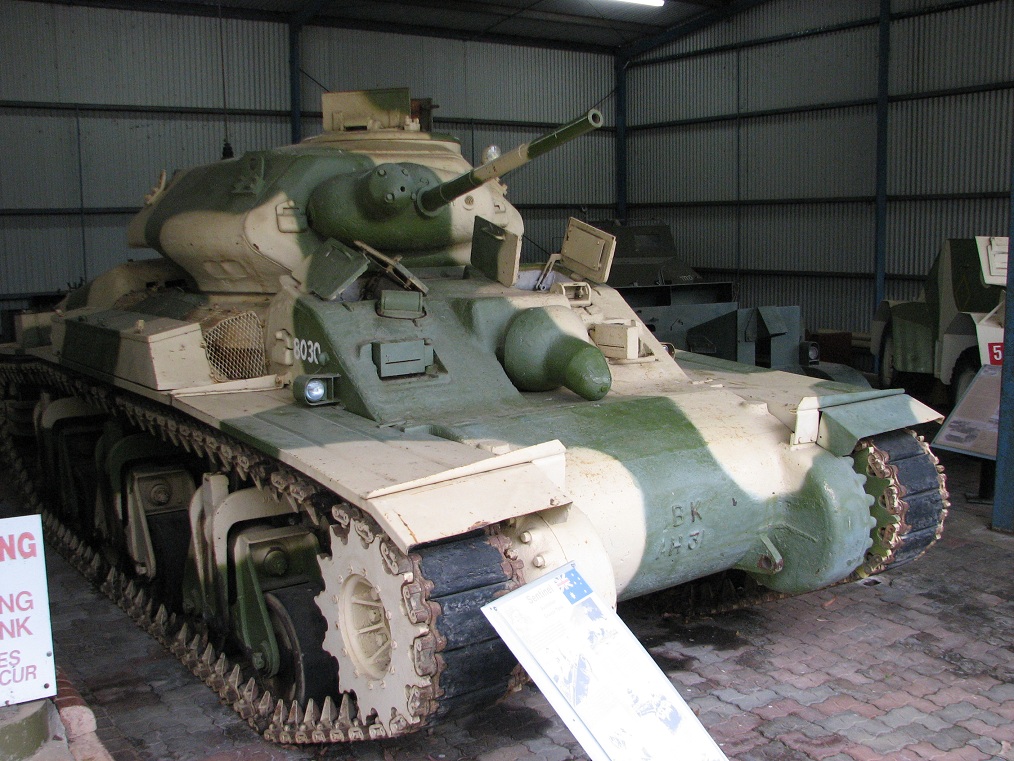 That knocks three of the four off my checklist. I still have to see the one in Canberra...

I’m really not sure what to make of Pucka. That it’s still a going concern strikes me almost as being the result of a labour of love from Joe and the lads who went before him. The collection has so much more potential than is currently being realized. On the other hand, where is anyone else within a few week’s drive or swim going to be able to see a collection of this significance, even if it’s rusty?

Again, check the museum website, or better yet, call, before visiting. It’s a long way from here to there, and it would be a shame if you got the dates wrong! 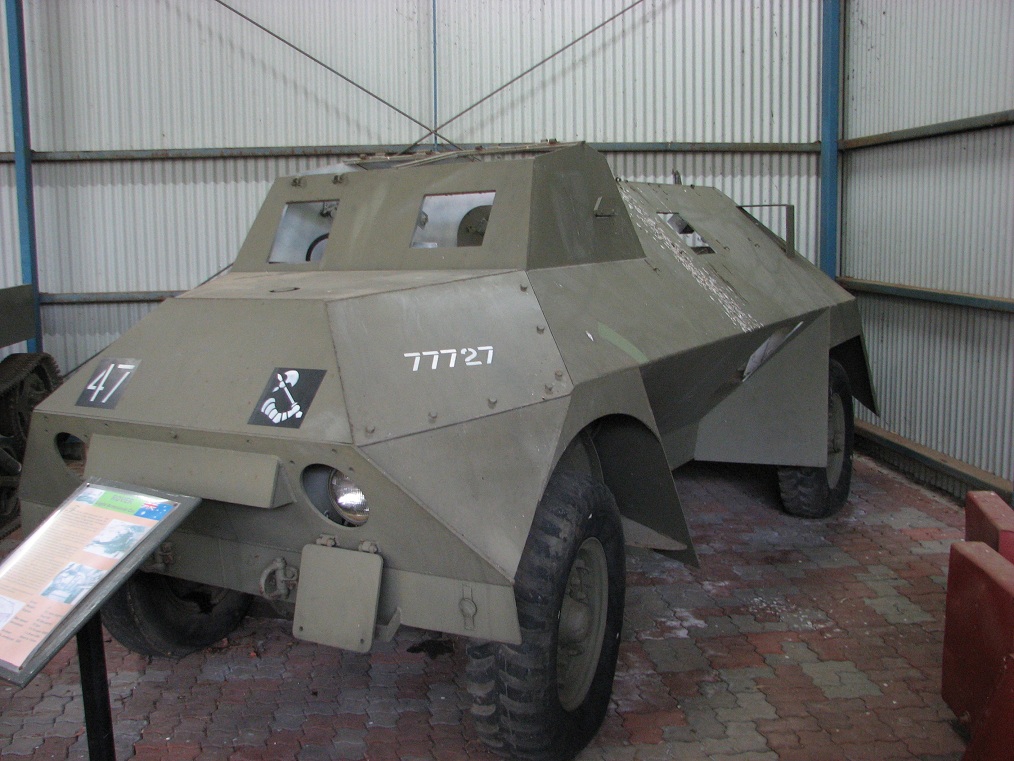