Chances are that a lot of you won’t have heard of Overloon before the announcement of the MVP event, or the fact that I mentioned it in my Arnhem article. 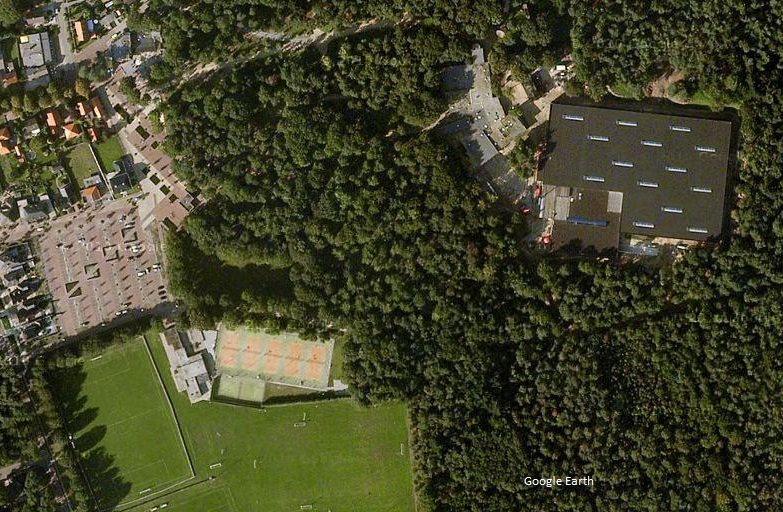 This little town in SouthEastern Netherlands was the site of the largest tank battle fought on Dutch soil, sixty-seven years ago this week . The US 7th Armored had a crack at the attack, and ended up having to be replaced in the line by the British 3rd ID and 11th Armoured who themselves got rather beat up before carrying the day. 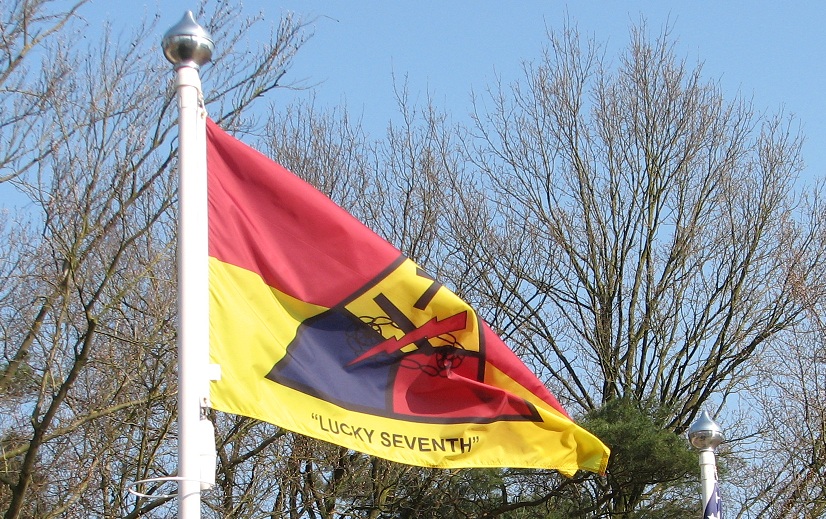 A museum was originally built at the location in 1946, then it was decided to make it the National War and Resistance Museum. At the turn of the century the facility was greatly expanded, with lots of the outdoor exhibits moved indoors, and then a large private collection was added, requiring even more construction. Nowadays the museum is actually two musea co-located: The War and Resistance Museum and the Marshall Museum. The entire grounds is named “Liberty Park.” It’s a touch over two hours’ drive from Amsterdam, and an hour and a half or so from Cologne. Motorways will get you to within ten kilometers, then a quiet drive through the suburbs.

One parks a few hundred yards from the museum entrance, just wander up the trail. Feel free to meander a little bit, there are one or two oddities scattered around the park, including this Bailey Bridge, one of the few around which is fully constructed to take the weight of a tank, and a number of monuments and other artwork. 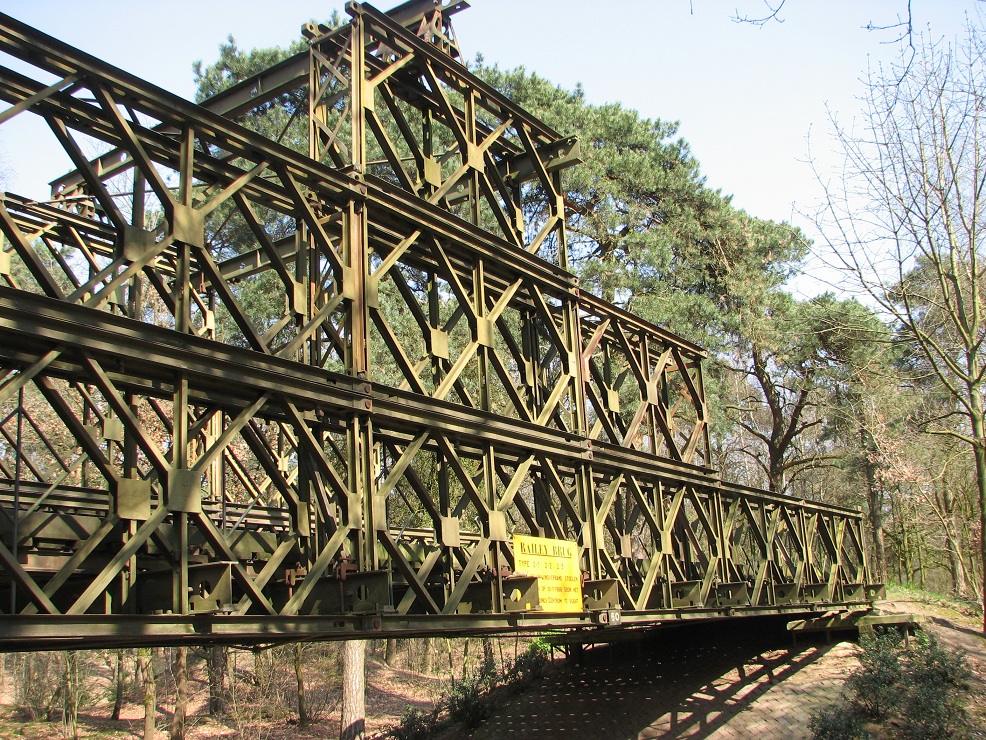 Exactly why an IS-2 is to be found by the museum entrance is not explained, but it is there none-the-less. The museum entrance is visible in the background, and is an excellent example of architectural subtlety. There is little clue as to the sheer size of the facility as you approach. 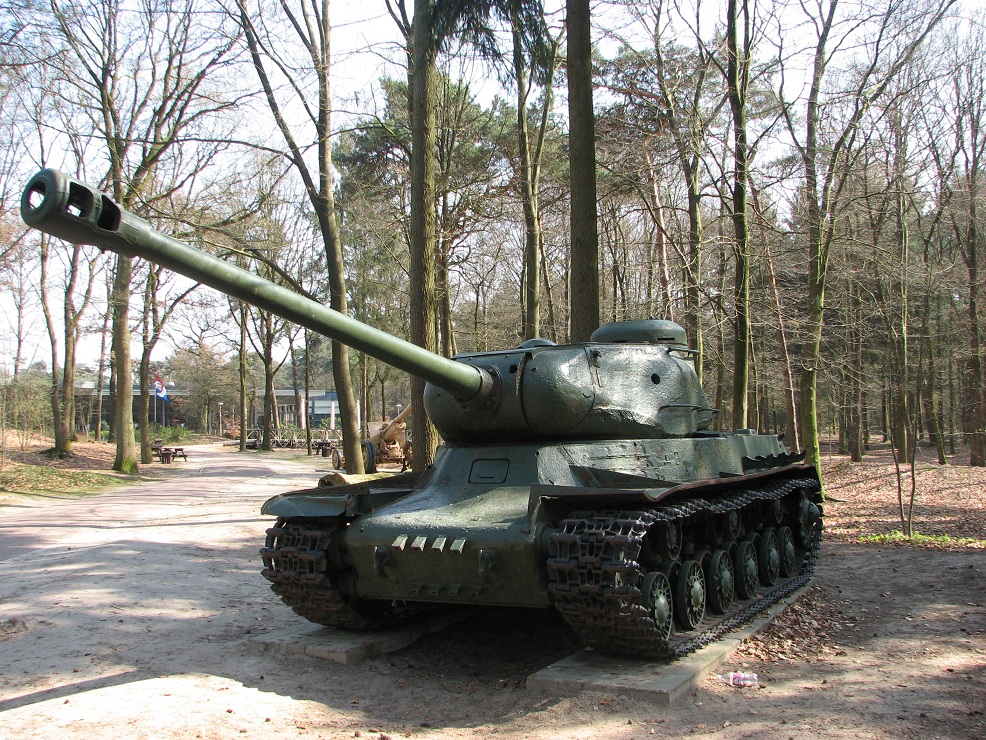 Upon entering and paying the 8Euro fee, you are faced with a choice of going straight ahead to a jeep (well, command car), or look to your left at a Panther, and a number of other tanks behind it. Gee, which way to go? Panther isn’t in the best possible condition, sitting as it is without tracks for now. Actually, pretty much none of the tanks behind it are in great shape, given that the reason they were left in Overloon to begin with was that they were knocked out. The M4 in the back is a particular case in point, with the turret knocked off its race as it is. 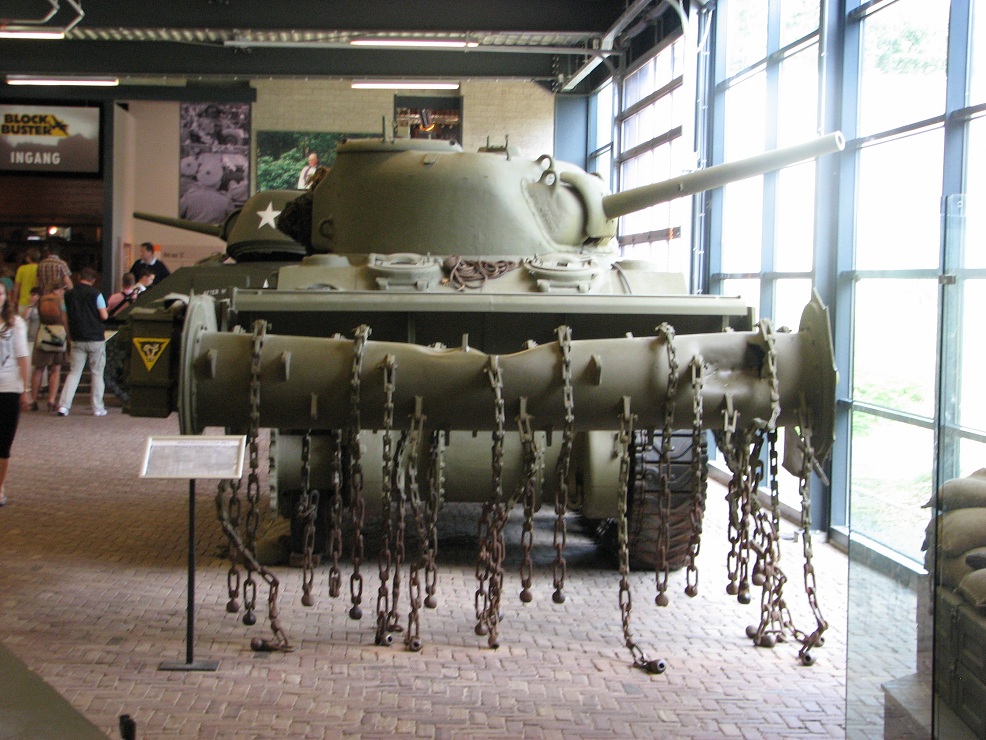 Since you’re heading that way anyway, you will likely continue up the steps into a display area. This gives a general timeline of the Dutch history during WWII with some focus on the Dutch Resistance. Mainly documents and diagrams. Not uninteresting mind, unless you’ve a twelve-year-old boy wondering where all the tanks are. If you go out the back way, you end up crossing an open courtyard into what almost looks like an ammunition bunker. It’s a semi-artificial subterranean exhibit focusing on the holocaust.

So far, everything you see is neatly and well presented, but you can’t help feeling like you might have been a bit misled. Wander back from the holocaust exhibit through the resistance displays and past the tanks, you see that there’s a doorway behind that command car, with “Marshall Hall” written on it. Not expecting much, you wander in. 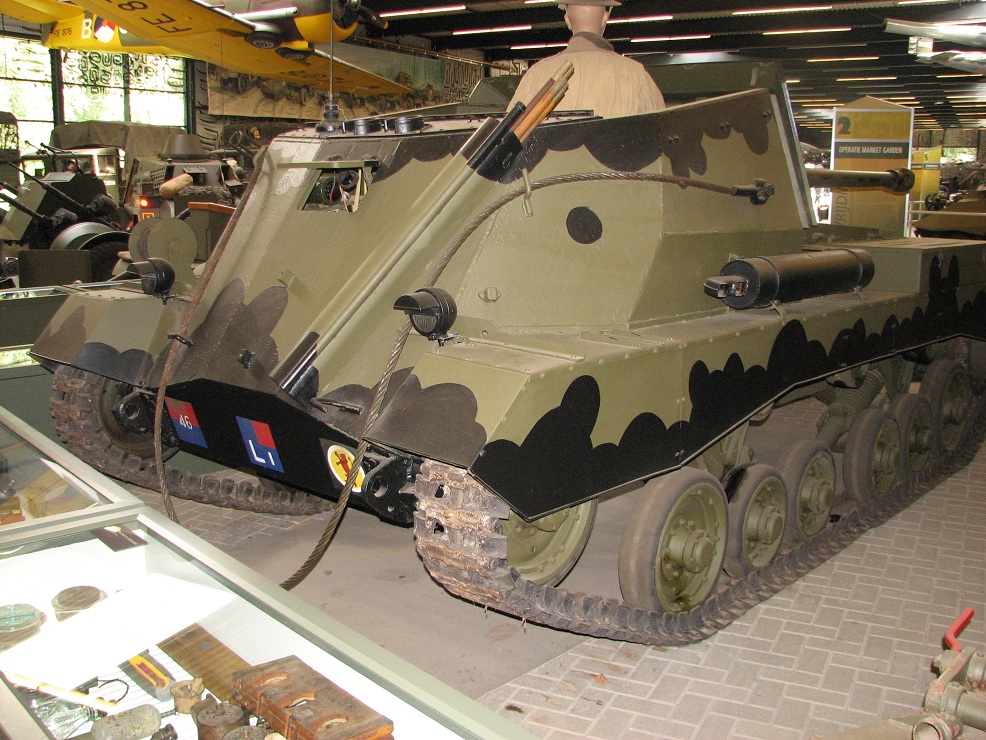 Go back up to the satellite photo again. See the size of the football pitch on the bottom left? Compare to the large rectangular building which is Marshall Hall on the right. This is one very large room with a lot of equipment in it, and even the hall itself isn’t the whole story.

One of the first things you see is a D-Day diorama complete with a Spitfire (MkXIV?) hanging from the ceiling. 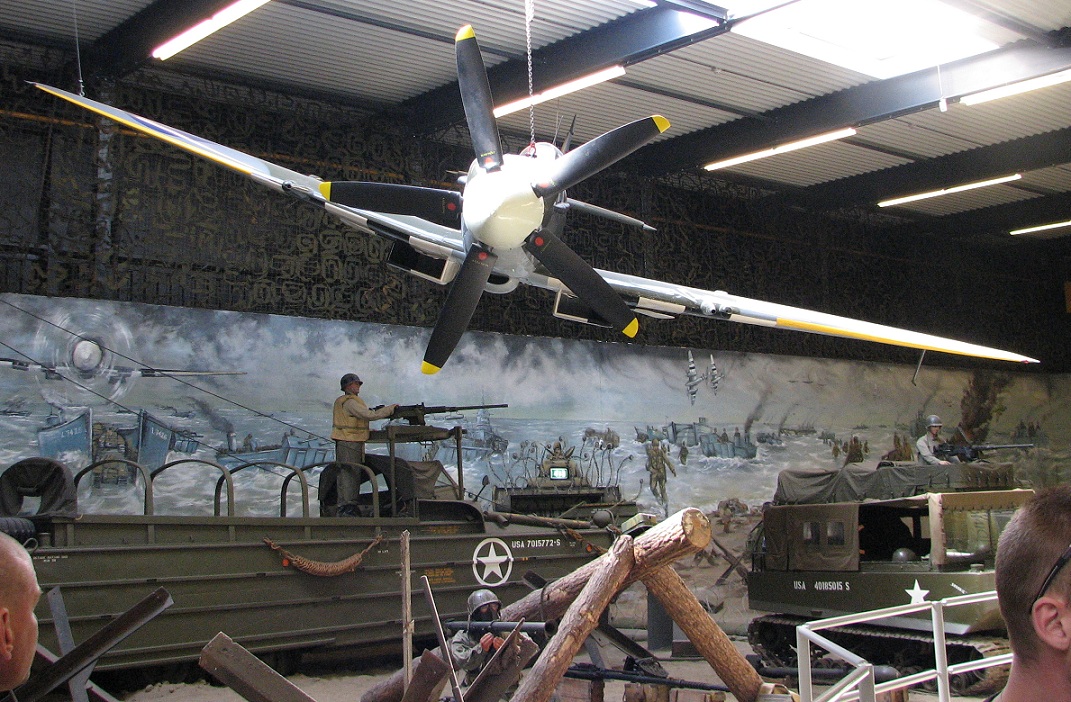 Face it, not many tank musea have large rooms complete with hanging aircraft for atmosphere. If you want even more atmosphere, go ahead and push the Big Red Button on the barrier, you get battlefield noises as a reward. This is a bigger facility than one might think at first glance.

The mix, as you can see, is pretty varied. 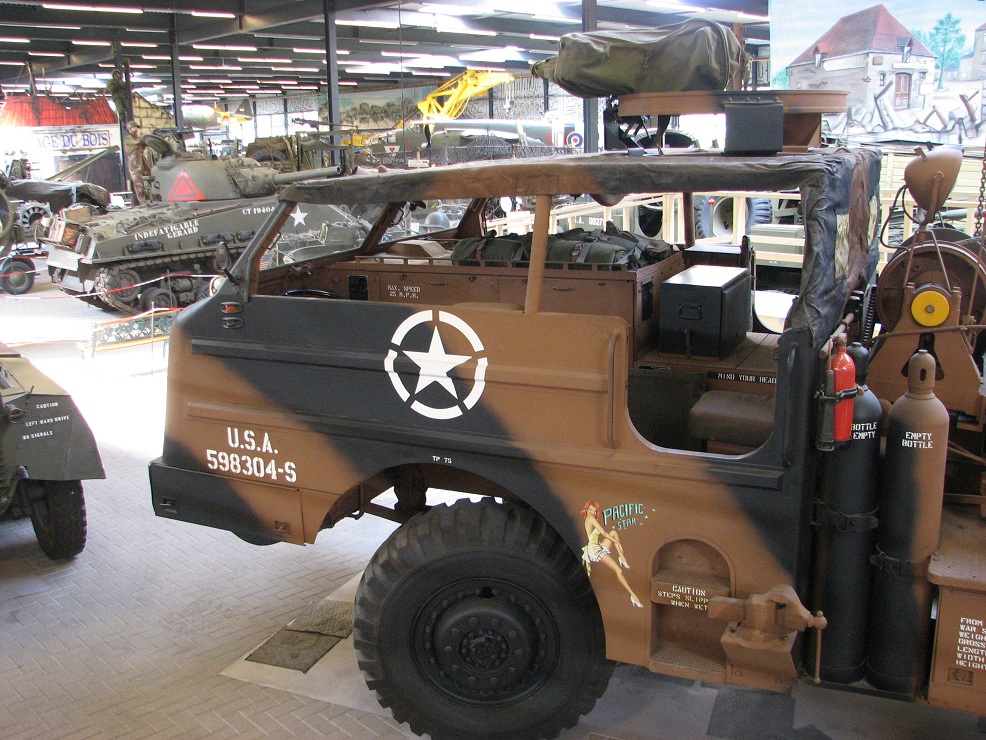 Softskins, aircraft, tanks, cranes, even a field shower, all in the same picture, often with dioramas to set the scene. There’s even a (small) submarine out of shot to the left.

One of the highlights is the only BARC I’ve seen so far. This thing has wheels some ten feet in diameter. I have no idea how one would change out a flat tyre without a crane. 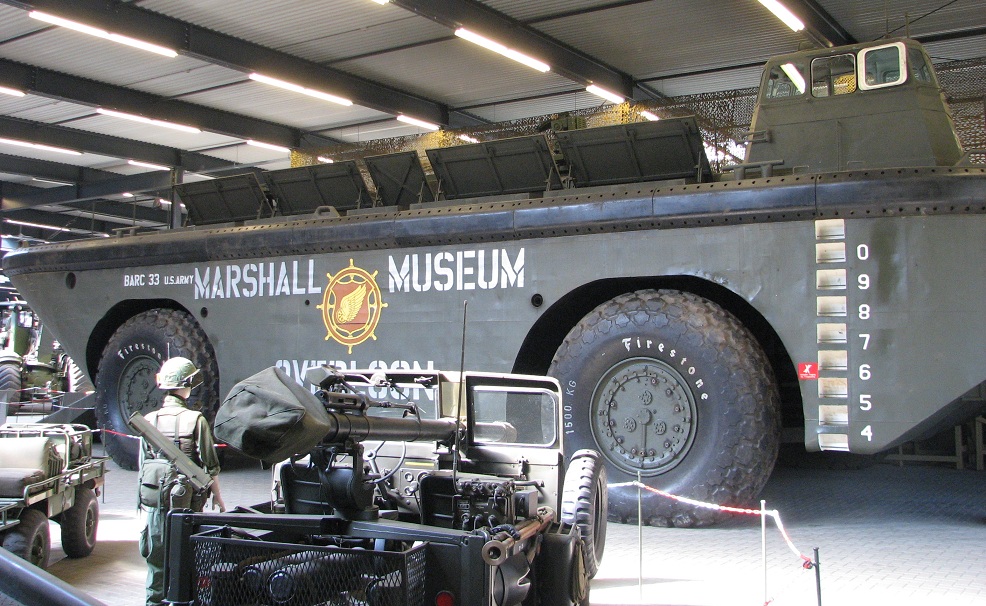 When you enter the hall, if you keep to the right, you will see the cold war selection. Many of the vehicles are former Dutch Army which have been retired from service. 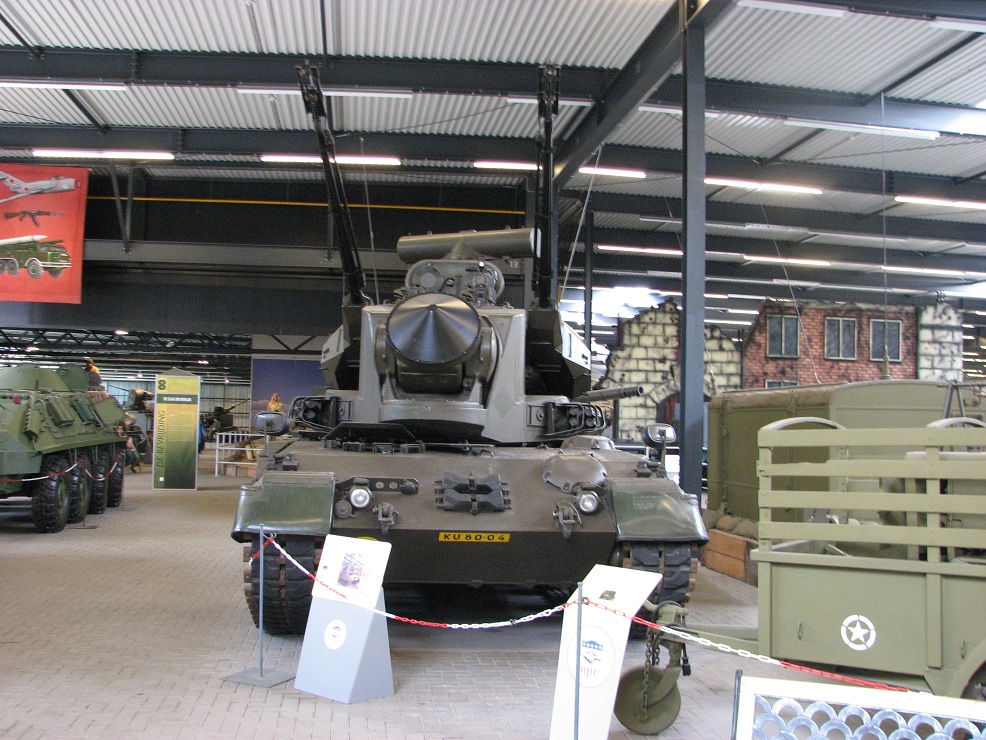 Others, not so much. 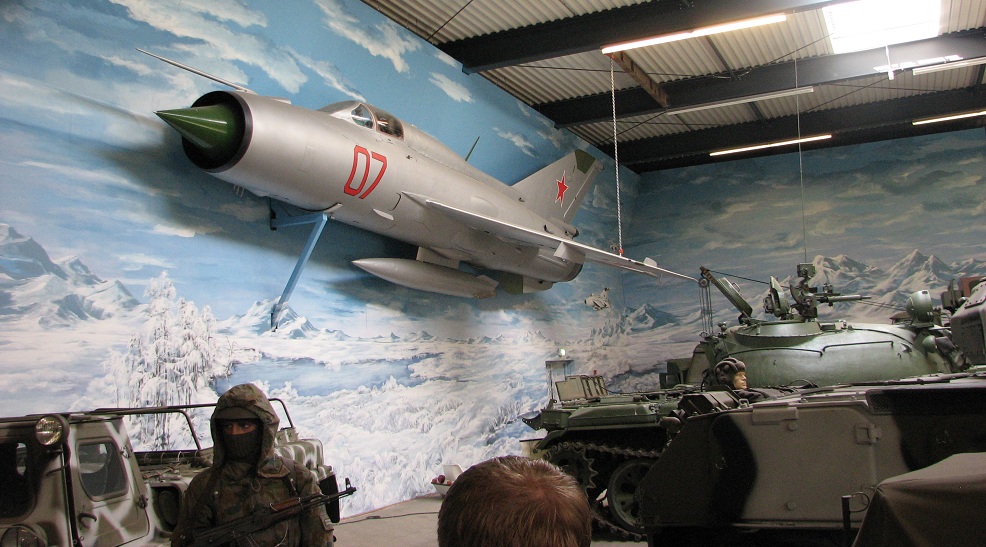 The main theme of the collection, however, is the Red Ball Express. There are all sorts of logistical vehicles I never knew existed, often set up in dioramas and loaded to capacity. 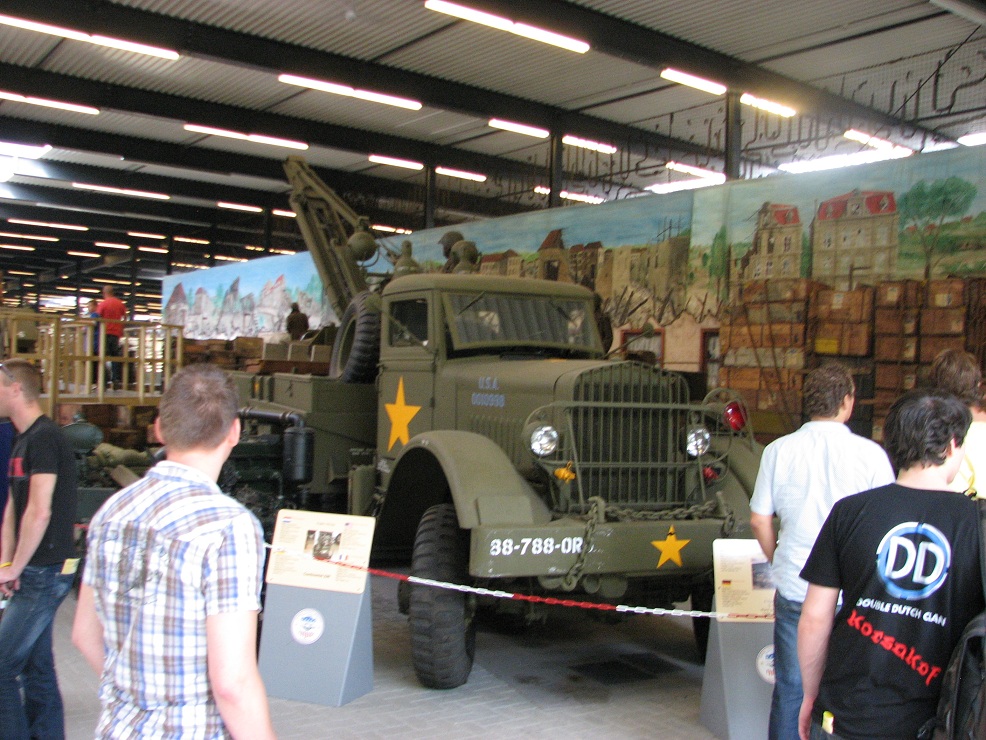 The raised platform to the left allows one to look from a slight elevation upon all the trucks. It should be noted that the two Dragon Wagons in the collection, one softskin, one hard, are in apparently excellent condition. The hardskin in particular is quite rare. 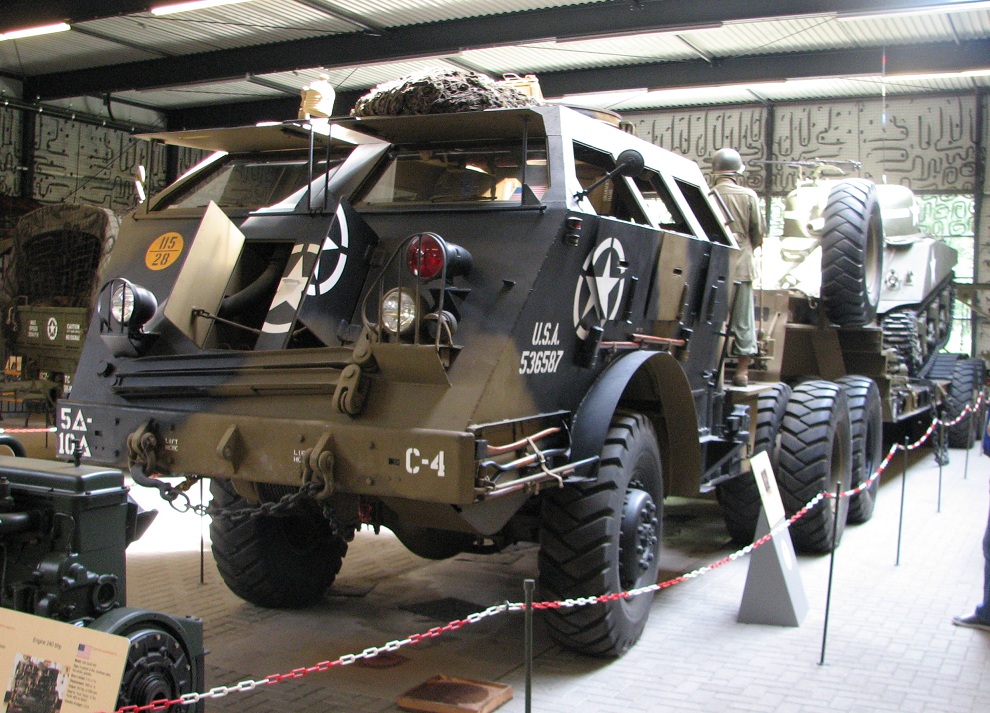 A few of the other vehicles also have steps nearby to allow an elevated view into hatches, and others simply have the various access ports left open so that one may see the internal components.

In terms of density, the museum is near perfect. There is enough space between the exhibits that you can actually see all angles for most of them, even if from some only from a distance as groups of vehicles are cordoned off. And, better yet, the facility is very well lit. Large placards for the majority of the exhibits give the basic stats in four languages, though little, if anything, by way of background information. The only downside to the museum is that there is the logistics focus, so if you’re expecting a collection of tanks on a par with Bovington or Munster you will be disappointed. However, there’s enough to keep most people happy, from T-34 to Centurion and, frankly, the variety of combat service support vehicles is without peer.

The one last thing I’ll note is that when you exit the park to return to your vehicle, look to your right. You’ll see a small square with café and a few other shops. Off on the left of that square is a small model shop. It’s well worth a look inside.

I’m not into rating museums on a scale, but this one is well worth the visit. 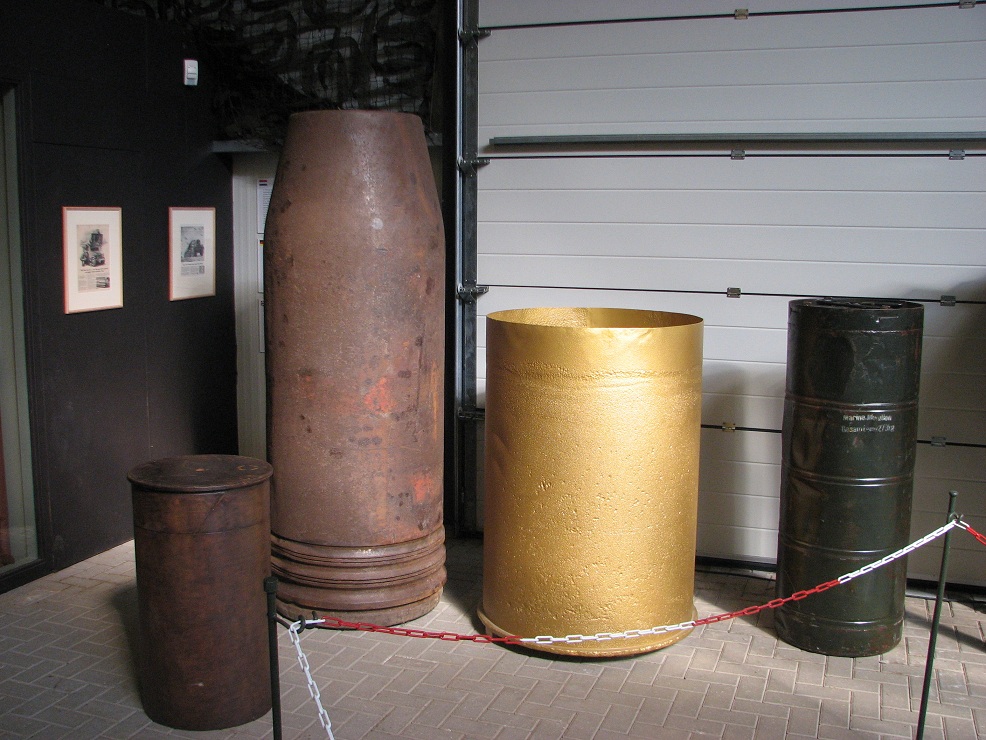