This museum does exactly what it says on the tin: It covers the Armed Forces, and it’s definitely central. It’s actually well within the city limits, a little North of the centre of town and easily accessible by either car (Parking may be an issue, but if you’re driving in Moscow, you’ve probably figured that out already) or public transport. As anyone who has been in Moscow more than three hours will have realised, the metro system is the way to get around if you can, and the CMAF is conveniently within a five minute walk of the system. Get off the train at the clean and modern Dostoyevskaya station, walk past the picture of an axe murder in progress (Something to do with Crime and Punishment, apparently), up the stairs, and you are face to face with the very impressive Russian Army Theatre. Walk past this structure, and soon you will see this slightly less architecturally interesting building. 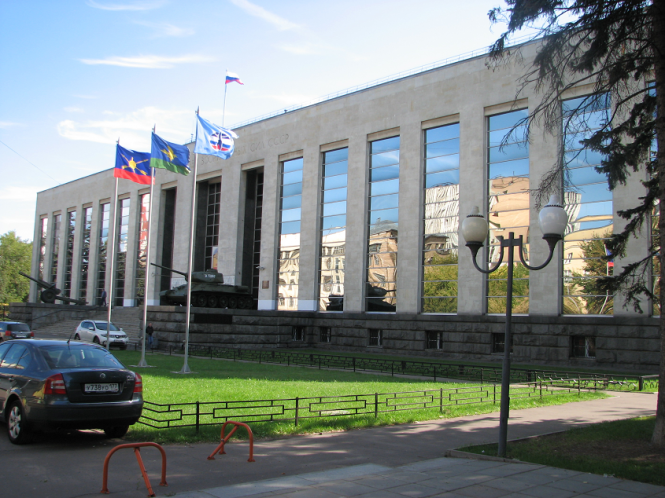 The Central Museum is housed in a purpose-built building constructed in the mid-1960s. The good news is that items which were known to be on the display list in 1965 are well catered for. The bad news is that as the years pass, and more things are added to the collection, they are pretty much just squeezed in as they can.

Admission fee is a very reasonable US $2.75 or so, but if you want to take photos (and you probably will), you’ll need to more than double it to a whopping $6.50. Paying this fee will give you a wrist-band that you have to wear: If you don’t, every time you try to take a picture, a dedicated and eager watchman/watchwoman will rush up to you. 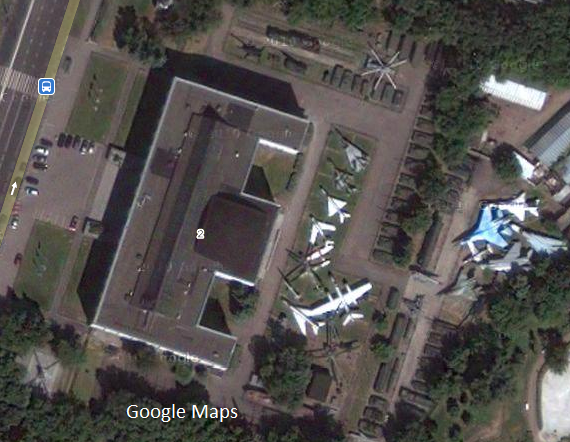 When you pass through the security checkpoint, you are confronted with the main hall. From there, you are not given any instruction on where to go, there is no obvious rhyme or reason behind the layout. Oldest exhibits, dating to the Revolution, are to your right.

The next thing you’ll notice is that all the exhibits are labeled in Russian only. Not that this is a bad thing in itself: After all, it is a Russian museum in Russia, but it does mean that as a tourist, you have generally no idea at all as to what it is you are looking at, except you might be able to interpret some designations from the Cyrillic. A Russian-speaking friend is helpful.

The ground floor actually doesn’t have a whole lot in it. The Revolution room is about 5m x 10m, and consists of one artillery piece, a few artifacts and uniforms, and a number of paintings. The Stalingrad room is about double that size, again with the odd artillery piece, a truck, and a large number of artifacts which would doubtless be of huge interest if you knew what it was you were looking at.

Things get a little more interesting when you climb the rather grand staircase, however. Of pride of place in the central upstairs room is the flag flown over the Reichstag. 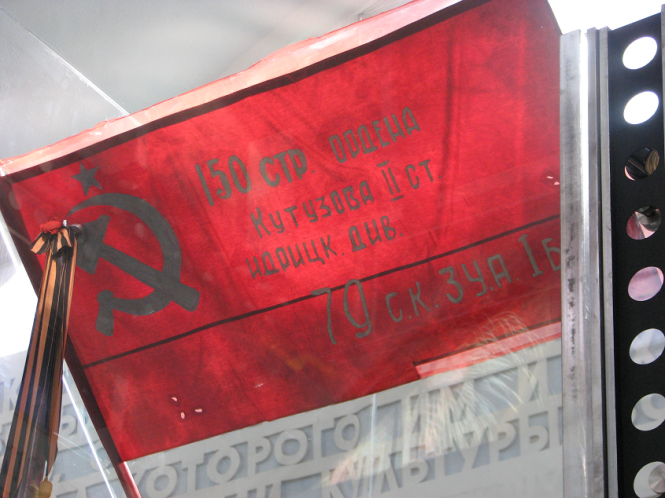 Surrounding it are the captured flags of German units, and hundreds of German medals. I hesitate to speculate as to what would be the market value of these items at militaria auctions. 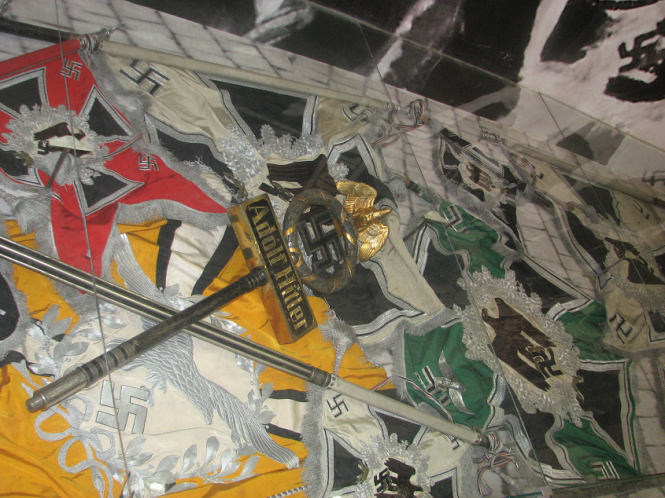 To add to it, they also have the Eagle which was knocked off the Reichstag, in this rather debased position on the floor: 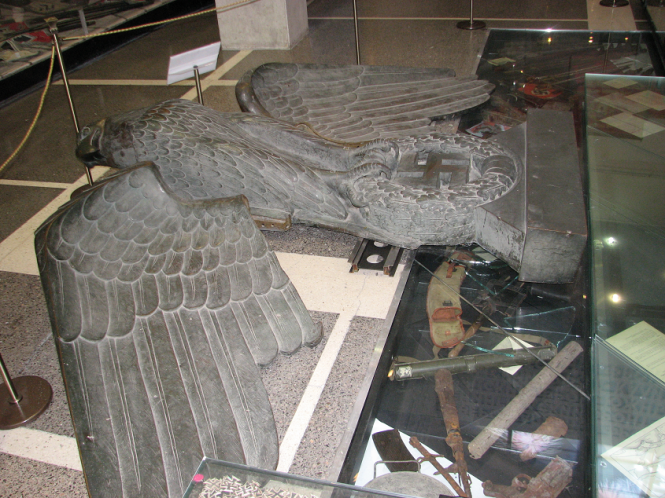 Once you’re done gawking at the evidence of the end of the Third Reich, you can proceed onto the ring of outer rooms. These rooms are really more like long, segmented hallways, and again, there seems little continuity. You go from a WWII diorama of an anti-tank gun to the complete turret of a BMP-1 to a D-Day display. Each room will usually have one or two ‘large’ exhibits, a mannequin or two in uniform, and a number of photos, documents or other small artifacts in glass cabinets. 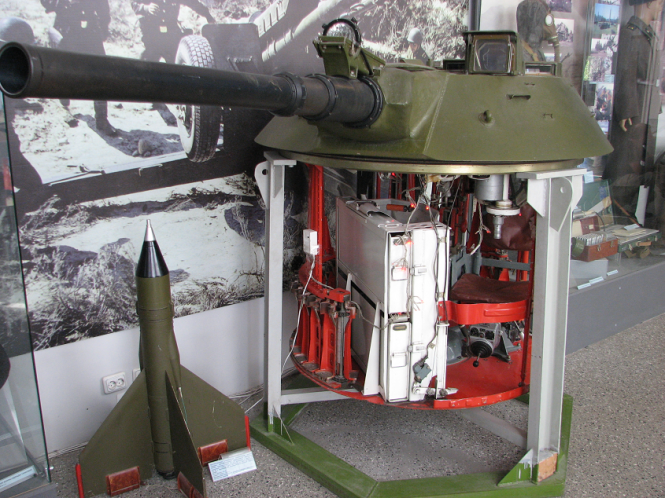 It seemed more that the purpose of the museum as it is organized was to just let the visitor know about the existence of the items or organisations referenced rather than actually provide any detailed historical information. The entire reference that I could see about the involvement of other allies in WWII was a small corner of one room, which had a jeep, a mannequin, and the beach assault scene from Saving Private Ryan on a loop on a small monitor. 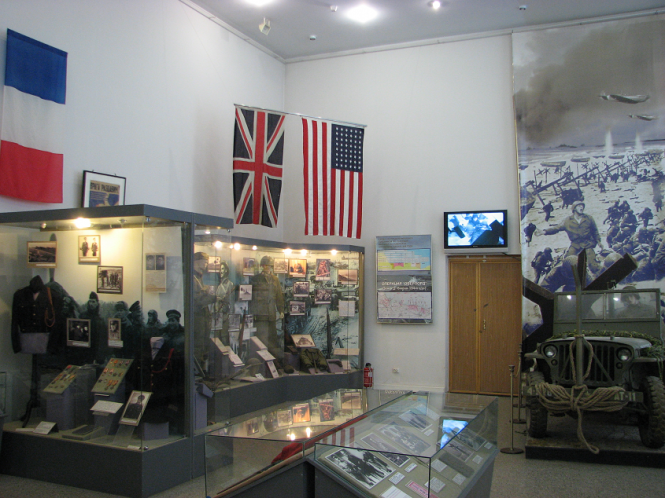 However, again, in fairness, this is the Russian Armed Forces museum, so one can’t blame them for not devoting much space to non-Russian items, especially as space is at a premium. They did, however, find space for the wreckage of Gary Powers’ U-2, although it only took up about 6’x10’. 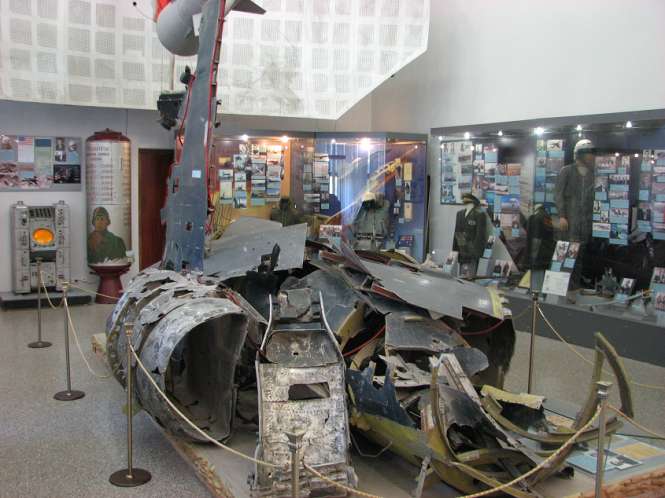 The museum is relatively up-to-date; they were able to squeeze in an 8’x4’ section for the conflict with Georgia.

The real reason for visiting this museum, however, comes when you go down the basement and out the back door, the outdoor exhibits. Right in your face is a Hind A. 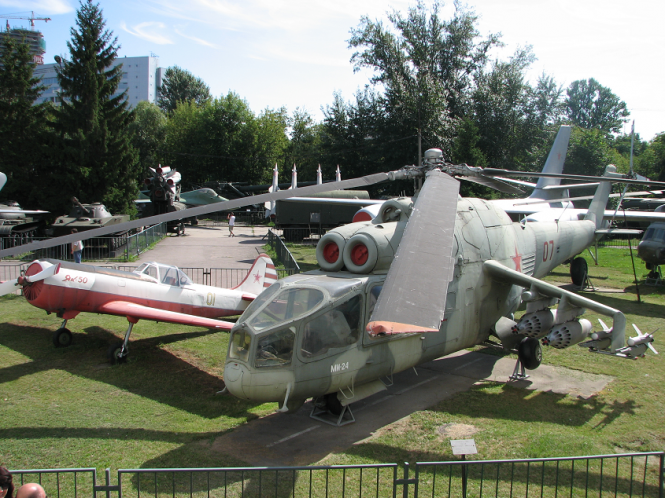 This is a rather crowded collection of aircraft, artillery, vehicles, and even a patrol boat, but does have a number of interesting vehicles on display. Most notably, they poached the KV-2 from Kubinka, itself the only KV-2 still around, as far as I am aware. 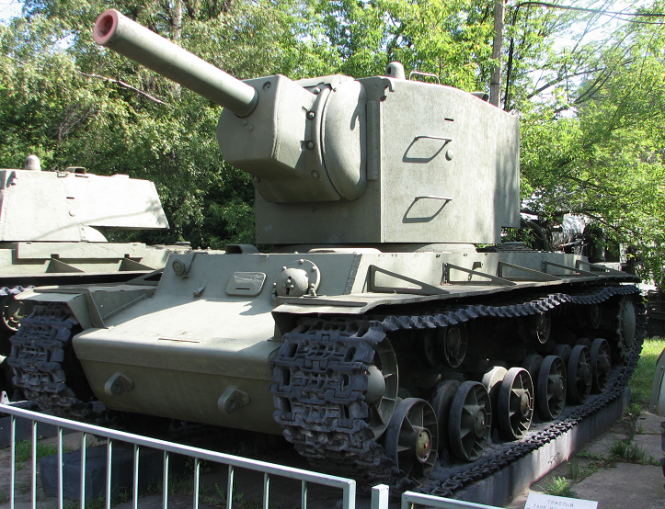 The downside is that the vehicles are pretty well crowded together, and the ability to see the sides or rear of vehicles is limited due to the areas being fenced off. For the enthusiast or the technically inclined who want to see some of the technical details this is a bit of a shame, though it seems to be par for the course for Russian musea. 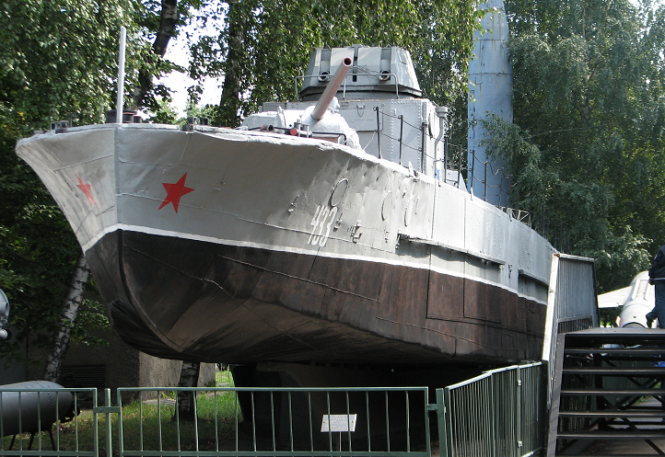 A couple of other military musea in cities come to mind as being better than CMAF. The timescale covered is less than a century, and it is already filled so that I am unable to comprehend how they will cover future expansion. What is covered appears to be covered in limited detail. On the plus side, however, it is extremely easy to get to, and can be made a simple part of a normal vacation to Moscow. It also provides a reasonable overview to at least sate the curious, if not the hard-core enthusiast, and family members dragged out on the expedition won’t feel overly bored. And, of course, if you want to see a KV-2, or a T-38 with 20mm cannon, it’s your only option. It does have a good selection of aircraft in the back yard, mind, so Air Force enthusiasts will particularly appreciate it. 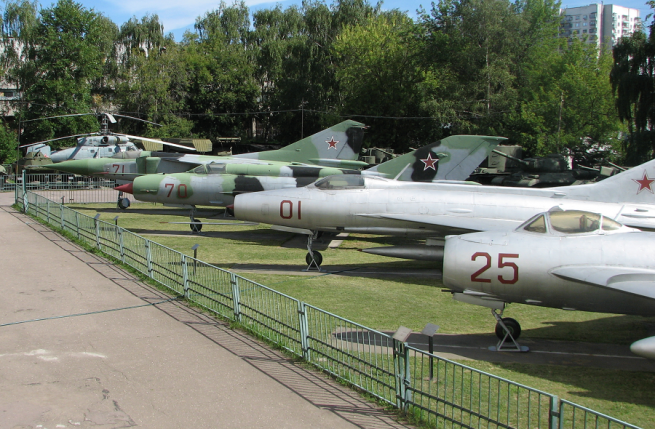 It’s cheap to get in, and you can see it in less than three hours. I can’t really envision going to Moscow and not dropping by to visit, it just seems that considering the rich and proud military history the Soviet/Russian armed forces have, I was, somehow, expecting something more.