There seems to have been a pulse of investment in North America’s military museum infrastructure recently, and the Canadian War Museum is no exception. Their appealing new facility opened up barely seven years ago.

Being pretty close to the centre of Ottawa, and on the edge of one of the main roads, I can’t imagine that it would be hard for the eco-conscious to get there by public transport. I, however, being a heartless person who doesn’t care for the environment at all, drove to the museum. Parking options seem limited to the indoor facility which is paid for by the hour. Of course, in cold weather, that’s quite convenient. Walk over from your car and up to the main entrance hall, a very spacious area. 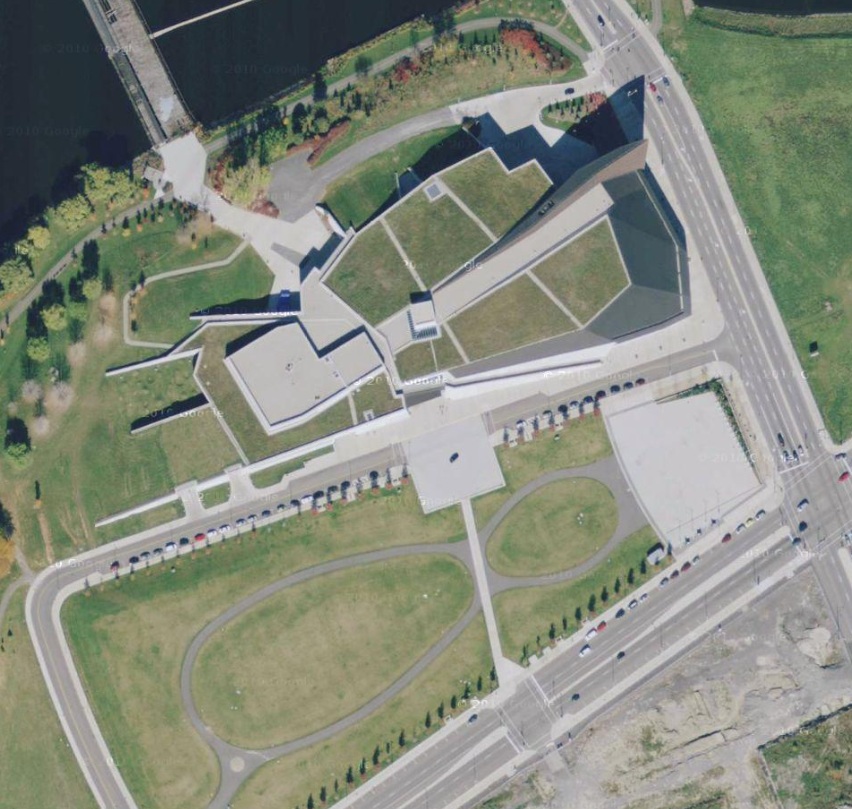 If you’re there as, effectively, individual attendees, you can pay your admission there. Arranged groups, however, go around the corner to the group entrance (which is at ground level at the front of the building) and check in (and pay) there. Took a while to get sorted out, they apparently had just upgraded their system and hadn’t sorted out the quirks yet. The default language of the staff seems to be French, by the way, but everyone speaks English. I suspect bi-linguality is a requirement of employ. 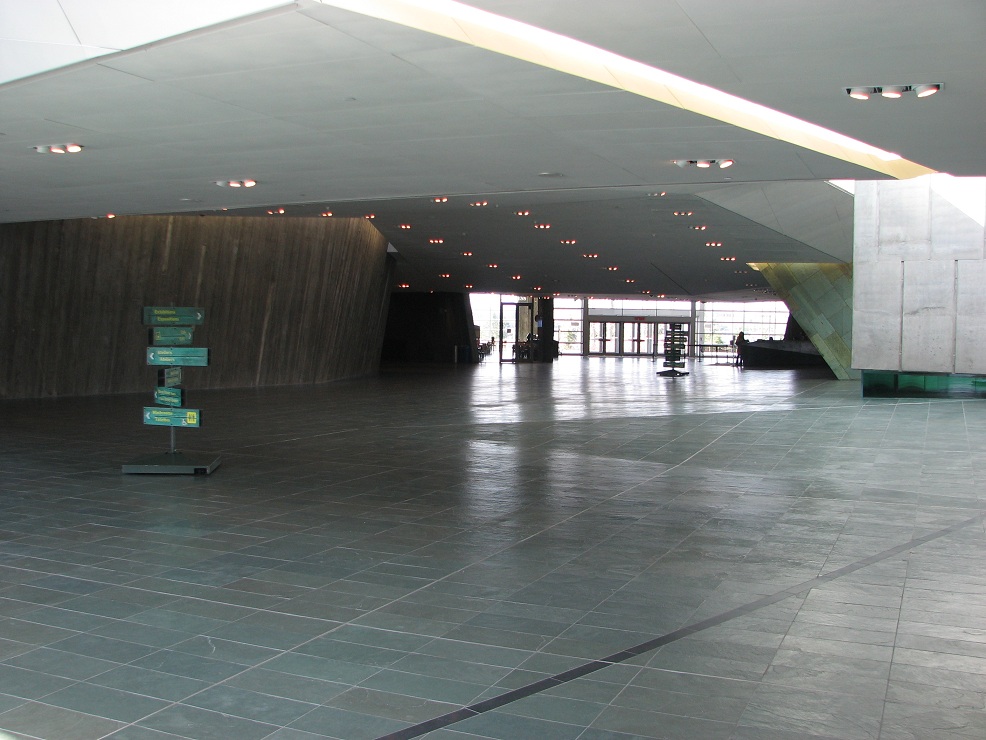 The West side of the building is primarily office space, though the canteen is there as well. The exhibition space is in the East side, there are three main areas: The LeBreton gallery, the main exhibition space, and the special exhibition space. There is no specific area to check out first. The museum was kind enough to provide us a tour guide with a focus on armour, so we went to the tanks first! 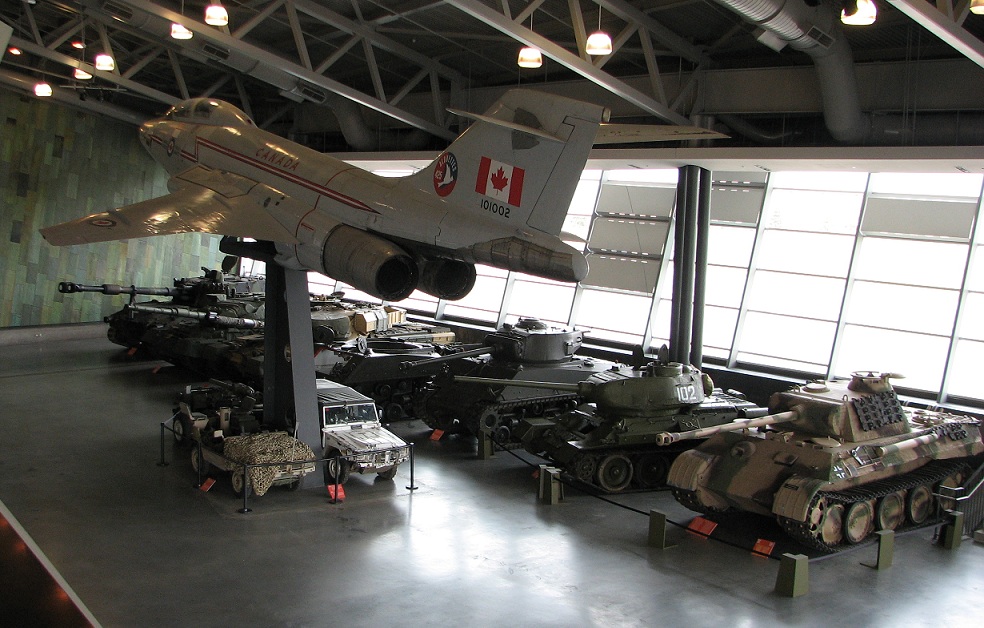 It’s a nice big hall with lots of room for stuff. I didn’t even notice the CF-101 for a while as I was looking at all the ground equipment. The large empty space in the middle can be used for functions if you have a mind to have one there. However, it comes at some costs. 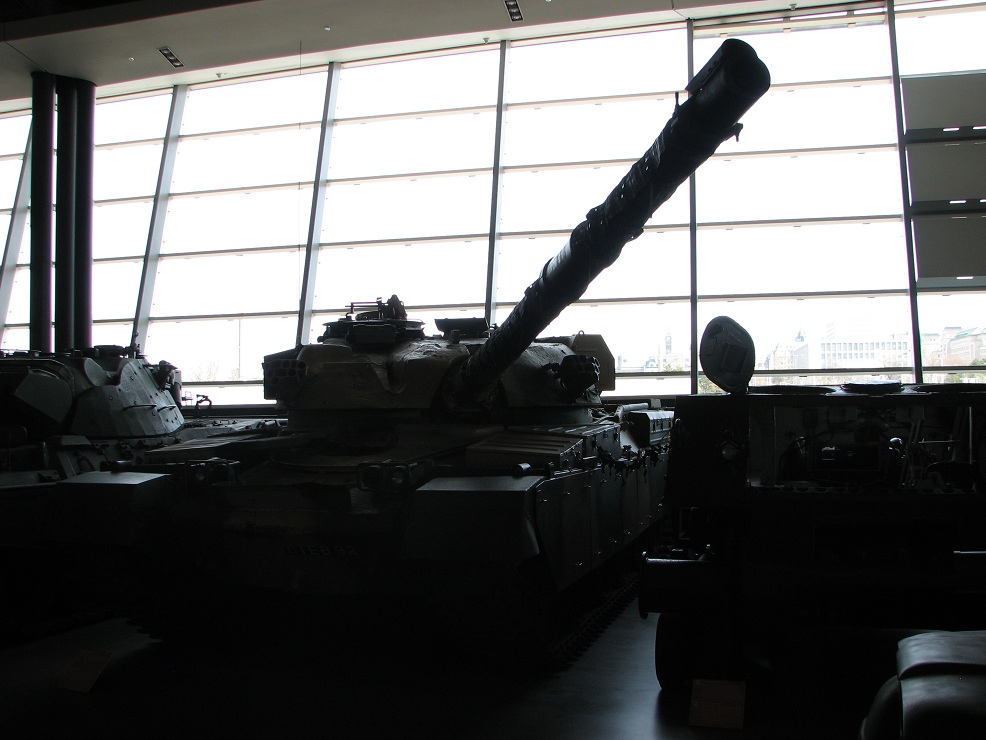 The first is that the equipment is all backlit. You try to take a photo of it on a bright day, and you’ll get nothing but window, and a tank-shaped silhouette. I’m sure better photographers than I can solve this problem, but for the average guy… Certainly it means that the rest of the hall is well lit, and cheaply so, but it is a bit of an annoyance since the ‘centerpiece’ pieces are all against the window.

The other is that, being against the wall, they’re all rather close together, and you have limited access to them. Ropes and chains keep you from the back of some vehicles, other vehicles are just so close together that you couldn’t get between them even without the rope. I am not a fan of collections where you can’t really see the vehicle, especially if it’s a rare one that you don’t often get a chance to see. The main pride of the collection right now appears to be a Panther, but personally I was most interested to see the Jagdpanzer Lange I had been told about. 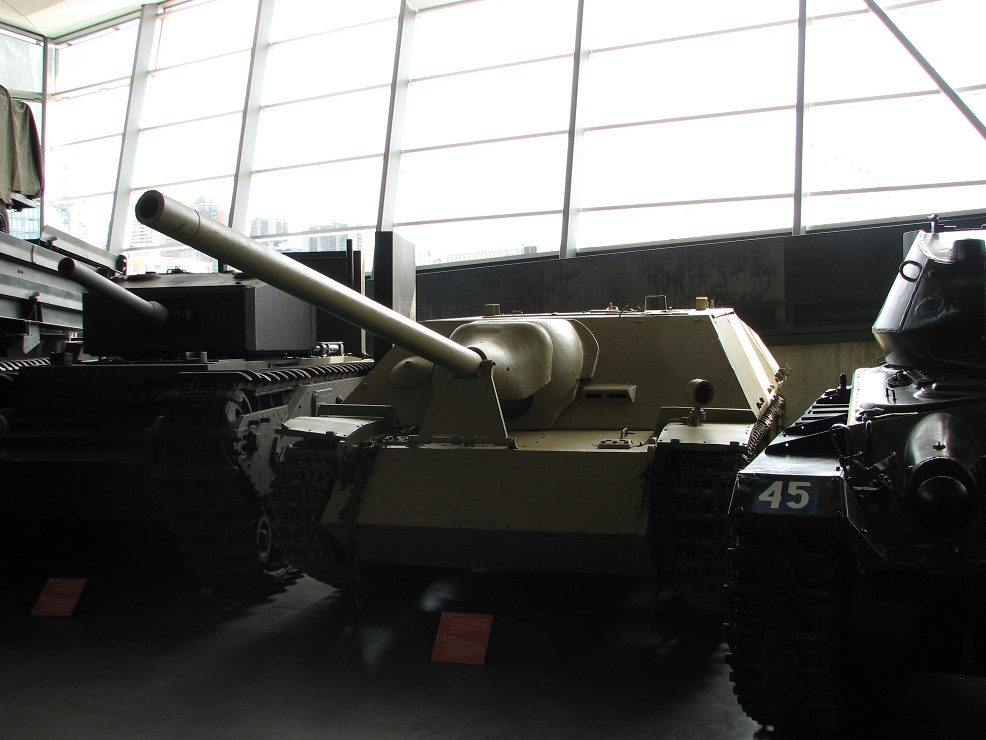 Quite a rare beastie, and as you can see, so close to everything else that its presence was nearly academic. This closeness of equipment is especially evident in the artillery section of the hall. The stuff is jammed in as close as it can get. 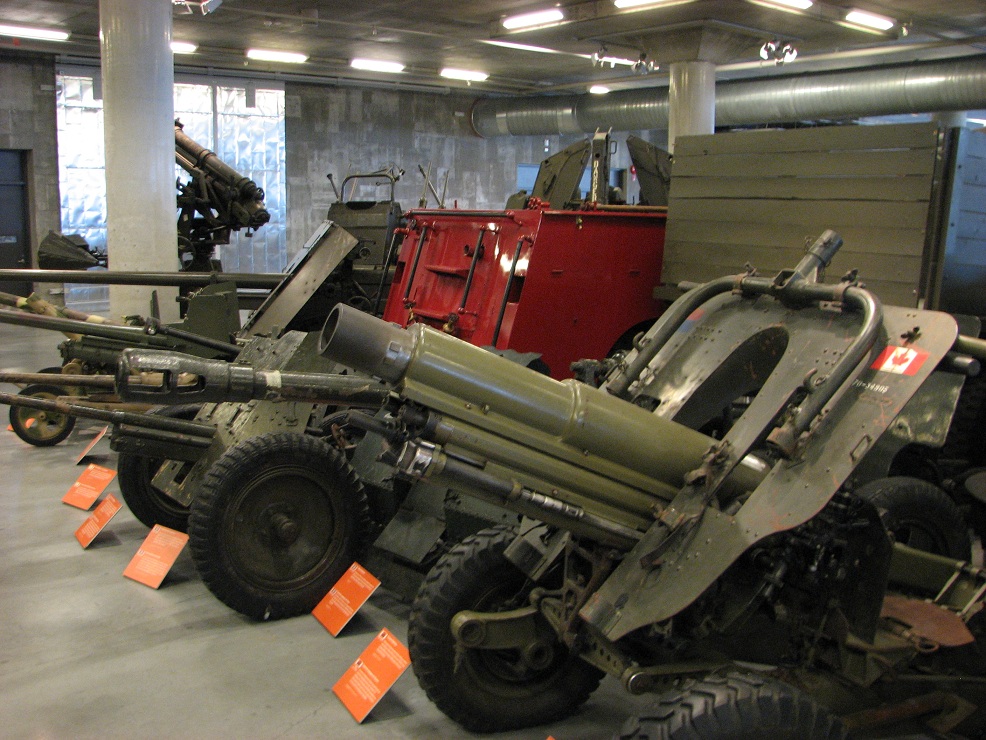 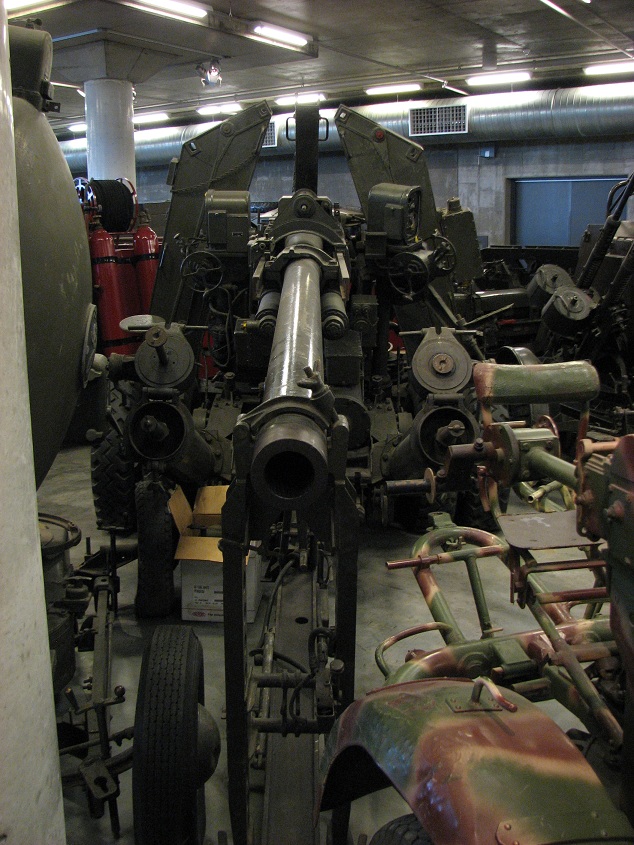 Still, the arty’s worth a look. For example, this seems to be the only remaining example of a towed Land Mattress in existence, if that’s your thing. 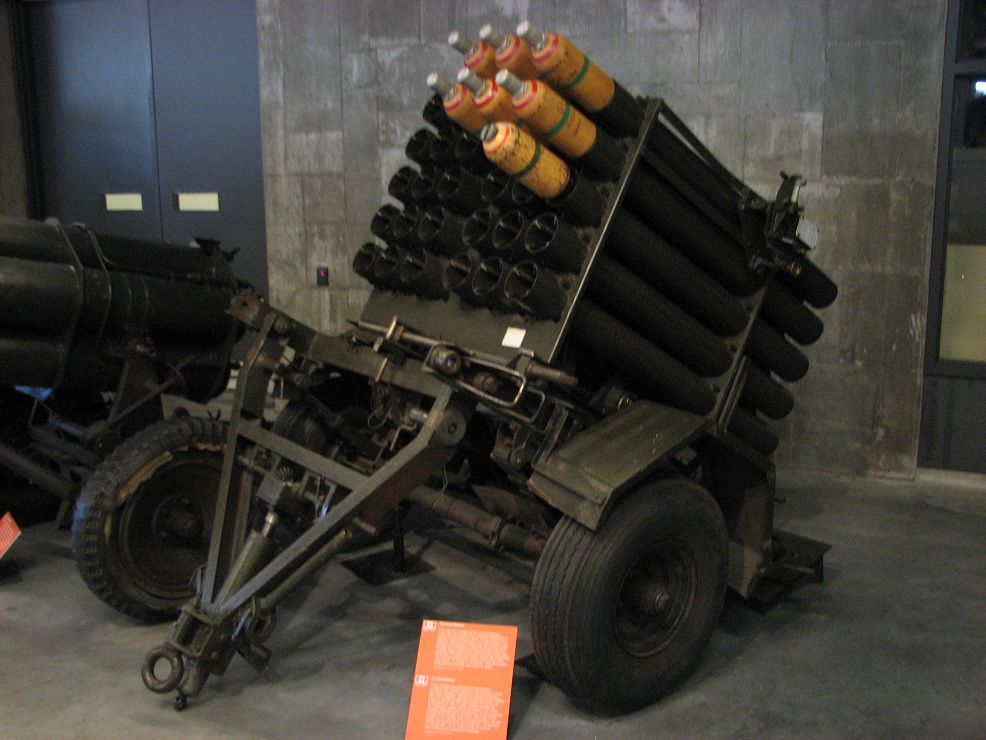 They’re also not afraid to show the insides of vehicles. They had a cut-away M4A2, for example. Not quite the cut-in-half Centurion of Bovington fame, but not bad. 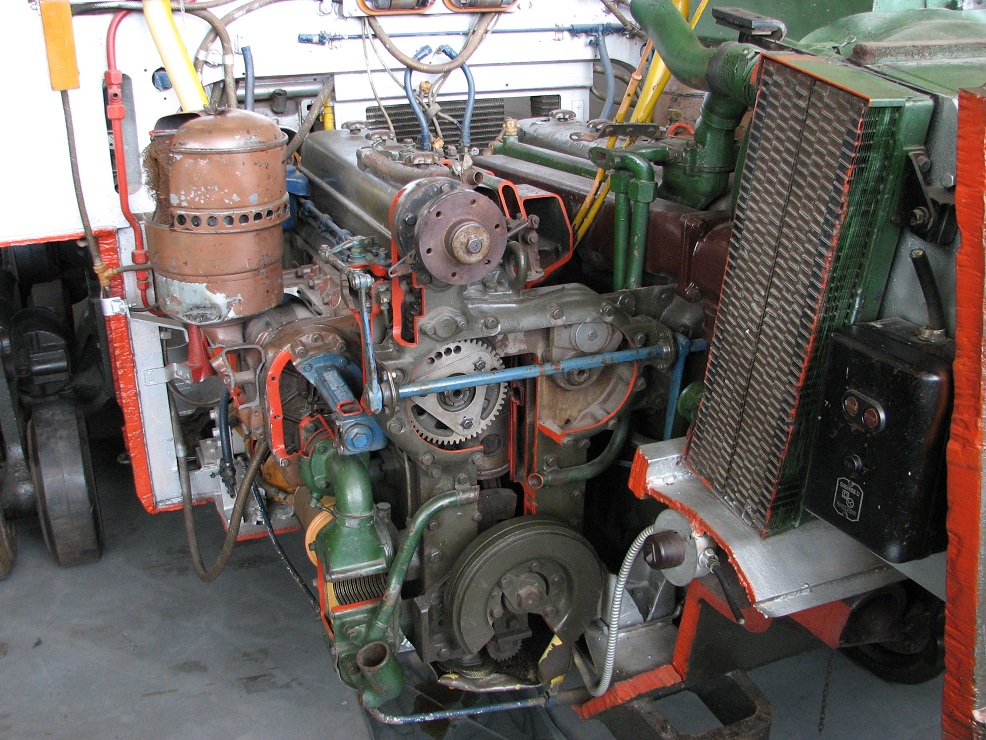 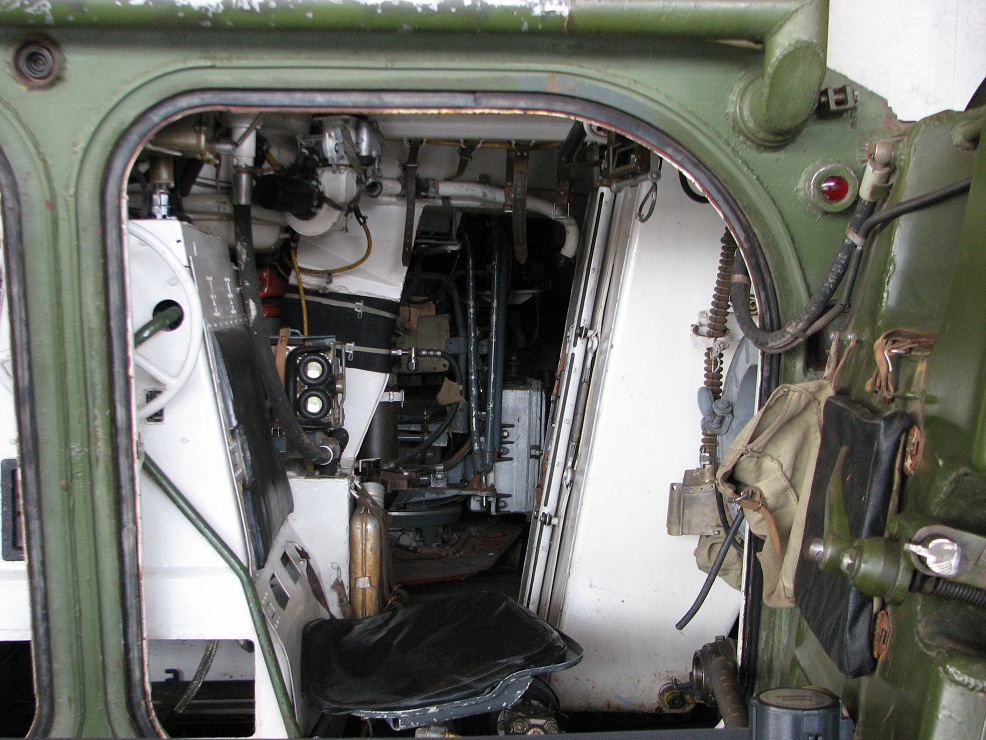 Anyway, you can spend most of an hour in here if you’re taking your time. BTW, if you thought the Pz II in the background was small, I’ve always thought the CV-33 to be rather cute. I believe it holds the distinction of the only armoured vehicle to be defeated by spears. 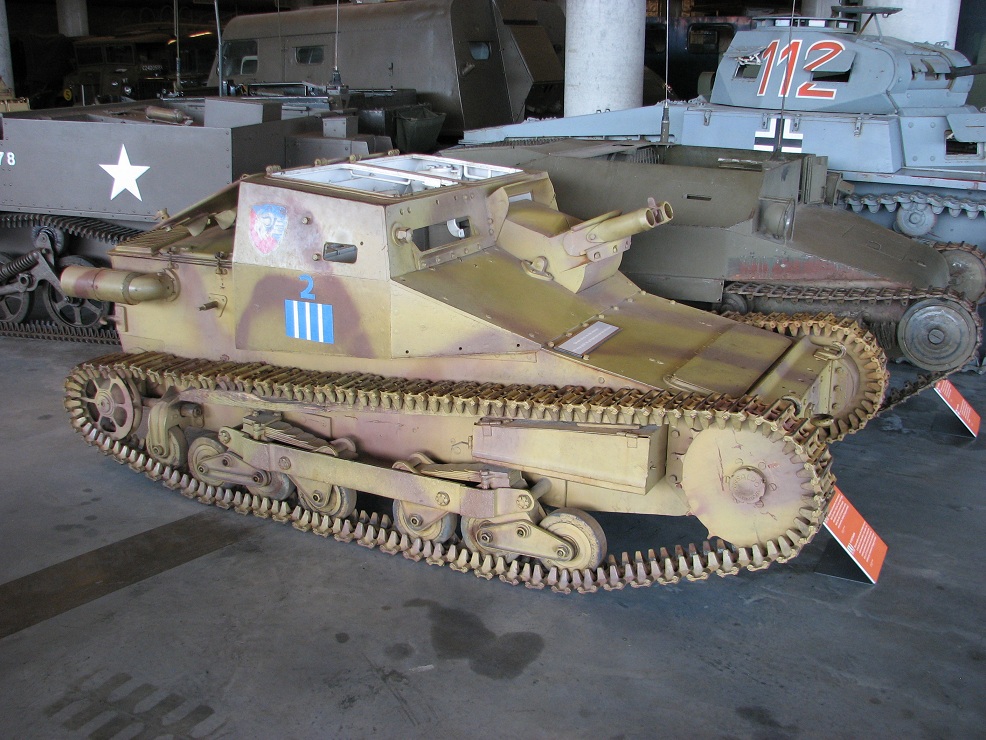 Anyway, once you’re done there, you can hop upstairs to the main exhibition spaces. It’s split up into about seven zones, with a ‘hall of remembrance’ in the middle. Eco-friendly, sensors detect when you’re in front of a cabinet and then turn on the internal lights for it.

Start at zone 1, and it reminds you that the wars in Canada pre-date Canada, as it were. 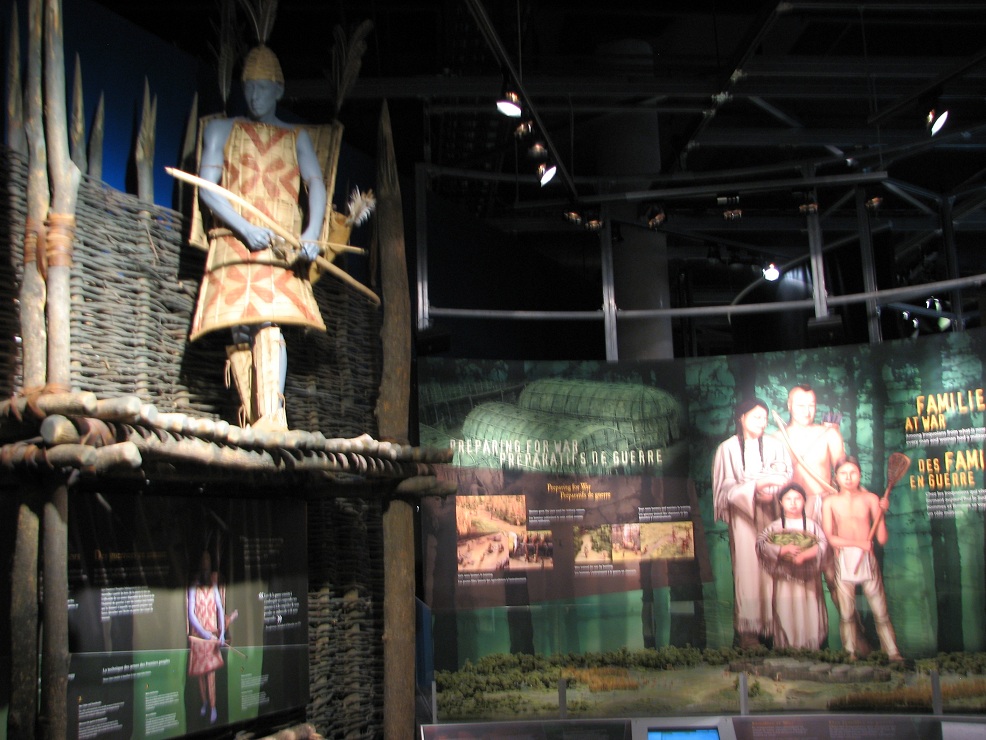 Again, everything is bi-lingual (as one would expect). It is not mandatory that you hit all the zones, but once you enter the zone, there is pretty much only one way to go, you can do a bit of winding around. Apparently swinging by every nook and cranny is about a 5km walk. Not bad for being within one building. There are a nice balance of dioramas, artifacts, and informational exhibits. 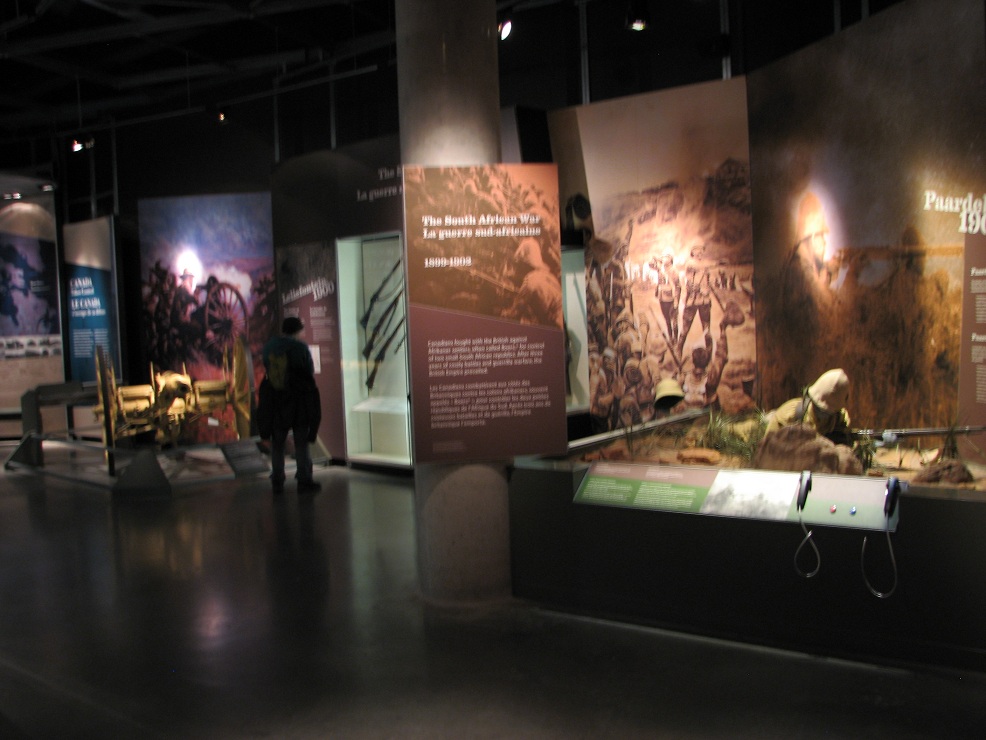 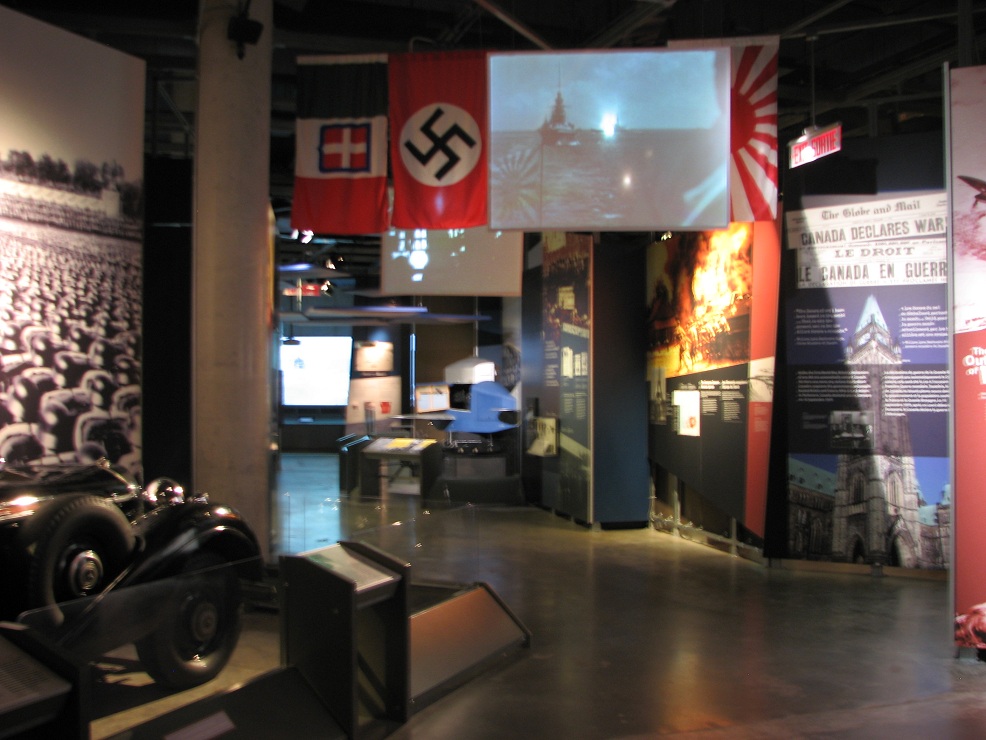 Somehow, they got a hold of Hitler’s limo. 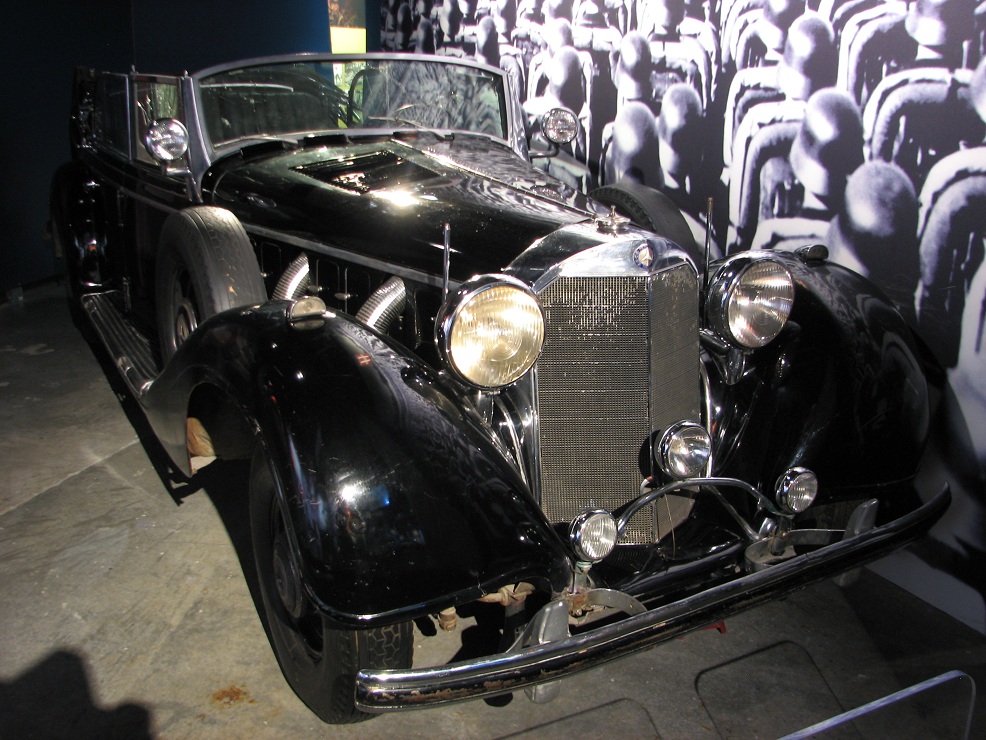 It’s nice to see the Navy get as much floorspace and exhibition space, which is appropriate given Canada’s contributions to the naval war. I certainly learned a few things as I viewed those areas. The devils are in the details, and you can waste a lot of time diving into them. 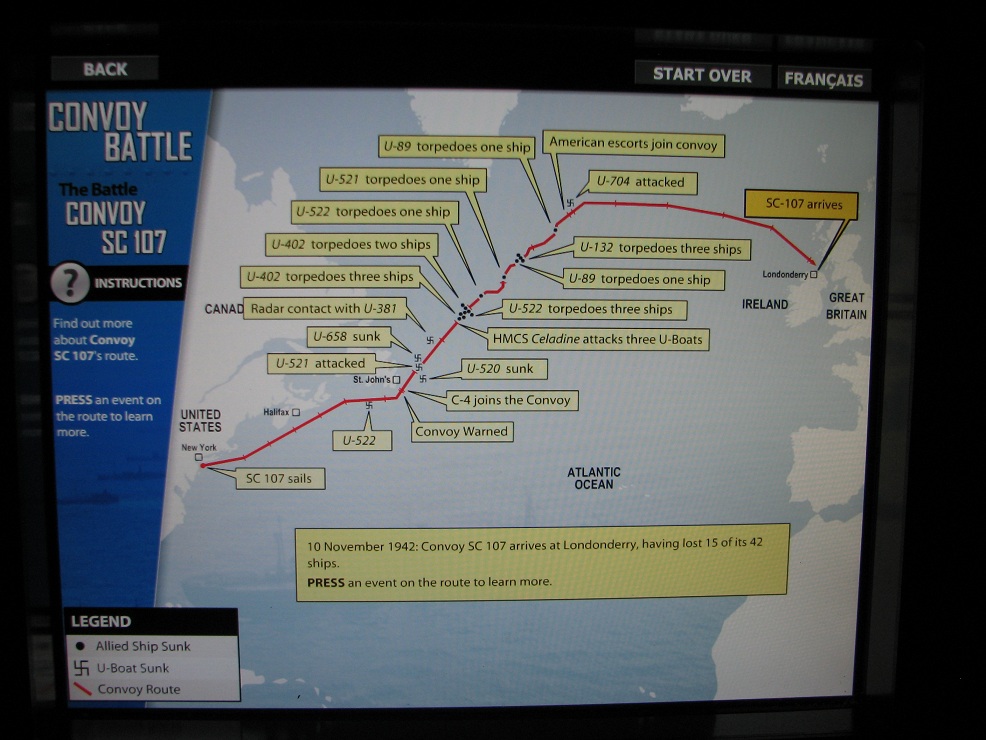 Another way of wasting time is that you can watch WWIII. 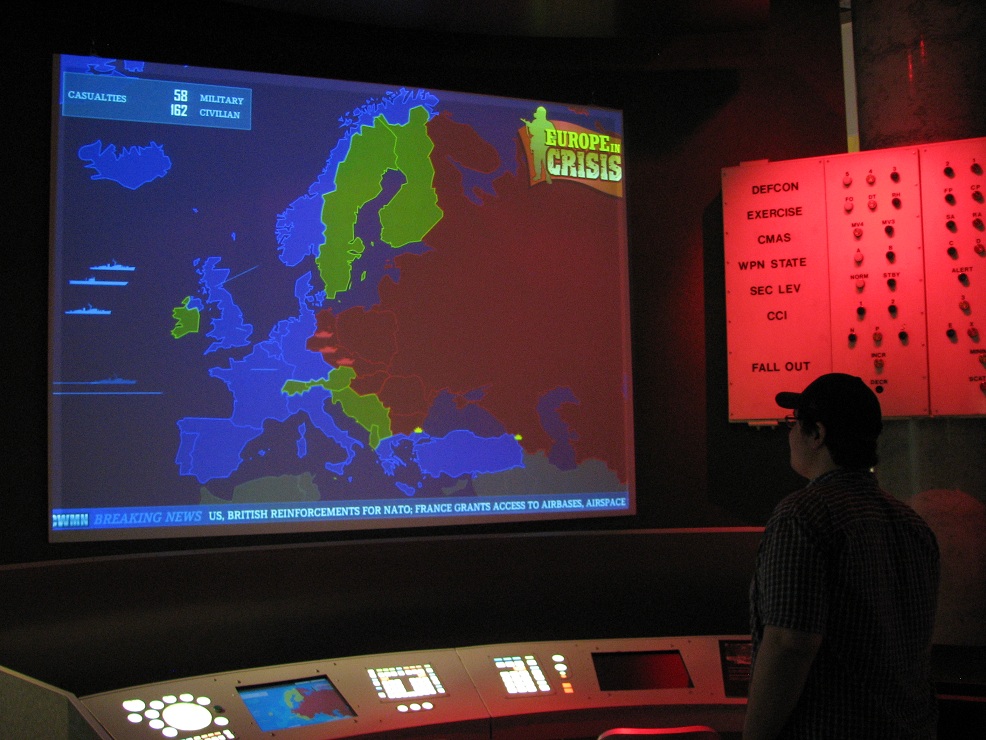 You get a couple of choices as to the war you want to watch, you’ll see a rather entertaining animation of icons moving around the map with the casualty figures going up at alarming rates. It can be rather sobering, which I think is the point.

Another nice touch was a brief little essay on the FLQ unpleasantness. 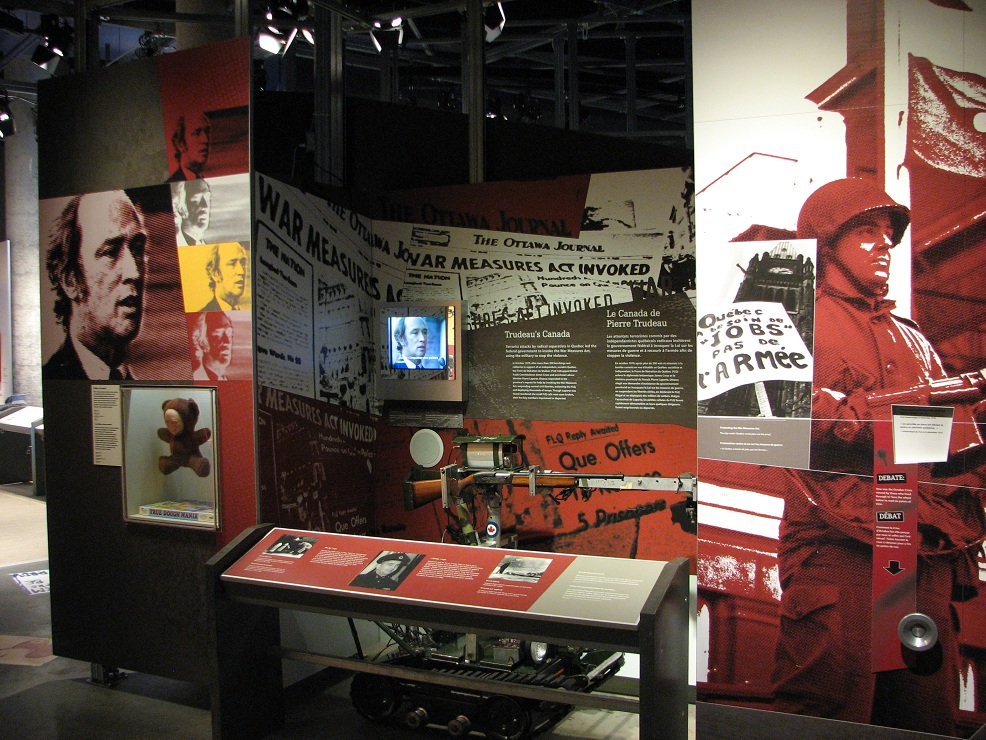 Perhaps not as well known as it should be, particularly amongst the neighbours who might be visiting from across the border, but a significant event in Canada’s military history. I have made mention before of the distinction between a ‘national war museum’ and a ‘museum about a nation’s war’. The CWM is decidedly the former: A place to learn about Canada’s involvement in its wars and about the people who fought in them. It is not really a place to learn about the wars themselves, however, except only insofar as they provide a frame of reference for Canada’s story. 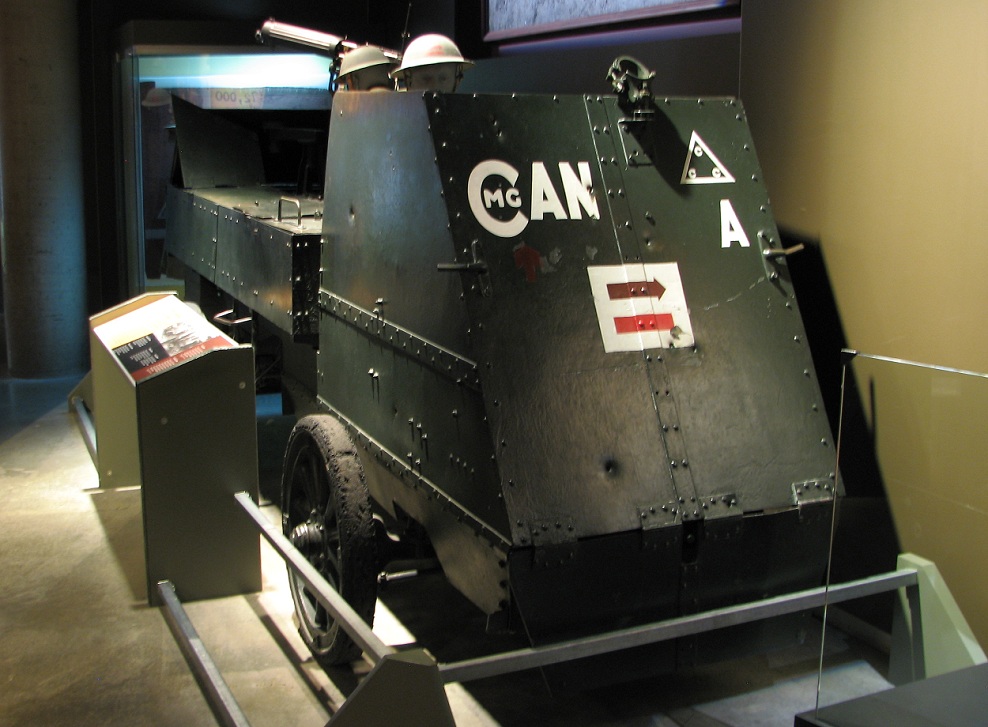 As you progress through the zones, however, another problem starts to crop up. 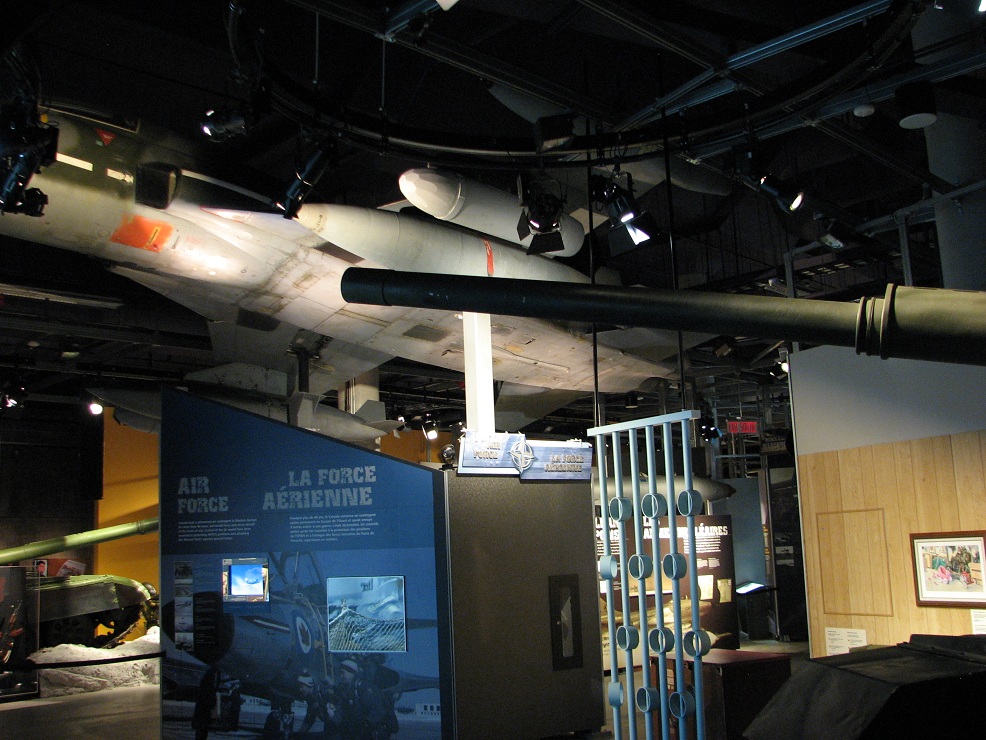 They are really short on space, especially in the more modern sections. Aircraft are jammed up in the rafters, which is fair enough, but they’re usually closely surrounded so that about all you can see is the bottom of it. You can rarely step far enough away to see the side, due to running into another exhibit. I’m not going to go as far as to say that the place can get a bit claustrophobic, but it can certainly get cosy at times. On the plus side, though, that means that there’s more stuff to see. It’s the long-running argument on quantity/quality, and a museum is never going to win that fight whichever way it goes, unless it has practically unlimited space which is rare in a city, let alone a capitol city. 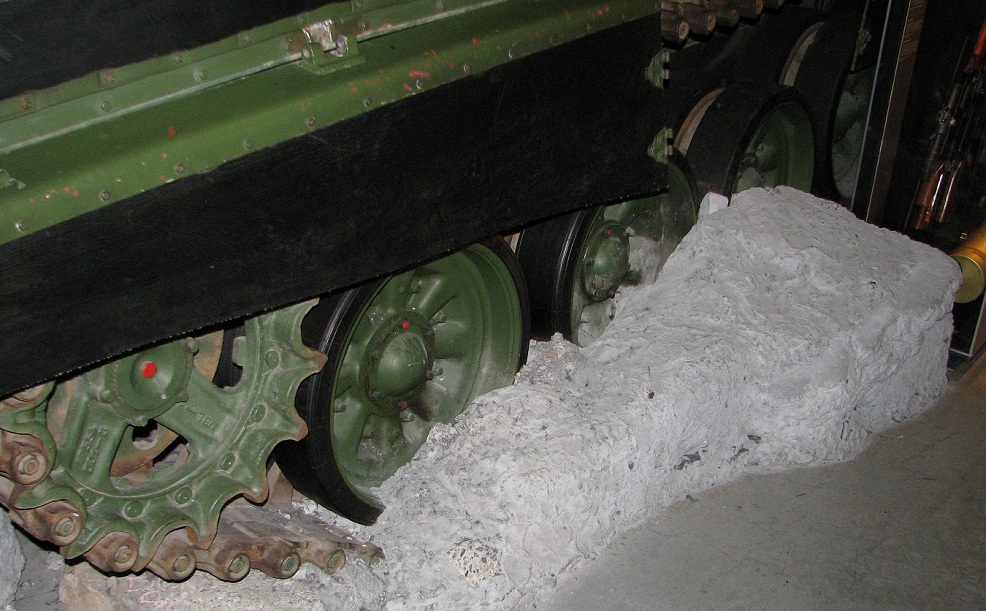 I’m guessing some of the exhibits aren’t planned to be moved any time in the near future. As for the others… The temporary exhibits are the third ‘area’ of the museum, they had a focus on New Brunswickers at war. It’s quite a sizeable little special exhibitions area, but it did look a lot ‘hastier’ than some temporary exhibits I’ve seen. Maybe it’s the carpeting that they’re on. Nothing wrong with the quality of the exhibits, mind.

Ancillary options.. I did have a hot dog in the canteen, it’s generic canteen food. Don’t expect haute cuisine. The gift store was nice, but I saw nothing which seemed particularly appealing.

Anyway, that’s a rough idea what’s what there. The staff were supremely friendly, and you can budget quite a full day there if you don’t have kids tugging at your jacket because they got bored four hours ago. The building is modern and clean, and the park out front seems quite an appealing place for a picnic. The museum does a good job of presenting the stories of Canada’s experiences in war. If you live in Montreal especially, you should make a daytrip out to see it. 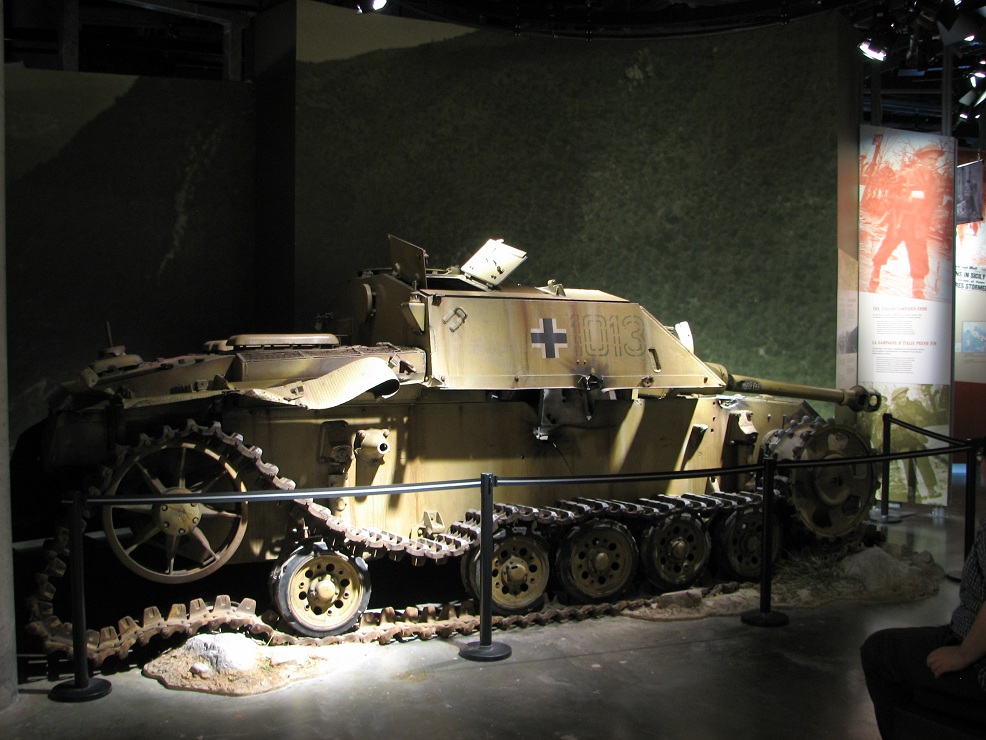