The Chieftain's Hatch: A Military Christmas

Christmas. The time of good cheer and giving. Peace on Earth, Goodwill to All Men. Or something like that.

Of course, when you’re off in a war, it’s probably a little hard to entirely go with the goodwill part of things. It has been many years since anyone has ever thought of having a Christmas truce, wandering over to the other side, and having a football game with them. Nearly a hundred, actually. (How many of you remember the video to Paul McCartney’s “Pipes of Peace, out of interest?) 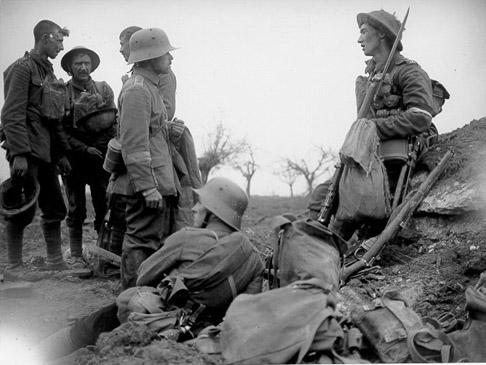 However, it seems that there is still always some Christmas Spirit which manages to break in. Assuming that both sides celebrate the holiday, they’ll make the most of whatever they have, either to the full extent if they’re in a rear area… 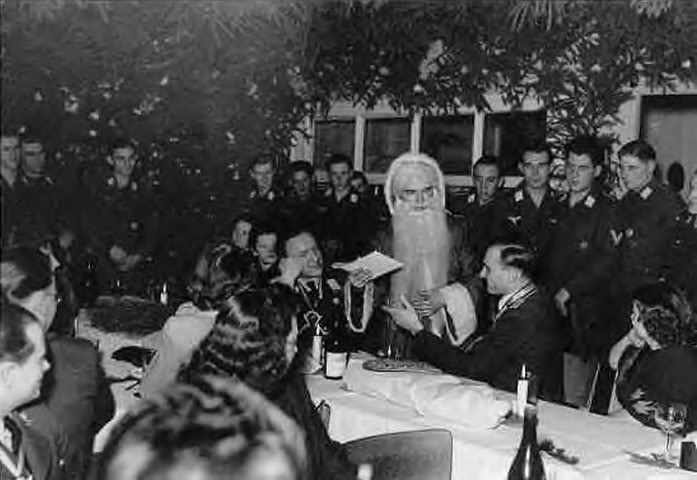 ...or just with whatever they can find to hand if they’re closer to the front line. 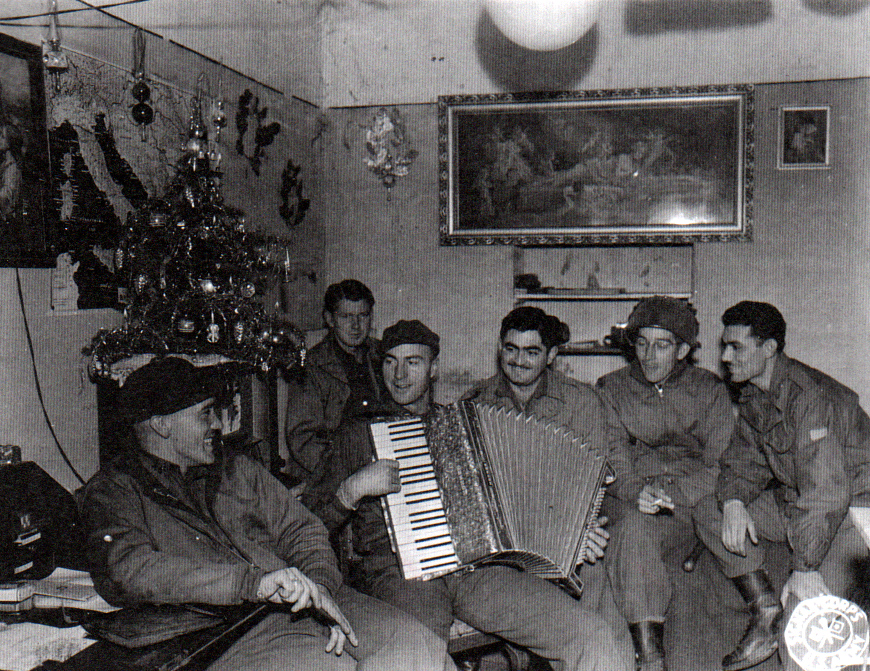 I’ve been relatively fortunate. I’ve only been away for two Christmases. Unfortunately, with the advent of online ordering, even deployment did not relieve me from the task of having to think of Christmas presents to buy for people back home. Worse, the US Army’s policies on such matters prohibit such traditional items as mulled wine being allowed for one to be properly festive.

My first Christmas away was in Iraq. At the time, I was but a simple platoon leader, in order to celebrate the season, we all played ‘Secret Santa.’  Using, of course, the Internet down MWR (order ages in advance for delivery times!), or whatever we could scrounge from the locals. Someone, from somewhere, obtained a santa hat, so the ceremonies basically consisted of a sequential gift-giving, the person opening the gift at the time had to wear the hat. 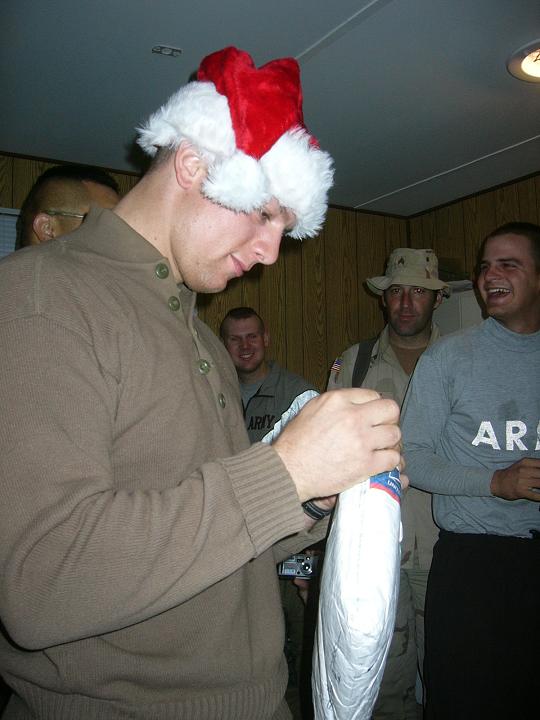 For some reason, I got a bullwhip, which I took to wearing on patrol on my belt Indiana Jones style. Never did find an excuse to use it.

Fast forward several years, and I’m in Afghanistan. Being now a Troop Commander, I decide I’m going to abuse my rank and go travelling on my Christmas Vacation. Well, in reality, I had a platoon detached waaaay the heck at the other end of the country and I hadn’t seen them in the six months we had been deployed. I took the First Sergeant as my travelling companion, and off we went on our grand adventure. Some of you may recall a film by the name of Trains, Planes and Automobiles. It almost got to that level.

Of course, the intent was to arrive in time for the Christmas meal.  From where we started in vicinity of Jalalabad to Qalat was only a couple hundred miles. Google Maps, perhaps optimistically, rates it as an 8 hour drive. Well, let’s give it a buffer. We left on the 21st, hopping a helo which is probably older than I am. The odd thing was that they came with an in-flight safety card. 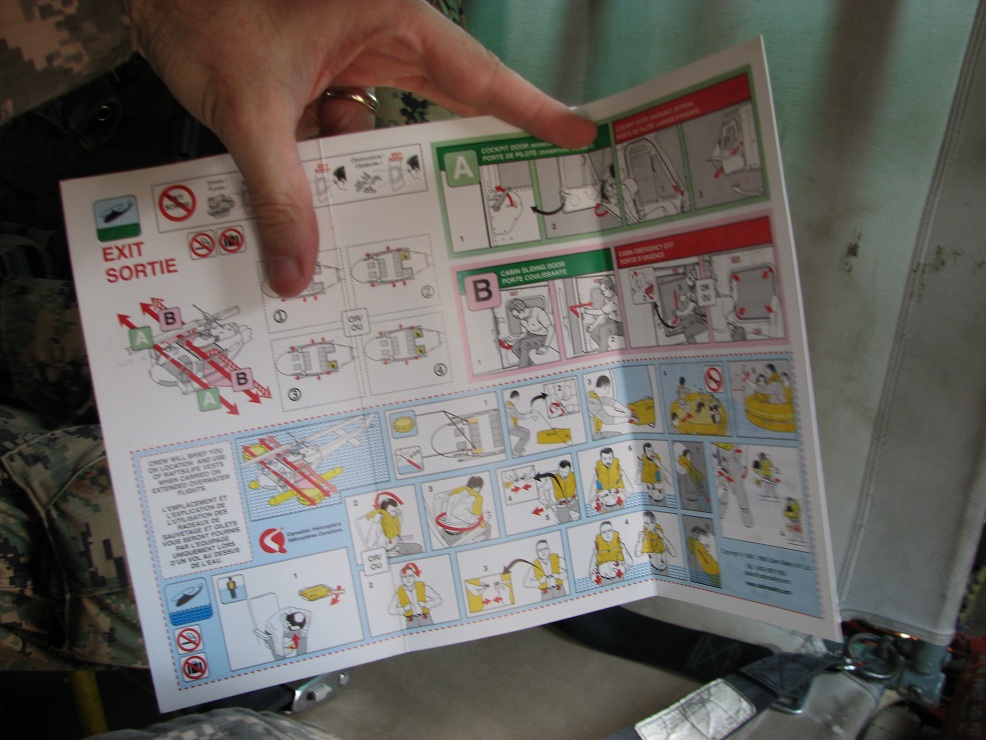 Now, maybe I’m just smarter than the average trooper, but if I’m sitting in a helicopter of that sort, I don’t need nice diagrams showing me where the exits are. I’m pretty sure I can figure it out on my own. In any event, the crash landing never occurred, much though I distrust helos, and we landed in the paradise that is Bagram. Well, it had a Burger King, close enough.

It took until the following afternoon, late, before we could catch a flight onwards to Kandahar. When we got there, we find ourselves basically turfed out by the sidewalk on an unfamiliar base with no contacts and no idea where we were or where we were going. Oh, and it was cold. Heaven forbid people might think there might be people arriving by military transport after business hours.

Eventually we found some transient lodging, and set up for the night. The following morning, we tracked down our contact and set about the next stage of our journey, another helo. It is now the 23rd. We are informed that there are no flights that day, try again tomorrow.

Well, what to do? Obviously go shopping. Kandahar airfield, it has much to commend it, mainly because it’s so heavily populated by multiple nationalities. People who know how to cook bacon without it becoming so tough it shatters when you stick a fork in it! Best breakfast I had in months. Then I found the NAAFI! The Garden of Eden indeed!

Of course, one must remember that it was Christmas, with the associated sights. It must be said, I don’t ever recall reading anything which specifically said that Santa may not be armed. After all, how else would he protect his toys from the naughty men who might decide to steal them? Or maybe G-2 reported the Grinch in Afghanistan? 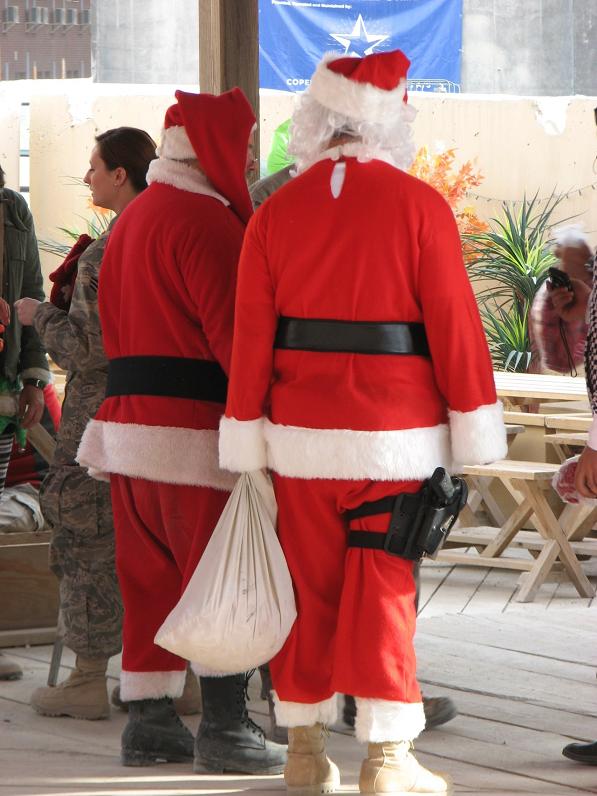 The following day, not being any better for flights and still stuck in limbo in Kandahar, we decided to go shopping again. For those who have not been to Kandahar, it is heavily infested by Canadians, so much so that the main shopping square (“the Boardwalk”) has a hockey rink in the middle. To spread Christmas Cheer from Ottawa, the Chief of Staff showed up, and he brought some entertainment with him. No idea who, but hey, we weren’t that picky. 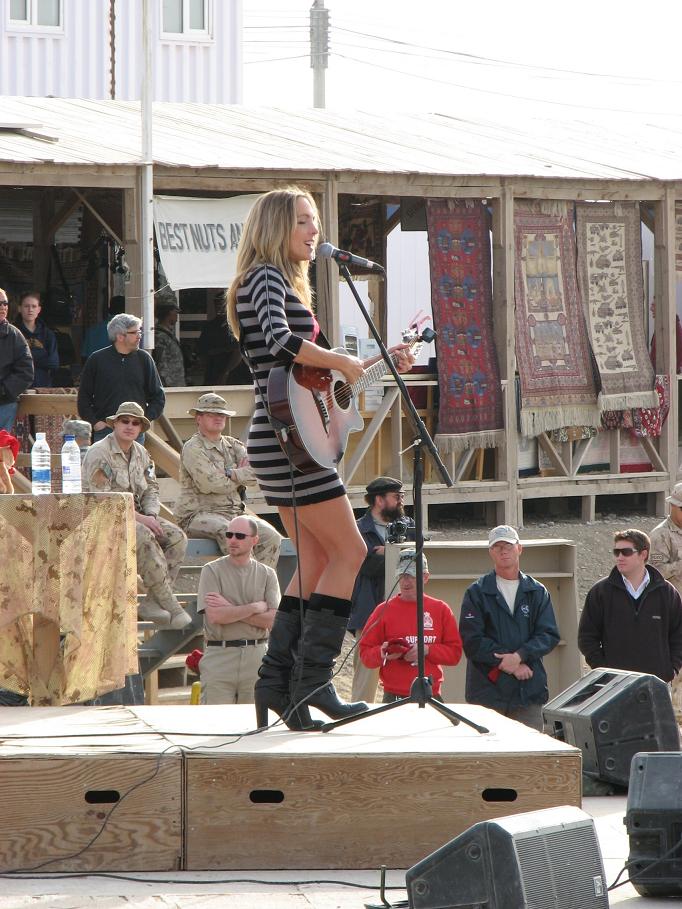 Eventually, on Christmas Morning, we caught an AW.139 to Qalat. In Zabul province, there really does seem to be nothing there. Upon arrival, I find that my lieutenant and a detachment of his are another helicopter ride away, into very much the middle of nowhere, to attend a bridge opening. The bridge opening could be the subject of a different article, suffice to say, from the look of it I just hope the bridge is still up. Fortunately, we were able to find a CH-47 going the same way. 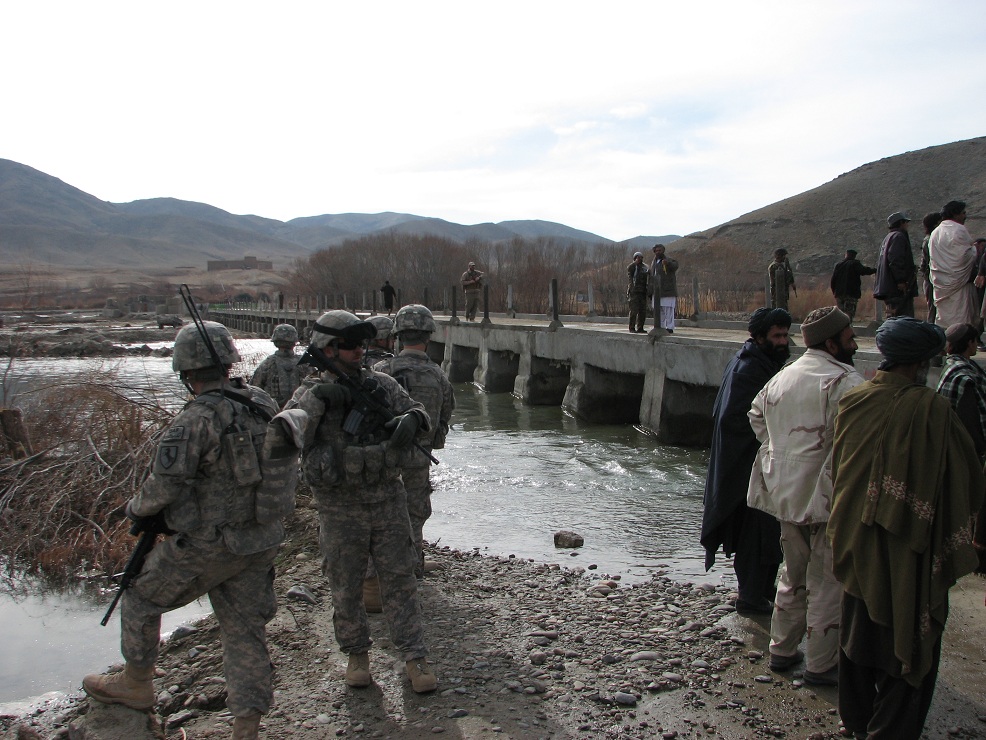 After the ribbon cutting and sheep slaughtering, we could take stock. This was Christmas at the other extreme, a dozen guys out about as far from anything resembling the comforts of home as it was possible to be. But Christmas it still was.

There is a footnote.

We still had, of course, to return home. After the trip over, we were set to return on the 27th, after all, we still had our jobs at the other end of the country and the war would undoubtedly fall apart without us. Getting to Kandahar was simple enough, but there was an interesting barrier en route to Bagram, or more accurately, a barrier to getting onto the C-130 to Bagram. Yes, it’s airport security. 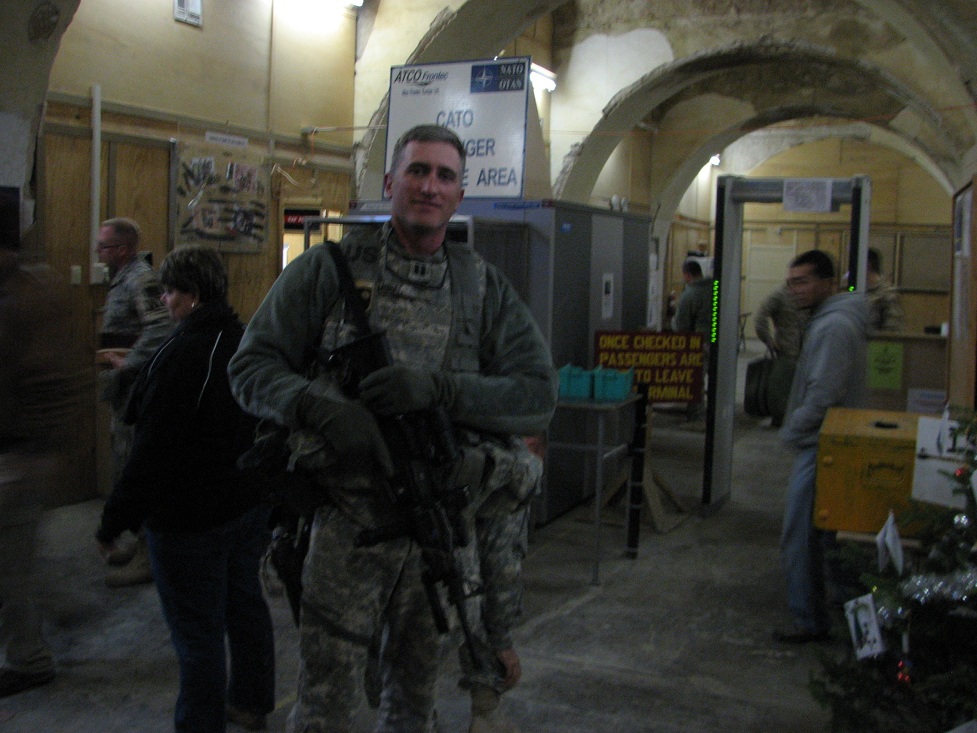 Now, please remember, this is a war zone, and I’m taking a military flight. The security checkpoint is manned by RAF MPs. Once the shock of seeing airport security had diluted, I beckon one of the lads over.

“If I might ask, are you expecting us to go –through- the checkpoint”?

“Is this…” (as I gesture towards all the gear I’m festooned with, to include two firearms) “… going to be an issue?”

“Well, Sir,” he replies… “how much ammunition are you carrying?”

I’m thinking to myself “why the heck does it ma…. no. never mind. I’m sure there’s a reason he wants to know.” Now, I subscribe to the philosophy that you can never have too much ammo, unless you’re walking a long distance. That said, I’m travelling light for this trip, but I have to do a mental count of magazines.

“Too much, Sir,”, he says, You’re only authorized to bring 45 rounds on with you for a sidearm”

“And what do you suggest I do with the extra magazine?”

At this point, nothing is going to shock me. If you look in the picture, you’ll see all sorts of knives on display as ‘prohibited items’ on the wall behind the checkpoint.

Knowing better than to try to fight the bureaucracy, I dutifully put one 9mm magazine and my knife into my rucksack. I then pull my rifle sling over my head, place the rifle on the conveyor. It is subsequently joined by my sidearm belt, web gear, body armour, and jacket. It all goes through the X-ray machine. I go through the metal detector. Of course, I beep. The culprit, the buckles on my boots. Once having concluded that, indeed, I had no weapons secreted on my person, I then retrieved and re-donned  my jacket, armour, web gear, rifle and sidearm, and was cleared to proceed to the aircraft.

I ended up back ‘home’ the evening of the 28th.

I will say this for the Army, they do tend to provide me with memorable experiences.

It is unlikely that too many of you are reading this from far from friends and families. Those of you who are, I send a special acknowledgement, I know where you’re coming from. However, the good news is that if you’re on a deployment, if you can’t be with family, chances are you’ll never find a better group of people to spend Christmas with than the comrades in arms that you’re in the company of right now. 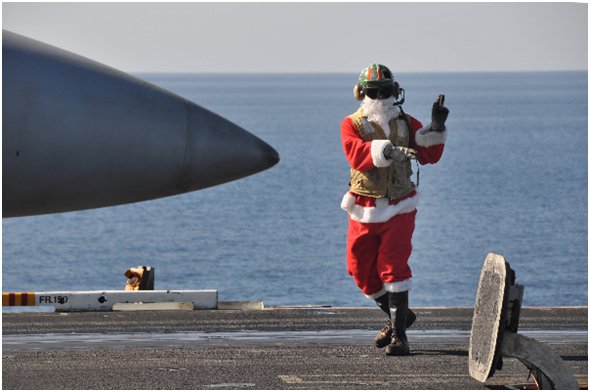