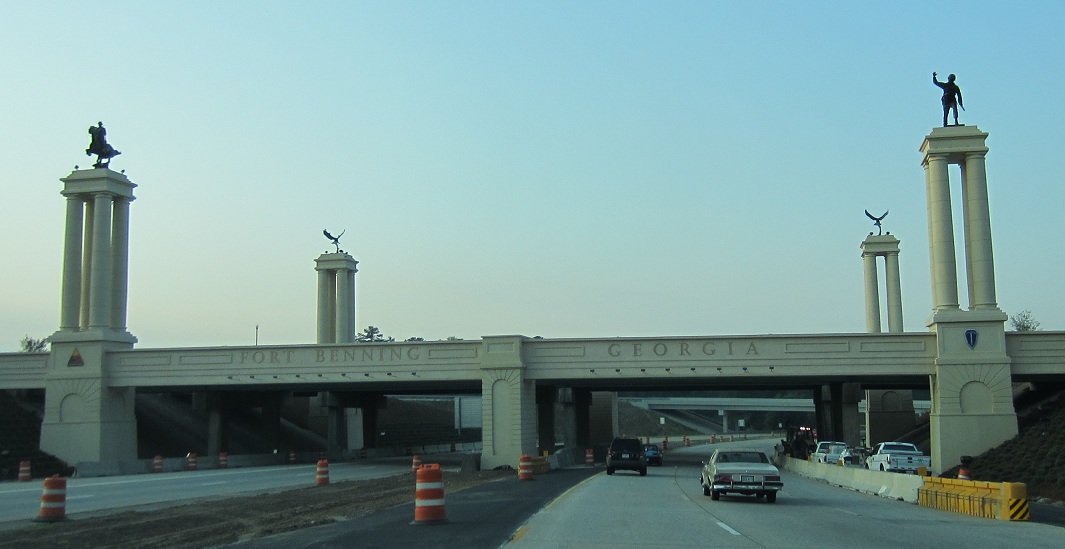 Sitting on the airplane to Atlanta, the gentleman in the seat next to mine was a 1st Armored Division veteran, who lived in the Atlanta region. As I was travelling in ACUs, my destination was pretty easy for him to divine.

My response was shocked and immediate.

Now, the merits of sending armor officers to Ranger School is a matter of discussion for another time, and I'll admit to being a bit of a heretic on the subject. But the gist is clear. I, like some others, consider Benning to be enemy territory. In fairness, the base seems quite nice, and they are taking great effort to make Armor feel at home, but the common perception is that Benning is infantry turf, and it will take some time before dinosaurs like myself stop seeing Knox as ‘home.’ I’ve been to Knox several times, this was my first visit to the Home of Infantry. I wonder if our infantry counterparts view us tankers as interlopers?

Actually, it took two days before I got onto Benning itself. The Maneuver Conference was held in next-door Columbus, Georgia. Just as Armor and Infantry branches have combined forces in the Maneuver Center of Excellence (who comes up with these names anyway?) the old Armor Conference and Infantry Conference have similarly combined. 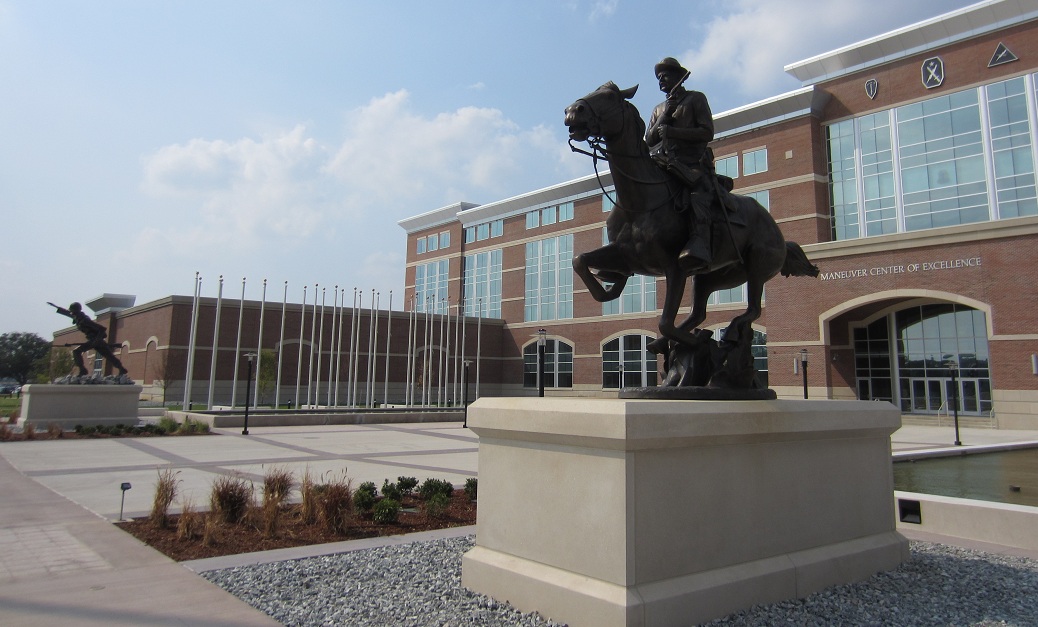 The general format hasn’t changed much. One still has the briefings and discussions, the opportunity to hobnob, and the vendor stands outside showing their wares. The two themes of the conference were “The Squad as a Strategic Formation” and “21st Century Training”. The former basically means that they’ll be doing greater emphasis on the old-fashioned rifle squad as, rightfully, the most important part of the Army, especially in the current low-intensity environment. 21st Century Training more was a discussion on how to leverage technology and the new troopers’ ease with it. A particularly interesting proposal being supported at high level is to issue every soldier with an avatar for the simulations. It looks like him, and acts like him, so if your PT test score is low, your speed is low, or if you can’t hit the broad side of a barn on the rifle range, you won’t shoot accurately in the sims.

However, that’s all generally boring stuff for you guys. If you have particular interest in the meat of the conference, the Ft Benning Website has video streams of the various briefings, you can spend many happy hours watching them if you so desire. What you guys are more interested in though, are the toys!

Yes, many vendors were outside, hawking their wares.

Rifle stands were always popular. S&W were demonstrating their new mods to the M4 series, much cleaner operation they claim. 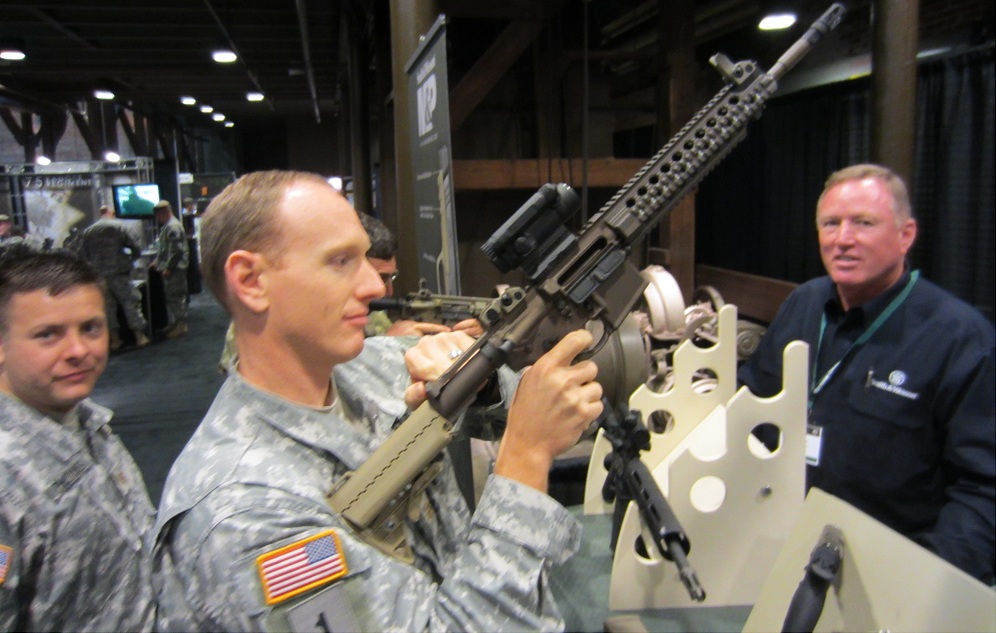 The H&K and Colt stands were equally well visited.

People should be well familiar with thermal imager systems. Standard observation system on armoured vehicles, and often found mounted on machineguns, sometimes even small arms. This one was sensitive enough that it would pick up footprints on the carpet, the friction of boot sole on carpet left a heat print visible for about five seconds. 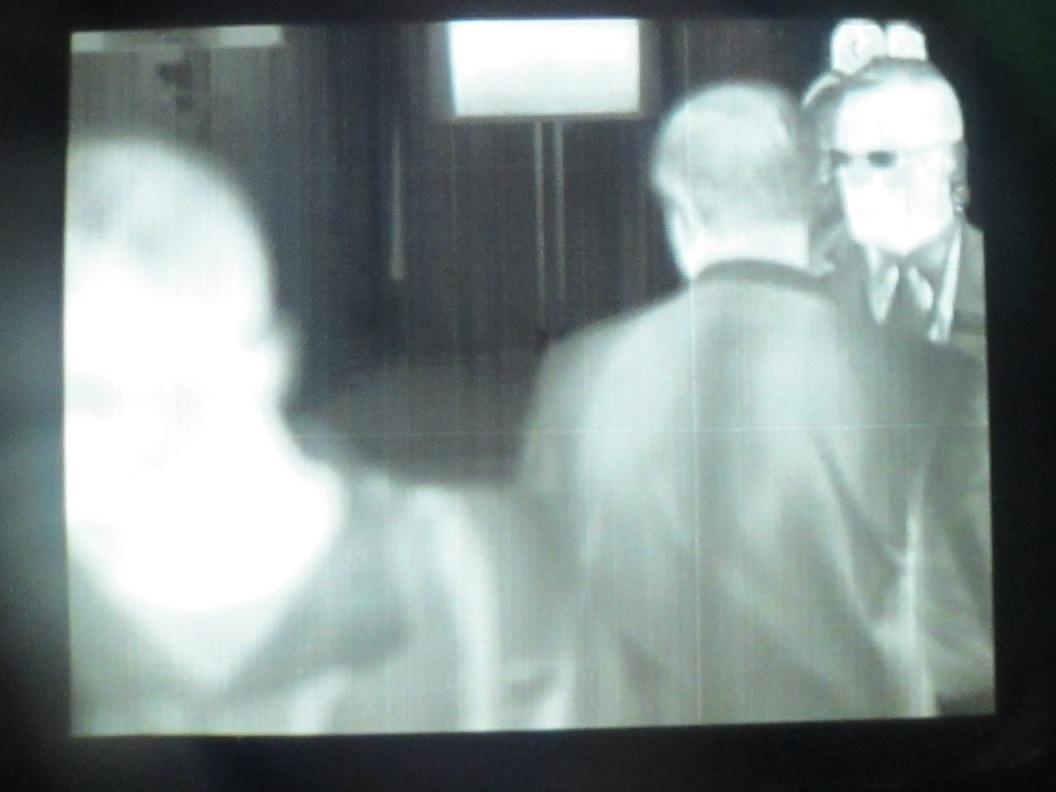 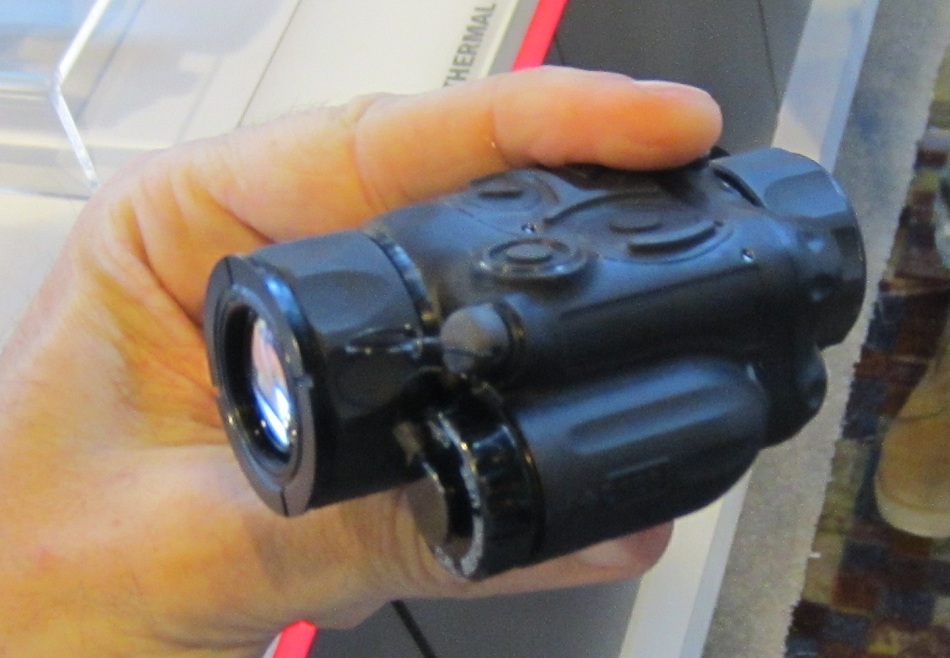 If you think that’s impressive, keep an eye out for the Digitally Fused Sensor System. I’m looking around the office for something sufficiently small to give a size comparison, the closest I have is a 1:72 model of an Ariete, and even that is too big. DFSS combines both visual and thermal into one image. Probably will be stupidly expensive and on issue only to Special Forces, but still quite a technological feat.

You’ll probably have seen this on the TV by now. Virtual reality squad training. 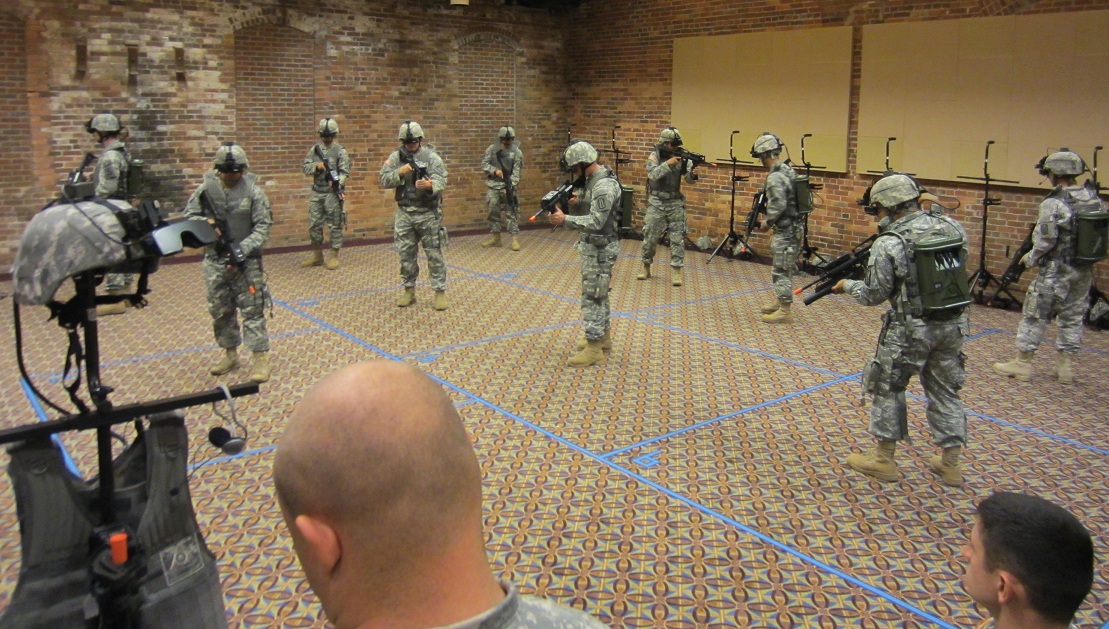 The system keeps track of the direction you’re facing, and your posture, so if you lie down or take a knee, the same happens in the sim, as does turning your head. However, it’s all very quiet and civilized, other than the troops shouting orders at each other, no chaos. (A demonstration in the next room for a different sim tracked all motion: You had to run around, but were limited by the size of your room) When incoming fire comes at you, there’s no incentive for you not to take your time and calmly breathe. They’ve come up with an answer to that one. 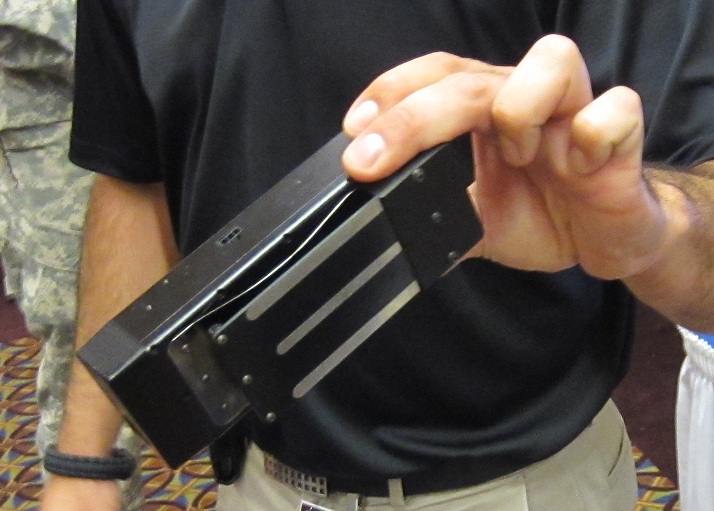 This little device is worn over the top of the trousers, the thin side fitting between the trousers and your shirt or skin. To simulate the distraction caused by someone shooting at you and to prevent you from aiming correctly, the thing gives you electric shocks. Foolishly, I volunteered to try it out. The result was a yelp, I jumped a foot into the air, and all the other guys watching burst out laughing. True, it achieved the desired endstate of taking me off target, but at no time when I’ve been shot at in the past was part of my reaction to contact drill to leap up to one side whilst crying “aaugh!” I think the idea needs a bit of tweaking. Or at least, the voltage.

For those of you who complain about laser-guided artillery pinpointing your tank being unrealistic, you’re absolutely right. Copperhead is outdated technology. Meet Excalibur. 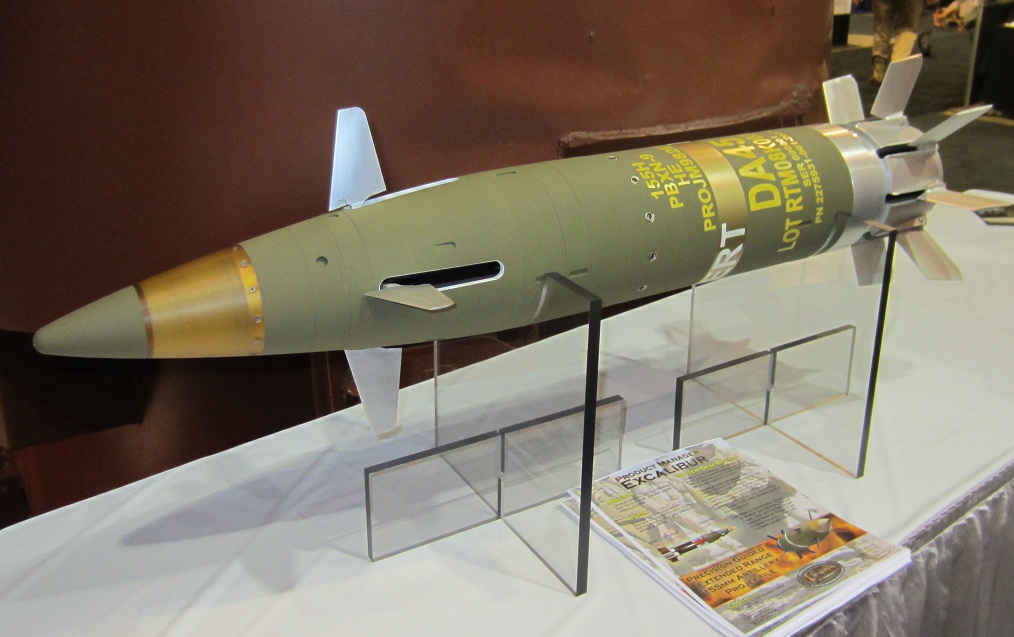 Been in service a while, as has the APMI mortar counterpart, but here’s the photo anyway. Other items on display included a throwable radio-controlled camera robot (Quite literally, you chuck it as far as you can, then it rolls around on the ground), cutaway of main gun ammo, including M829A3 which has a seriously long penetrator, all sorts of flashlights, knives, clothing, eyewear and insurance. Of interest, I hit every booth selling boots, and there was every sort of infantry boot imaginable. Which didn’t help me very much as I was looking for tanker boots, mine are getting a little worn. It’s surprisingly hard to find a good tanker boot ever since the Army went to desert tan.

Meanwhile, outdoors, in the sun…

BAE had a good presence, with a variety of  Bradley variants. Medical, mortar, command… Unfortunately, and this was common to a lot of vehicles, photos were forbidden of the interiors (and in some cases, of the vehicle at all). I think they might be trying to put a little too much on the Brad’s turret, though, I’m not sure what the motors think of all the extra weight.

This Stryker is wearing a new external modular camo system. 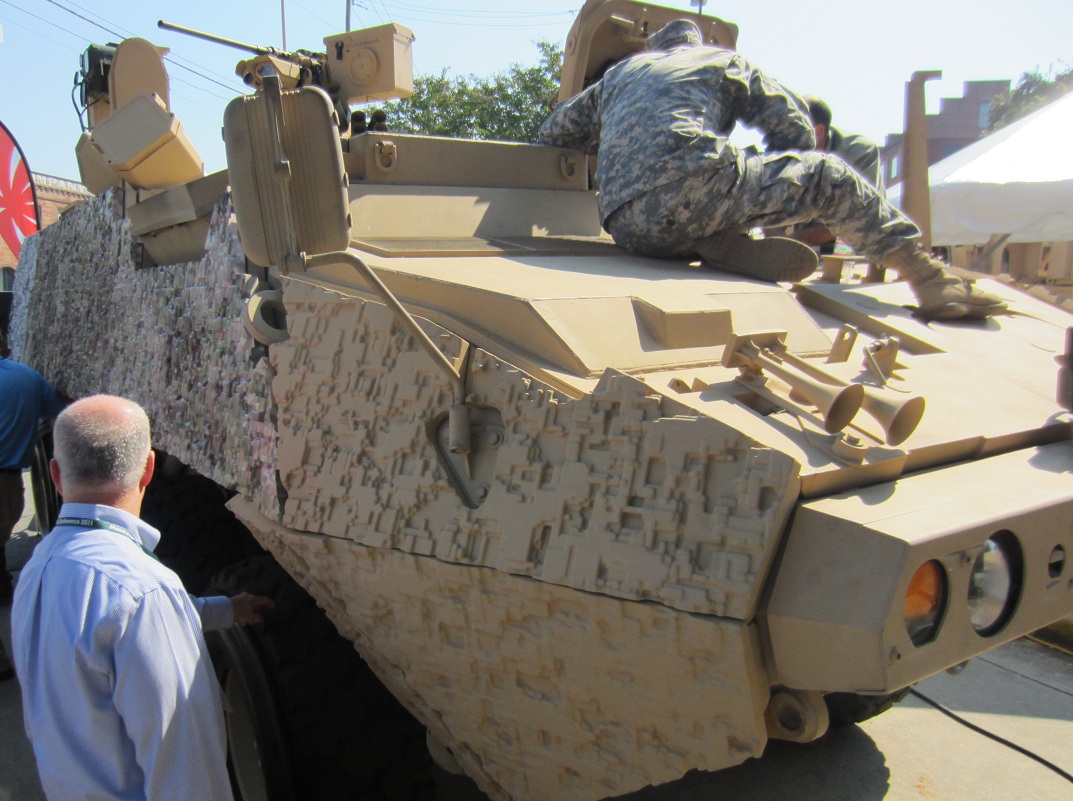 It’s a hollow foam thing velcroed onto the vehicle, so it’s pretty light, and it also insulates the thermal signature, allowing ambient air in its place. The rough coating aids in visual and radar camouflage, and the modules come in varying colours: Going winter to summer takes only an hour or two. Probably a better way of doing it than the old MERDC where soldiers would have to repaint half a tank because the leaves were falling off the tree. A new version of this system has ‘angled’ surfaces, to defeat lasers. I am also pleased to report that the new M-ATV have fixed some of the “what were the designers thinking?” issues that users of the early production vehicles will be familiar with.

The last day of the conference was an open house at Fort Benning. I swung by OSUT to see how Basic Training has changed since I went through at the turn of the millennium. Of course, no Agony or Misery here at Benning. Wonder what the local equivalent is?

This is the Benning version of Disneyland. (Knox graduates will know what I’m on about). Standing on a running track, PT and IMT pits in the middle, and barracks/classroom buildings on each side. Each building can hold up to 200 or so troopers. Inside the barracks are clean and spacious. 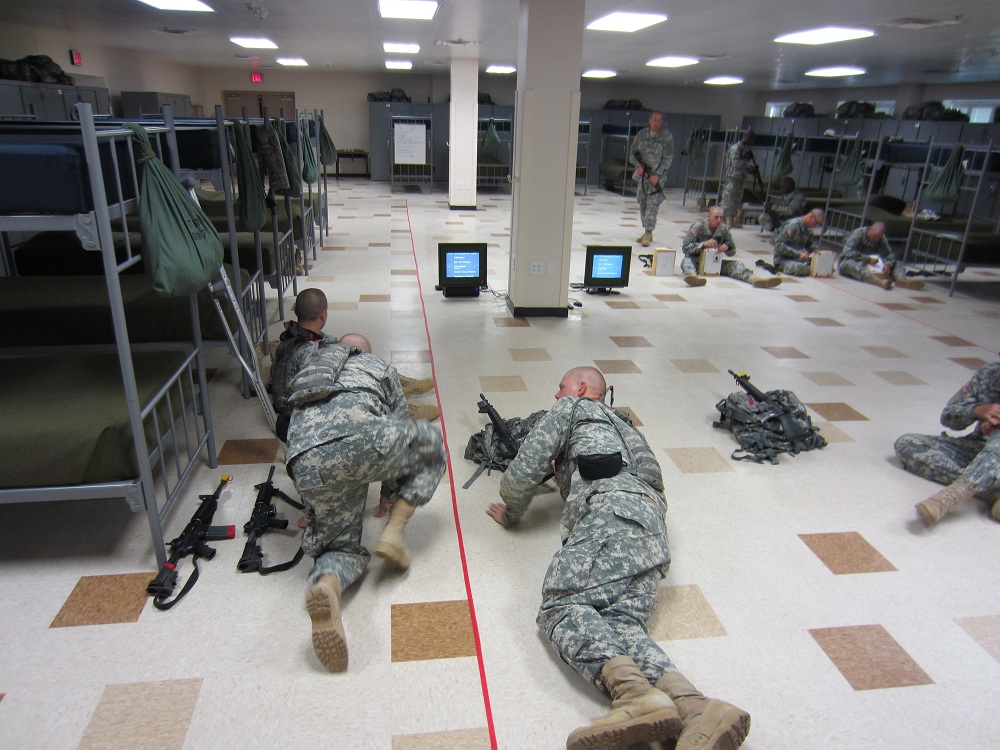 Of note, the ceiling tiles need a specific tool to be removed: Being designed specifically for basic training, a special effort was made to make it much more difficult to hide things or evade the Drill Sergeant’s watchful eye. These troopers are in week 2, they’re doing basic rifle marksmanship.

I also had the pleasure of watching a ‘pickup.’ These troopers have been off the bus from reception for about three minutes. 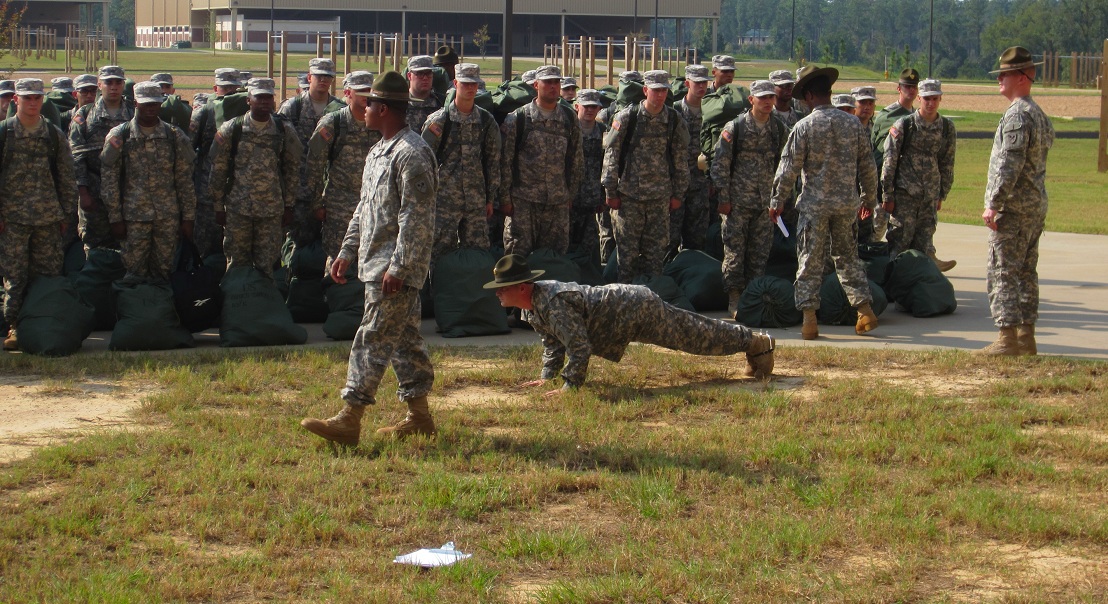 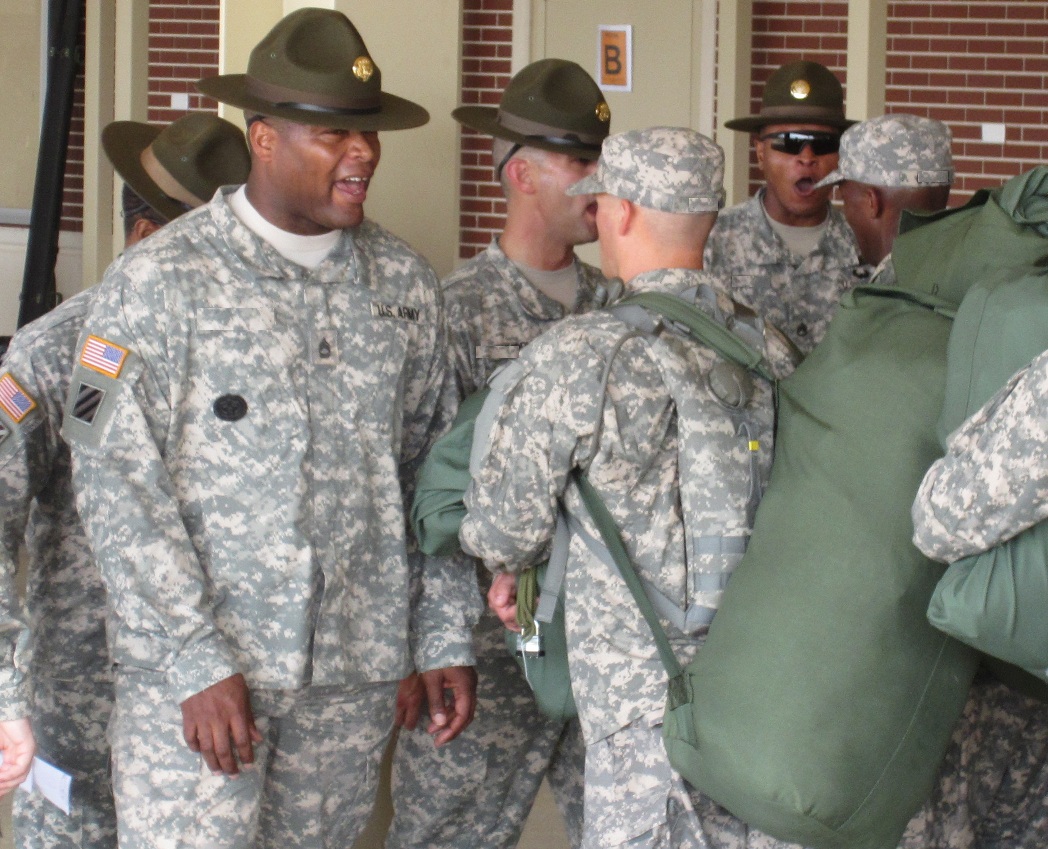 Anyway, I close with a video. Sadly, I brought the wrong camera, it only has a 30-second limit. Still, this might be enough to bring back a few memories…

As ever, larger versions of these pictures are on the forum, click ‘add comment’ just below this.