Entering Op-Ed mode for this one.

Thirty years ago today, General Menendez signed the terms surrendering the Argentine forces on the Falkland Islands,and bringing an end to a very nasty and violent conflict. Now, the origins of the war are hotly disputed, I’m sure many Argentines reading this as they’re on the NA server have a pretty much similar opinion to the British ownership of the islands to some Irishmen talking about Northern Ireland. For my purposes, and I’d wager for the purposes of the 649 Argentine and 255 British servicemen, and one Falkland Island civilian, it doesn’t really matter and I don’t care to get into that part of things. What I do care about is that I consider to be the last ‘classic’ war and it deserves study. 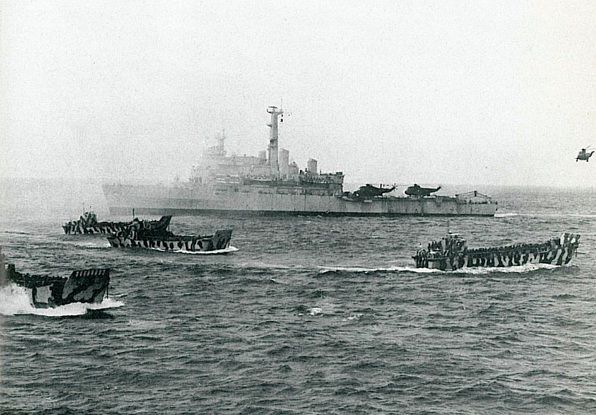 This was a drag-down, few-holds barred, in-your-face, conventional fight between first-rate powers, the losing side of which would suffer irredeemable embarrassment and the government would fall. The outcome was very much in doubt from the start with; as Admiral Woodward put it, several entirely competent organizations such as the US Navy of the opinion that the British forces would not succeed  when they set  out to recapture the island. Conducted with great adherence to the Laws of War, (the only definite war crime I am aware of was the shooting of a prisoner by a British serviceman, though arguably there was a case of false surrender by an Argentine unit as well), there was no ‘contaminating’ of the war by ethnic cleansing or hostage taking. Indeed, one British serviceman was given awards by both the British and Argentine militaries for his conduct. Well-equipped uniformed combatants from one side engaged well-equipped uniform combatants from the other with conventional weapons of all branches of service, no worries about civil wars or the like. 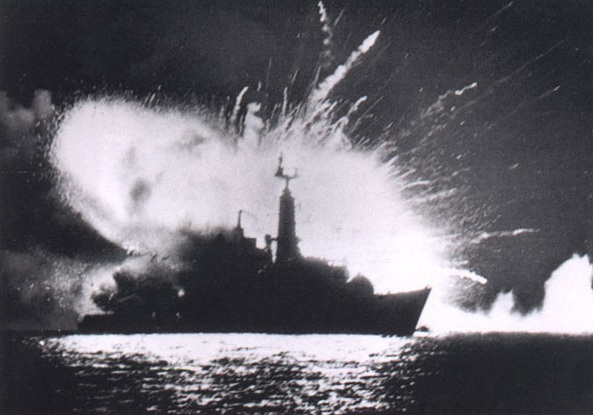 Of course, there were other conflicts since which meet most of these descriptions, such as 1991 Kuwait or the Russia/Georgia clash, but none that seemed to have every engagement so important to the final outcome. Two torpedoes here significantly changed the naval battle. A single Exocet missile there had massive effect on the land battle (and started a legend). What would have happened had the winds not been calm on the morning that 25 de Mayo was supposed to launch her airstrike? The Falklands conflict is one hugely deserving of study because it is small enough for a student to grasp an entire war from start to finish, from land, sea and air, from logistics to effects of equipment, yet with individual battles the outcomes of which can be analysed. And the shame of it is that it is one of the most ignored conflicts in modern military history and deserves more study. It’s not as if there isn’t ample resource to read from. And for those of us who speak English, the release of many documents in the UK this year under the Thirty-Year-Rule is going to make this even easier.

There are a number of common beliefs out there which I hope everyone takes opportunity to debunk. The first one is that the insanely superior forces of the advanced, NATO-member UK swanned down and ROFLStomped a tin-pot, second-rate military, it wasn’t even a fair fight. Well, firstly, so what if it wasn’t fair? It s a war. Secondly, however, nothing could be further than the truth.  They say that air power can’t win wars, but it very near lost if for the British as extremely competent and dedicated Argentine pilots put hole after hole into the British fleet. Every warship bar one that the British sent down with the initial fleet did not survive to the end of the war, being sent home with battle damage or worn out, or simply being sunk. Even the cause of the British victory in the air war (such as it was:  This was perfect proof that kill ratios are not particularly important, as no British aircraft was shot down in air combat, but that still didn’t stop lots of ships getting knocked out) is argued. Some (Sharky Ward, particularly) would say it was the great Sea Harrier and the superior training of British pilots. The RAF would say that the Vulcan raids which resulted in Argentina keeping its fighters over Argentina instead of out fighting the Harriers was the critical point. Others  would say the US was the critical component, by providing the AIM-9L all-aspect Sidewinder. Still others would say it was the Argentinians themselves who squandered the opportunities, that their pilots had their bravery and skill in hitting the British ships wasted by having poorly fused bombs. 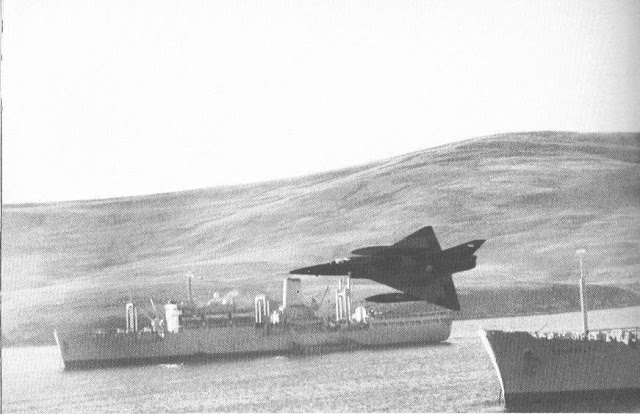 Another misbelief is that Argentinian ground forces didn’t put up much of a fight. Go find a veteran of Goose Green and make such a proposal to him. True, many of the Argentine conscripts didn’t seem all that interested, but that is by no means to say that they all did, or that when they did fight, they were incompetent.  The British assault on Goose Green had basically stalled, it took the serious application of firepower to break the deadlock. It goes on.

You can also use the war for easy case studies for junior leadership. I would wager that most Lieutentants of today will have no idea who LT Keith Mills was. As an ODP (Officer Development Program, basically mentorship of junior officers), give a new infantry Lieutenant a tactical problem along the lines of “You have 22 men. You must defend an island against an invading enemy who outnumbers you, and is equipped with helicopters and naval gunfire support” and see how he reacts. (As an aside, there was an unanticipated result of that fight. Though his men knocked the warship ARA Guerrico out of the war, its missiles were offloaded onto a flatbed trailer, and in an example of Argentine ingenuity, used to knock HMS Glamorgan out of the war later on). What exactly was LTC “H” Jones doing by apparently playing ‘platoon leader’ when he was killed, resulting in his award of the Victoria Cross? I’d not be surprised if the latter question is posed in Sandhurst, but it’s a great question for US subalterns to ponder. 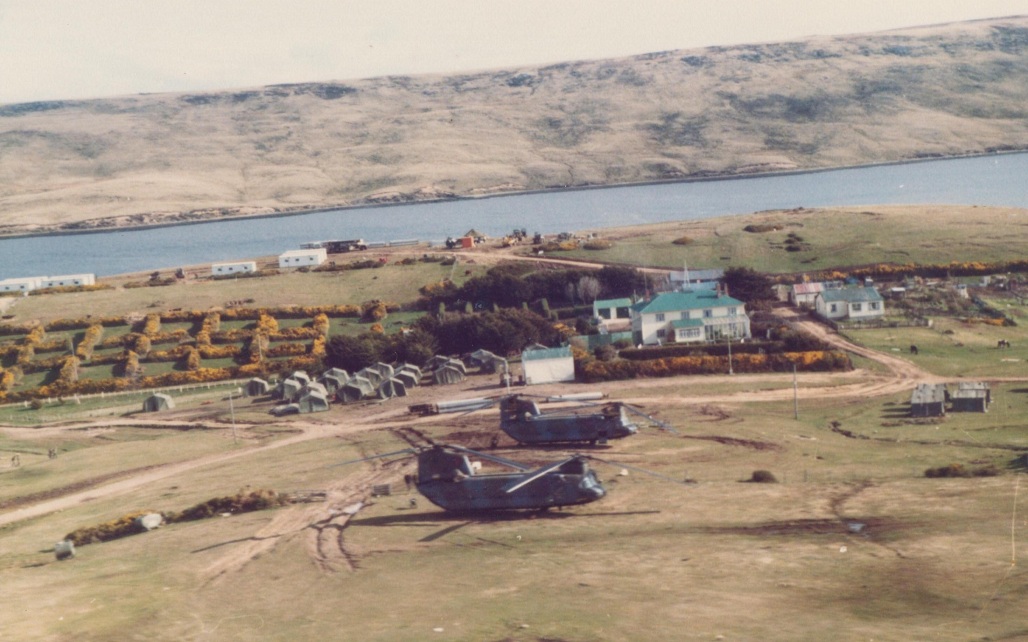 The war also crossed a generational gap in the technological sense. On the one hand, you had airplanes dropping unguided ordnance onto targets, flying directly over them as they shot back with whatever they had, at the same time as anti-ship cruise missiles really came into the public eye in the West. Air-to-air combat was both gun and missile. Royal Navy ships would shoot back with anything from small arms (One civilian was credited with shooting down an A-4 Skyhawk with a 7.62mm machinegun, you won’t see that much any more) through radar-guided missiles, and even laser weapons (One of only two wars that such were used against personnel, before recent treaties banned them: The other being 1991 Kuwait). Anti-tank missiles (MILAN) shared the battlefield with recoilless rifles (Wombats). Battalion-sized units –walked- through the war, from one end of the island to the other… some used helicopters or ships to get around. The British use of WWII-technology straight-running torpedoes worked fine, the  Argentine use of modern wire-guided torpedoes failed because a sailor accidently reversed the polarity of a cable connection during pre-fire checks. A British warship sank an Argentine vessel with a deck gun engagement. Minehunting was done by HMS Alacrity circumnavigating East Falkland, and “doing a bit of zig-zagging” up the Sound. The British fleet consisted of over a hundred civilian ships pressed into service, from QE2 to small freighters. You won’t see that much any more either: The only time anyone’s ever seen a troopship since then, it’s been through the periscope when playing Silent Hunter. 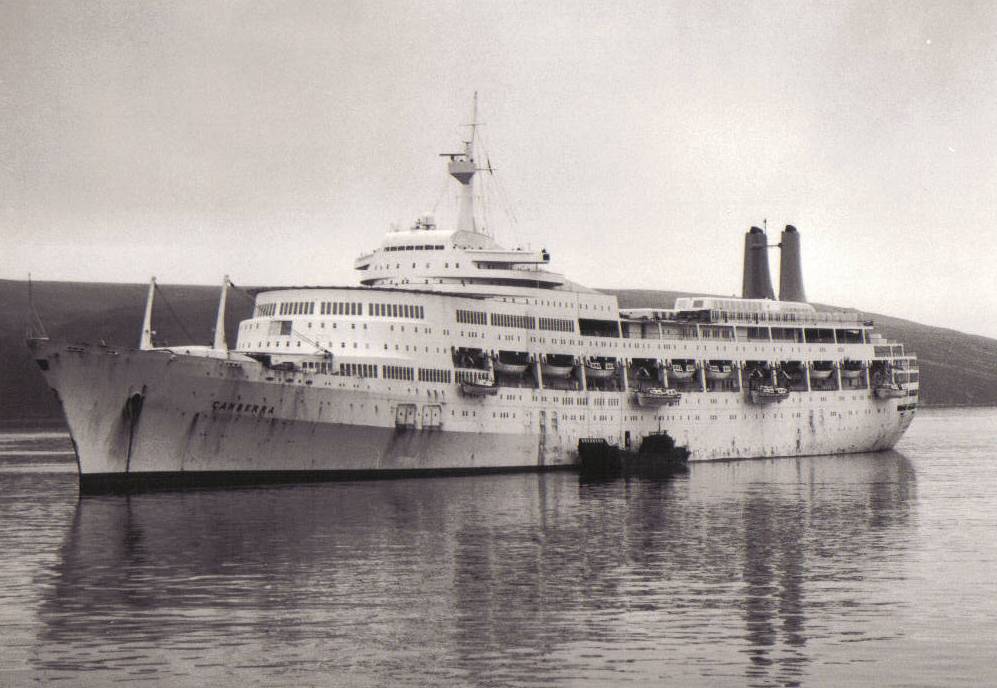 The Falklands War has been called anything from the last vestige of British Imperialism to the extreme example of a government attempting to distract its citizens. It was both an utterly pointless war which should never have been fought, and a war of necessity when all other routes for dispute resolution hadffailed. Perhaps because of this controversy, and the fact that it was fought over a relatively insignificant/out-of-the way area, it doesn’t seem to show up in popular culture much. If anyone can,for example, point me to a movie better than “An Ungentlemanly Act” (Not a bad movie, but a bit limited in scope) I’ll be curious to hear about it. Thirty years is a long time, and perhaps with the ten years of warfare we’re currently in people will get distracted, but considering the amount of effort that people will take into analyzing seventy-year-old WWII battles, some of which were larger than this entire war, I think it is a great shame that a war which has so many lessons which are appropriate for today, from the combined arms interaction through the logistical difficulties of moving men/equipment over rough ground, with satellite communications to home, is not studied more than it is. 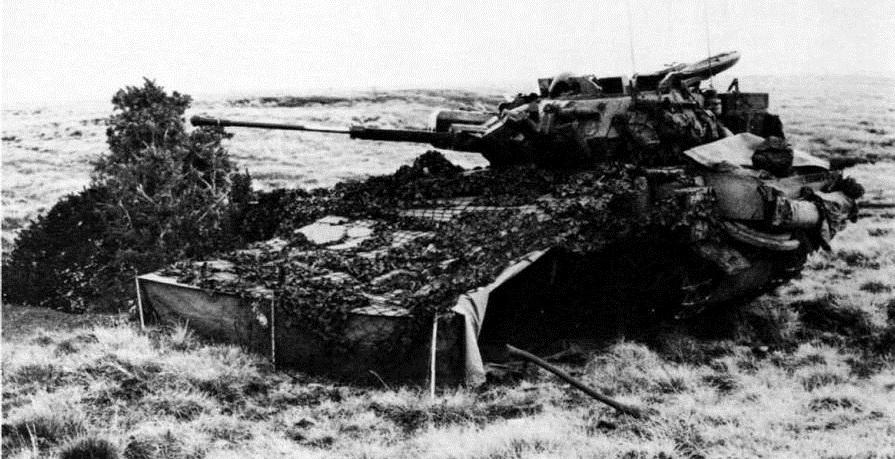 To sign off, since this is World of Tanks, a quick note on armour. There wasn’t much. The British brought along two Scorpions, two Scimitars and a Samson, the Scimitars in particular providing useful fire support to the infantry. The Royal Marines also brought Centurion BARVs. Argentina’s LVTP-7s went home after the initial invasion (with two losses to LAW and recoilless rifle), leaving only AML-90s  as the defending armoured force, and they spent the entire war in Port Stanley. 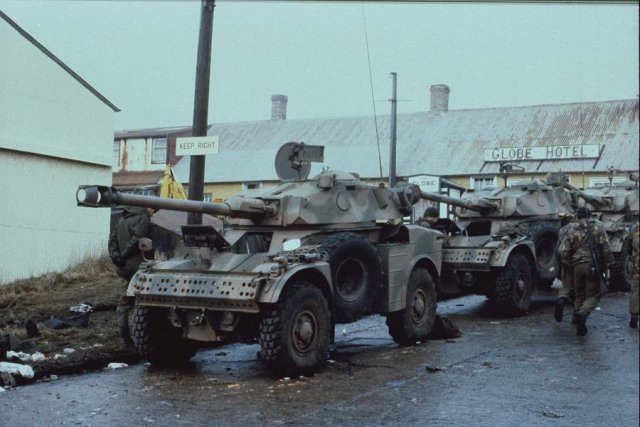 For some bizarre reason, the AML unit did conduct an attack against the advancing British, but they did it dismounted, the attack failed. The one thing that the Falklands probably can’t be used to study is armoured combat. For that, I look to 1973. But that’s another article.