It’s a couple of days early for the New Years’ Message, but since the apocalypse seems to have been cancelled I’ll be ringing in the New Year on duty, wearing ACUs. As a result, this will be the last written Hatch of 2012. I like New Year's, pretty much everyone is partying for the same reason at the same time. Hopefully 2013 will bring me an improved win rate.

It’s certainly been a fun year here. Some of the highlights from my perspective:

Almost a year ago, we gathered together a very knowledgeable group of people. It started out as a whimsical conversation over lunch, and I’m very proud of the end result that came. I truly believe that there is no equivalent to this event, for free or for charge, for anyone with a half-serious interest in tanks. I can’t say it’s exactly taken off like wildfire around the Internet, but anyone who has seen it seems to agree with my assessment. If you haven’t, I do suggest you check it out. It deals with a lot of common questions and pre-conceptions that people who think they know something about tanks don’t actually know. (Excepting the vehicle naming section, see the recent Hatch)

Inside the Chieftain’s Hatch also kicked off. A pet project of mine, and thanks to Wargaming America for letting me run with it, I think it fills in a void in publicly accessible tank knowledge.  The three trial episodes we filmed have given us feedback to work with, and you should be seeing a number of improvements in batch #2, and some significant new sequences by the third group. Hopefully you’ll enjoy watching them as much as I enjoy making them. (Except you guys don’t have a blooper reel of your side of the monitor). Hopefully you will also have enjoyed reading the regular written Hatch articles, and thanks to the guest authors who have contributed.

I can finally say we’ve achieved some success with the in-game vehicles. M36 finally has the proper name and gun depression! The GAA isn’t sorted out yet, but it’s still on the radar. The various new nations and vehicles have enriched the game and the discussions which surround it. Glad to see the Brits were able to join us. For once it’s not the Americans late to the fight.

Most of you will have seen the FPS Russia videos of the M5 and M18. Definitely some memories there, to include being blasted by debris when we killed the ‘hut’ at perhaps a closer range than was wise. I, foolishly, had my head above the armour on that one, got away with nothing more than a splinter cut above my lip. Lesson learned. But it’s not every day you get to fire a live WW2 cannon. 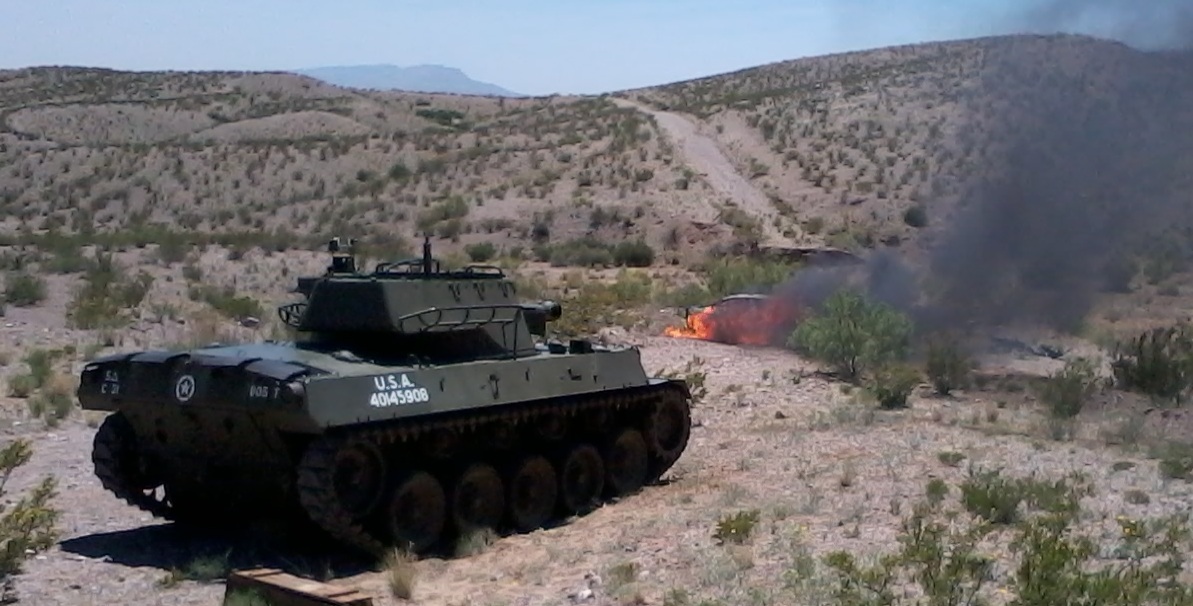 We didn't actually intend to set the car on fire. Made it difficult to clean up afterwards. The M18 shoot also brought me to Albuquerque, and another nice thing to look back on. Meeting all the folks out there, even in more unusual places. The policy is that if I go somewhere on business, I meet up with you. Special shout-outs to the largest gathering (Danville, VA) who were good enough sports to get into formation to help get a count (over 100) 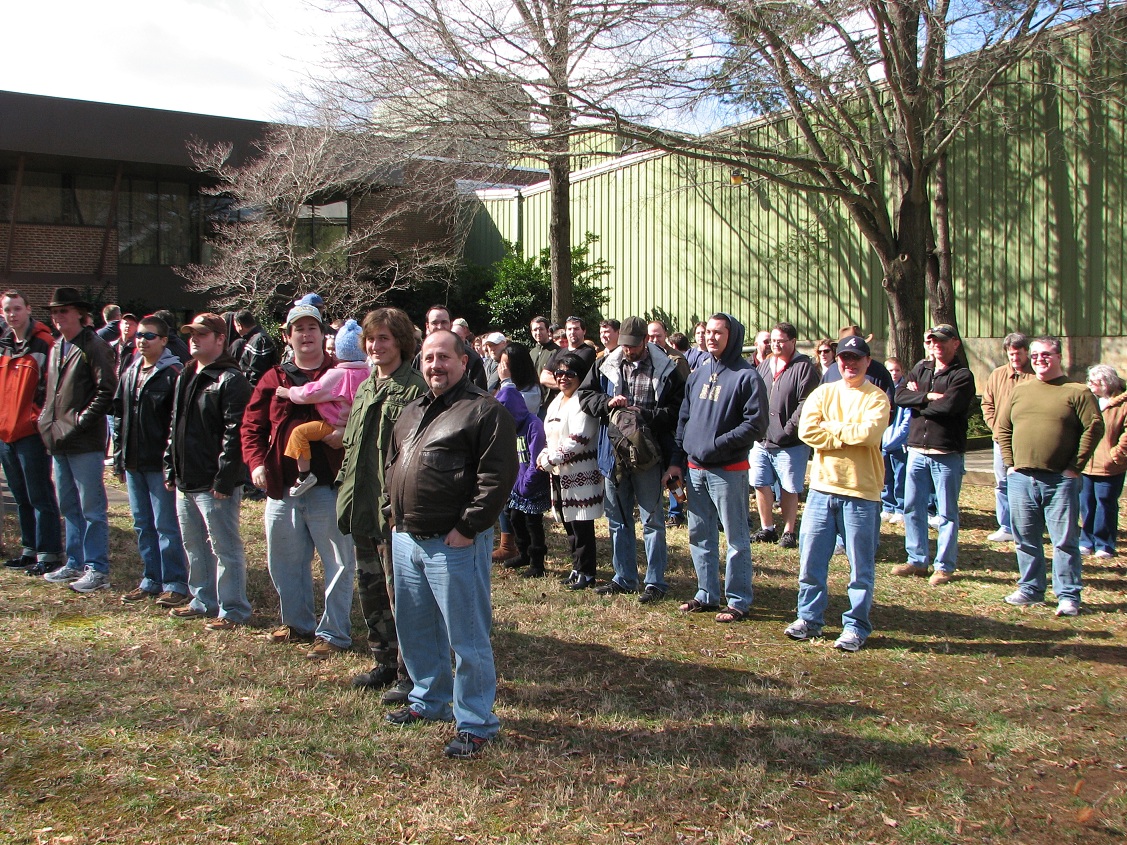 and the most fun (Atlanta, GA). 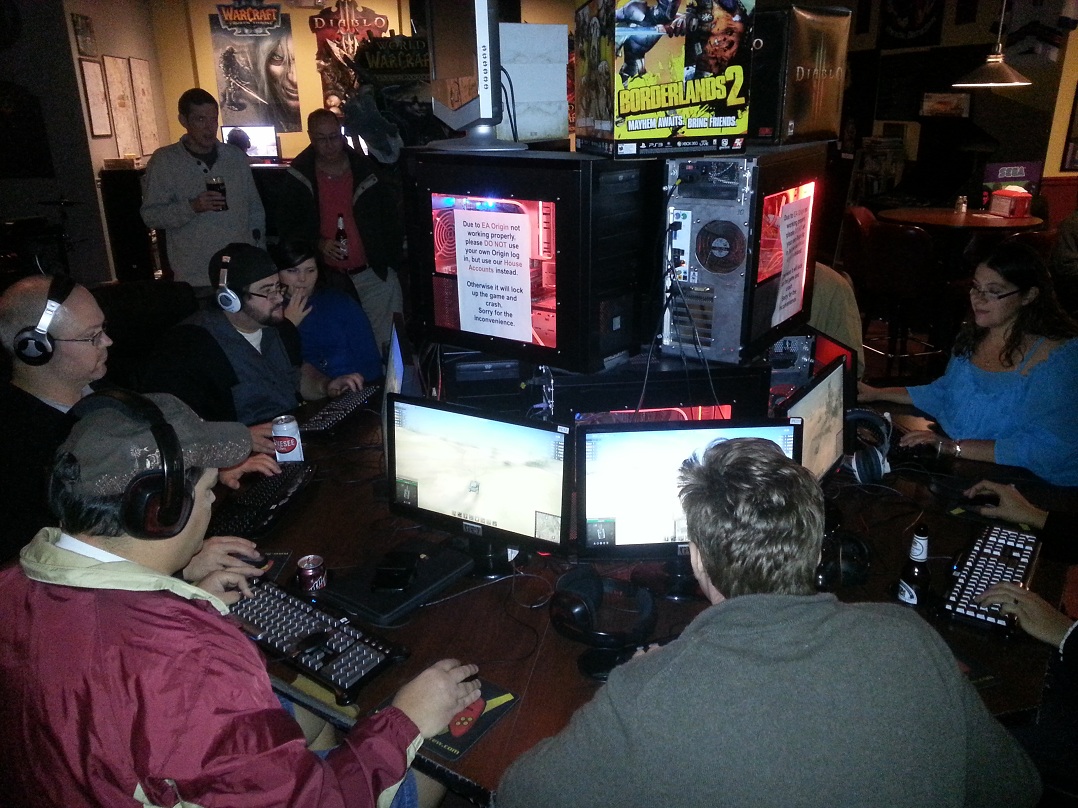 That brings me to the best part of this. I have never before worked in an environment such as this, and you guys have been a heck of a lot of fun to interact with. Your dedication is impressive (particularly the lads who travelled overnight just to meet up with other players) and most of you are not what one thinks of as the ‘typical’ gamer. I have meet multiple generations of player in the same family, granddad to grandson, husband/wife teams, and I am unaware of any Wargaming America member who has had anything but a great experience meeting you guys. Our discussions have gone from wondrous or bizarre moments in World of Tanks, through discussion on tank technical specifications, to heated debates over which pony is best pony. On that note, another special shout-out to the lads on the Epic Thread, which was barely 40 pages old last New Year, and should almost certainly break 2,200 by next Tuesday. Checking in has become a ritual, I suspect I am not alone. It’s the people that count.

Which brings us to what is quite probably the most unique reflection of the year.  The charity drives. I really don’t know of any other gaming community which has done this, and I think you guys have set an incredible example by diving in. We got off to a great start on the ANZAC day weekend, and I had the privilege of announcing in person to NZ’s RSA and AU’s Legacy the tallies. It was impressive enough to make the national news in Kiwiland, and after the Legacy announcement, one of the players who was present said that the old veteran who was sitting next to him grabbed his arm in shock. 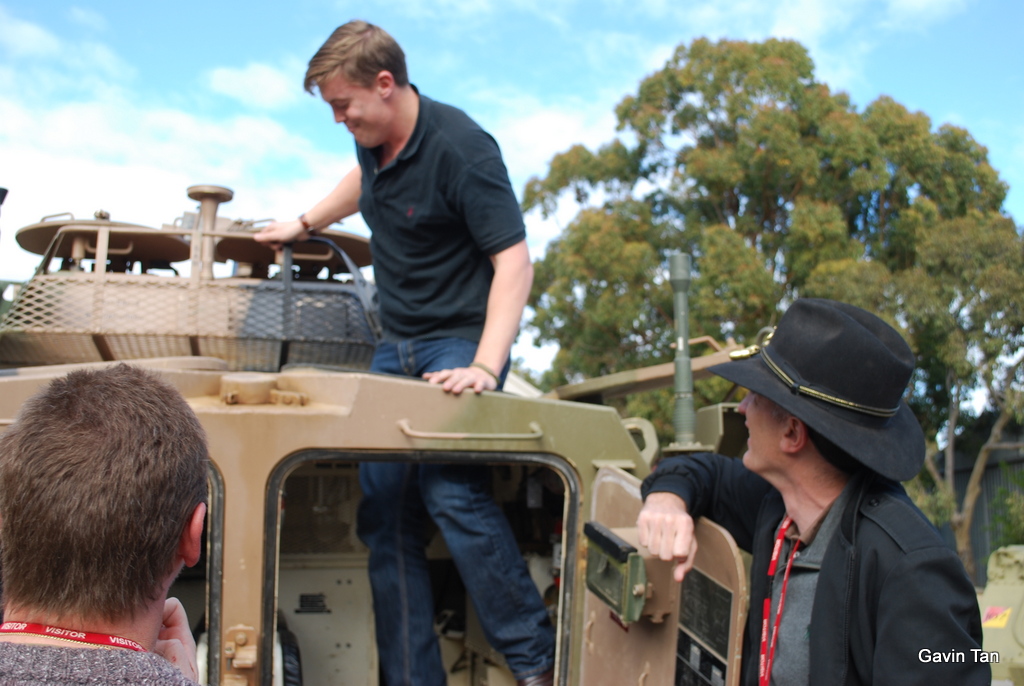 (The Aussies also put on the most hands-on gathering: Photocredit Buzzpuppy)

I tell you this to try to express the size of the achievement you have managed. All told, throughout the year you guys raised over $380,000 for military charities. I think that’s incredible considering the size of our server compared to some others, and I think it is a reflection of the make-up of this community. As a soldier, I have to tip my hat to you in appreciation. As a Wargaming America employee, I do it in respect.

The traditional New Year’s song begins “Should old acquaintance be forgot?” Bit of a rhetorical question, really. It’s the new acquaintance we should be more concerned about, and since obviously they haven’t been made yet, they’re not going to be reading this. But if those we meet in the Wargaming community are anything like those I have been acquainted with in 2012, especially as we start to expand to the realms of air and maybe sea, bring on 2013.

The last time I was working at the stroke of midnight New Year’s Eve was 2009/2010, I spent it on a FOB in Afghanistan watching 155mm and 120mm rounds being fired (not at anyone, but the registration exercise was the closest we had to fireworks). In 2004/2005, I spent it on my tank in a motor pool in LSA Anaconda awaiting the arrival of some M1070s to take us to the fight in Mosul. 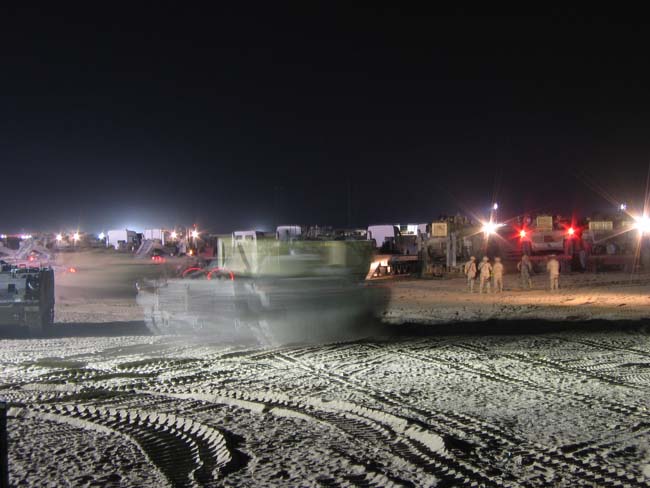 (Photocredit: E Penick, one of my gunners)

So this will be three years out of ten I’ll be on watch and it’s an immediate reminder to me that every year people spend midnight at work for others. Many of you will have friends or relatives in a similar situation in your various countries, be they military or emergency services. Maybe some in colder climes will be electrical engineers, out in the storms trying to restore power so others may enjoy their New Year parties. If you know someone of that description, please know they have our thanks, and hope that 2013 will see them home and safely through to 2014.

See you next year.